China and India have divided the Moon and Mars

December 9 2013
31
Once, the Americans watched in amazement as the USSR exploded into space, and could not understand how it happened that they were overtaken by a country that had recently been in ruins after a terrible war. 2013 is in the courtyard of the year, and China is sending a rocket into space with a moon rover on board, and India is launching a space probe designed to study the Martian surface. Against this background, Russians have feelings similar to Americans (60-year-old). And the jokes that a Chinese rocket was shot down over the territory of Russia: “The pilot was caught, but the fireman escaped,” became an anachronism.


Prospects for Asian space programs were discussed by the well-known Russian journalist Andrei Parshev, the author of the book “Why Russia is not America” and many others. According to him, first of all, such space programs of India and China are aimed at strengthening and increasing the prestige of states, because the practical benefits of such flights are not obvious, although they have certain benefits for the development of science. Information and materials from the surface of Mars and the Moon are likely to be of practical value to scientists.

At the same time, it is absolutely clear that those states that are able to conduct research on the planets of the solar system are at a very high level of development that is inaccessible to many countries. In this light, the prestige of our country is heavily beaten by the fact that our own Martian expedition Phobos-Grunt ended in failure. In case of success of the Chinese lunar rover, it can be stated that the prestige of the country was put at the forefront. It is obvious that the Chinese are unlikely to be able to find on the Moon something unusual and not yet known to science after the programs that were implemented by the USA and the USSR in the last century. 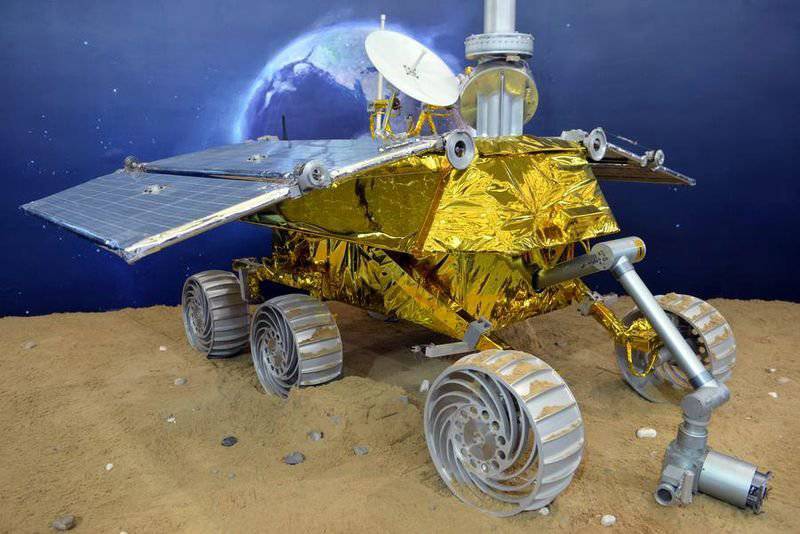 The PRC announced the launch of the first in its own stories spacecraft to the natural satellite of our planet. If the spacecraft successfully runs on the Moon, China will become the 3-th country in the world that was able to take samples of the lunar soil. New Chinese milestone in space exploration coincided with another historical event. At the same time, India launched its own probe to explore the Red Planet. The growing competition between Delhi and Beijing could be the reason for the redistribution of the multi-billion dollar market for space services and technologies.

The spacecraft called “Chang'-3” with the “Yuytu” lunar rover (from the Chinese. - “The Jade Hare”) was launched from the Xichan cosmodrome, located in the Sichuan province, on the night of December 3. During 2 weeks, the moon rover must land on the lunar surface in the territory of the Rainbow Bay. The goal is to take samples of lunar soil there, as well as carry out mineral exploration and conduct a number of other scientific studies. The first lunar rover in the history of China was sent to space in 6 years after Beijing took its first step in exploring the moon: in 2007, the “Chang'-1” apparatus was launched into the moon's orbit, the main purpose of which was to photograph the lunar surface. The next logical step after sending the lunar rover is to send a Chinese astronaut to the moon. Experts believe that this may happen after the 2020 year.

The launch of the “Yuytu” moon rover allowed China to enter the top three countries (together with the USA and the USSR), which sent their aircraft to the Moon. Up to this point, the last lunar mission was the Soviet "Luna-24", which was carried out back in 1976 year. Still lagging behind in the space race from Russia and the United States, over the past 20 years, China has invested 20 billion dollars in space exploration, which allowed the country to make a real breakthrough by entering the world space race for the 3 space. 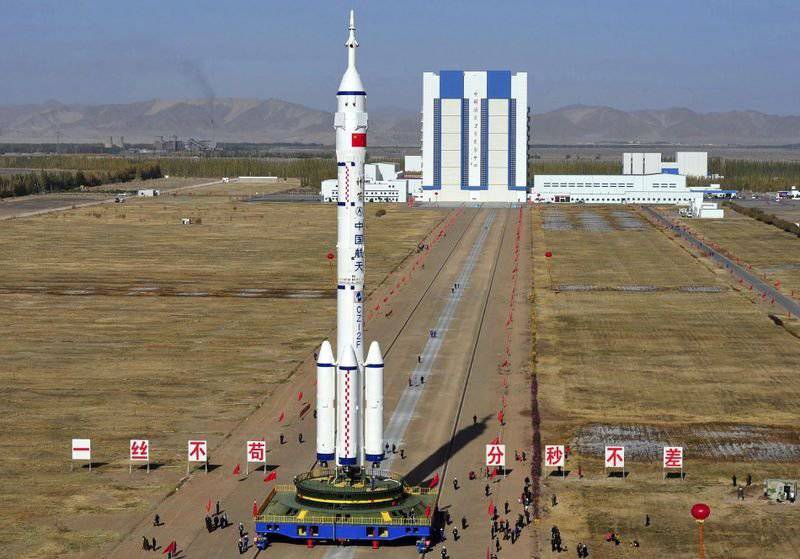 Long March II rocket at the Jiuquan cosmodrome
At the same time, the media report on the launch of the first Chinese lunar rover almost coincided with news about another ambitious space project being implemented in Asia. The space probe "Mangalyan", which was launched by India in early November 2013, is designed to conduct research on the Martian surface. This probe has already left Earth orbit and is on a flight path to Mars. Having crossed 680 million kilometers, the probe should reach the Martian orbit in September 2014.

If the Indian mission to Mars is a success, India will become the first country in Asia to join the international club of Mars researchers (currently the United States, Russia and ESA). It is noteworthy that Beijing also tried to implement a similar project in 2011, but it failed. Due to this, lagging behind the Middle Kingdom in the development of the space industry as a whole, India can get ahead of its competitor in such a large-scale project as the study of Mars.

As the interest in the implementation of new, rather ambitious projects from the United States, as well as Russia, decreases, the world space race is moving to Asia through the efforts of India and China. At the same time, as experts note, a surge of interest in the development of space is associated not only with the general development of the economies of these states, but also with the tasks of national prestige, of asserting their new global status in the world. So says Rajeshwari Rajagopalan - an expert of the Observer Research Foundation in Delhi.

Martian probe
According to Madame Rajagopalan, although there is no direct link between the “Mars mission” of India and the “lunar mission” of the PRC, both missions need to be viewed in the general context of the intensifying competition of 2's of the leading Asian countries, which increasingly affects the space industry. The result of this rivalry may be the possible future redistribution of the global market for space technologies and services, which is estimated at billions of dollars, in favor of the leading Asian countries. At the same time, the cost of the Martian project Delhi is estimated at 72 million dollars, which is 6-7 times less than the cost of similar projects NASA, said Rajagopalan. According to the expert, this may be an important factor that will contribute to the displacement of the global space race in the Asian region.

The PRC space program officially begins in 1956. For 14 years with the help of the USSR, the necessary production was formed here. In 1970, China successfully launched its first satellite, Dongfang Hung-1, which added China to the number of space powers. At the same time, the development of a manned spacecraft is considered the most difficult task in the space program today. China became the 3 state in the world (after the USSR / Russia and the USA), having its own manned spacecraft.

October 15 2003 of the year Yang Liwei - the first in the history of China astronaut (taikonavt) - in less than a day made 14 orbits around our planet on a Chinese replica of the Russian spacecraft "Soyuz" (Shenzhou-5) and returned safely back to Earth on a descent module . By 2013, the 4 spaceport was built on the territory of the PRC, each of which has several launch sites.

To date, one of the most ambitious programs of the Middle Kingdom is the creation of a heavy launch vehicle of the “Great March 5” series, the program was launched in the 2001 year. Three-stage CZ-5 rockets with a length of more than 60 meters will be able to put up to 25 tons of payload into orbit. The first launch of the rocket is scheduled for 2014 year. Also from the year 2000 in the People's Republic of China, the national satellite navigation system Beidou / Compass (like GPS and GLONASS) is being developed. The system operates at a frequency of 1516 MHz. To complete the deployment of the space constellation of satellites is planned for the 2020 year. By the end of 2012, 16 satellites were already in orbit. 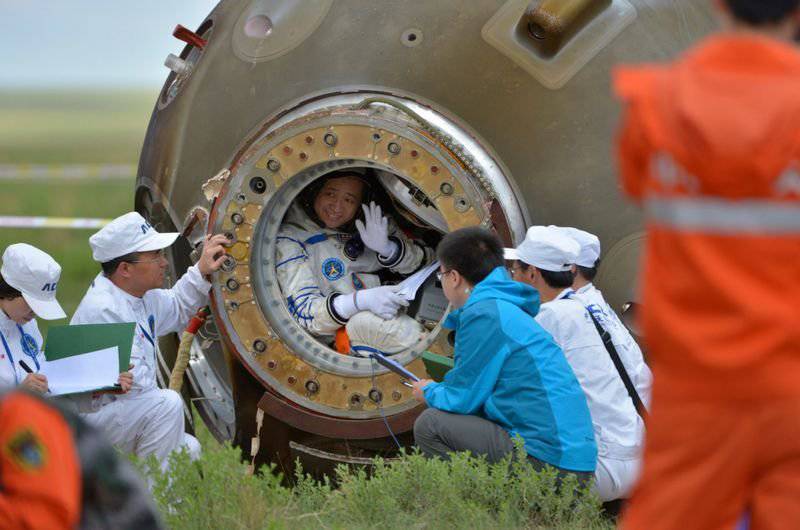 In parallel with this, Beijing is actively funding two more large-scale space projects. Thus, Tsinghua University and the Chinese Academy of Sciences are completing joint work on the creation of the HXMT Observatory - the Hard X-ray Modulation Telescope, which is planned to be put into orbit in 2014-2016. At the same time, work is underway to create a huge solar telescope (CGST), which will become the largest telescope created to conduct observations of the Sun in the optical and infrared range. The main purpose of his creation is to study the phenomena of the atmosphere of a celestial body and its high-resolution magnetic field. The estimated cost of building such a telescope is 90 million dollars. Start of work is scheduled for 2016 year. At the same time, China’s ambitions and funding for the space industry are growing annually. By 2020, China expects to build its own orbital station, and in the distant future - to carry out manned missions to the Moon and Mars.

At present, India is the 6-i space power, which in the coming years may well press Japan and the EU in this race. Already, the country is able to independently launch communication satellites into geostationary orbit, has its own returnable spacecraft and automatic interplanetary stations (AMC), and is also engaged in concluding international agreements, providing its launch sites and launch vehicles. The plans of the Indian Space Agency (ISRO) - building its own rover. In parallel with this, the ambitious project of the space transport system called Avatar is being developed.

The Indian Space Agency, ISRO, was formed in 1969 in the process of absorbing the National Space Research Committee. The first satellite called "Aryabhata" Delhi launched with the help of the USSR in 1975 year. After another 5 years, the Rohini satellite was launched into Earth orbit using its own SLV-3 launch vehicle. Over time, two more types of launch vehicles were developed in India, which are used to bring satellites into geosynchronous and polar orbits. In 2008, India, using the PSLV-XL rocket, sent AMC Chandrayaan-1 to the moon. Exactly half of the 12 located on board the station of scientific instruments was created in ISRO 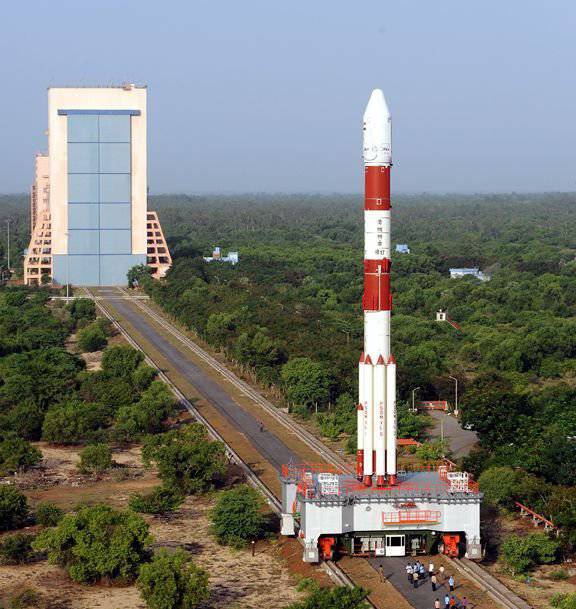 PSLV-XL rocket at the Indian cosmodrome on Sriharikot island
It is worth noting the fact that the space program of India is actively helping to implement supercomputers. With their help, the most successful engineering solutions are worked out, models and situations are modeled on them. Since 2012, India has used the SAGA supercomputer, which is the most powerful in the country and is among the first hundred of the most powerful supercomputers on the planet. It is based on Nvidia Tesla's 640 accelerators and is able to provide peak performance at the level of 394 teraflops. So India successfully participates not only in the space, but also in the supercomputer race. At the same time investing in these areas billions of dollars. Currently, India does not have its own manned space flight program, but by the year of 2016 ISRO is going to fix it.

Ctrl Enter
Noticed oshЫbku Highlight text and press. Ctrl + Enter
We are
Forty-fifth Expedition to MarsMars flight canceled
31 comment
Information
Dear reader, to leave comments on the publication, you must to register.