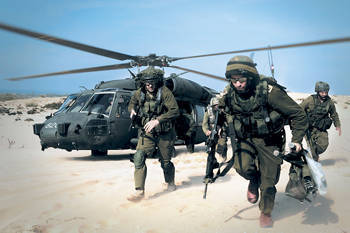 In Israel for more than 30 years, the most intellectually advanced recruits of both sexes are selected for service in the elite division of Talpiot.

This word is not so easy to translate. Undoubtedly, it is taken from the verse of the immortal biblical "Song of Songs" attributed to the legendary king Solomon. "Tel" is translated as "hill", and "piyot" - "mouth". It turns out like a hill on which all the lips turn to prayer. However, in Israeli army slang, "talpiot" means "elite." It is not surprising that the curriculum was called just such a word in the IDF (Israel Defense Forces), which allows, according to its developers, “to use local intellectuals of draft age not only muscles, but also brains”.

The elite division of Talpiyot was created in 1979 by the initiative of Brig. Gen. Stock General Aaron Beit-Halahmi. Moreover, the “star ensemble of army intellectuals” was not formed immediately. As Beit-Halakhmi himself says, back in 1974, he was approached by two professors from Hebrew (Hebrew) University and offered to create a training program that would concentrate the efforts of the most capable of new recruits. It was assumed that these young people will be able to develop the most advanced technologies for the IDF. The preparatory work continued for five long years. Beit-Halakhmi does not hide that he had to overcome a lot of bureaucratic obstacles. Opponents of the formation of "Talpiyot" argued that it does not make sense to involve young people in scientific work in the army structures immediately after school, even if they are very talented, but did not have time to get a fundamental education at universities or colleges. However, Beit Halakhmi and his associates considered it necessary to orient talented young people to research in the military fields at the age of conscription. This idea was actively supported by Lieutenant-General Raphael (Rapoul) Eitan (1978 – 1929), who had taken over the leadership of the IDF General Staff in 2004, by the way, the son of the natives of Russia, whose real name is Orlov. It was he who gave - I ask you to pay attention to the duration - the nine-year program of training army "stars" with the green light.

It is clear that, taking into account the fact that the term of military service in Israel was three years for young men and two years for girls, the selected “stars” were actually engaged in university programs and the completion of service coincided with their higher education. Moreover, many "star" cadets of the program "Talpiot" stepped over the first bachelor's degree and immediately became masters and doctors.

During the 32 years under the Talpiot program, created under the auspices of the Air Force and the Development Administration weapons and the technological industry (UROITP), were trained annually and conducted research from 25 to 30 recruits, both boys and girls. Candidates selected for this program were supposed to demonstrate not only the highest IQ rating, but also strong motivation, as well as undoubted leadership qualities. Most recruits who expect to get into this program are already arriving for exams with "outstanding school recommendations."

According to Beit-Halakhmi, “every year only 1,5% of thousands of army recruits with the same“ outstanding recommendations ”are accepted for the Talpiot program. How can one fail to recall the phrase that Sun Lutan (1860 – 1933), the famous master of the internal school of Chinese martial arts, who became an aphorism: “Finding a good teacher is not easy, finding a good student is even more difficult.”

John Hasten, an expert in the field of elite military training programs, the author of the article “The Talpiot”, published in the Jerusalem Post in Israel, says that “there are no more such programs in the world”.

FROM ARMY TO PROFESSOR

Information about the military developments of those who have completed the Talpiot program is classified. Otherwise it could not be - the army is obliged to keep its secrets. Nevertheless, the quality and significance of these developments can be judged indirectly by the achievements of graduates of these nine-year programs in areas of purely civilian, because not all graduates wished to remain military all their lives. So, Guy Shinar, now a prominent researcher of biological systems, who received his doctorate in physics at the famous Chaim Weizmann Institute of Science in Rehovot, a city considered to be an Israeli Cambridge and Oxford at the same time, is also a pet "Talpiot". Dr. Shinar is a member of the boards of directors of several well-known Israeli companies engaged in the development and production of medical devices used around the world.

In the 2005 year, when Shinar was 28 years old, he had just been demobilized, completing the Talpiot program. In the same year, this young man immediately founded a successful company for the production of devices that monitor the vital functions of the patient's body without the help of electrodes. Such a device, placed under the mattress on which the patient lies, can determine the pulse rate, respiratory parameters and other important indicators of human activity.

Dr. Shinar directly says that participation in the Talpiot program played a significant role in his successful career as a scientist. In a conversation with Josh Hasten, Shinar stressed that it was thanks to this program that he was able to choose for himself and the field of professional activity. "If you intend to work in the field of medical instrumentation, you need to become a specialist in a wide field, learn to excel in various disciplines, including clinical science, medical engineering, physiology, and even the problems of intellectual property rights."

According to Shinar, the first three years and three months of the “young” recruits of “Talpiyot” are spent on completing a bachelor’s degree in physics or mathematics from the Hebrew University program. Next, the soldiers go through the one and a half year military training program not in one, but in several units, including the paratroopers, the Air Force, the navy and intelligence. Upon completion of this stage of training, actual graduates are given the military rank of lieutenant and the remaining service time (out of nine years), they are engaged exclusively in research and, if necessary, in production activities. Dr. Shinar emphasizes that, firstly, the cadets of “Talpiot” were engaged in research activities and not being officers, and secondly, having received officer ranks, these same cadets are promoted to the highest positions in intelligence units, the Air Force and some other parts . So, the same doctor Guy Shinar at the age of 22 years began to serve in UROITP.

Shinar's fellow student, information about which is completely classified, at the same age performed very important works in the field of precision engineering. However, according to Shinar, the majority of graduates of "Talpiot" conduct research in the field of biotechnology, medical and other types of instrument-making.

Dr. Ofer Goldberg, who completed the Talpiot program a year later, is currently holding the position of vice president of Clal Biotechnology (General Technologies), one of the largest international companies in the 10 top list of the most successful companies of this type. . This company specializes in pharmaceuticals and invests in new medical technologies. Like Shinar, Goldberg believes that his career could take place only due to the fact that he got on the program "Talpiot".

“When I professionally study the scientific validity and feasibility of modern technologies for medicine,” says Ofer Goldberg, “I use the analytical methods and skills I learned while taking the Talpiot program.” Indeed, this program is focused on basic systems of interdisciplinary importance. Therefore, Goldberg continues his thought with these words: “I checked the innovations in the army in accordance with military affairs, and now that area of ​​technology that I directly deal with.”

Dr. Goldberg uses the term “Talpiot factor” when he emphasizes the dependence of achievements or the career success of a graduate who has completed this challenging nine-year course. He gives a curious example. When he, as a vice-president of the company, was offered to invest a lot of money in one company that studies the problems of cardiology, he accepted this offer not least because the director of this company is a graduate of Talpiot.

Ofer Goldberg is proud that his company is based on patriotic principles. He says: "In addition to practical reasons, the fact that the company operates in Israel is of particular importance to us."

“WHO AMAZED, THAT WON”

This famous maxim, belonging to the great Russian commander Alexander Vasilyevich Suvorov, sounds particularly relevant today. It is clear that in the confrontation with the enemy priority is given to the human factor. But you can’t defeat a serious enemy with your bare hands or with antediluvian weapons. In our time of total computerization, it is young people who have barely stepped over adolescence to take the technological innovations in the best way. Therefore, it is clear that they should be involved in this kind of development. More precisely not all, but the most talented of them, giving special hopes.

It is interesting that in the XX century the first attempt to create elite intellectual army units capable of doing research was made in the early 20s by the commander of the land units of the Reichswehr (German armed forces in 1919-1935, quantitatively and qualitatively limited by the terms of the 1919 Versailles Peace Treaty ) General Hans von Sect (1866–1936). He initiated the creation of research laboratories for talented military personnel who proved themselves in scientific work. He was supported by some military, politicians and scientists. However, the growing chauvinist German circles didn’t like it when it turned out that Zekt’s idea was supported by Jews of origin - Admiral Fritz Haber, director of the Institute of Physical Chemistry, Nobel laureate, German Foreign Minister Walter Rathenau and Felix Teilhaber, medical officer, one of the pioneers aviation medicine.

Today, the command of the armed forces of a number of countries sets the task of creating army scientific units. However, in armies formed exclusively on a contract basis, it is impossible to attract specially gifted “in relation to the sciences” 18-summer recruits for these purposes. And the reasons are obvious. First, because there are practically no such and never will be. After all, if in the country there is no compulsory recruitment, then the “especially gifted” who have completed school education will prefer receiving higher education to the military service. True, it is quite possible to attract contract servicemen to army research units. But, as they say, it will be "a completely different calico." Indeed, in one army of the world contract soldiers are not represented by boys. This is the second. So the severity of scientific perception in any case will be different. Thirdly, it is highly doubtful that young people with very high IQ will be recruited into the army for the soldiers' service. It does not happen, after all, the usual muscular guys who do not claim Nobel Prize prefer to strap a soldier's shoulder strap.

As for "Talpiyot", then such programs are quite possible in the armies, formed by conscription. For example, in the Russian army. It is not surprising that an article with a pretentious title appeared recently in a Moscow newspaper: “Soldiers-scientists will appear in the army”. The subtitle of this article is even more impressive - “The armed forces will be raised from conscripts of Nobel laureates.” And after all, in principle, this can not be excluded.

Defense Minister Sergei Shoigu gave a direct order to create "scientific companies" in the Russian armed forces, which, he said, would contribute to "the formation of a new generation of people moving military science."

Ctrl Enter
Noticed oshЫbku Highlight text and press. Ctrl + Enter
We are
IDF declared war on suicideHow are the "scientific company" in Israel
15 comments
Information
Dear reader, to leave comments on the publication, you must to register.