December 6 2013
0
В aviation a lot depends on the weather. Weather intelligence is divided into ground and air. For air reconnaissance, special aircraft are used. For example, in the USSR, one of such aircraft was the MiG-25MR, which was intended for meteorological observations and differed from other machines with specialized equipment installed on board. Often, machines that had exhausted their combat potential were converted into weather reconnaissance aircraft. In the United States, this was done with the wonderful B-29 Superfortress bomber, as well as its post-war modification B-50. It is about the latter that will be discussed later.


Even during World War II, Boeing bombers became the main striking force of American strategic aviation. Even before the Japanese attack on the American base fleet Pearl Harbor was armed with the B-17 “Flying Fortress” aircraft, and since 1943, B-29 bombers, known as the “Super Fortress”, have been increasingly used in combat missions.

At the same time, the military even then did not satisfy, and now does not satisfy, the characteristics of the existing models. The military would like to have even more sophisticated and powerful aircraft in service. The same happened with the command of the US Air Force, which wanted to have at its disposal an improved version of the B-29 aircraft, which would be distinguished by an even greater bomb load. Work on the new aircraft (the project received the designation HV-44) started in 1944 year. Soon the new strategic bomber was renamed the XB-290, and later the B-50. It was under this designation machine and entered history. From the B-29 bomber, the new aircraft was notable for its advanced, much more powerful Pratt-Whitney R-4360-35 engines, which developed power up to 3500 hp. each, as well as the use in the design of a new aluminum alloy. The plane turned out to be 18 tons heavier than its predecessor, while the appearance of the machine is practically no different from each other. In the air, the plane could be easily identified by its fairly high keel (the height is 1,52 meters higher than that of the first Super Fortress). 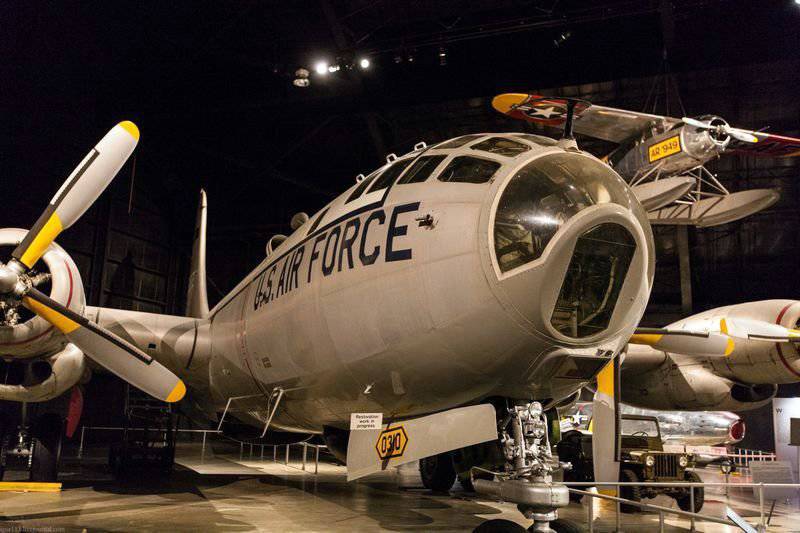 At the same time, the B-50 bombers did not long form the basis of the air fleet of the Strategic Air Command of the US Air Force. The peak of the service of the machines came in a very short period of time - the 1951-52 years, when the Air Force had 220 B-50A and B-50D bombers. After that, they were rather quickly superseded by the reactive B-47 models. Soviet MIG-15 fighters contributed to the rapid decline of these piston bombers, and during the Korean war the American “Super Fortresses” were well patched, forcing the United States to switch only to their nightly use and later to withdraw from the theater of operations.

So that the already built aircraft were not in vain, some of them were converted into highly specialized machines. One of these variations was the weather intelligence officer WB-50D, built on the basis of the B-50D bomber. A total of about 69 aircraft were manufactured in this modification. From the special equipment, the locators AN / AMQ-7 and AN / APN-82 were mounted on them. The prototype of the aircraft was circled in the 1955 year, and after 4, the 69 aircraft of this type were already in the service of weather reconnaissance by the US Air Force. They made their flights over the territory of the United States, England and the Pacific Ocean.

As part of the USAF, these cars in the middle of the 50 of the twentieth century replaced the WB-29, which were created, as you might guess, on the basis of the B-29 bomber. By the time the WB-50D was replaced, these machines had already begun to suffer from the effects of corrosion. The contract for the conversion of bombers into aircraft for tracking the weather went to the American company Lockheed Aircraft Corporation. Previously, all their defensive weapons were dismantled from the aircraft. 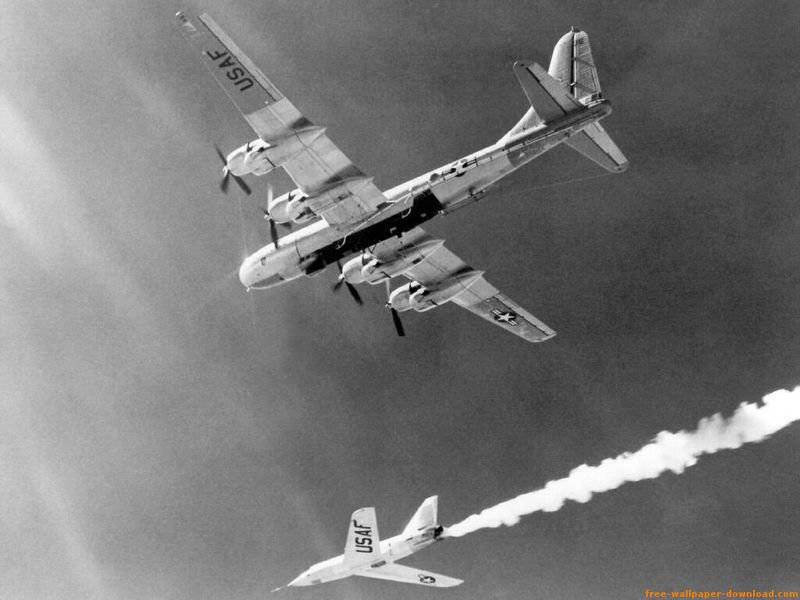 The WB-50D aircraft was installed a set of the best flight-navigation equipment, it included AN / APN-82 - an automatic navigator, which was a radar designed to measure the speed and displacement of the aircraft relative to the surface of the earth, and ANQ-7 - indicator humidity and air temperature. The plane also received an ML-313 Psychrometer, an improved altimeter and artificial horizon. At the same time, it was much more difficult to mount new equipment on the plane than previously planned, so Lockheed was not able to meet the approved schedules.

The first flight of its aircraft WB-50D made 20 August 1955 year. In November of the same year, the aircraft entered service in the Air Weather Service. Many of the aircraft of this series carried on board a special air sampling system. A distinctive feature of such aircraft WB-50D was an air intake, which was located in the upper aft fuselage and was made in the form of a scoop. This facility was designed to collect weather information as well as air samples to determine its level of radioactivity. Such aircraft were often used for reconnaissance purposes after nuclear testing. weapons (air and ground), which were carried out by other states.

The aircraft served in the US Air Force longer than originally planned. In the 1960 year, after a number of problems with fuel tanks occurred, the 28 flights of the WB-50D aircraft were suspended. As a result, most aircraft were equipped with new or additional fuel cells. After the improvement of the fuel system, the aircraft continued their service in the Air Force. The collapse of the WB-50D aircraft financing program began at the end of 1963. The last such aircraft "retired" in 1967, after which it turned out to be in a museum in the city of Dayton. The rest of the machines are much less fortunate: many of them went for scrap. In the military, the aircraft gave way to new jet models WB-47 and WC-135. 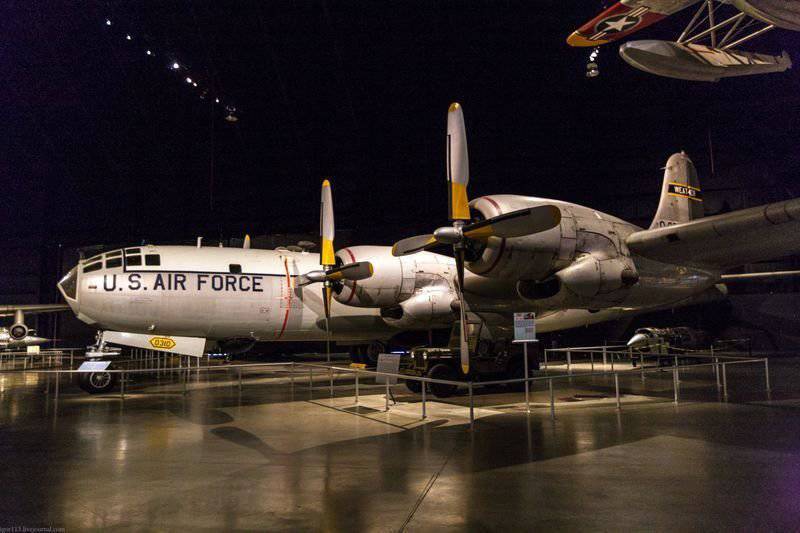 In aviation, weather is conducted every day, since the readiness of the airfield depends on the weather. For these purposes, there are meteorological services in the composition of connections and parts that monitor the weather changes around the clock. On the day of the first flight, a reconnaissance plane (or helicopter) always rises to the sky, which performs visual monitoring of the weather conditions. Usually used for these purposes aircraft with two or more crew members.

Scheduled flights in the Air Force always begin with weather intelligence. Such a flight is called “weather intelligence”. It is usually performed in 1 - 1,5 hours before the start of flights with an estimated reconnaissance time of about 30-40 minutes. The execution of the flight for the exploration of the weather is preceded by the decision of the regiment commander (part). Previously, the chiefs of various services, including meteorological, report the situation. Aeronautical meteorologists report actual weather on their own and at the alternate aerodrome (according to ground observations), give out weather forecasts for the time of weather survey and flight shift.

Weather intelligence is carried out comprehensively, according to the flight program. It is carried out not only in the area of ​​the airfield, but also in the zone of ground test sites, flight routes, with a set of piloting heights in certain flight zones. The purpose of reconnaissance is to determine the ability to perform pilotage, to perform air battles and interceptions (including over the clouds), flights to combat use, and landings.

In addition, weather reconnaissance aircraft determine the behavior of the machine by the degree of icing in the clouds, atmospheric turbulence, calculate the drift angles on the combat and landing courses, the behavior of the aircraft on the runway and run, the chassis grip from the runway, and many other parameters important for ensuring flight safety.

Ctrl Enter
Noticed oshЫbku Highlight text and press. Ctrl + Enter
We are
Fortress with wings - strategic bomber Boeing B-29 "Superfortress"MiG-21 in Afghanistan
Add a comment
Information
Dear reader, to leave comments on the publication, you must to register.