December 5 2013
33
After the European Space Agency (ESA) announced that the 3D seal had entered the Iron Age, experts in the field of additive manufacturing began to develop a variety of new concepts for the 3D seal. One of the most interesting concepts of using three-dimensional printing was demonstrated by the American company Solid Concepts (Austin, Texas), which produced the world's first metal pistol made using an 3D printer. To create a fully functional rifle weapon, the engineers at Solid Concepts have applied “laser sintering technology.” Printed using 3D printers weapons appeared before, but before that, all models were made of plastic, not metals. Models made on consumer 3D printers were not reliable and could rarely make more 10 shots.


Today, Solid Concepts is one of the largest companies in the United States that uses 3D printing for the production of parts and industrial prototyping for customers from a wide variety of areas, including space and aviation industry. However, this was not unusual, something that other companies with the same equipment could not afford. The design of the pistol is one in one repetition of the American classic - M1911 developed by John Browning, who created this model at the beginning of the 100th century. Since then, the pistol was released in a multi-million circulation, many companies were involved in its production in various versions. For 1911 years of being in operation, the MXNUMX has been thoroughly studied and tested. Solid Concepts completely manufactured the gun, including the rifled barrel, from steel and inconel (an alloy of chromium and nickel) using the DMLS method - direct laser sintering. This technology is very popular and involves the process of layer-by-layer "growing" of the finished product sample from metal dust, which is melted in the right places using a laser beam.

According to representatives of the Texas company, they wanted to show the world what metal is capable of, and also to find a way that would ensure high accuracy of shooting and coped with high temperature. What the company really was ahead of the rest, is in the manufacture of an active pistol entirely using DMLS technology. This required from them not only engineering talents, but also a certain level of courage. More than 500 shots from the produced pistols were made from the hands of the company employees themselves in the shooting range. Pretty good company advertising, because the company is not planning to seriously engage in the production of weapons. Production of printed M1911 took Solid Concepts in order to most clearly dispel the myth that exists around 3D-printing - supposedly it can be used to produce only a variety of plastic trinkets. 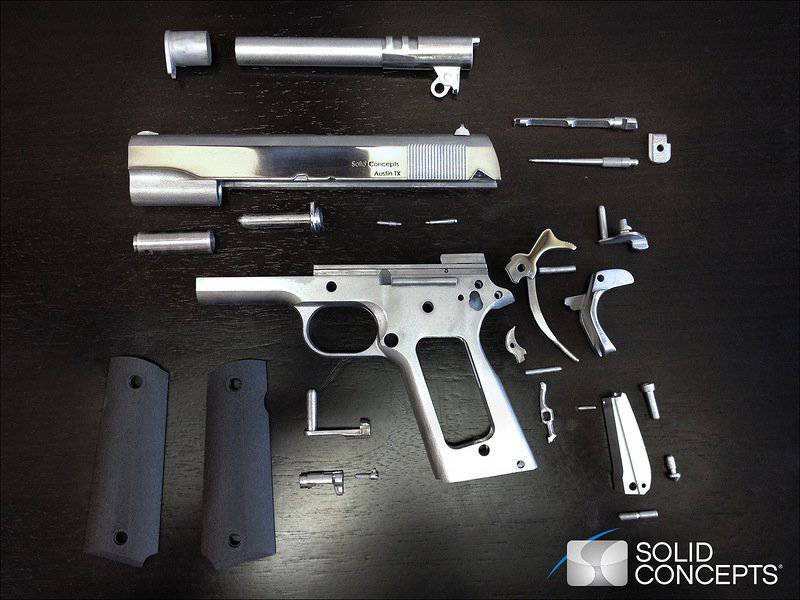 The complete gun manufacturing process takes from 25 to 35 hours of time. The duration of the work depends on the materials used and the printer. Today, many 3D printers are priced at less than 1 thousands of dollars, but Solid Concepts experts say that amateurs will not be able to make a steel gun that they have turned out to be. In the future, the company expects to conduct in this direction another series of experiments.

Produced with an 3D printer, the gun is an automatic M1911 pistol designed by the famous gunsmith John Moses Browning. Until 1985, this weapon was actively used in the American army, and today it is the most popular model of small arms, not only among all fans of shooting sports in the shooting range, but also among Hollywood directors.

It is noteworthy that John Browning himself, in the process of creating his famous pistol, first made a mock-up of his working parts out of cardboard, drawing an 2D-drawing and simply cutting it along the contour. Thus, it is safe to say that thanks to Solid Concepts, the weapon has moved into a new dimension. As American engineers told reporters, more than the 30 components of the M1911 pistol were made using laser sintering technology, in which powdered metals using a laser melt and fit tightly together in accordance with a given computer model. After the metal powder melts, the industrial 3D printer superimposes the next layer over the previous one, repeating the whole process until the computer redirects the nozzle of the device. At the final stage of production, the remaining powder is removed from the product, and the printed product is cooled and gradually hardens. 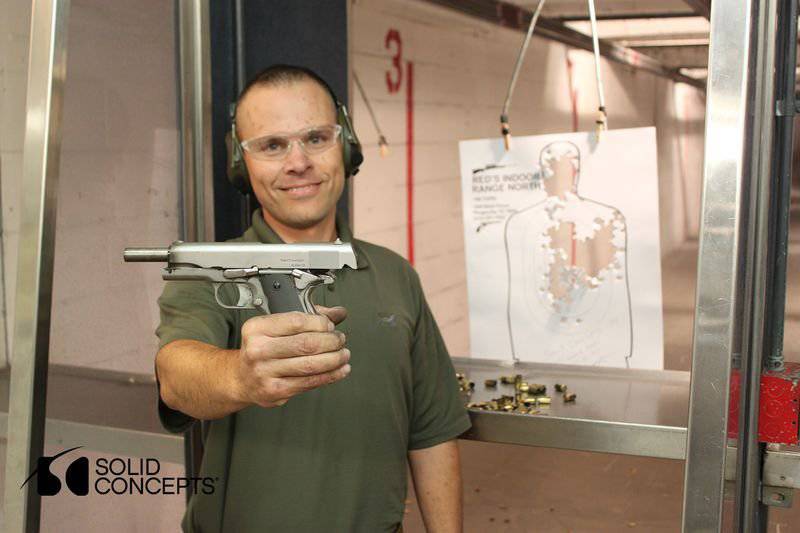 The M1911 pistol includes the 33 component, which is manufactured from stainless steel and a new nickel-chrome heat resistant alloy called Inconel-625. Even the pistol grip, which is made of carbon fiber with nylon coating, is also fully printed using an 3D printer. Unlike most M1911 pistols, printed in plastic, it was possible to make its barrel rifled. According to the engineers of the company Solid Concepts, a number of final stages of production were made in manual mode, while the weapon was not machined. In order to assemble a pistol from molded parts, it took the company specialists about 7 minutes.

A press release published by the company states that the purpose of the experiment was not to reduce the cost of the production process. The American company has tried to prove to everyone that, to date, metal objects printed on an 3D printer can be simpler to manufacture and more high-quality than those produced using traditional methods. For example, 3D printing technology provides much lower porosity of parts than common casting. For the same reason, printed products and designs are more durable and durable, if no errors were made during their release.

The barrel of the M1911 pistol is able to withstand the pressure in 14000 kg per square centimeter at the time of the shot. As part of the test, the printed gun fired 50 in a row and was left intact. Solid Concepts engineers were able to prove that modern 3D metal weapon printing is possible. "At present, our company is the only one in the United States that holds a federal license for firearms and can produce parts and pistols to order," said Kent Firestone, who holds the position of vice president of additive manufacturing. At the same time, the approximate cost of the gun made by this method was not announced. 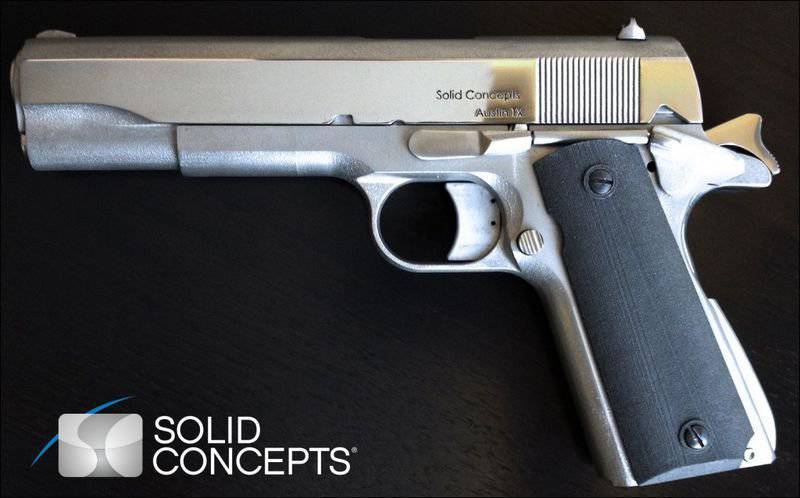 As modern practice shows, almost every technology has a downside. For example, we all were delighted with mobile phones, the Internet, social networks and e-mail, until we learned that personal information could be easily tracked using these modern technologies. The capabilities of modern 3D printers, which are already amazing, are no secret to anyone. Over time, when they become everyday household appliances, the same as a microwave oven or an LCD TV, it will be difficult for the government to control what people will print using these devices at home.

At the same time, representatives of Solid Concepts say that the technology for manufacturing metal weapons on the 3D printer is unlikely to fall into the hands of criminals and smugglers, as today there is a huge difference between desktop printers for additive manufacturing and industrial models. The use of the latter requires large financial costs and high professionalism, they are available only to large companies. In order not to disturb the public, the company announced that an 3D printer suitable for providing this quality DMLS printing costs hundreds of thousands of dollars in the market.

At the same time, judging by the latest statements by experts, the main reason for possible alarm is that from now on a person will be able to make a weapon that does not look like a weapon. He gets into the hands the ability to create things of any form that will not succumb to the well-established methods of defining weapons and the principles of weapons legislation. And the control of such handicrafts at the present time is an uncharted area.