What does the combat experience of engineering troops teach?

December 7 2013
43
The rich combat experience gained by the engineering troops in Afghanistan still remains of great importance today. About what technical and organizational measures carried out engineering units during this conflict, says the candidate of military sciences, professor retired colonel Peter Antonov.


The tasks of the units and subunits of the engineering troops had to under difficult conditions of mountain-desert terrain. The enemy launched a real mine war on the paths of movement of troops. 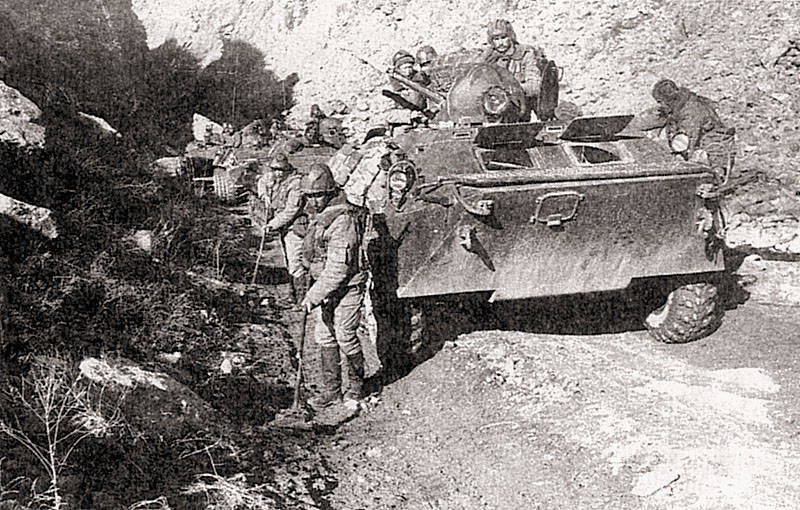 In the northern lowland part of Afghanistan - near the village of Imansakhib, the enemy, having destroyed the irrigation irrigation system and the dam, created extensive flood zones and roads in the 7 square. km As a result, the reinforced ISB could not overcome them.

Beginning with 1982, the proportion of mine blast barriers (MH) in the total volume of barriers has increased. A land mine war imposed by the enemy with the active support of military firms of several foreign countries dictated the need to revise the organization of combat training for engineering troops and engineering training for service arms. In October, the Marshal of the Engineering Forces S.Aganov spoke about this at the training and methodological gathering with the officers and commanders of the units.

In a short time, the training center of the engineering troops of the 40 Army was created at 45 oisp, field engineering camps during divisions and the ISP of separate brigades and regiments. In each division and a separate regiment for carrying out complex tactical and combat training with combat shooting, special routes were prepared. They were equipped with training points with a complex mine situation. Here fighting episodes were played up, tactical techniques were practiced.

The issues of accumulation, generalization and introduction into the practice of troops of combat experience in engineering support were reviewed. The widespread use of new-mined foreign-made mines with plastic shells required the most serious attention to be given to training units of sappers and breeders. 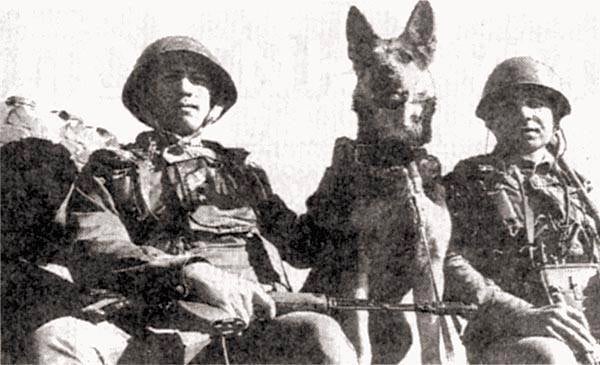 In the companies and battalions of the engineering troops, there were logs of the results of actions, as well as reporting maps with the engineering situation in division divisions and 45 oisp, which were obligatory reporting combat documents. On their basis, combat actions were analyzed, the most characteristic moments of the battle were noted, new in the mining tactics of the rebels and promptly developed methods of deactivating the cost centers, which were then drawn up in the form of express information and communicated to the troops.

To increase the level of training of the management personnel of divisions, brigades and individual regiments, 45 – 3-day training on the organization of engineering support for combat operations was held twice a year at the army training center at 4 oisp.

Engineering preparation of non-standard sappers was carried out at the 7 – 12-day training camp. Classes were conducted by experienced sappers. Along with the training of personnel for combat operations, the timely and reliable intelligence information largely contributed to the successful advancement of the advancing troops. Engineering intelligence established not only the place and type of obstacles, destruction, but also their character and parameters. 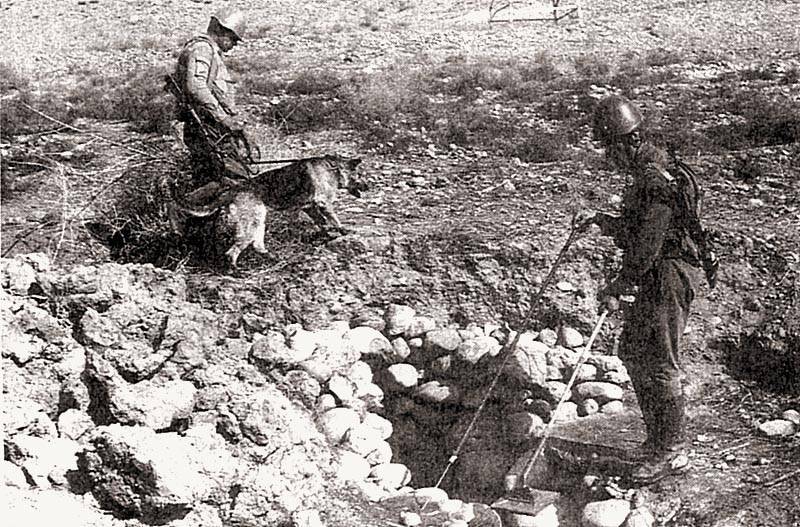 As combat experience shows, the units and units operating in the first echelon performed two tasks - fire destruction and destruction of the enemy, as well as mine clearance, barrage and restoration of driving routes. Therefore, the first-tier MSB supported by artillery, tanks, air defense and aviation, reinforced detachment of barrage and traffic, usually at an armored base. Such a detachment usually included: a tank platoon with 1–2 BTUs and 1–2 KMT-5M, IMR, MTU, an engineer-sapper platoon with 2–3 crews of mine detectors, 500 kg of explosives and 20–30 pcs. Short circuit. Transportation by helicopters to the installation site of bridge trusses, of individual bridge structures, usually from the Transition kit, was also envisaged. The actions of such a detachment covered 1-2 msv.

The experience of hostilities in Afghanistan has shown that the detachment of detachment and provision of movement is able to ensure the speed of the onset of the MSS 2 – 2,5 km / h in the mountainous terrain

The engineering units in Afghanistan themselves also installed a large number of cost centers. In the interests of direct combat, cost centers were used a little (about 12% of the total volume of all barriers), mainly for ambush actions. The bulk of the mines were put in order to self-defense, to cover the border. 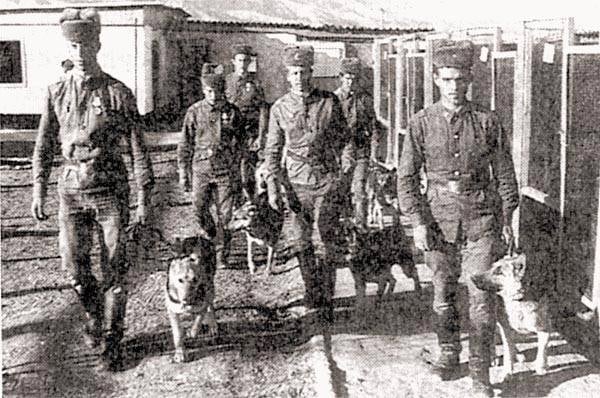 Dog breeders before going on a mission to mine exploration

Mine-blast barriers were permanent and temporary. In the first case, the minefields were covered with fire by the guard units, their combat status was monitored, if necessary, the cost centers were increased, and when the combat effectiveness was lost, new ones were destroyed and put out. Especially effective were the so-called active cost centers. Since 1984, they have been used on a massive scale with the cover of caravan routes.

In the mountains on caravan routes, a device of mine "bags" was used with different layouts of mines and with different terms of bringing them into a combat position. This allowed to keep the enemy in suspense and forced him to look for new routes.

High temperatures, dry and hot air with a high degree of dustiness exhaustingly influenced personnel and caused an acute need for water. Water was valued as ammunition, food and fuel and lubricants.

The task of extracting, treating water and ensuring the uninterrupted supply of troops to it had to be solved in the conditions of an unfavorable sanitary and epidemiological situation.

The use of tank trucks and other tanks allowed to increase the supply in the battalion to 90 – 100% of the daily water demand.

Water was delivered to remote areas by helicopters. Sometimes it was dropped by parachute in the RFN-200, but not always successfully, some of them were broken. Then they began to use pieces of fire hoses, with the ends clamped with special devices (capacity 10 – 12 l), which withstand strikes against the ground. 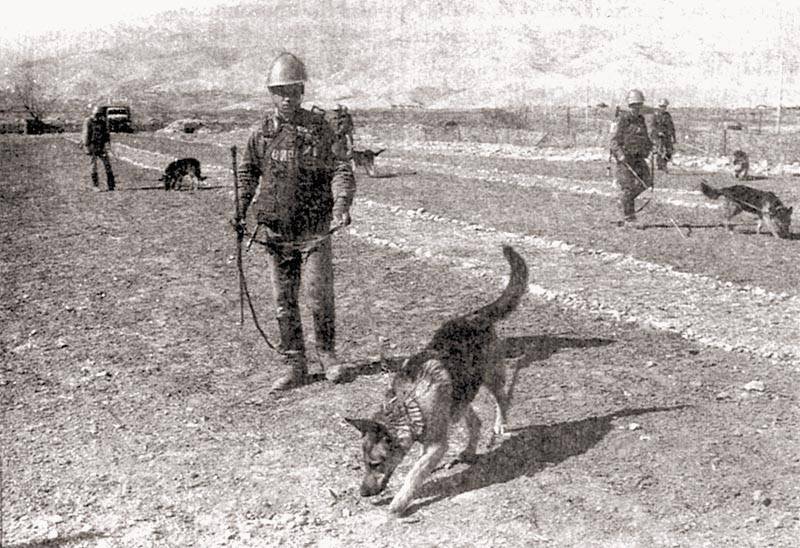 At mine exploration classes

Ctrl Enter
Noticed oshЫbku Highlight text and press. Ctrl + Enter
We are
Theory and practice of engineering operationsCreation of combat space: 21 century military engineering vehicles
43 comments
Information
Dear reader, to leave comments on the publication, you must to register.