December 3 2013
62
For the Russian Army for the first time in its stories prepare professional arctic shooters. Currently, the only group of cadets in Russia is undergoing a course in Blagoveshchensk on the basis of the Far Eastern Higher School of Management Labor Administration - the Far Eastern Higher Command School. It is assumed that for actions in the Arctic, the fighters of the Arctic brigades formed in Russia will use special military equipment and weapons that can withstand even the most severe frosts. Given the fact that the length of the Russian Arctic coast is 22,6 thousand kilometers, which is more than 2 times the length of the Arctic coast of all other countries of the world, the need to deploy such units becomes clear.


Frost and strong wind - almost like in the Arctic. Today the weather conditions in the Russian Amur region are in many ways similar to the polar ones. It is no coincidence that the Far Eastern Higher Military Command School in September 2013 of the year accepted new cadets, who began training in the specialty “The use of motorized rifle divisions in arctic conditions”. Currently, such a profession exists in the only Russian university. Since in the conditions of Priamurye there is simply no polar night, up to 30% of field training future Arctic motorized riflemen spend at night. 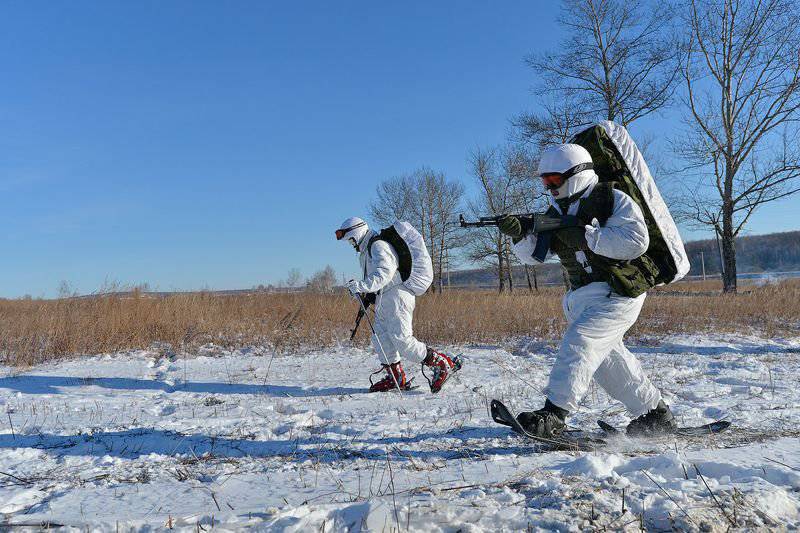 According to the head of DVVKU, Vladimir Gryzlov, the specialty “Use of motorized rifle units in arctic conditions” was opened for the first time in Russian history. Until 1 September, 2013 did not exist for this specialty.

This is quite an important political decision. In recent years, the attention of the whole world is somehow focused on the Arctic zone, in which the main reserves of natural resources are located. Today, even those countries that by geographic location cannot claim to the natural resources of this region of the planet aspire to the Arctic. At the same time, the length of the Russian Arctic borders is very large, so the country has a need for specialists who could ensure their security. At the same time, it is necessary to do this in quite difficult climatic conditions. The climate in the Amur region in terms of the presence of strong sub-zero temperatures and winds is close to the Arctic, so it was decided here to train the Arctic shooters. At the same time, for students the curriculum still provides for internship in the Arctic.

The only arctic shooters group in all of Russia, which is trained in Blagoveshchensk, has so far only 30 people. These cadets will have to learn how to use special military equipment and weapons that will be able to withstand severe Arctic frosts. For more than two months, cadets have been studying engineering structures, explosive business, and rendering medical assistance in permafrost conditions. Very soon, these guys will be served in places where there is no sun for 6 months, and the thermometer sometimes can drop to the mark –60 degrees Celsius. Cadets in the future waiting for the most distant frontier of our country, and he is the most responsible. However, these difficulties do not frighten young people, partly because of the special romance, and, of course, because of the emerging prospects. There is a direct benefit in the service in the Far North - increased wages and long service life (1 is a year of service here counts as 3). 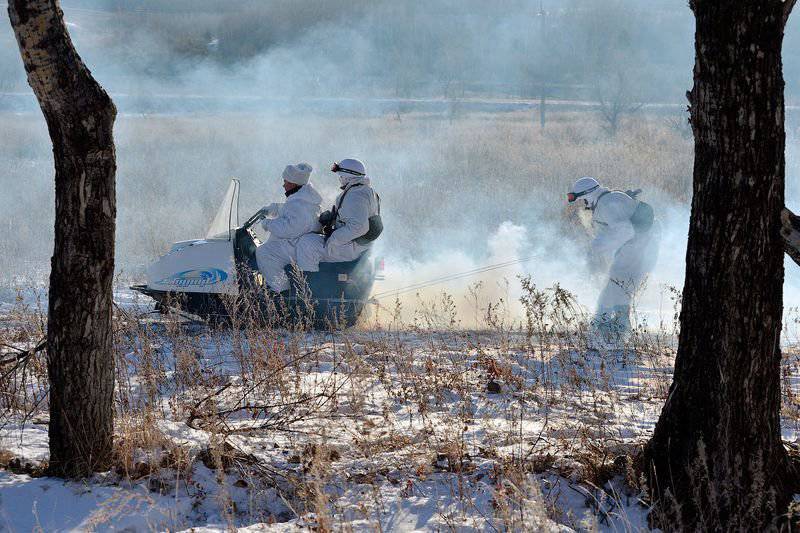 Especially for the training of Arctic cadets, as they had already been called at DVVKU, the higher educational institution received special weapons. Armed arctic shooters will be only those machine guns and grenade launchers that can withstand service in the harsh conditions of the Russian Arctic. At the same time, new domestic 12,7-mm Kord sniper rifle, which is able not only to easily penetrate BTR armor, but also withstand temperatures down to –50 degrees, is of particular interest to future polar officers. And this is the minimum that was confirmed as a result of the tests. As noted by Dmitry Sokolov, teacher of the department of weapons and military equipment of the school, the new sniper rifle is very high reliability. “Cord” is a non-automatic rifle, after the production of each shot it must be reloaded. All the generated energy of the powder gases is used for the flight of a bullet.

For many years, the unchanged attribute of the equipment of military units stationed in the north were skis. But, as they thought at the school, today alone skis are not enough to successfully solve combat missions in the Arctic. Today, speed is becoming increasingly important. Therefore, it was decided to use Buran snowmobiles to move arctic shooters through loose deep snow. Currently, future officers are trained on 3-s snowmobiles, which belong to the border guards, but very soon 10 new high-speed snowmobiles will have to go to the balance of the university. 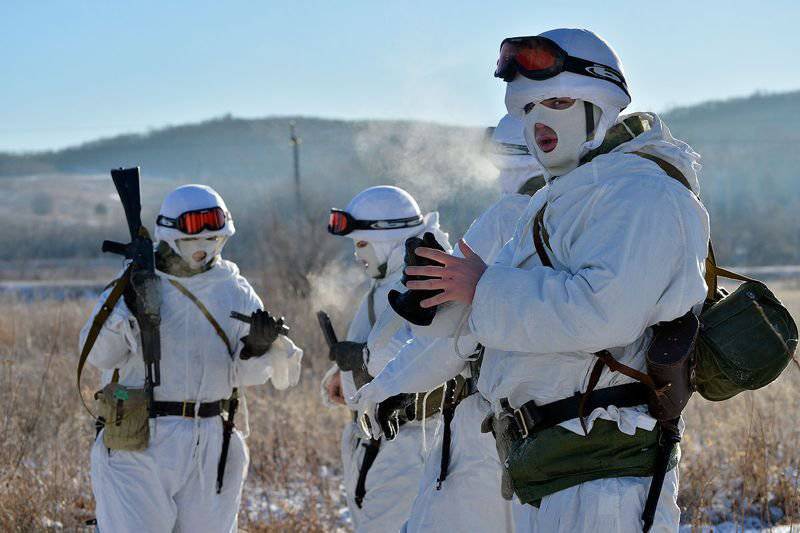 The practice of the cadets began quite recently, for this reason, despite the mistakes made, they receive a “good” mark on the exercises. At the same time, as the command of the school assures, in the future the requirements for the cadets will become harder and harder. After all, these guys in the future will have to weapons in the hands of defending the interests of Russia in a region as complex as the Arctic is.

It is assumed that the Russian ground forces will receive at least two motorized rifle arctic brigades. According to previously published information, the first one should be created in 2015 year. It is reported that Murmansk and Arkhangelsk will become the location of the Russian Arctic brigades. Initially it was said that the first compound in the Russian army for operations in the Arctic would be created on the basis of the 200-th separate motorized rifle brigade, which is based in Pechenga. It was planned to create it before the end of 2011. However, in the future, the dates were shifted to 2015 year. By this time, the Russian Arctic arrows should receive a full range of promising special equipment, which can be used in difficult Arctic conditions. 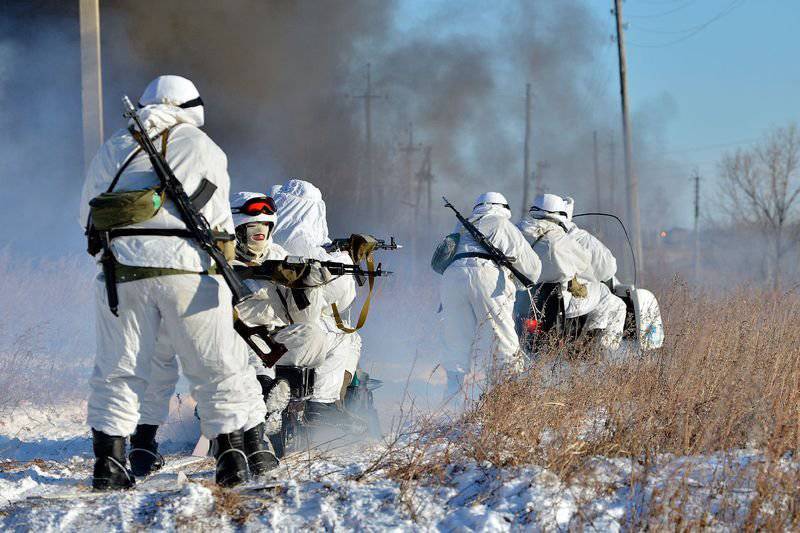 In 2013, this technique was actively tested. Equipment for equipping arctic brigades, which will have to serve in high latitudes, is being tested on the border with Norway in the area of ​​the village of Pechenga. According to the press service of the Ministry of Defense of Russia, various research tests of snow-swamp machinery with a carrying capacity of up to 4 tons are actively conducted in Pechenga, in particular, we are talking about GAZ-3351, DT-3P and TTM-3П machines.

For example, the new GAZ-3351 tracked snow and swamp-going vehicle is able to transport up to 2,5 tons of various cargoes or 16 arctic shooters. The TTM-3P is used as a light amphibian and is intended for transporting personnel of combat units. DT-3P floating armored car was originally designed for use in places where there are almost no roads. At the same time, even in the conditions of total off-road, the machine is able to reach speeds of up to 60 km / h, and its range is up to 700 km. All experimental machines are floating and two-link, that is, there is a real opportunity to attach a variety of trailers to them. All these samples of promising military equipment, unlike their civilian “colleagues”, were designed in such a way that they could carry a variety of weapons systems. 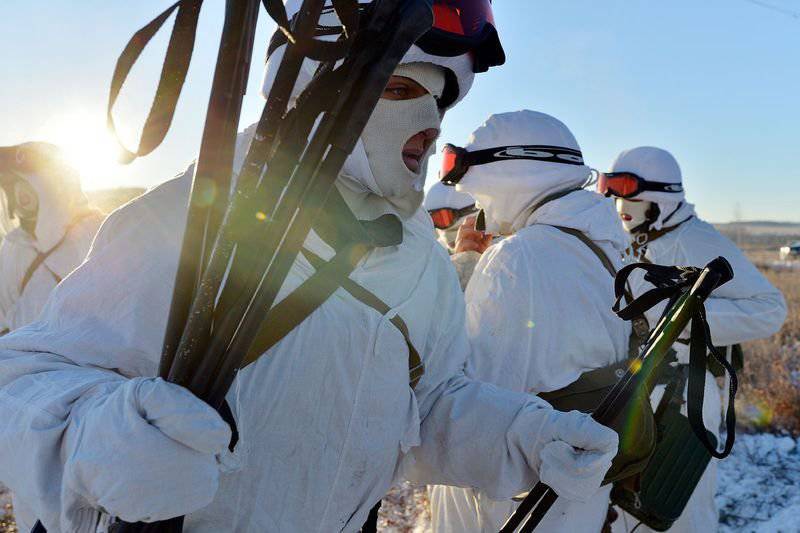 Ctrl Enter
Noticed oshЫbku Highlight text and press. Ctrl + Enter
We are
The first steps towards the revival of the Borisoglebsky Higher Military Aviation School of PilotsRyazan Higher Airborne Command Double-Red Banner School named after General of the Army V.F. Margelov Happy Birthday!
62 comments
Information
Dear reader, to leave comments on the publication, you must to register.