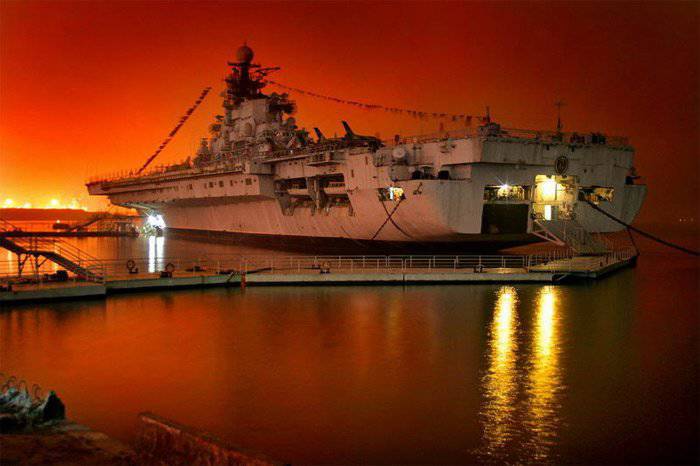 As if two fragments of granite rock are a great legacy of the Soviet Union.

The heavy aircraft-carrying cruisers “Kiev” and “Minsk”, sold abroad at the price of scrap metal, now decorate amusement parks in the People's Republic of China. "Kiev" props the mooring wall in Tianjin. His twin became part of the Minsk World theme park in Shenzhen. At first glance, ships are naval ships and aviation museums - with aircraft located on the upper deck, fake missiles and battle stations in the superstructure preserved in their original form. But if you go down to the lower decks, you suddenly find yourself in a realm of brilliance and luxury: inside the former Soviet aircraft carrier, an original hotel with 148 rooms is equipped - from simple to luxury, as well as a restaurant serving Ukrainian cuisine.

The legendary TAKRs of 1143 av. (Code “Krechet”), which were in service with the USSR Navy from the middle of 70 to the end of 80. The lead ship of the series - “Kiev”, commissioned in 1975, became the ancestor of the new class of ships - heavy aircraft carrying cruisers (TAVKR). Large combat units with a total displacement of over 40 thousand tons, combining air wings of three dozen units of aircraft and the strike power of a heavy missile cruiser. The 2 / 3 hull length was occupied by a flight deck with seven landing pads for VTOL aircraft and helicopters. Under the flight deck was an aircraft hangar with dimensions 130 x 22,5 meters. The nose was completely given to the placement of missile and artillery weapons. 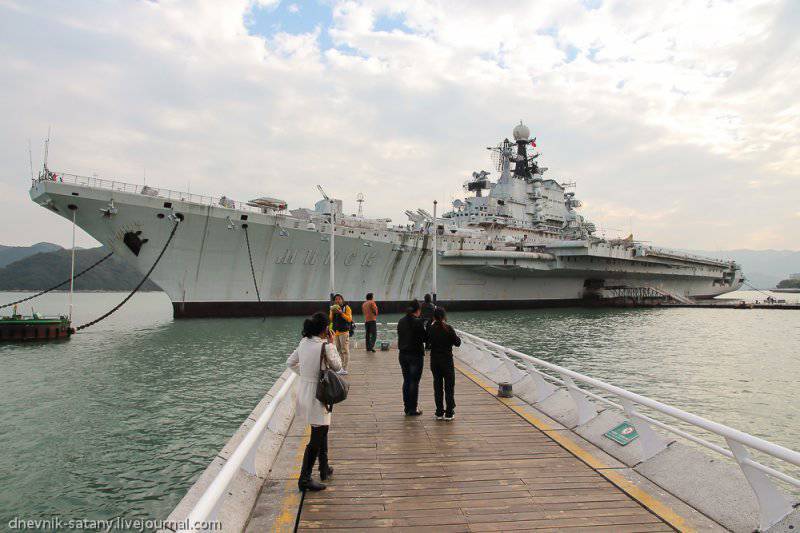 The bristling anti-aircraft machine guns and the peaks of Eastern-facing missiles from beam launchers, with roaring planes on the flight deck - the 270-meter giant was a fantastic spectacle that even now thousands of tourists come to watch from all over the world.

The hybrid was not very rational in terms of combat capabilities, however, very sophisticated from a technical point of view - in 70-ies no country in the world (except the US), with all the desire, could not recreate something like that.

The best achievements of the Soviet military industrial complex were embodied in the TAKR design: the P-500 "Basalt" anti-ship complex with supersonic long-range missiles, the M-11 "Storm" medium-range anti-aircraft missile system, the Vortex anti-submarine missile system with special combat units, and radar stations in general Detection MP-700 "Fregat-M" and MP-600 "Voskhod", combat information and control system "Alley-2", sonar complex in the composition of the towed GAS "Platina" and towed GAS "Orion", the station t MI-110K submarine thermal wake track and MI-110Р wake radiation detection station, satellite communications and data lines, five EW stations, passive jamming systems, automatic radar-guided anti-aircraft guns. In 1975, not a single fleet in the world had such equipment and could not even dream of building such a ship. 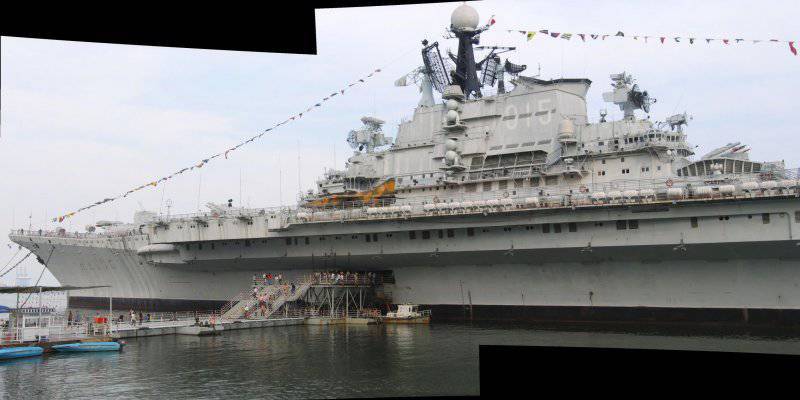 From this angle, the dimensions of Minsk are well felt. The ship is monstrously great.
The "star number" of the Soviet TAKRs was an air show with Yak-38 aircraft. A small single attack aircraft, holding the first accident rate among all the aircraft and air force aircraft. Nevertheless, it is one of the three types of vertical take-off and landing aircraft that have been put into service and launched into serial production (the other two VTOL are the British Sea Harrier and the promising American F-35B). The value of the Yak-38, as a combat unit, was small - the plane earned many offensive nicknames (“top mast defense aircraft”) and was considered unpromising to perform any pressing tasks. Low thrust-to-weight ratio and low LTH, coupled with the lack of on-board radar, did not allow Yak to effectively intercept air targets (only by visual contact, using cannon-mounted cannons or short-range missiles). At the same time, the minimum combat radius (with a vertical take-off with a payload did not exceed 100 km), a small combat load (a total of 1500 kg during take-off with a shortened take-off run) and the absence of compact anti-ship missiles with a long launch range made it not very useful as a strike aircraft. 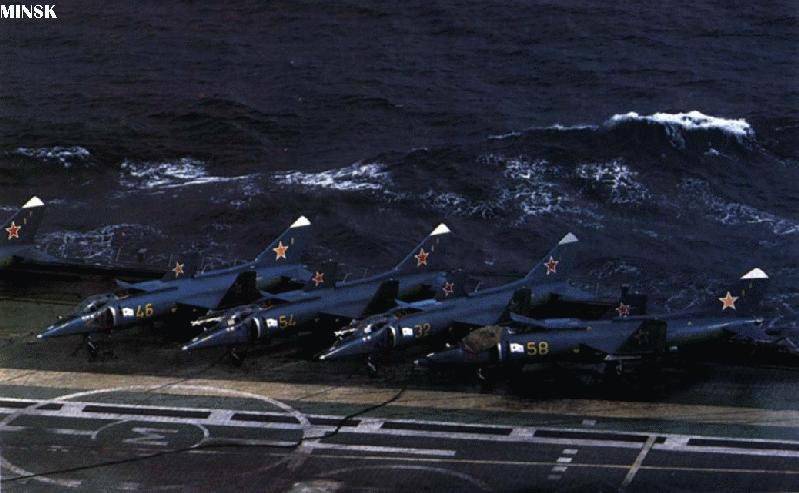 More importantly, a full squadron of anti-submarine helicopters could be based on board an aircraft-carrying cruiser. A dozen Ka-25PL helicopters, the Whirlwind missile system and its own means of detecting the PL-TAVKR, which was originally created as a powerful anti-submarine cruiser, fully justified this mission.

Anti-aircraft weapons were no less important: the TAKR, unlike the American aircraft carriers, was deprived of F-14 interceptor fighters, but in return had consolation in the form of three anti-aircraft echelons.

Finally, the strike weapons, which became an unpleasant surprise for the “probable opponents” - 8 PU for anti-ship missiles of the P-500 “Basalt” complex (ammunition kit - 16 RCC). The maximum launch range is up to 500 km. March speed - up to 2,5 M at high altitude. Starting weight ≈ 5 tons. This "one-time attack aircraft", unmanned kamikaze aircraft. Warhead - penetrating type, mass 1000 kg or "special" power 350 CT. As of the mid-to-end 70-s, no AUG air defense system guaranteed protection against the “flock” of the 8 ASMBR. At the same time, one hit of a similar anti-ship missile with a conventional warhead was enough to break the escort cruiser in half or permanently disable the aircraft carrier. 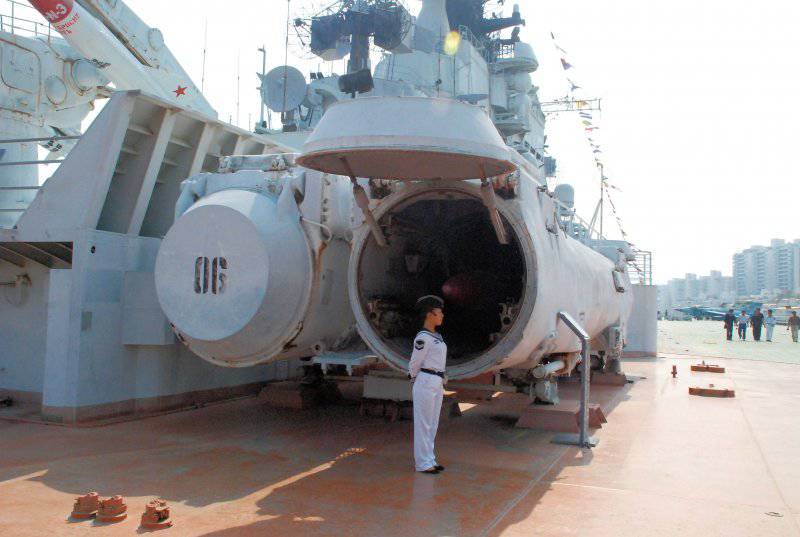 Contrary to popular misconception, the combat capabilities of TAKR were determined primarily by the capabilities of the anti-aircraft, anti-submarine, and shock weapons and detection tools placed on board. As for the Yak-38 superplanes, the pilots joked: "The Soviet military threat: took off, frightened, landed."

Full displacement - 40 000 + tons. Steam turbine power plant with total power 180 000 HP The crew of the ship is 1433 sailor + 430 man of a wing. Full speed - knot 32. 8000 sailing range at economic speed 18 knots. Six missile systems for various purposes, anti-aircraft and universal artillery, RBU, torpedoes, under the ground and towed GAS, a powerful radio engineering complex of detection, reconnaissance and EW, up to thirty units of aircraft and helicopters on board ...

A masterpiece of science and technology. A naval combat platform that combined the functions of an anti-submarine ship, a missile cruiser and an aircraft carrier (helicopter carrier). TAKRs became the visiting card of the Soviet fleet, powerful combat units capable of radically enhancing the combat stability of any ocean squadron. 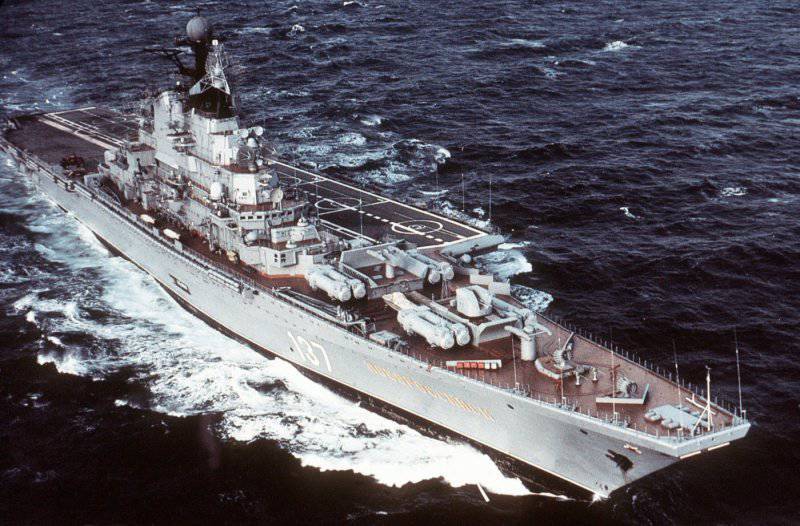 TAKR "Novorossiysk"
A total of 1143 TAKR was built on the 4 project. "Kiev" and "Minsk" had minimal differences in design and were externally indistinguishable from each other.

The third building, Novorossiysk, was already being built with all the deficiencies identified during the operation of the first TAKRs. Were dismantled useless torpedo tubes. the outdated Osa-M SAM system and the Bazalt spare set of missiles — reloading 5-ton missiles under combat conditions looked too unrealistic. The released space reserve was spent on increasing the air group and the ability to accommodate the landing on board. Now you can base heavy helicopters. Were updated CIU and radio equipment ship. The complex of detection tools supplemented the tackle radar MP-350 for detecting low-flying targets. Instead of the underground “Platinum” underground station, the fantastic station “Polynom” was installed.

The fourth TAVKR - “Baku” (“Admiral Gorshkov”, 1143.4 Ave.) - was the next stage in the evolution of Soviet aircraft-carrying cruisers. The nasal part was expanded due to the elimination of the nasal sponson on the left side - the number of PU P-500 "Basalt" increased to 12. The outdated Storm and Osa anti-aircraft systems were replaced with 24 underdeck short-range air defense missile systems Dagger (192 SAM missile) - a direct consequence of the appearance of a threat in the form of low-flying anti-ship missiles. The caliber of universal artillery was increased to 100 mm. New CUS "Icepick". For the first time in the Soviet fleet, on the ship they installed a Mars-Passat radar complex with four stationary HEADLIGHTS (they didn’t manage to bring this complex “to mind” - the Soviet Navy disappeared, along with a great country).

The fate of these ships was different.

"Kiev" and "Minsk" faithfully served until the end of the 80-ies, having performed on 10 combat services in the expanses of the World Ocean. Due to the lack of suitable coastal infrastructure, both TAVKRs were forced to stand on the roadstead, constantly using their own power plant for energy supply. Raid "killed" the ships. By the end of 80's, Kyiv and Minsk had almost completely exhausted their resources and needed urgent overhaul and modernization. By that time, the process of decommissioning the obsolete Yak-38 began, but it did not appear to replace them with the Yak-141. Due to the uncertainty of the future fate and purpose of these giants and with a sharp reduction in funding, it was decided to exclude the TAKRs from the Navy.

In 1991, the Kiev was taken out of the fleet's combat fleet to the reserve — the ship from the 1987 did not go to sea, and by that time it was an unworkable rusty ruin. In 1993, the TAKR was finally disarmed and a year later it was sold for disassembly to China. Contrary to the fears associated with the restoration of the once formidable ship and its inclusion in the current composition of the PLA Navy, the Chinese refused to adopt such "hybrids". Aircraft cruiser turned into a luxury museum hotel.

There was a similar with “Minsk” история - the ship would have been sold for cutting to South Korea, but as a result, it also turned out to be in China, turning into a magnificent monument of the Soviet Navy in the city of Shenzhen.

The fate of Novorossiysk turned out to be much more bitter: despite the relatively young age of TAKR (by the time it was put into reserve - less than 10 years), the overall archaic nature of its design and the absence of a suitable VTOL aircraft unambiguously affected the outcome of the situation - in 1994, the ship was sold to a South Korean company Young Distribution Company for 4,314 million dollars, but alas, at that time there was no one willing to buy the TAKR for any urgent tasks, and Novorossiysk was mercilessly cut into nails.

The only one who managed to survive his time and enter service already under a new, Indian name - INS Vikramaditya - became the Soviet aircraft carrier “Baku” (he is also “Admiral Gorshkov”). 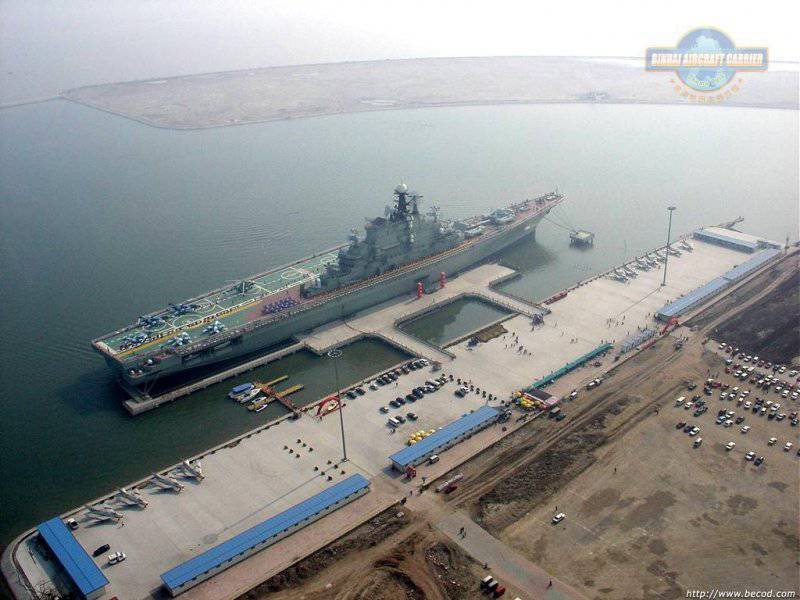 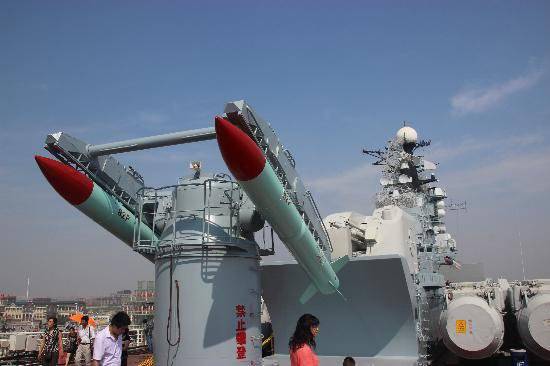 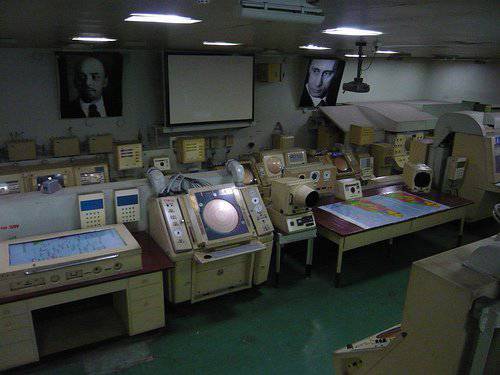 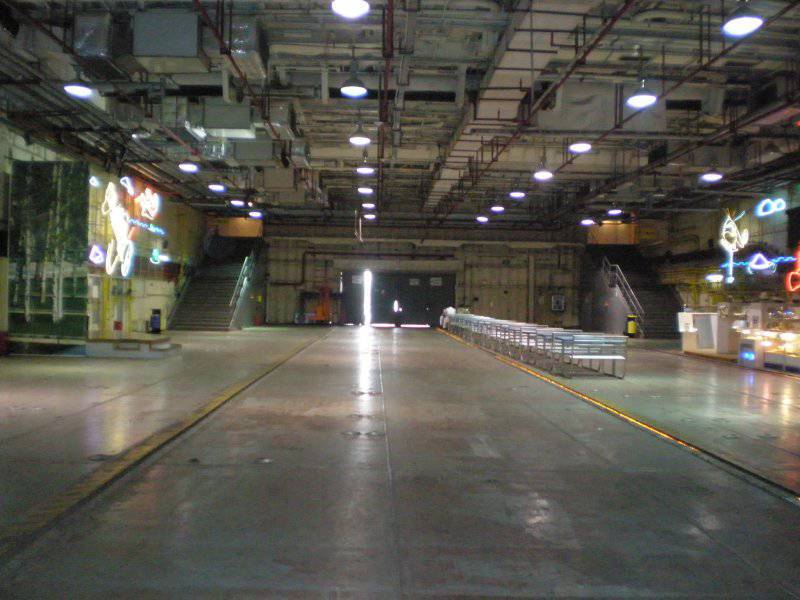 The hangar deck of "Minsk" 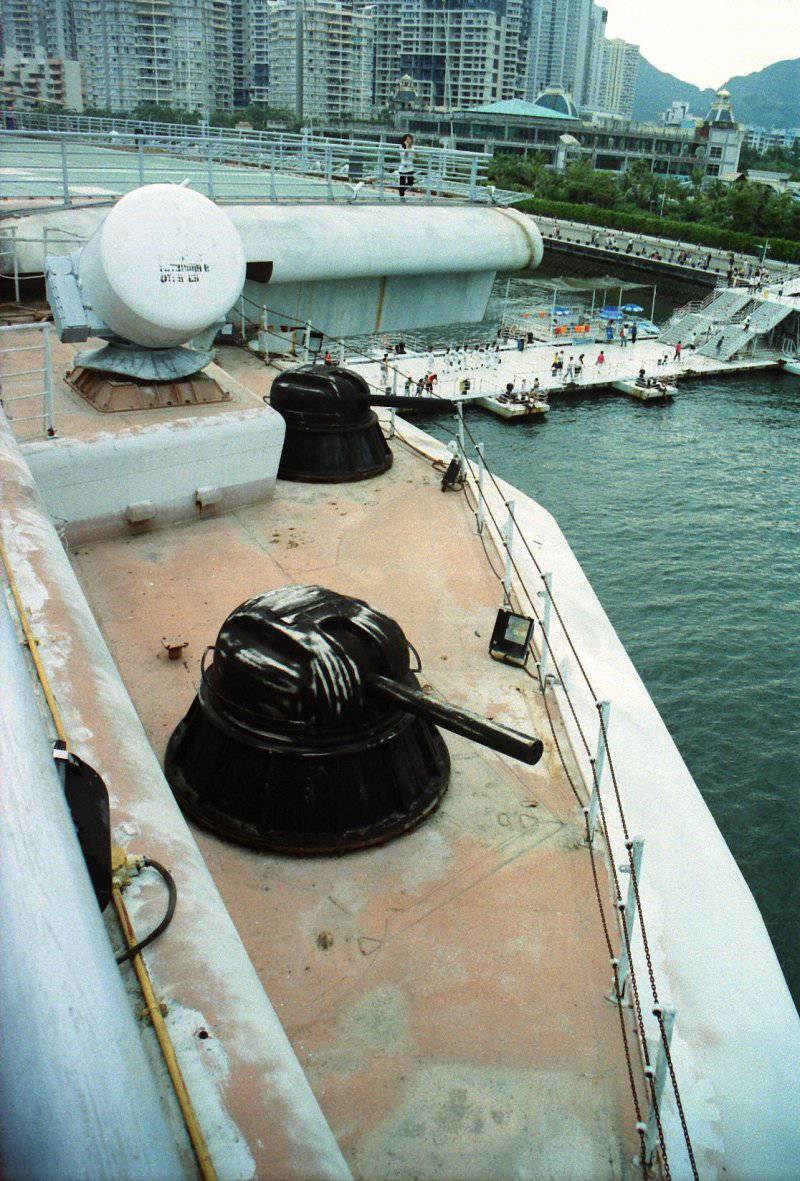 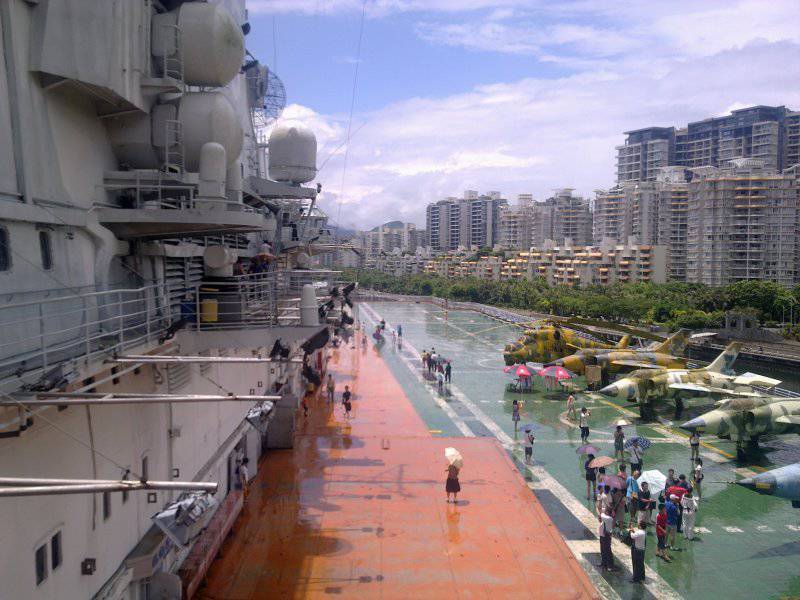 On the deck noticeable transport and combat Mi-24. Planes built into the line are Nanchang Q-5 light attack aircraft. This is hard to believe, but the Chinese claim that this is a profound modernization of the MiG-19 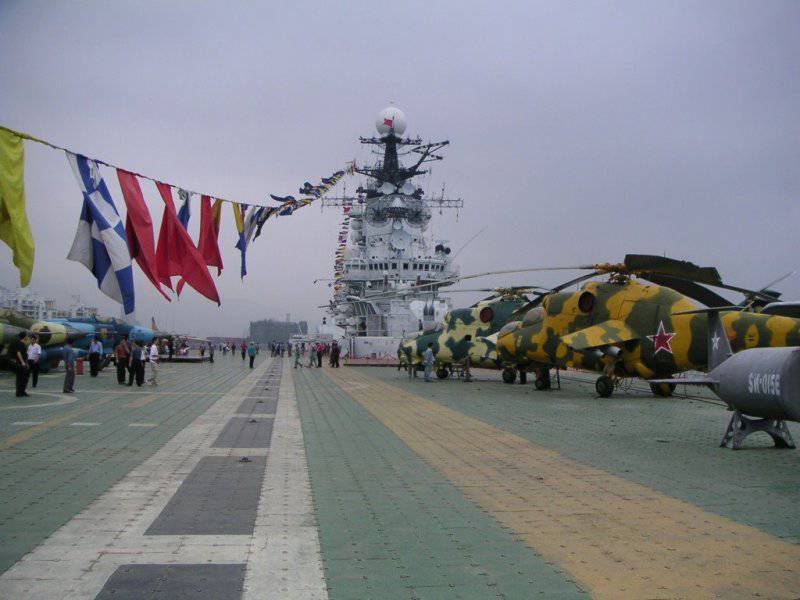 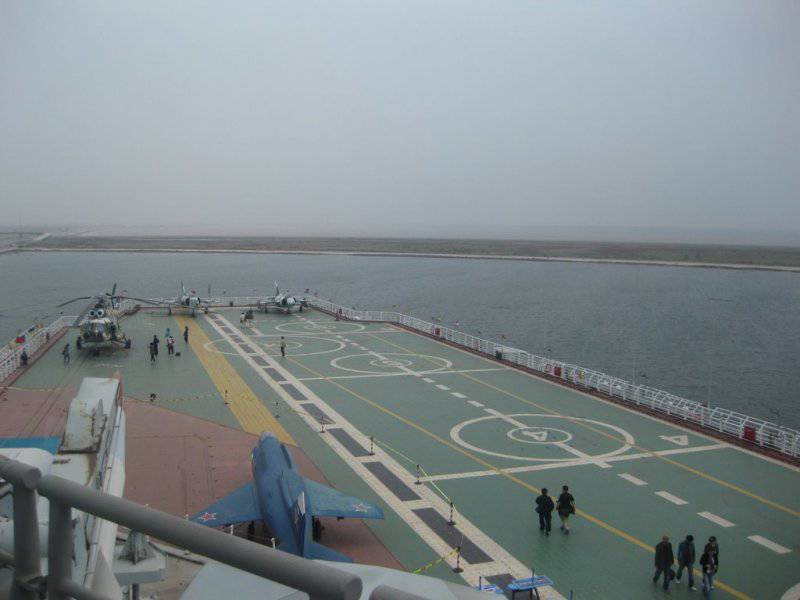 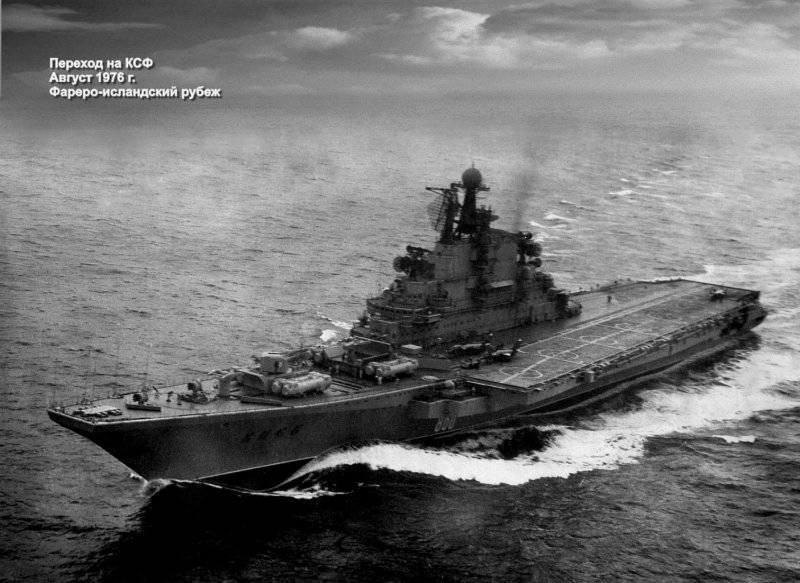 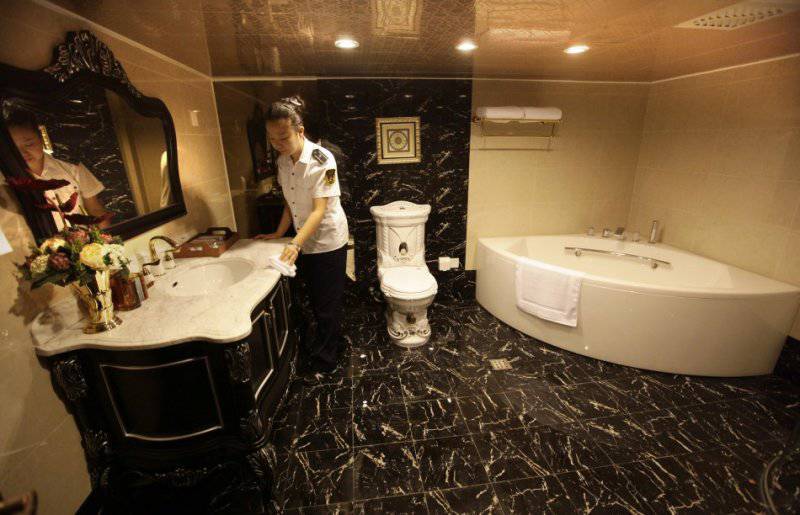 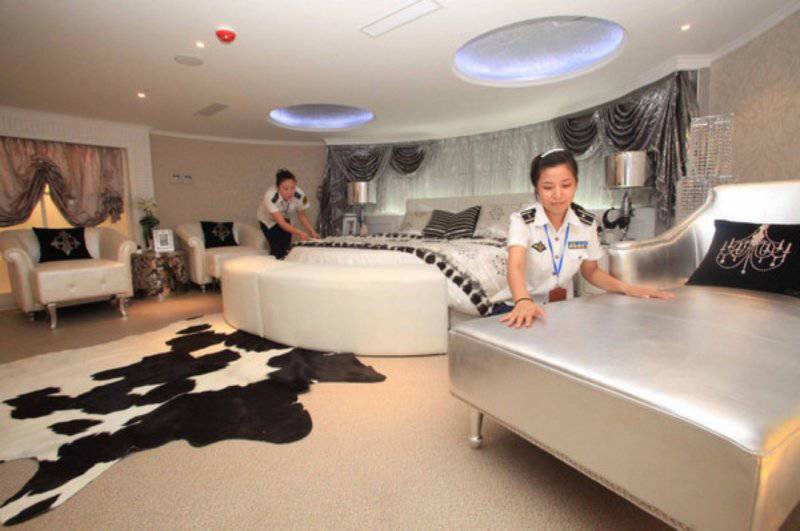