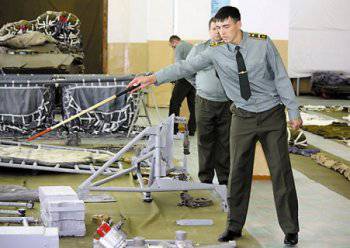 The most important problem of military education in Russia has become the modernization of the officer training system. Changes were made to the training and education of cadets of military schools. But still new sections are added, the list of planned topics is constantly expanding. At the same time, there are a lot of unnecessary programs, while many questions remain outside the scope of training.


Reasonable initiative should not be punished.

Not a single military training program provides for the development of initiative and ability to generate their own solutions to future officers. Of course, it is necessary to know the fundamental laws, principles and rules of warfare, but very often, commanders in battle have to make decisions, relying solely on their intelligence.

The nurturing initiative and independence of officers has received close attention since the formation of the regular Russian army. Officers were given the initiative to act in accordance with the "occasion" and "habit" of the enemy. For "non-reasoning" in battle, the officer was severely punished. It was especially emphasized that in the military Charter “orders are written, but there are no times and cases”, therefore in military actions you need to have “reasoning”, in accordance with the circumstances, and not to adhere to the Charter, “like a blind wall”.

Unfortunately, these abilities by officers began to be lost. “After the war, it was customary to say at the operational-tactical exercises and exercises that the decision of one or another commander meets or does not meet the requirements of the statute,” the army general Gareyev testifies. - But the solution for a particular task cannot and should not comply with the statutes or other theoretical provisions. It can be vital only if it takes into account all the shades of the prevailing conditions, corresponds to a specific situation and ensures the most effective accomplishment of the task set ... The most terrible enemy of rational military art is a pattern and dogmatism. The strength of military art is in creativity, innovation, originality, and consequently, in unexpected decisions and actions for the enemy. ”

The future officer needs fundamental knowledge stories military art. But not for raising to the rank of dogma, but for reflection and creative application to modern conditions. Although the classical theories of war in the development of Sun Tzu, Vegetia, Machiavelli, Clausewitz, Svechin, Garth and require adaptation to the current era, they remain fundamentally fair. The logic of war and strategic thinking is as universal and infinite as human nature itself.

The cadets of military schools should receive such knowledge that would give them the opportunity in a short time to master any military specialty. Considering that the concept of warfare and military equipment changes dramatically over the course of 5 – 10 years, the future officer must be able to learn, to acquire knowledge independently. An example of this was shown by Alexander Suvorov, who by the 20 years had independently studied and thoroughly knew all the campaigns of Macedonian, Hannibal, Caesar, Conde and other then well-known commanders. Later he mastered seven foreign languages, including Turkish and Finnish, perfectly mastered mathematics and other sciences. And did not lose a single battle.

In a military college, teachers should do everything possible so that the cadets completely forget about school training in the form of “coaching” to pass the EGE. Future officers should be taught to think independently, and not to prepare cheaters from them, as is done in school. Cadets need to focus on an independent search for the desired solution of problematic issues, and not on the ability to find the right option from their presented set.

Great assistance in the development of creative thinking is provided by the study of natural science disciplines, and above all, mathematics and computer science. At the heart of all concepts of warfare of the future is the use of information technology. Therefore, without knowledge of computer science, without the ability to apply algorithmic methods for solving optimal planning and control problems, the future commander cannot be established. Each student must carry out calculations using spreadsheets, work with databases, create algorithms and write programs in high-level programming languages.

An important role in the development of the future commander is played by the study of the humanities, primarily pedagogy and psychology. From the commander is required the ability to convince people.

Combat training is crucial. The main teaching method should be visual, not verbal, as in most military schools at the present time. The main study time should be set aside to show off and practice practical actions - it is better to see once than hear a hundred times, but even better to do once than see a hundred times.

Equally important is political preparation. Throughout the history of the Russian army, officers tried to engage in politics, to attract to their side, based on a variety of beliefs and beliefs.

The tsarist government forbade officers to turn to politics. During production, officers were given a subscription of the following content (its text remained unchanged until 1917): “I, the undersigned, give this subscription to any Masonic lodges and secret societies, Dumas, Governors and other matters they didn’t exist, I didn’t belong, and I’m not going to belong, and that not only members of these societies were under obligation, didn’t come through an oath or honest word, and didn’t attend or even knew about them, and through conspiracy outside the box, Doom Uprav, both about societies and about members, also knew nothing and no commitments and no oaths. ”

Such oaths adversely affected the political training of officers and were one of the reasons for the confusion of the officer corps during the events of February – October 1917. The political demarcation of officers became possible only as a result of their political ignorance, and their practical actions were often determined by the prevailing political situation, rather than ideological positions.

“The pursuit of leaving the army out of politics and public opinion is now nothing more than the fruit of clerical wisdom,” said Tsarist Major General Vladimir Voronetsky, who until July 1916 headed the headquarters of the 13 Army Corps.

The role of the political training of the officer corps is determined by the following circumstances.

Firstly, the army is an instrument of power. The officer corps cannot wander in political darkness: it must be politically enlightened and involved in the state tasks that the authorities decide. The officer must be an active carrier of the state and national ideas.

Secondly, the political preparation of war, the political aspect of war itself requires a high political qualification not only of the highest, but also of the senior and junior officers.

Thirdly, the war itself requires the officer to manage and direct the energy of the masses to achieve victory, and without ideology it is impossible to cope with this task.

Fourthly, attempts by political parties to use the officers in the struggle for power require not only political vigilance, but also political insight, the ability to see the common good of the state behind the actions of individual parties, groups and individuals.

Finally, fifthly, the officers should be considered as the most important personnel reserve of the state.

Therefore, political training should become the most important area of ​​training for cadets of military schools. At the same time, political training of cadets is more than just the sum of classes and seminars. This is a complex and multifaceted methodological complex, allowing to solve many issues of the future officer's formation. Just to inform about political issues is only half the battle. It is necessary to enter into a discussion on controversial positions. Only then will the future officer become competent in making political decisions and be able to convince and educate conscripts who may be members of various political parties and movements.

Now the physical health of Russian citizens has decreased significantly. The experience of the Chechen wars showed a weak level of physical training and many officers of the Armed Forces. On the level of training of soldiers and generally not worth talking about. Therefore, in military schools it is necessary to address issues of strengthening and maintaining the health of cadets. Greater benefit would be the inclusion of martial arts in the curriculum. Such programs exist in China, Korea, and Japan. We had such an experience when, for example, boxing was included in the program of Suvorov schools, and ju-jutsu - cadet schools.

The study of martial arts also contributes to the education of composure, attentiveness, the ability not to lose sight of the details, to penetrate into the plans of the enemy. The methods of psychophysical education used in martial arts are also used to develop certain moral and volitional qualities, self-regulation skills, which can withstand the stresses and overloads of military service. Martial arts classes contribute to the development of activity, dedication.

We are taught by those we have learned ourselves.

The leading role in the training of future officers belongs to the leadership of military education. Unfortunately, the Department of Education of the Ministry of Defense of the Russian Federation, when it was headed by Ekaterina Priezheva, did a lot for the collapse of the military education system. Many military academies and universities have been eliminated, the faculty staff has been reduced seven times. They switched to the three-level Bologna system, which caused a decline in the quality of training (by the way, Defense Minister General of the Army Sergei Shoigu has already canceled it).

The most important role in the training of future officers is played by the teachers of military schools. At the same time, the level of training of teachers themselves has dramatically decreased in recent years. This is due to the lack of experience of some teachers, and sometimes service in the army. One of my friends from the military school went through the “combat path” from lieutenant to colonel, sitting at the same table in the same room and teaching the students the statutes of the Armed Forces. Another colleague at the Military Academy, while writing a Ph.D. thesis on the operation of a combat missile system, went to the Central Museum of the Armed Forces to see how this complex looks live.

Therefore, it makes sense to rotate the officers-officers and officers from the troops, sending the first to a long trip to the troops to update and replenish knowledge, and to send the most trained officers from the troops to military schools for teaching. For example, in the United States after the Gulf War, officers who received combat experience were sent to teaching at the University of National Defense, military colleges and training centers in Forts Leavenworth, Knox, Benin and others.

In our civilian universities now more time is devoted to the study of basic sciences, and highly specialized disciplines are included in the program of special courses and seminars. This contributes to the fact that each student can make a choice in the study of special disciplines, in accordance with their abilities and inclinations, which gives graduates the basis for mastering any specialty in the profile of the university.

This experience, it seems, is useful for the Ministry of Defense. Increasing the time for studying the basic sciences due to a certain reduction in highly specialized disciplines and their more flexible distribution would contribute to the speedy growth of the number of military specialists used in various fields of activity.

Ctrl Enter
Noticed oshЫbku Highlight text and press. Ctrl + Enter
We are
Amateurs instead of lieutenantsSo without the officers remain
18 comments
Information
Dear reader, to leave comments on the publication, you must to register.