November 28 2013
27
Similar to the Soviet MiG-9 jet fighter, the American Lockheed F-80 Shooting Star (translated from English as “shooting star” or “meteor”) became the first truly combat-capable aircraft of this class in the United States. The aircraft was able to reach speeds at 800 km / h. Also, this machine was the first American jet aircraft, which took part in air battles and won them. Also for the first time it was with this machine that the procedure of refueling the aircraft in the air was carried out in combat conditions. For some time (rather short), this aircraft also belonged to the world record for flight speed.


Today we can say with confidence that, as a combat fighter, the Shooting Star was not like a more successful machine than the world's first jet fighter - the German Me 262. However, perhaps it was not he who gained the greatest fame, but the two-seat combat training aircraft based on it, which received the designation T-33. This machine is considered to be one of the most successful post-war aircraft. It was through the combat training option that a kind of reincarnation of the F-80 aircraft occurred. The combat version of the training aircraft AT-33 is still in service with some states.

It is worth noting that the United States joined the race to create a jet rather late. aviation. Significantly accelerated the fact that in 1943 the command of the U.S. Air Force was seriously concerned about the emergence in service of the Germans new jet fighters Me.163 and Me.262. At the same time, the U.S. Air Force made Lockheed an order for the design of a jet fighter, which was supposed to receive a British engine. Work on the design of the machine began in July 1943, after the latest Havilland H-1 turbojet engine (Havilland H-1) was delivered to the United States from the United Kingdom. The creation of the aircraft command of the US Air Force took an unusually short time - only 140 days. 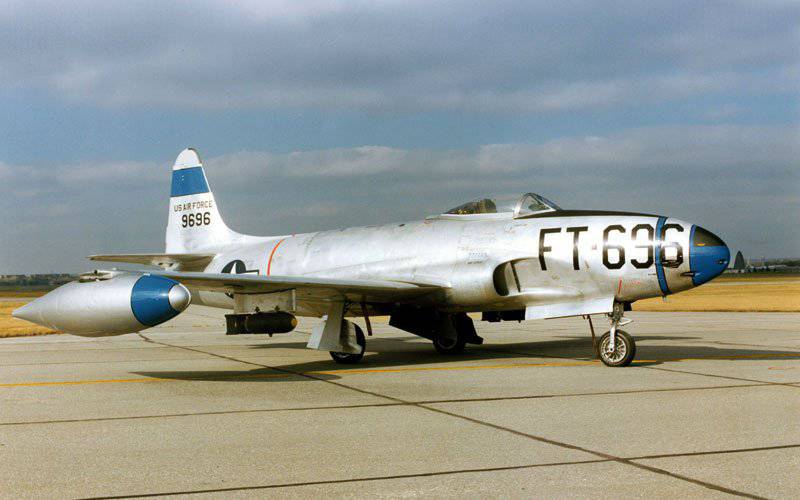 Despite such a short time, Lockheed was able to successfully cope with the task, the XP-80 aircraft project was created only a day later than the military’s deadline for 2. At the same time, the plane experienced problems with the turbojet engine, for this reason, the first flight of the novelty took place only on 9 in January of 1944 of the year. In February, Lockheed specialists prepared a new prototype XP-80A, which was equipped with an American-made TRD. This is a General Electric I-40 engine.

F-80 fighter was the first truly jet combat aircraft, entered service with the US Air Force. This aircraft, like its British counterpart of those years, had a quite traditional appearance for its time and a rather simple design, which allowed the car to become a real workhorse of tactical aviation of the US Air Force. For 5 years after the end of World War II, he served as the main American fighter-bomber.

At the very end of the war, in April 1945, two F-80 aircraft were sent to the UK, where they were incorporated into the 8 Air Force, and two more fighters were sent to Italy. In this case, none of the 4-x aircraft did not participate in the active phase of hostilities in Europe. The first serial fighter aircraft, which received the official designation P-80A Shooting Star, entered service with the US Air Force at the end of 1945 year. They were sent to the 412 fighter group, which was quickly renamed the 1 fighter air group, which included 3 squadrons: 27, 71 and 94. Already 12 June 1946, the 16 of the new American aircraft was aimed at strengthening the European grouping, which was caused by the blockade by the Soviet troops of West Berlin. Production of aircraft Shooting Star was carried out before the 1953 year. After the end of the Korean War, all aircraft were transferred to the National Guard Air Force. 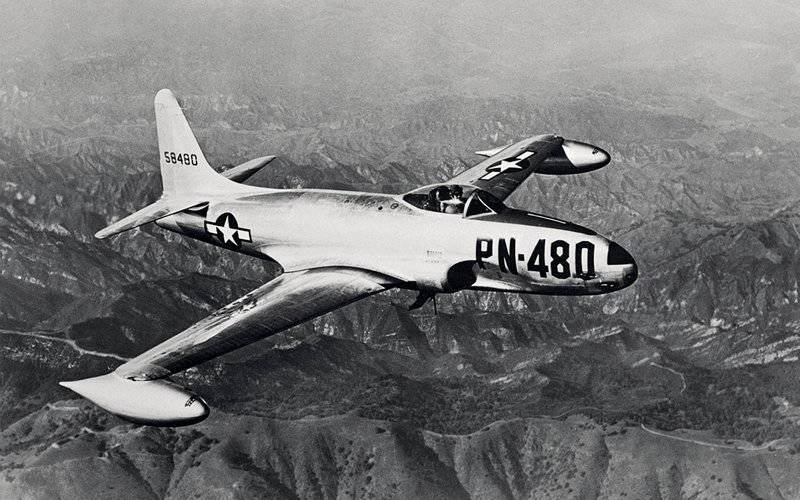 For the version of the fighter F-80A followed by two more - F-80B and F-80C. It was the last version of the aircraft became the most common in the American army. The F-80C was actively and widely used as a fighter-bomber during the Korean War. Only for 4 the first months of the conflict, these aircraft were able to perform 15 thousands of combat missions. American pilots believed this machine is ideal for carrying out attacks with a strafing flight. At the same time, the F-80 was ill-equipped to fight the piston North Korean Yaks, it could not withstand them on an equal footing due to the rather limited maneuverability.

The American F-80C Shooting Star fighter was a classic monoplane with a low-lying straight wing and a single-fin tail. Structurally, the fighter fuselage included 3 parts. Arms, pressurized cockpit and equipment were located in the forward part. On the first modification in the nose, a landing-taxiing light was installed, and on versions of the B and C fighter, a radar range finder AN / ARN-6. The middle part of the fighter fuselage was occupied by fuel tanks and air intake ducts. At the rear of the fuselage was a turbojet engine. Bottom under the cockpit were installed brake flaps with hydraulic drive. The design overload for the airframe was 11g.

The air intakes were located on the sides of the fuselage and had vertical cut-offs of the boundary layer of air. The fighter wing possessed a NACA 65213 profile. The internal volume of the wing occupied the fuel tank. The wing mechanization included ailerons and landing plates (the maximum deviation angle was 60 degrees). The landing gear was made tricycle with a nose wheel. The main landing gear was retracted to the fuselage, the landing gear was hydraulic. On the aircraft of the latest series was installed turbojet J33-A-35 company Allison, which was equipped with a centrifugal compressor. When water was injected into the compressor, the power unit reached 2450 kgf. The maximum supply of fuel located inside the fuselage of the fighter, was 2487 liters. 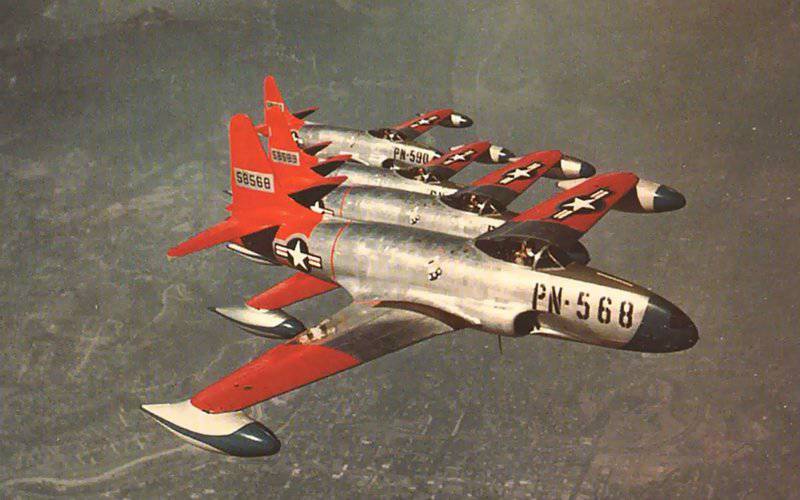 The built-in armament of the F-80 Shooting Star fighter included 6 large-caliber 12,7-mm M-3 machine guns, which have a rate of fire in 1200 fps / min. Ammunition was 297 ammunition per barrel. To ensure aiming in the cockpit mounted optical sight K-14. Also in the F-80B version, the aircraft had 2 underwing pylons, on which 8 NUR HVAR caliber 127 mm, 2 bombs 454 kg or 2 incendiary tanks with napalm with a capacity of 418 liters each were suspended. The F-80C version of the aircraft received another 2 additional pylon. The maximum payload of the F-80C version has reached 1850 kg. To record the effects of air strikes and firing at targets on the aircraft, the N-6 photo-pistol was installed.

The main problem faced by the first American fighter jets was the relatively short duration and range. In order to improve these indicators, American designers experimented with aircraft refueling in the air. So, in the center for the development of aviation technology, located on the Wright aviation base, several F-80C fighters were equipped with wing tanks, which had a receiving bar for refueling vehicles in the air. The project was recognized successful, and the Americans even managed to carry out the first refueling of the fighter in the air in the process of warfare, but ultimately, the refueling in the air for the F-80C fighters Shooting Star did not take root.

According to official American information, during operation, F-80 fighters managed to win 18 victories over enemy aircraft. All victories in the air were won during the Korean War from 1950 to 1953. In total, over the years of production, the American industry handed over to the 1718 military fighter aircraft of all modifications. Many of them after the end of active service were converted into target aircraft. 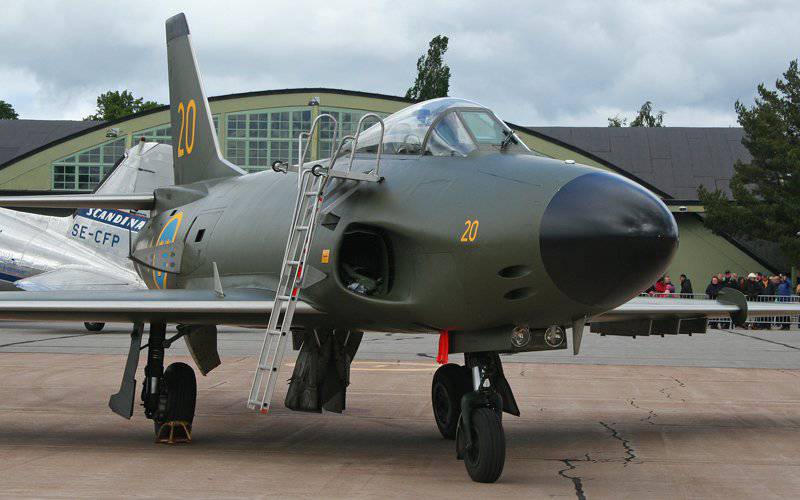 Ctrl Enter
Noticed oshЫbku Highlight text and press. Ctrl + Enter
We are
MiG-23 fighters in AfghanistanMiG-21 in Afghanistan
27 comments
Information
Dear reader, to leave comments on the publication, you must to register.