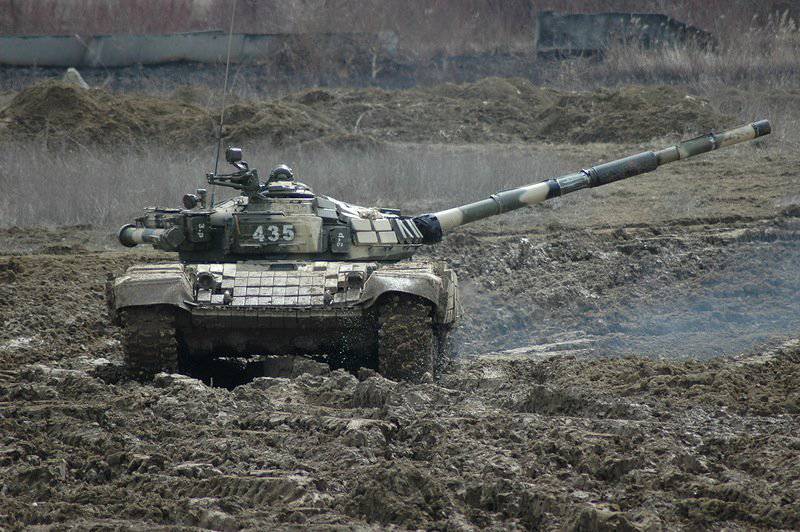 Long thought about the creation of this article, and yet thought up. In my opinion, the T-72 is the best tank in the world. As you already know, Western experts consider differently: "they say your bank is outdated and cannot be compared with our work of art called Abrams". But is it? Now we will understand.

T-72 was created as a deep modification of T-64, and T-64 was a real breakthrough in the world tank building, respectively, T-72 was ahead for many years of all its opponents.

The T-72 is a classic design, that is, a low silhouette and, accordingly, it is not so easy to detect. Armor (frontal) has a rational angle of inclination and has a sufficient thickness of 205 mm. The forehead of the tower from 305 mm to 410 mm, in addition, it has the shape of a hemisphere, which at times increases the chance of rebound. Boards and feed are also well protected. For Abrams, the situation is not so good, the thickness of the armor is very unevenly distributed: the hull is the 1 forehead meter, the beads and the feed are no more than 50 mm; completely irrational, right? Electronics and optics at the moment on the T-72 in TV is not bad, I would even say, not inferior to Western models. This is how our fighter is written on paper.

But the fight is completely different. And his tank baptism of fire went well. By the way, there is irrefutable evidence of a direct collision between T-72 and Abrams. It was in Lebanon back in the year 1982. According to the story of a Soviet military adviser, he and Syrian tankmen were circling around the seventy-twenties that had just been brought from the USSR in the region of southern Lebanon shortly before Israel’s aggression against this country (Operation “World of Galilee”).

The column, moving along the road, went around a large hill, and when the first tank, in which the narrator was located, began to leave the hill, then quite unexpectedly he found three unknown at a distance of about 800 meters tankthat were not like Israeli. These tanks also moved in a convoy and, finding Syrian vehicles, quickly began to rebuild in line for the attack. Unknown vehicles were the first to fire, our third tank, which had just left the hill, got into the tower. The tank did not penetrate the projectile, however, due to a strong dynamic impact, the car died out. The crew at the same time received a medium concussion. The second enemy tank, firing almost immediately with the first shot, hit the T-72 medium tank in the convoy in the stern compartment, disabling the engine.

Seeing such aggressive behavior of strangers, the narrator, being the commander of the tank, gave the order to open fire on the rightmost tank and, after his defeat, on the middle one. Here, the adviser noted the high proficiency of the Syrian gunner, who did not allow any delay during aiming and firing. It was decided to use BPS. Having made two shots with an interval of approximately 7 seconds, they achieved two hits, both of them to the towers. The third tank, which remained intact, retreated behind the two wounded, tried to evacuate the wounded and killed. However, I could not completely do this, since the T-72 opened fire from a coaxial machine gun. Having taken the wounded, the unknown tank quickly retreated.

Arriving at the wrecked vehicles and making sure that no one was dangerous there, the crew, getting out, examined the tanks. The doubts that these were not Israeli tanks were confirmed, since they did not resemble the Centurion, the M60, or the Merkava, which had just appeared, the adviser saw his photos and therefore could not confuse him. The form of the two killed tankers was also not similar to the Israeli one. They wanted to take one tank in tow, however, considering the remaining fuel (it was necessary to tow your tank too), we decided to get to the unit and report to the authorities about the location of the enemy vehicle, and then take measures to evacuate.

The contused crew, having regained consciousness, was able to start a tank, and the convoy moved back. However, the planned time for the route for technical reasons tripled, and the tanks arrived home only at night. Reported on the form of what happened, they decided to send intelligence immediately in the morning. However, there were many doubts that something would remain, which was confirmed the next morning. In the square where the battle took place, there were no wounded tanks, however there were many traces of wheeled vehicles, apparently tractors, which evacuated the tanks.

Subsequently, when comparing photographs of the identification of tanks with which the collision occurred, it was identified, surprisingly to many, by the American M1 Abrams. Apparently, he passed the test in Israel in order to familiarize the Israeli specialists with the tank, but why it was necessary to start the battle, if the tank was secret, no one understood. Some suggested that having a faster tank and, as the Abrams ’crews believed, a more reliable booking, they wanted to impose a battle at distances that were favorable to them and, if possible, take the trophy, because the T-72 was neither from the Americans nor the Israelis did not have. The outcome of this fight was left to the Syrians, which raised them to a higher level of security and efficiency weapons new Soviet tanks. And notice the facts about the high durability of our tanks: hitting the front of the tower did not disrupt it and did not cause an explosion of the ammunition, hitting the rear of our tank did not light it like a match, but simply disabled the engine, and that was that.

Chechen conflicts are another test for our tanks, where they showed themselves at a high level of combat effectiveness, namely, they successfully fought against the enemy’s anti-tank weapons. T-72 did not take the RPG and ATGM mines and grenades militants.

Iraqi conflicts. Not the best use of tanks by the Iraqi army led to their destruction. But the Americans claim that they were the Abrams who destroyed our tanks. But the whole point is that Americans from the time of World War II love to use Aviation in order to destroy a stronger enemy, thus, most of Iraq’s wrecked tanks were destroyed by aviation. In addition, low personnel training affected this.

The current civil war in Syria shows how strong our tanks are - this is irrefutable proof.

The combat experience of the T-72 is the largest among all tanks of the post-war generation, and it is irreplaceable. And this is one of its main advantages over the American. Maintainability is another important factor. T-72 is easy and quick to repair in most cases without repair crews, and try to repair the gas turbine of Abrams four of us (the crew of Abrams is a 4 person) - no, it will not work. Ours is cheap in production, and it is numerically superior to American. I will say briefly about the automatic loader: this thing improved the survival rate of the personnel as a whole, since the crew decreased per person. Well, perhaps I have brought enough arguments in favor of our tank. The next step in tank building will be Armata’s combat platform, but this is a completely different one. история...

Ctrl Enter
Noticed oshЫbku Highlight text and press. Ctrl + Enter
We are
Is the "old" well forgotten to become the "new"? Part-2. At the call of honor and dutyT-72B vs M1A2 "Abrams"
218 comments
Information
Dear reader, to leave comments on the publication, you must to register.