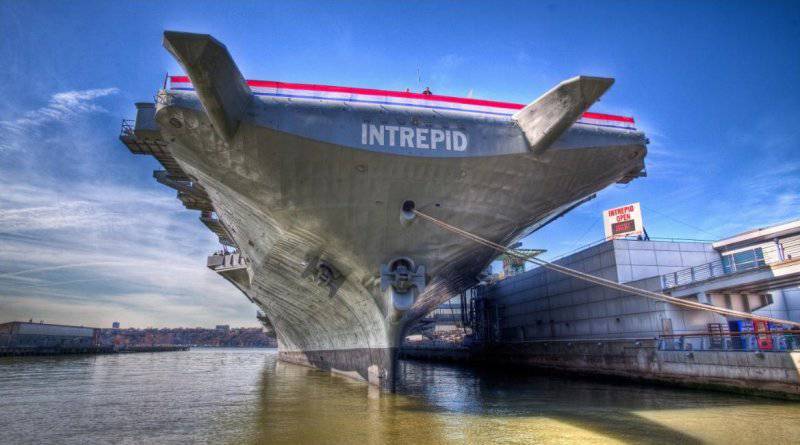 The Intrepid Museum of Naval and Aerospace Engineering is located right in the center of New York, on Manhattan. West Side, Pier No. XXUMX. The museum complex was founded in 86 by the initiative of millionaire philanthropist Zakaria Fischer and became world-famous for his rich collection of equipment of all times and peoples.

Today the museum is a jetty with an aircraft carrier and a submarine. The flight and hangar deck of an aircraft carrier are heavily lined with airplanes, many of which never took off from the deck of a ship. In addition to the aircraft, there are landing capsules of Russian and American spacecraft, as well as a pavilion with the shuttle Enterprise. Next on the pier is an airliner "Concord". From the womb of the moored submarine sticks out the Regul cruise missile. This, in brief, is a general view of the Intrepid Museum.

All equipment presented in the exhibition is real. In addition to familiarizing themselves with the aircraft on the upper deck, viewers can descend into the aircraft carrier and submarine and inspect the hangar, personnel quarters, the bridge, the commander’s cabin. Steep narrow ladders of warships, abundance of aisles and equipment sticking up everywhere: children up to 16 years without an adult are not allowed to enter the museum complex. The cost of an adult entrance ticket is 31 dollar, which is very much even by the standards of New York, where admission to many museums is free.

The main exhibit is undoubtedly the USS Intrepid (Fearless), one of the 24's Essex-type aircraft carriers from the Second World War. These ferocious combat vehicles were created in an era when the cruising speed of piston aircraft did not exceed 500 km / h, and the combat radius was 300 miles. It was necessary to carry an aerodrome everywhere. 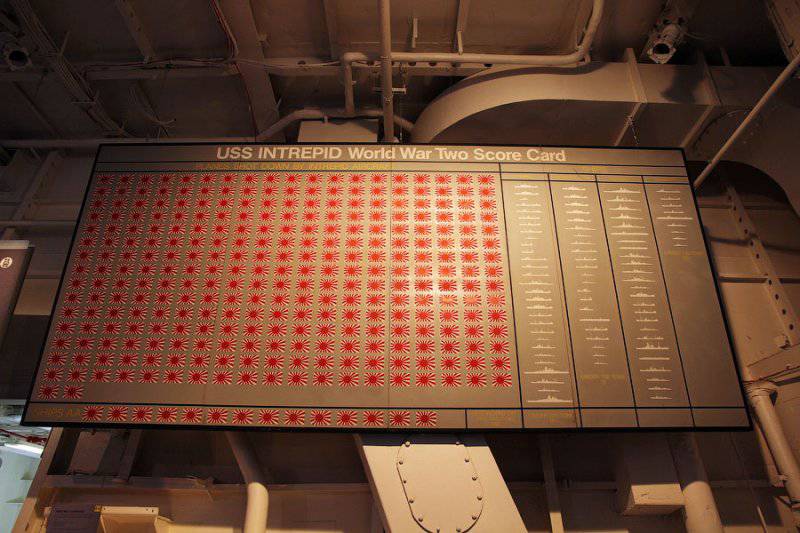 Service record of the Intrepid aircraft carrier. Downed Japanese aircraft, sunk and damaged ships.
Intrepid was laid on 1 on December 1941 of the year, launched and put into service on 1943. 260 length meters. Full displacement over 36 thousand tons. The ship managed to make war at the final stage of the Second World War - its pilots had a chance to see the Yamato and Musashi superlinkers, take part in the battles in Leyte, in a raid on Truk, attacks by Japanese positions on Kwajalein Atoll, in Micronesia, on Formoza ), on the island of Okinawa. The aircraft carrier survived five kamikaze attacks, but, despite serious damage, he returned to service every time.

After the war, Intrepid was modernized, received a corner flight deck and headed for the shores of Korea. He carried out the blockade of Cuba during the Caribbean crisis. After he went to fight in Vietnam. He performed tasks in the interests of NASA - he was looking for splashed descent vehicles with astronauts in the ocean. By the end of the 60s, his deck was too short for jet fighters - the Intrepid was retrained as an anti-submarine ship and sent to serve as part of the Sixth fleet to the shores of Europe. Finally expelled from the Navy in 1974.

Despite its “museum” status, Intrepid still retains its practical significance: after the September 11 attacks, 2001 hosted the FBI operational headquarters on its board. Currently, the rusted ship hull is a backup center for emergency services in New York. 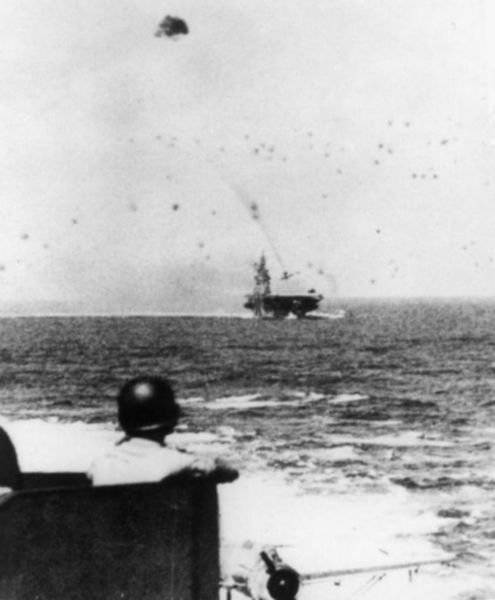 A sailor from the battleship New Jersey watches the kamikaze swoop on the deck of the Intrepida, November 25 1944. The victims of the explosion will be 65 seafarers from the crew of the aircraft carrier, "Intrepid" will leave the combat zone and go for a long repair in San Francisco.

Today on board the floating museum "Intrepid" are 34 samples aviation equipment, including:

- supersonic high-altitude reconnaissance A-12 - a prototype of the famous SR-71 "Blackbird";

- the multi-purpose fighter "Kfir" of the Israeli Air Force; 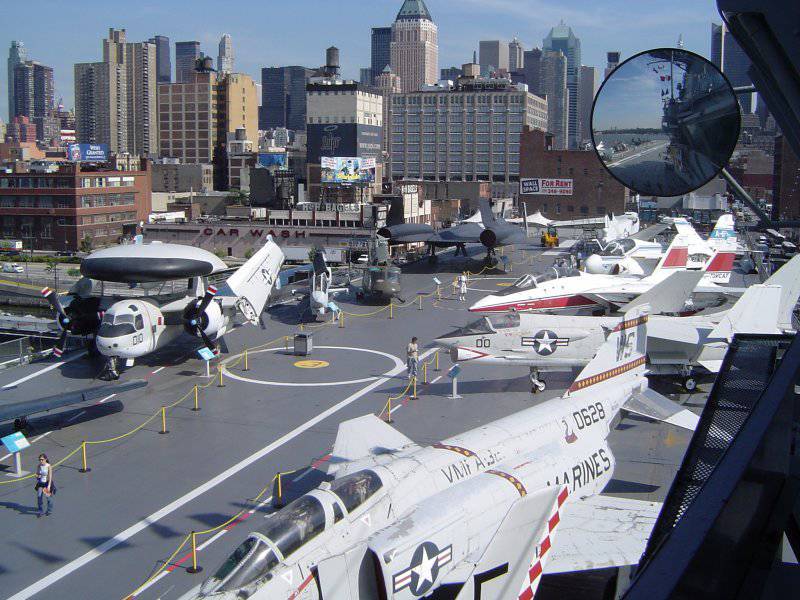 In the foreground - "Phantom". In the distance, the DRLO aircraft, A-12 reconnaissance aircraft, Kruseyder, Tomket fighters, and Intruder attack aircraft are visible. Helicopters - Cobra and Iroquois.

The Yankee has a sense of humor. Opposite the MiG is parked its irreconcilable opponent - the F-4 "Phantom" fighter.

Airplanes lined up nearby:

- a plane with a vertical take-off of AV-8C - a licensed version of the British SiHarrier;

Next to the aircraft are 7 rotary-winged machines: Bell 47 during the Korean War, Iroquois from the jungles of Vietnam, army AN-1 Cobra, next is another Cobra - modification of the Marine Corps AH-1J. A couple of relics half a century ago are military transport helicopters H-19 and H-25. Among the turntables stands out a bright coloring search and rescue Sikorsky HH-52 "Sigardian."

Another masterpiece of design thought stands on the quay - the supersonic passenger liner “Concorde” of British Airways. It was this aircraft (reg. Number G-BOAD) set a record among passenger planes in 1996, having flown the Atlantic in 2 hours 53 minutes.
Under the wing of the "Concord" put on public display his engine - the Olympus 593. 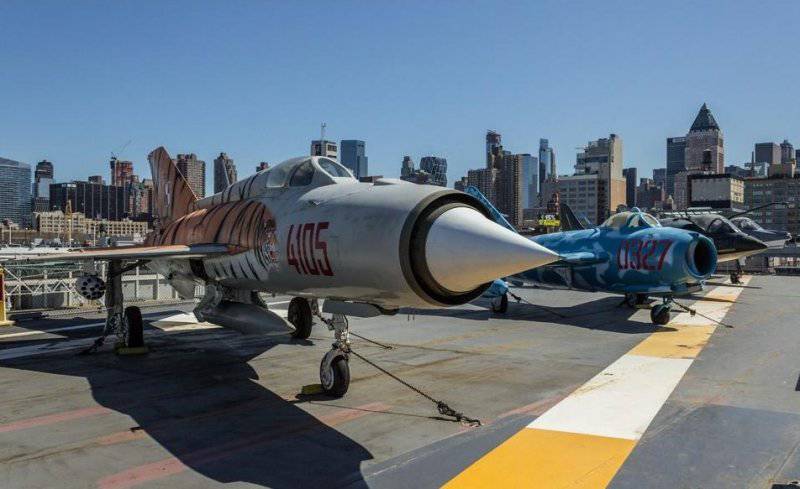 Senator McCain's nightmare: the MiG-21 against the backdrop of the skyscrapers of New York. MiG-17, AV-8C Harrier II and French Dassault Étendard IV lined up in a line. 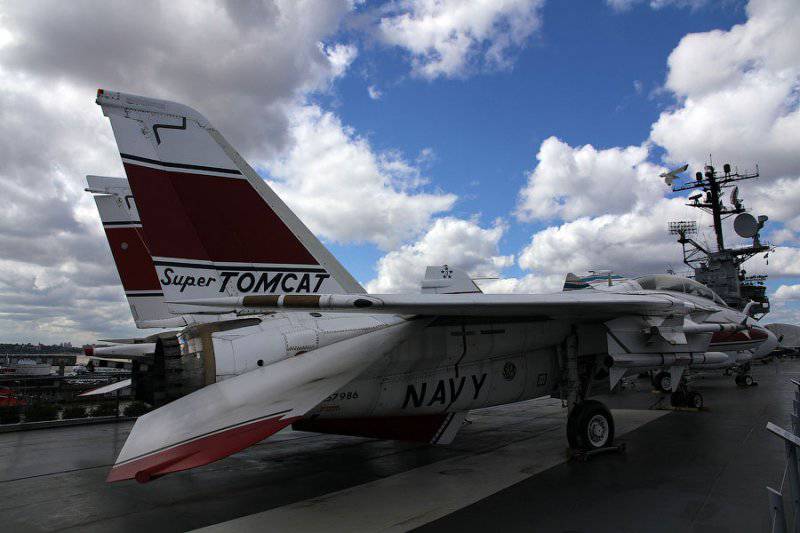 Tomcat F-14. Double deck interceptor with variable geometry wing. The heaviest aircraft carrier-based aircraft with an take-off weight in excess of 30 tons. In the period from 70-x to the beginning of the XXI century, "Tomkat" was the basis of air defense AUG. 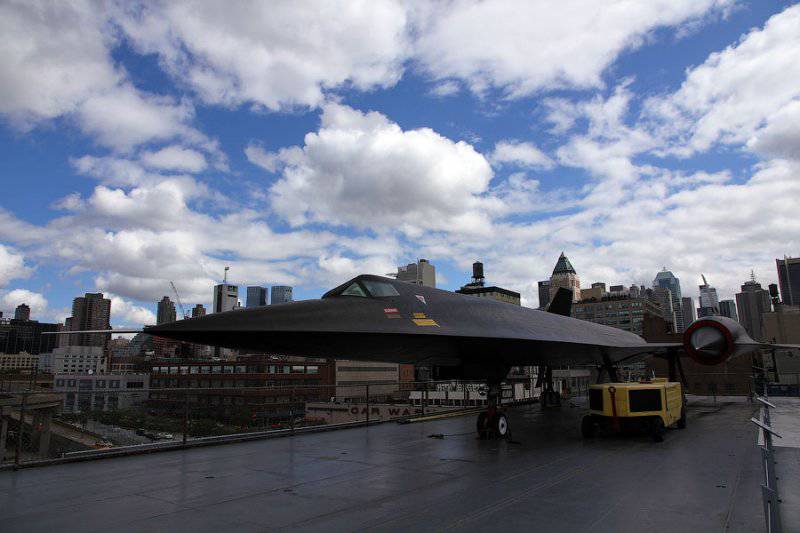 Lokheed A-12. Fantastic reconnaissance aircraft capable of flying at altitudes up to 25 km at speeds in excess of 3000 km / h. It was created in 1962 year in the interests of the CIA. He made reconnaissance flights over North Korea and North Vietnam from the Okinawa airbase. The design of the super aircraft served as the basis for the creation of the SR-71. 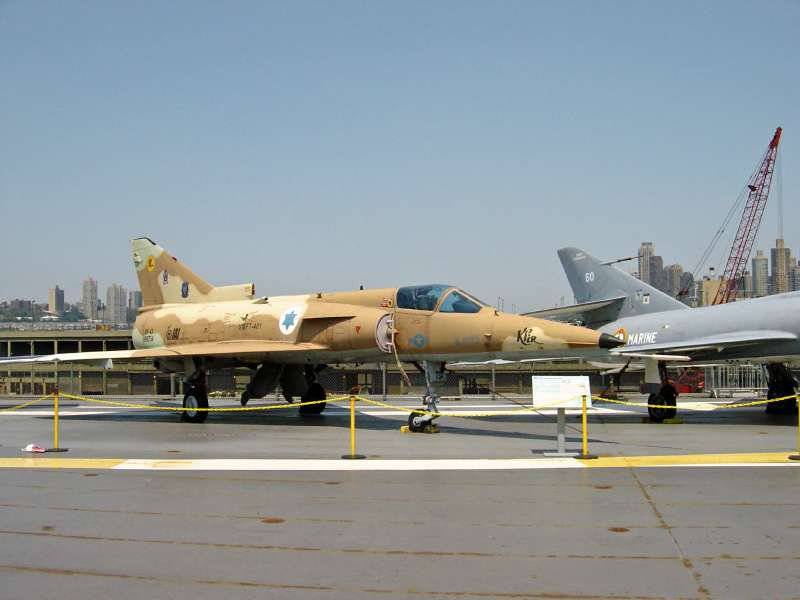 Israeli IAI Kfir ("Lion"), it is the modernized French "Mirage 5" with an Israeli engine and electronics. The technique of the end of 70's. 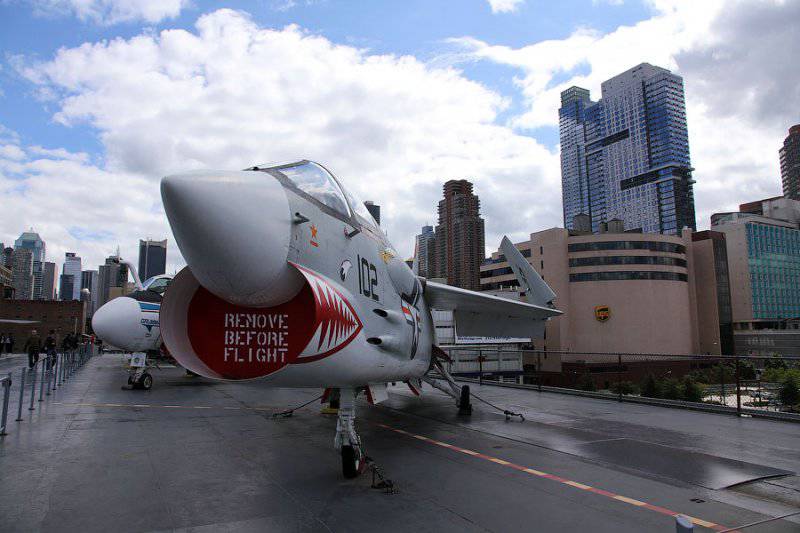 F-8 Crusader ("Crusader"). Supersonic deck interceptor, the only aircraft in stories with variable in flight angle of attack of the wing. According to official data, he had a better ratio of air victories and losses in the sky of Vietnam than the more advanced, but heavy "Phantom". It was operated in the Navy until 1976, and in the version of the RF-8 photo surveyor - until March 1987. As part of the French Navy served until the end of the century. The successful scheme of the aircraft served as the base for the creation of the A-7 “Korsar II” light ground attack aircraft. 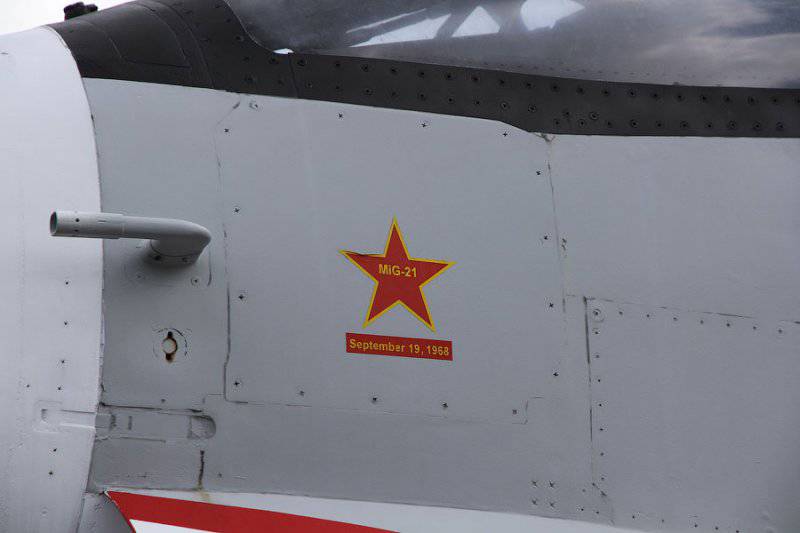 The mark on board the "Kruseydera" about the downed MiG. 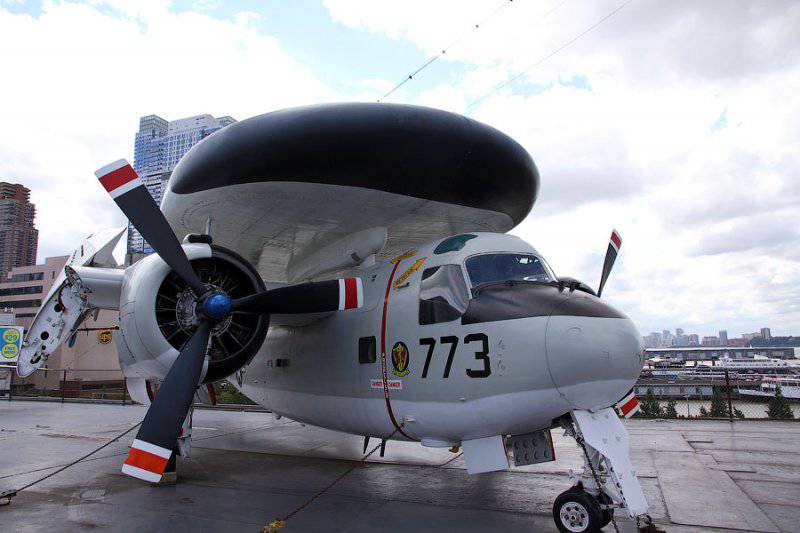 Deck plane DRLO E-1 Tracer ("Pathfinder") - the "eyes" of the American fleet in 60-s. Radar AN / APS-9 is hidden in the teardrop-shaped 82-meter fairing above the fuselage. 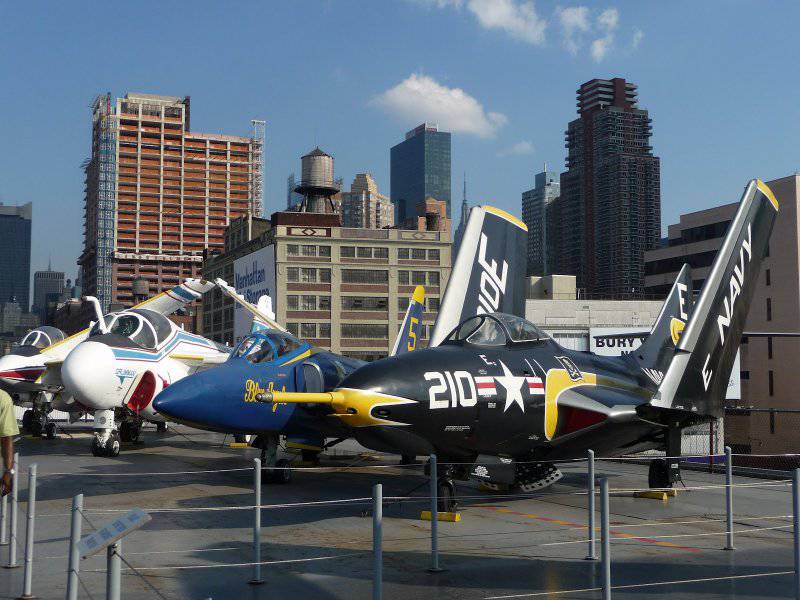 In the foreground is the F9 "Cougar" carrier-based attack aircraft of the Korean War. Behind - the Fighter "Tiger" F-11 in the traditional blue and gold Blue Angels. Next - a powerful subsonic attack aircraft A-6 "Intruder" (was in service with the Navy and the International Police Commission from 1963 to 1997). In the distance, there is a fat cat face. 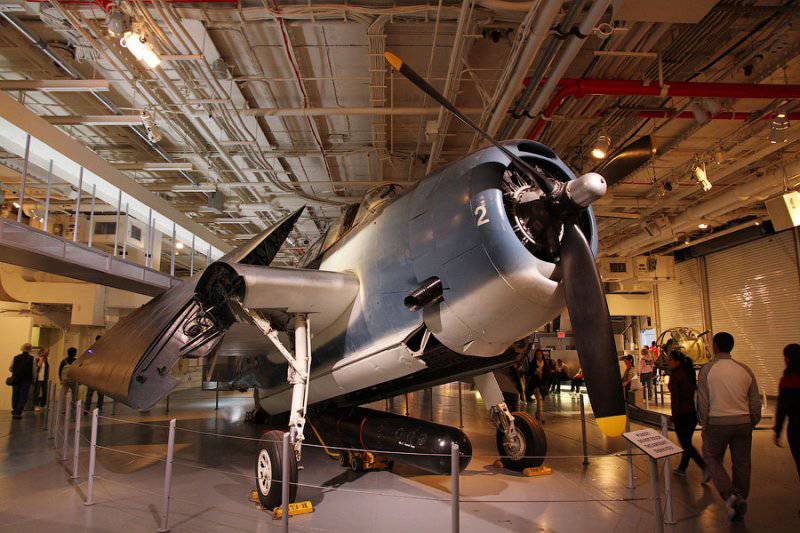 TBM Avenger. The main deck torpedo brigade of the US Navy during the Second World War 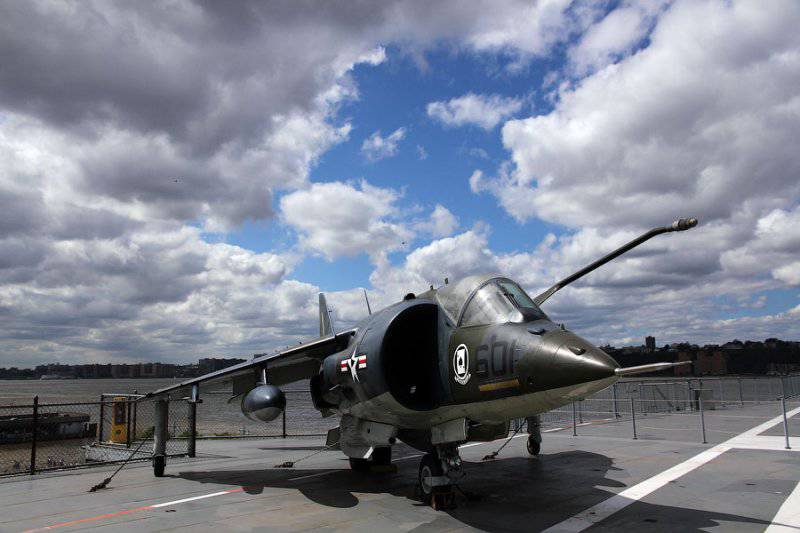 Vertikalkka AV-8C Harrier II. Attack VTOL are still in service with the Marine Corps aviation. F-35B is being created as their replacement. 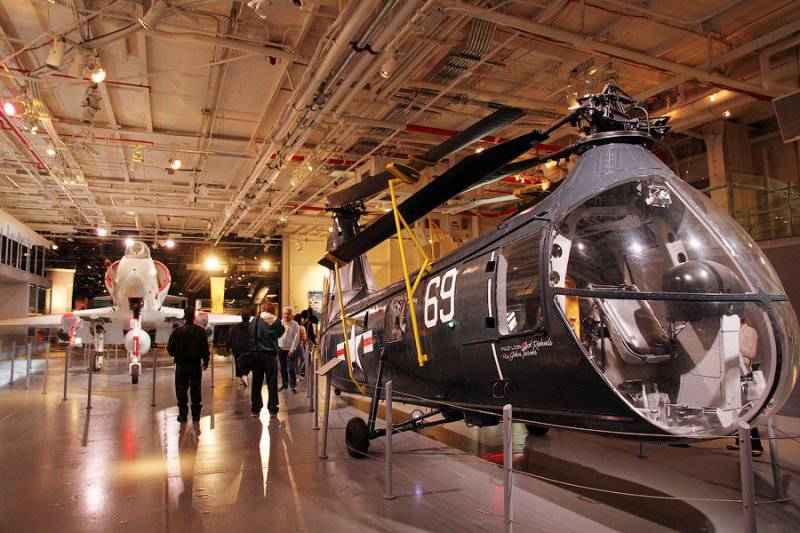 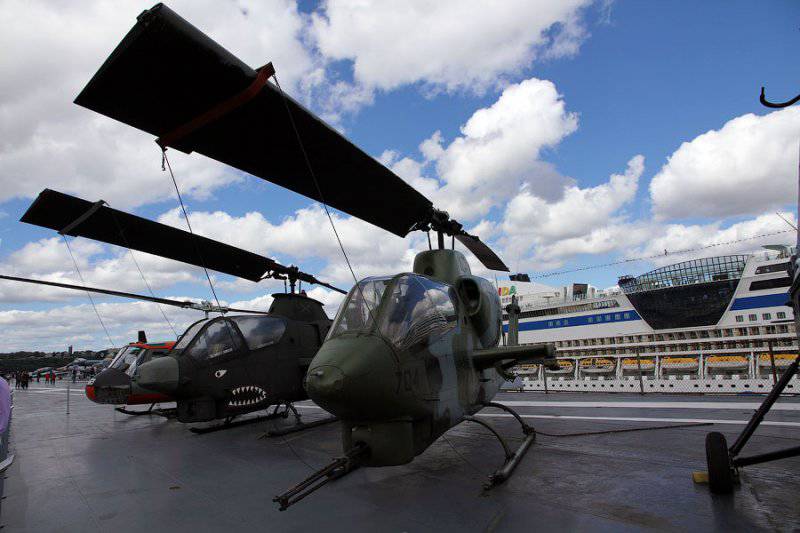 The collection of aircraft from the Intrepid Museum is complemented by spacecraft:

- the descent module of the Soyuz TMA-6 spacecraft. Real, burned by the hellish flames upon returning to Earth. Soyuz TMA-6 made an 180-day expedition to the ISS from April to October 2005;

- Since July, 2012, the museum exhibits a space shuttle Enterprise. The first of the family of reusable spacecraft, despite its external identity to other space shuttles, has never been in space (the attentive eye will quickly notice that it lacks thermal protection and maneuvering LREs). The “Enterprise” was used only for test flights in the atmosphere and testing landing elements. After the death of the Challenger, it was decided to compensate for the loss by including the Enterprise in the ranks of the operating space shuttles. Alas, these plans did not come true: the replacement of the new "Endeavor" was built. 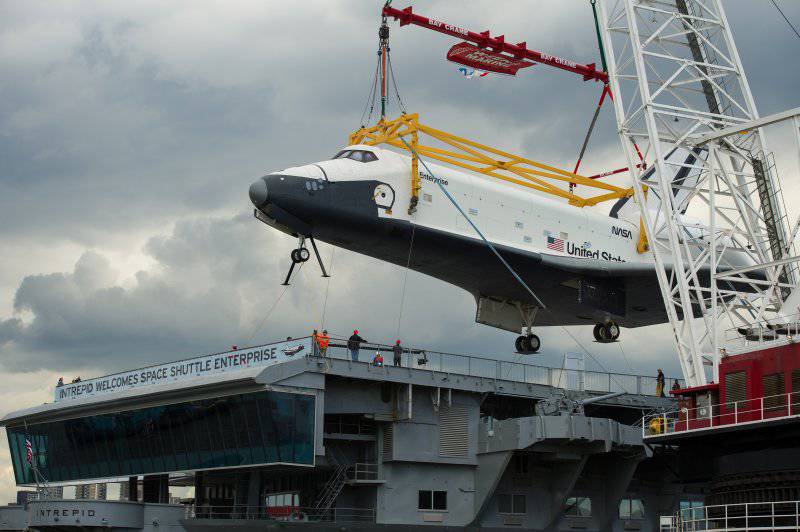 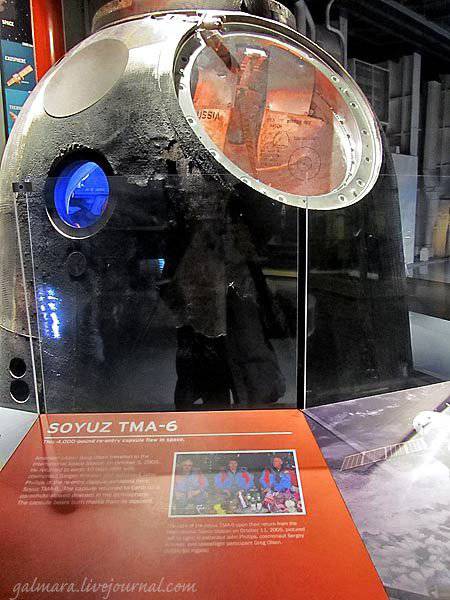 In addition to the aircraft carrier and a variety of aircraft, the collection of the museum "Intrepid" includes an underwater warship - a USS Growler submarine. 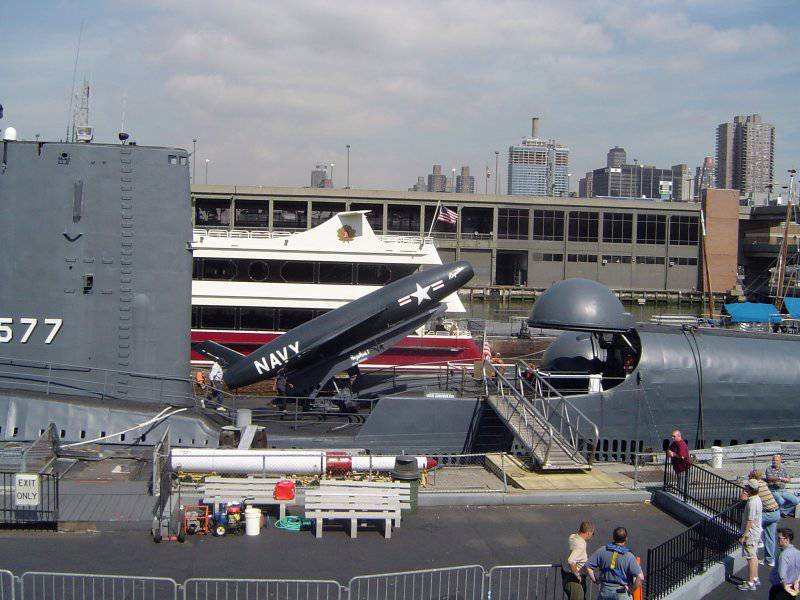 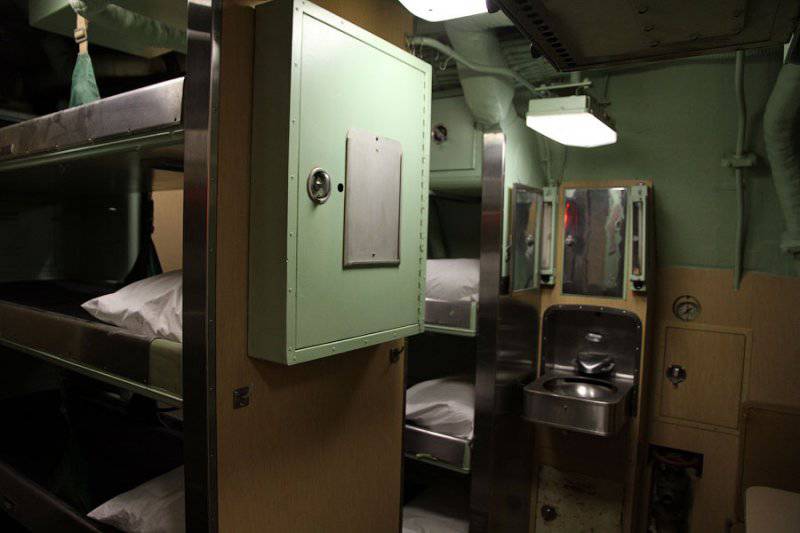 Aboard a submarine
Growler was laid in 1954, launched in 1957. Armament - 8 torpedo tubes, 2 launchers with 4 rocket ammunition. The sea cruise missile SSN-8-M Regulus was a subsonic ammunition 6 tons with a range of 900 km. The missile was equipped with a special warhead power 2 MT. The launch was made from the surface position with the help of two powder accelerators on the sides of the rocket. The development of the system was the "Regulus II" with doubled speed and range.


Thus, weapons It was supposed to bombard the coastal areas of the USSR. The “Growler” boat was approaching the borders of our country nine times, but the order was never received ... At the beginning of the 60's, with the appearance of the “Washington” and the Polaris SLBMs, the outdated and unreliable Regul system was removed from service. Since 1964, the boat Greybeck 20 has stood in reserve for years until it became part of the exposition of the New York museum.

This is, in short, an excursion to the Intrepid Sea, Air & Space Museum. An interesting place that gives a fairly extensive view of the American navy. 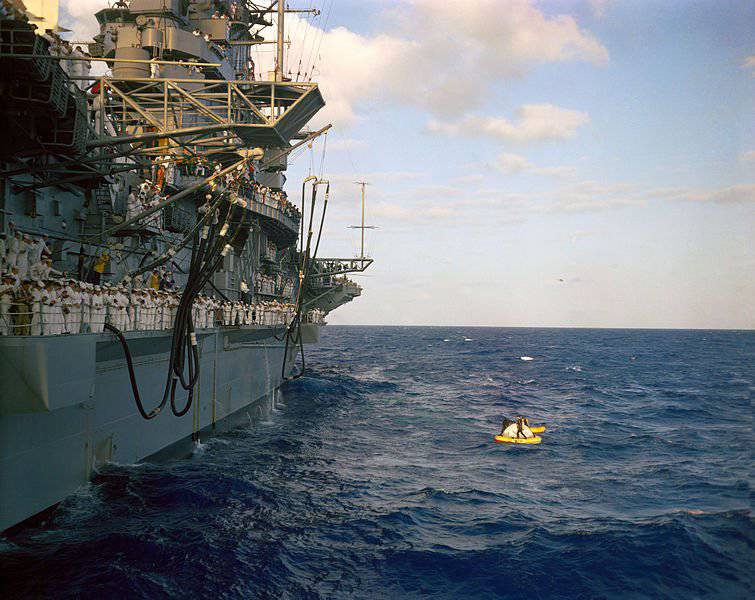 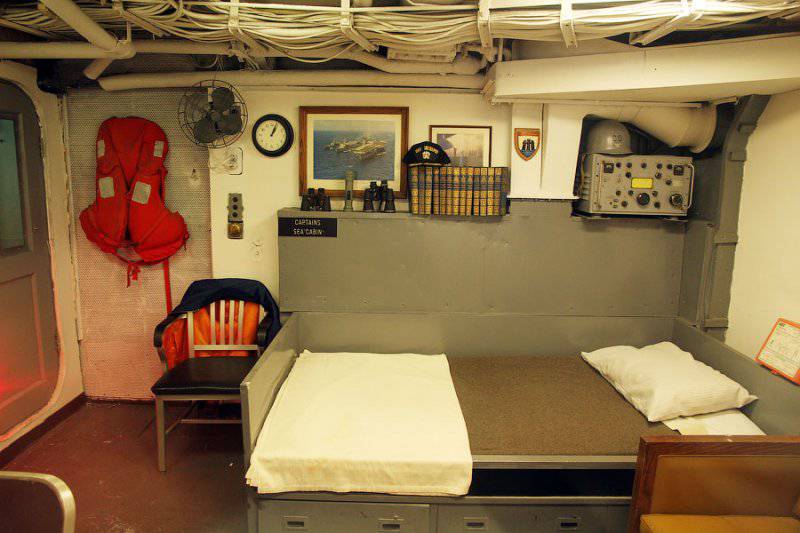 Apartment aircraft carrier commander. All strictly and seriously, as befits a warship. 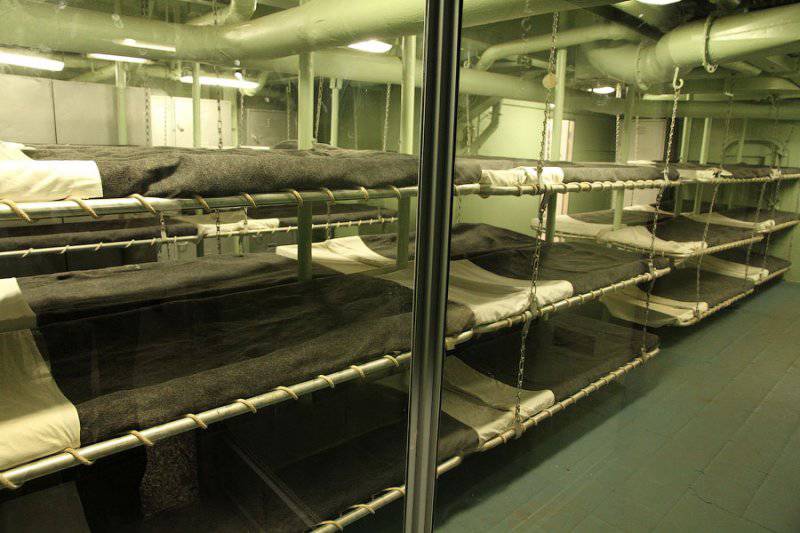 There is an opinion that in the past the ships were wooden, and the people - iron. Now is the opposite. In any case, the living conditions on board the Intrepida are far from modern standards. Even on such a huge ship there was not enough space: the crew of the aircraft carrier consisted of 2500 + people. 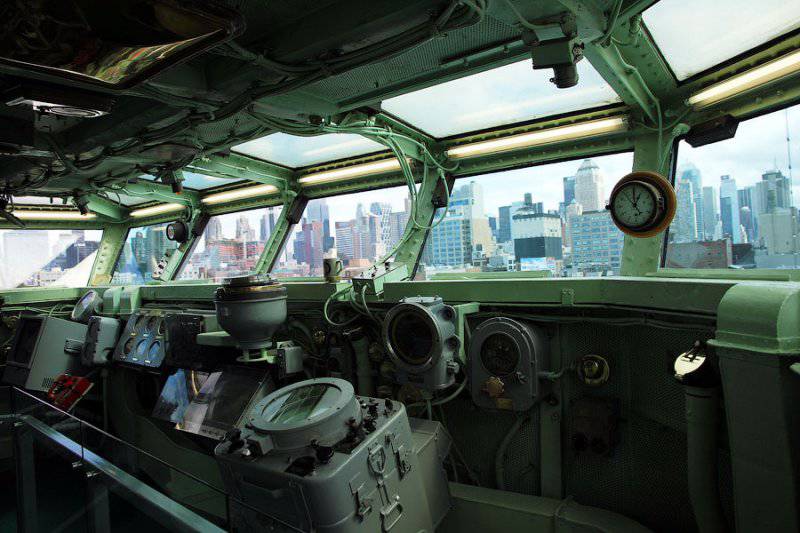 Bridge. From here, an impressive panorama of a full-speed carrier connection opened up. 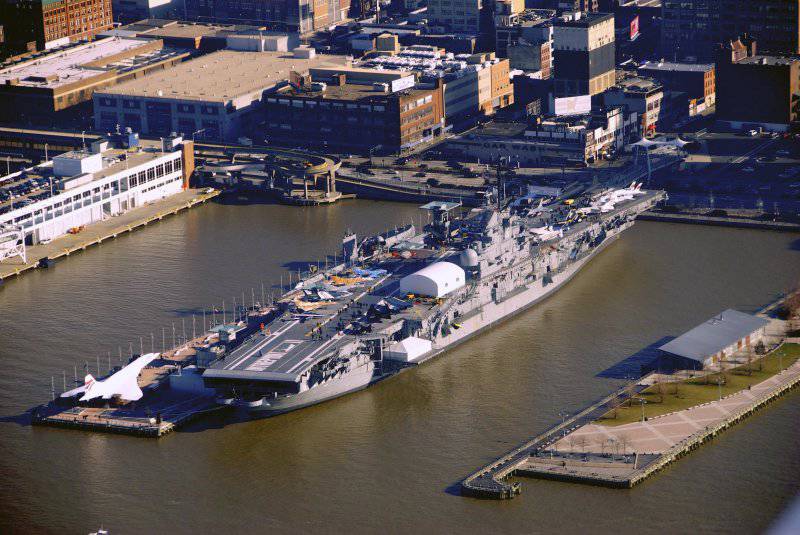 Ctrl Enter
Noticed oshЫbku Highlight text and press. Ctrl + Enter
We are
Mystic low pass. How to contact a submarine?Goodbye Enterprise!
55 comments
Information
Dear reader, to leave comments on the publication, you must to register.