The weapon of the century. The best small arms in 100 years 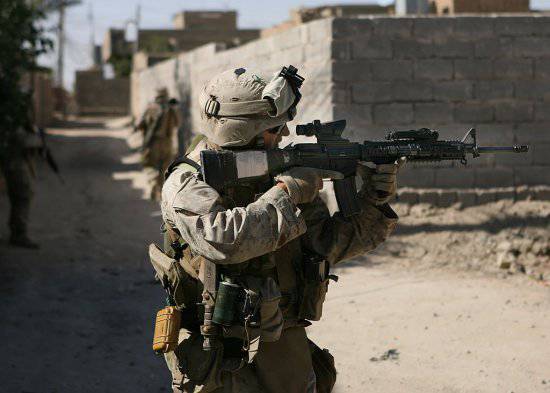 The most common rifle: M16

The rifle was developed by the American company Armalite, in 1959, the company Colt began its production, in 1961, the US military purchased an experimental batch of rifles, and in 1964-m it entered service in the US Army. Up to this day, the M16 remains the main armament of the American infantry. The first serious baptism of fire she received in Vietnam, and later used in all armed conflicts involving the United States. This is an automatic rifle caliber 5,56 mm; its automation is based on the use of the energy of powder gases. To date, there are more than 20 modifications and varieties of the rifle, and it is produced not only in the USA, but also in Canada, South Korea, China, Iran, and Germany. 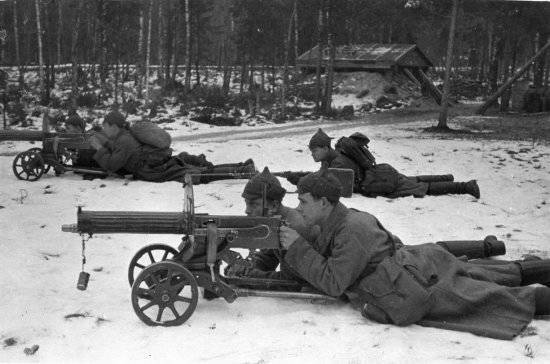 It is difficult to say that “Maxim” is on the list of the best rifle weapons for 100 of the past years, after all, the Anglo-American inventor Maxim Hyrum received the first patents on certain elements of the new weapon in the summer of 1883, and in October 1884 showed the first valid model. But one of the most famous varieties of “Maxim” appeared in the 1910 year, which allows it to “fit” into the century.

The principle of "Maxim" is simple and based on the use of recoil barrel. Powder gases from the shot throw the barrel back and activate the recharging mechanism: the cartridge is removed from the tape and goes into the breech, at the same time the shutter is cocked. The 450 cartridges were placed in the canvas ribbon, and the machine gun fire rate reached 600 rounds per minute. True, the powerful weapon was not perfect. Firstly, the barrel overheated and demanded a constant change of water in the cooling jacket. Another disadvantage was the complexity of the mechanism: the machine gun stuck because of various problems with reloading.

In Russia, the production of a machine gun began in the 1904 year at the Tula plant. The most famous Russian modification of Maxim was the 7,62-mm heavy machine gun of the 1910 model of the year (the initial caliber of the machine gun was .303 British or 7,69 mm in the metric system). In the same year, the designer, Colonel Alexander Sokolov, designed a wheeled machine for a machine gun - it was this machine that gave the weapon a classic look. The machine seriously facilitated the march and the movement of a heavy machine gun from position to position.

But the total weight of the machine gun with the machine was still great - more than 60 kg, and this is not counting the stock of ammunition, cooling water, etc. Therefore, by the 1930 years, the formidable weapon was rapidly becoming obsolete. The last modernization of the Soviet-style machine gun survived in 1941 year and was made in Tula and Izhevsk until the very end of the Second World War; He was replaced by 7,62-mm machine gun Goryunova.
Maxim had many modifications: Finnish M / 32-33, English Vickers, German MG-08, 12,7-mm (large-caliber) for the British Navy, etc. 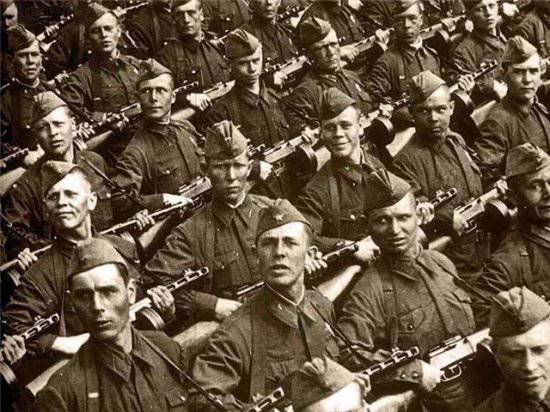 The most legendary weapon of the Second World War: 7,62-mm Shpagin submachine gun

The predecessor of the Kalashnikov assault rifle in service with the Soviet army was the Shpagin submachine gun (PPS). Created to replace the Degtyarev submachine gun, the PCA was primarily designed to make production as simple as possible and entered service in the 1941 year. And although as the best submachine gun of the Second World War, the design of Sudayev of the 1942 model of the year (PPS) is often considered, the PCA became an integral part of the image of the Soviet soldier as the only mass automatic weapon of the Soviet army of the first year of the war. 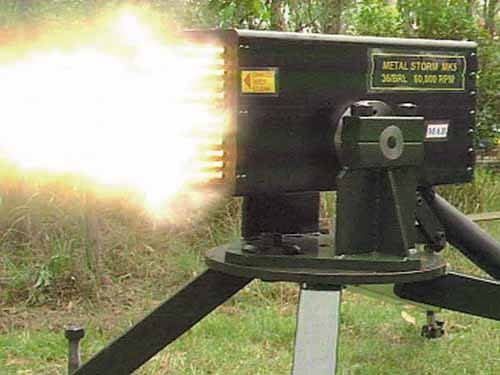 The super-fast weapon of the Australian company Metal Storm Limited is unlikely to ever get into mass production, but it is impossible not to mention it. Company founder James Michael O'Dwyer invented and patented a system of high-speed fire, the theoretical rate of which reaches 1 000 000 rds / min. There are no moving mechanical parts in the Metal Storm machine gun, several cartridges are simultaneously in each of the barrels, and shots are made by means of an electronic pulse. A critical problem faced by the developers was the impossibility of timely filing such a number of cartridges. Therefore, the rate of fire shown in the tests is calculated, and the functionality of the "iron storm" is reduced to nothing when used in actual combat. However, the company is developing in various directions and uses Metal Storm technologies in weapons, which have a more realistic chance of getting into the series. 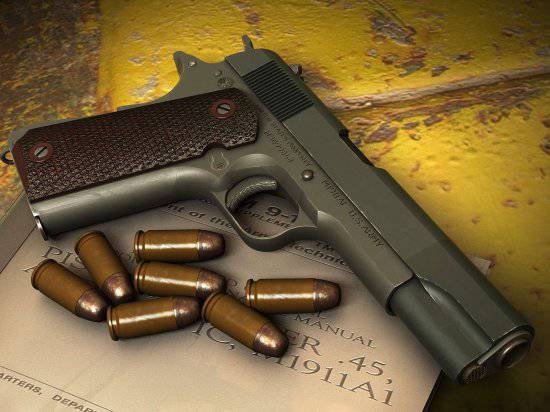 One of the most popular pistols in the world is the John Browning M1911 chambered for .45 ACP (11,43 x 23 mm). This weapon was in service with the US Army from 1911 to 1990 a year, and since 1926, the gun has not been subjected to any upgrades. Despite the developer’s last name, the gun was produced by the Colt plants and entered history just like the Colt M1911. Its main advantage was constructive simplicity and fault tolerance. The gun was in service in more than in 40 countries of the world and is very popular to this day. 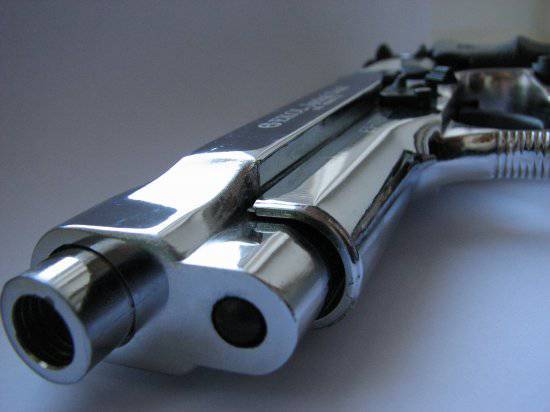 RECK Miami 92F is a gas pistol made by the German company Umarex, which is an exact copy of the classic Beretta 92 pistol. RECK gas guns come in 8 and 9 mm. The 9-mm version has quite a regular 11 magazine for cartridges, but the RECN Miami 8-mm magazines can hold 18 to 28 (!) Cartridges, depending on the version. Aside from the prototypes, the curiosities and the 40-cartridge shop for the Mauser, there are no competitors in the field of multiply charged RECK Miami 92F. 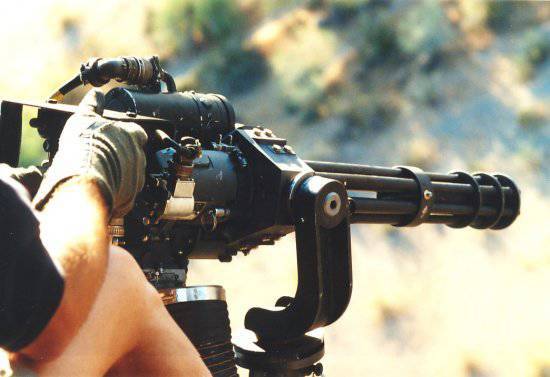 Of course, prototypes can be much more rapid-fire, but among the serial weapons, some of the champions in this indicator are considered aviation machine guns of the M134 Minigun series. These 7,62-mm six-barrel machine guns operate according to the Gatling scheme and are capable of producing up to 6000 rounds per minute. A new cartridge is fed into the upper (cooled down) barrel, a shot is fired from below. The rotation of the trunks is provided by an electric drive. Baptism of fire M134 received in the Vietnam War. By the way, contrary to misconceptions, the “Predator” and “Terminator” use not this machine gun, but his younger brother XM214 Microgun, who did not go into the series. 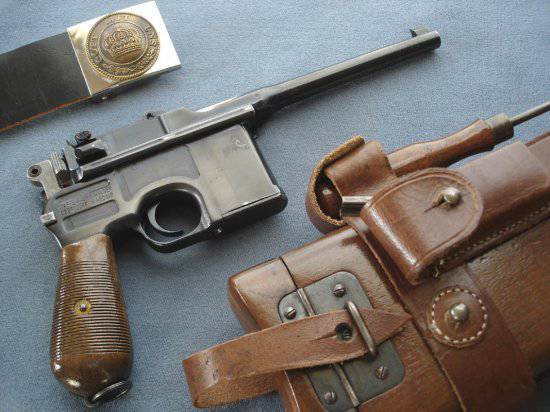 Mauser C96 gives us a strong association with a man in a leather jacket and an abbreviation of the Cheka. This model was started in Germany in 1896; the pistol was distinguished by excellent accuracy, high effective firing range, and “survivability”; its main drawbacks were bulky and serious mass. Surprisingly, the Mauser was not officially in service with any army in the world (maximum - partial local use), more than a million copies were produced, and officers from different countries preferred it as personal weapons to all competitors.

The American M1 Garand rifle is the first self-loading rifle adopted as the main infantry weapon. It took root a long time: in 1929, the designer John Garand built the first prototype, but it did not make it to the 1936 year before mass production and putting it into service; numerous improvements did not give the desired effect, and the new weapon was constantly denied. Popularity gained only the generation M1, modified and put into series in 1941 year. As a sporting weapon used to this day. 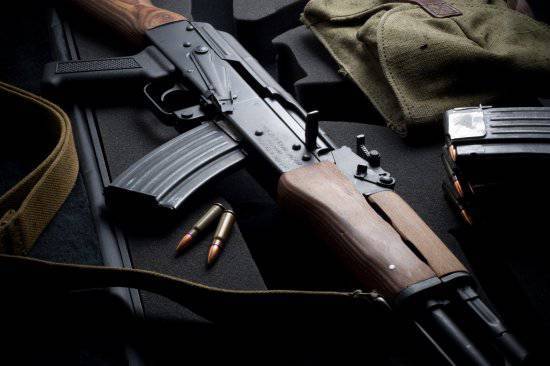 The Kalashnikov assault rifle, the most common small arms in the world, due to its reliability and ease of maintenance, gained extraordinary popularity and was released in quantities of more than 100 million copies. There are several dozens of its modifications; in the original version (AK-47), it had a caliber 7,62 mm, but in the modification AK-74 a 5,45-mm cartridge is used, and in versions of the “hundredth” series - also 5,56 mm. In addition to the USSR, the machine guns were made by Bulgaria, Hungary, the GDR, China, Poland, North Korea, Yugoslavia, and it was used in almost all countries of the world and in almost all armed conflicts of the second half of the 20th century.