November 18 2013
24
Despite the general skepticism about the Georgian firearms arms It should be noted that gradually the samples that are developed and manufactured, become better and better. We will not touch the topic, for what reason it happens and with whose help, but rather we will analyze one of the quite good samples of a large-caliber sniper rifle chambered for 12,7x99 and 12,7х108. However, the design of the weapon is quite simple, and everything depends only on the quality of materials and the quality of processing, moreover, the tasks that the designer of this sample set for himself are more suitable for the MFR, and not for the CWS, but the main thing is that the weapon was created in according to our plans.

First of all, it must be said that not every large-caliber sniper rifle is a sniper rifle, and even the presence of an optical sight does not make it so. Despite the fact that anti-tank guns have long since disappeared as a class, but among modern large-caliber women’s bogies, you can absolutely accurately identify them. And near them really will be long-range sniper rifles, a large caliber which is determined by the fact that a light bullet for long distances flies very reluctantly. The Barbalo B213 large-caliber rifle, considered in this article, is more likely to refer to MFR than to sniper rifles. The main targets of a person armed with this device are light armored vehicles, radar stations, and in rare cases, the living force of the enemy. Proof of this can be the fact that, despite the single-charged weapon, its device is such that ultra-accurate shooting is virtually impossible, since the design has a spring for damping recoil. Thus, the weapon stops kicking, but at the same time it seriously loses accuracy, which is noticeably noticeable even at medium distances, but about the design features just below. 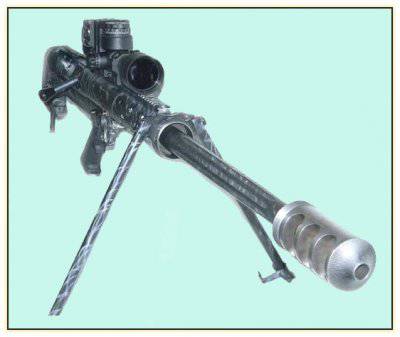 The appearance of the device is quite ordinary. Despite the fact that the weapon is made in the layout of the bullpup, it is not remarkable for this, since recently this arrangement is quite common for large-caliber sniper rifles. Thanks to this arrangement, the rifle becomes more compact, but at the same time the weapon loses convenience when reloading, since the shutter handle is located not just in the face of the shooter, but actually at his ear. This feature of the weapon is especially critical against the background of the fact that the rifle is single-shot. On the other hand, the reloading of weapons can be charged to the “second number”. Thus, it is safe to say that one single detail, which was supposed to be comfortable, was successfully locked up, but the weapon is more compact and lightweight compared to large-caliber rifles in the classic layout. In general, if we speak only about the appearance, the B213 rifle looks quite powerful and formidable with a minimum of frills. A large muzzle release recoil brake immediately gives a large caliber to the weapon, but the effectiveness of this DTC is questionable.

In proof that the muzzle brake-compensator recoil is not the most effective, you can bring the design of the weapon itself. So, in addition to the DCT, to reduce recoil when firing a weapon has a recoil spring, which is compressed when fired. In other words, it turns out that the rifle has a moving barrel, which itself has a negative effect on the accuracy of fire, but the weapon behaves more calmly when firing. Strangely enough, but many manufacturers managed without it, and the weapon was obtained with a powerful but quite tolerable return. It is clear that the weapon is more convenient and comfortable to use, the better, but only when it does not go to the detriment of the characteristics.

Separately, it is worth noting that the rifle can be fed both with domestic 12,7 cartridges and with ammunition of the NATO standard, which itself speaks of the accuracy of the vehicle. Nevertheless, the optical sight on the weapon is hung up and even declare a practical distance of firing up to one and a half kilometers. At the same time, along with these characteristics, armor-piercing at a distance of 91 meters is separately noted. True, it is not clear how sideways armor-piercing relates to a rifle, since this is a merit of more ammunition, not weapons, but not the essence. You need to pay attention to the goals that the designer set himself, namely the defeat of lightly armored vehicles and enemy manpower in the means of individual armor at medium distances. It is for this reason that it is possible and necessary to consider that the weapon turned out to be good, since it corresponds to what was originally conceived, and, perhaps, in something even better. Yes, a sample of the times of the end of the first half of the twentieth century was created, but it was done and done relatively well. It remains only to see how this weapon will behave after the start of mass production. 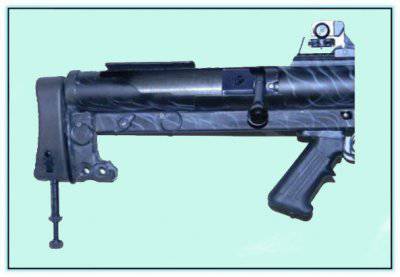 Perhaps, I take the information about this sample of weapons too brightly, but it should be noted that any weapon school, any country, even a potential adversary, with a good pace of development can give impetus to the development of domestic weapons, at least in the form of some ideas and by no means in the form of copying. If we talk about this weapon, then based on the pursued goals, in my opinion, it would be reasonable to make the rifle self-loading, endowing it with greater rate of fire, since accuracy was sacrificed.

Ctrl Enter
Noticed a mistake Highlight text and press. Ctrl + Enter
We are
Dragunov sniper rifleWhat should be a modern sniper (part of 1)
24 comments
Information
Dear reader, to leave comments on the publication, you must to register.