Was Lunex better than Apollo?

November 14 2013
9
The satellite crisis that followed historical the launch of 1957, spawned not only the Apollo, but also the not-so-famous US Air Force program 1958-1961. In many respects, it seems no less attractive, and its ultimate goal - the deployment of a secret underground base of the Air Force on the Moon - looks like a triumph of democracy and philanthropy.


... But did not grow together. Why? And could it be otherwise?

The Lunex project was only formally launched in the 1958 year - in fact, then it became clear only that the US lag in the space race had to do something, so the first year it was all about setting targets for the lunar program. It now seems that the desire to fly first to a particular celestial body was based only on considerations of prestige: the military of that era, on the contrary, it was absolutely clear that any space project could simultaneously be a powerful carrier weapons mass destruction. Remember at least P-36orb, fifteen years standing in service in the USSR.

The US Air Force was expecting something similar, although it did not have any information on this matter, nor the possibility of creating its own funds of this kind. It was the suspicions of the military coloring of a part of the Soviet space program that drove the final version of Lunex, presented a few days after Kennedy’s well-known appeal about the space race made in 1961.

The delivery of a triple 61-ton command and hardware module to the Moon was assumed with the help of a certain launch vehicle with the “original” name of the Space Launch System. Neither the type of engines in the rocket, nor the fuel, nothing at all, except for the number of stages, was not specified by the program: it all just had to be developed (NASA was waiting for the same thing with its Apollo program presented in the same year with approximately the same detail). However, no, there were some abstract wishes: the first degree would be good to make solid-fuel, while the subsequent ones - working on liquid oxygen and hydrogen. It is worth noting that the fuel used by the various steps of the Saturn, which did fly to the Moon, was also not finally chosen in the 1961 year.

To get to the moon, it was supposed to use the "right ascension" method. Simply put, the carrier delivered the module to the satellite. Then for landing the engines were used in the tail section (alternatively, landing on the manufactured chassis). After completing all the necessary research, the ship left the moon and headed towards Earth. The entrance to the atmosphere of the command and hardware module, close to the Dyna Soar project, was carried out at an angle with subsequent damping of speed. The module had a flat bottom, wings with upturned ends and a shape that allows you to manage to plan for landing in the right place. There was no detail concerning the means of rescue of the crew: in 1961, events were whipping up American space efforts with such force that there was simply no time to think and talk about “little things”.

Key in the project - the timing and cost. Of course, unreal. The landing on the moon was promised in six years - by 1967. And the cost of the program is only $ 7,5 billion. Do not laugh: Apollo on 1961 also promised a good leap in six years for $ 7 billion.

Of course, in the form in which these projects existed in the 1961 year, they could not be implemented for either $ 7 or $ 27 billion. Right ascension was considered reasonable, since it did not require maneuvering in the lunar orbit, which then the appearance of methods for calculating such maneuvers were feared like fire. But just the descent to the moon and the ascent from it of a hefty module with astronauts and a returning rocket required much more fuel and a much heavier rocket. To "ascend" from the Earth, it was necessary to send a carrier that was superior to the Saturn-5 in thrust and price, and this is the most powerful rocket in human history.

It is obvious that, faced with real numbers, the US Air Force would have abandoned this direct option in favor of delivering the ship to the moon and landing on it without a returning module to Earth. This is exactly what happened in the 1962 year with the Apollo, when NASA realized that even the super-heavy rocket (of the Nova project) was too weak to "right ascension."

And yet the project has several interesting features. To ensure entry into the atmosphere at a speed close to the second space (11,2 km / s), the returned apparatus entered the atmosphere at a significant angle, “slowing down” without excessive overheating in many respects even in the upper layers. And here is the most important thing: the planning of Lunex did not stop at “sending people to the moon before the Russians”; The ultimate goal of the program was to create an underground (“subsurface”) Air Force base there with personnel at 21, which were periodically replaced. Alas, we are not yet very familiar with the documents of this particular part of the project: it is not entirely clear what exactly they were going to occupy this platoon.

Most likely, the motives of Lunex were close to another concept, which belonged to the US Army and was presented in 1959 year. The Army Project Horizon provided for a "lunar outpost that was necessary for the development and protection of potential US interests on the moon." It is not difficult to guess what these interests are: “Development of the technology of observing the Earth and the cosmos from the Moon ... for the sake of its further research, as well as space exploration and for military operations on the Moon, if they become necessary ...”

Well, well, reconnaissance from the moon, conducting military operations on the satellite, a sublunary secret base ... Anyone who watched "Doctor Strangelove" has no doubt: there were indeed generals in the US Air Force who would hardly lag behind in terms of such plans from army commanders . In the end, the US Air Force, and not the army, offered to shy away with an atomic bomb on the lunar terminator, so that it could be better seen from Earth: to frighten, so to speak, Russian Papuans. From such people, and not that can be expected: for them, the military base in 400 000 km from the enemy is normal. But what good would it be in all this clowning for humanity?

No matter how ridiculous, the sense from Lunex could be very much. Yes, the program did not have two main advantages that Apollo had: the excellent administrator James Webb did not work for it, and its carriers did not design the notorious SS Sturmbannführer. And he, of course, showed himself to be the best rocket designer than any of his other contemporaries in the United States.

However, the whole gift of von Braun largely went into the “whistle”, because his monstrous “Saturns” were ultimately not in demand by the American space industry. Created in the fever of the lunar race, without special attention to the price of the issue, they were too expensive to use outside the context of a ruthless cosmic confrontation. Collapsing flights to the moon in the version of von Braun - Webb was inevitable: each landing there of a ship with people cost more than the largest hydroelectric station ever built by mankind. Or even this: the cost of 700 of such flights would exceed the current US GDP, not to mention the fact that its size in 60 – 70's were much less.

After collapsing, the US space program, however, tried to partially return to the idea of ​​Brown’s rival in Nazi Germany - Eugen Zenger: the ship should be reusable, they decided at NASA. It was this ideology that was penetrated by the later shuttle - like the earlier Dyna Soar.

If Lunex had won in the 1961 year, the development of the lunar ship could take longer than the Apollo project, which was relatively simpler and also created by the von Braun team, and not by local personnel. Of course, politically it was unacceptable: the United States could not lose in the lunar race. But Lunex would be a job for the future, and not for winning the lunar race: having received ships that look like shuttles, one could organically use them for further development.

Finally, the Lunex program offered flights to the moon that which Apollo did not have. Purpose! Yes, yes, that very military base. One may laugh at the American aviators as much as necessary, but such a base would objectively make for the development of the human space presence much more than all the flights to the Moon that were realized. 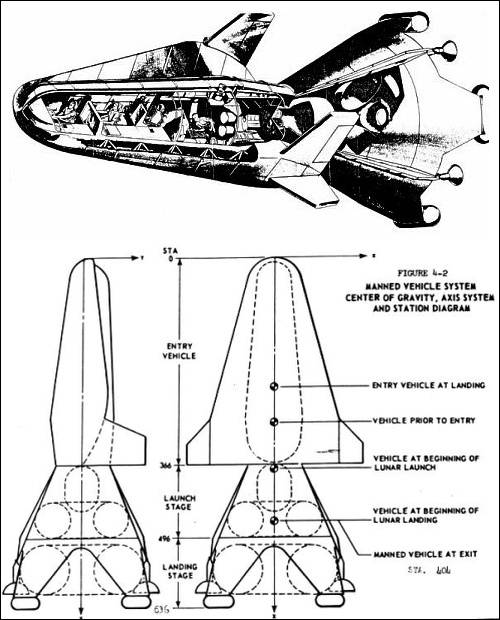 Unlike the single Dyna Soar, Lunex was supposed to be triple, with the astronauts landing one after the other.

We all remember how the Soviet comrades reacted to the appearance of the first information about the shuttles: “This is clearly a weapon, we need the same immediately!” And they did it, and even better (although at the cost of eliminating the more promising Spiral). Let's go back mentally to the end of 60-x - the beginning of 70-x. Did American imperialism have a secret military base on the moon? Soviet would have been there, most likely in the same decade. The solution of the problem of life support of people in such conditions would stimulate a very vigorous development of a number of new technologies.

Needless to say, the world would know about the presence of water in the lunar soil (as well as ice at the poles) much earlier, and the use of lunar materials for construction would clearly have to start in 1970's. Again, it is difficult to imagine the elimination of such a base by any of the parties: both the Soviet and American military would immediately cry out that without it (and if the enemy has a base), “our chances in the upcoming nuclear conflict are insignificant.” And it is absolutely unimportant that it would not have a direct relationship to reality ...

Let us recall one more fact: at that time both the USSR and the USA believed that the nuclear arsenals of the opposite side were much larger than their own. The intensity of hysteria was such that, with a high degree of probability, the bases would have existed until the end of the Cold War. Who knows, perhaps, during this time, it would still be possible to work out reusable systems for delivering goods to the Moon — inexpensive enough that at least the American (or international) base in space would still function.

And in this case, the farthest outpost of manned cosmonautics would be now not in 400 kilometers from Earth, but in 400 000!

Ctrl Enter
Noticed oshЫbku Highlight text and press. Ctrl + Enter
We are
China is getting closer to landing on the moonThe Americans wanted to place a military base on the moon
9 comments
Information
Dear reader, to leave comments on the publication, you must to register.