Indien-Panzer. The "progenitor" of Swiss tanks

November 13 2013
7
Having become an independent state, India immediately began building its own armed forces. After a series of organizational decisions, in the early fifties, the Indian authorities set out to modernize the existing armored forces. At that time in tank parts of India used several types of armored vehicles of British and American production. The tanks built during the Second World War no longer suited the Indian military, which is why it was decided to equip the troops with a new medium tank. 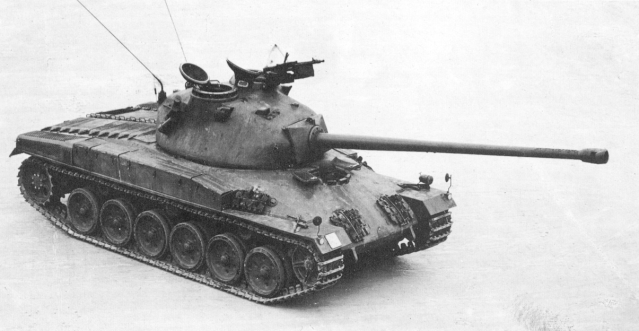 Indian industry at the time could not be called developed and has its own design school. For this reason, an offer appeared to order the creation of a new tank project for foreign tank builders. After comparing the tank industry of several developed countries, the Indian Defense Ministry chose the order implementers. The development of a promising medium tank ordered several companies from Germany and Switzerland. The overall coordination of the project was to be handled by Porsche, the development of the undercarriage was entrusted to Zahnradfabrik AG of Friedrichshafen, and Ruhrstahl had to design and build the turret and armament complex. In addition, the contract for the creation of a new tank meant the construction of mass-produced vehicles in India at the TATA enterprise.

In all three companies selected as creators of the project, engineers and specialists with extensive experience worked: just a few years ago, Porsche and Ruhrstahl were engaged in the development of weapons and military equipment for the Wehrmacht. In addition, after the war, a large number of German specialists emigrated to Switzerland. Thus, the Indian military could get a medium tank, created with a lot of experience gained in the creation of German tanks.

The technical requirements for the project included the creation of a medium tank with a combat mass of about 36-39 tons and an 90 caliber gun. It was assumed that the new tank will have the characteristics of mobility and protection at the level of modern armored vehicles of foreign countries. At the same time, however, it was necessary to simplify the design, since the tank had to be built on Indian enterprises, which at that time did not have a number of new technologies. The technical project created by three companies from Germany and Switzerland received the simple and clear name Indien-Panzer (“Indian tank”). 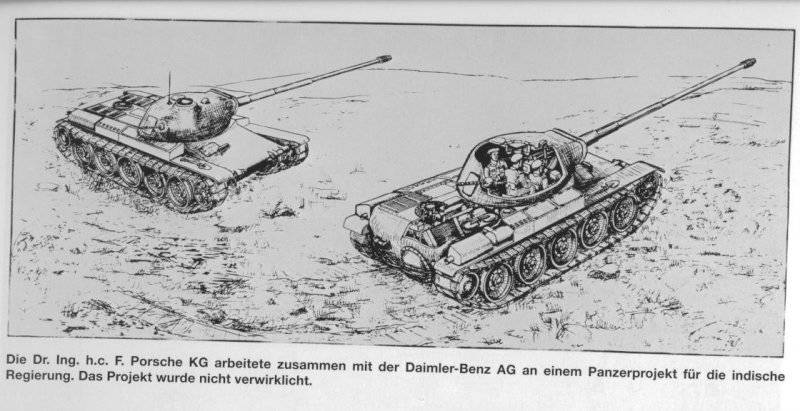 Without losing time on the creation of new technical solutions and taking advantage of existing experience, the German and Swiss designers applied several proven developments in the project. The Indien-Panzer project implied the construction of a medium tank of a classic layout with medium-thickness armor and good weapons for that time. The appearance of the new tank was the reason for the appearance of a version according to which some developments were used in the new project, which appeared during the design of the heavy tank PzKpfw VII Löwe. However, there is no evidence of this.

"Indian tank" was supposed to have a classic layout. In front of the armored corps placed the office of management with the workplace of the driver (shifted to the starboard) and the laying of ammunition. In the middle part of the corps, a tower with weapons and three tank crew positions was located. The engine and transmission was supposed to be installed in the aft engine compartment.

Requirements relating to the combat weight of the tank, affected the booking. The front part of the hull should have a thickness of 90 mm, side and stern sheets - 40 mm. Reservation tower was noticeably thicker. So, in the frontal part of the cast unit should have a thickness of 130 mm. The sides and stern of the turret were supposed to be made almost twice thinner - by 70 mm. Such protection cannot be considered fully modern for the beginning of the fifties, but the technological capabilities of Indian industry and the demands of the military became decisive factors. 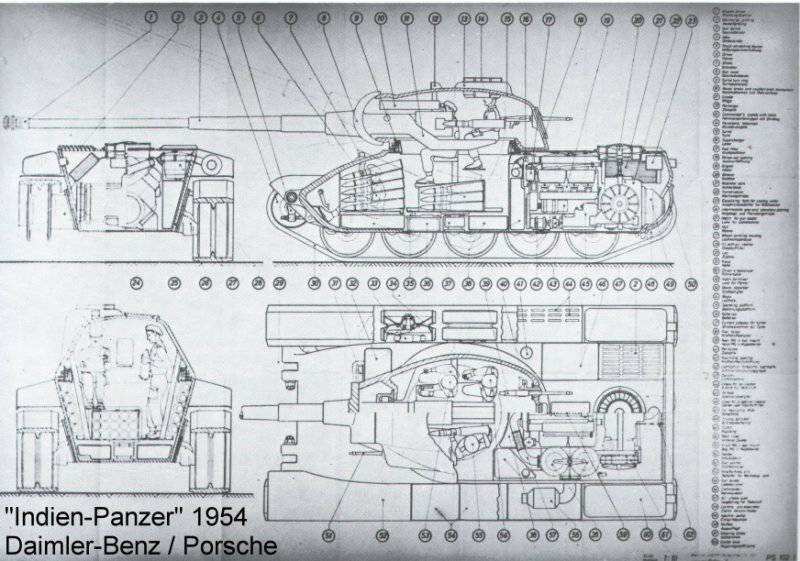 German and Swiss tank builders failed to fully comply with customer requirements regarding the weight of the machine. Indien-Panzer design weight reached 40 tons. Probably, the authors of the project considered such excess of weight insignificant, and the project of the 40-ton tank was presented to the customer. As a power plant, it was proposed to use a Daimler-Benz MB-8A 837 X-cylinder hp diesel engine. Calculations showed that such a motor would allow the combat vehicle to accelerate to the highway to 670 km / h. Data on the power reserve or patency are not available.

As the main armament of the "Indian tank" was supposed to use a rifled gun PzKan 48 90 caliber mm. To the left of the cannon, in the lateral flow of the turret, it was supposed to install a twin rifle caliber machine gun. Another machine gun was supposed to be mounted in the ball in the stern of the tower. In the layouts on the sides and on the polik of the combat compartment, as well as in the front of the hull, up to 40-45 unitary shells could be placed. 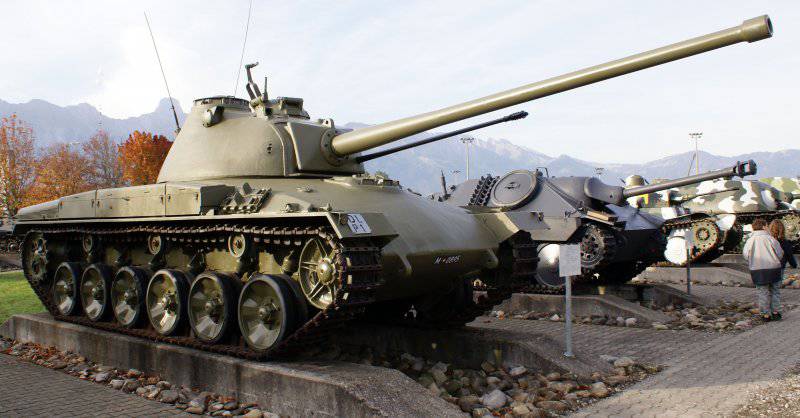 In 1954, the German and Swiss designers, having completed work on the Indien-Panzer project, provided technical documentation to the customer. As far as we know, the finished project has caused several technological claims. So, on the new tank it was proposed to use a large number of cast parts of complex shape, which, apparently, could not be made on the production capacities of India. The same situation with observational devices and sights, which turned out to be too difficult for Indian industry.

The project Indien-Panzer was closed due to the impossibility of the start of mass production in Indian enterprises. However, the project "Indian tank" can not be called useless. A large number of technical solutions created during this project were used later. For example, in 1958, the Swiss specialists assembled an experienced KW 30 tank, which became the basis for the Pz 58 tanks built in a small series. On the basis of the latter was created serial Pz 61. In the design of the KW 30 used some elements created a few years ago for the "Indian tank". Thus, the unsuccessful project of a medium tank for the Indian army can be considered the “ancestor” of its own-designed Swiss tanks.

Ctrl Enter
Noticed oshЫbku Highlight text and press. Ctrl + Enter
We are
Panzer 61 / 68. SwitzerlandArmored vehicles of Germany in the Second World War. Part of 2. The evolution of the organizational forms, the composition of the Wehrmacht Panzervawe and the SS troops
7 comments
Information
Dear reader, to leave comments on the publication, you must to register.