November 11 2013
5
In the late fifties, at the Stalingrad Tractor Plant (in 1961, he and the city received a new name), several projects for the modernization of the floating tank PT-76. It was supposed to improve the power plant and armament of the tank, as well as update the composition of the equipment, which could significantly increase combat capabilities. In 1960, the project "Object 906" was launched, in which it was planned to apply several new technical solutions. To study the prospects of a particular idea, it was proposed to develop, build and test a special experimental tank. An experienced combat vehicle received the designation "Object M906." 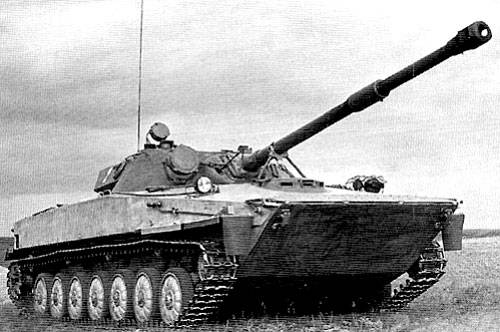 One of the main objectives of the “Object M906” project was to study the possibility of manufacturing an aluminum alloy armored hull. In this regard, the body of the experimental machine was assembled from parts made of alloys D-20 and AL-19. In terms of its shape and layout, the hull of the new tank almost completely repeated the hull of the serial PT-76. There were slight differences: for example, the roof of the engine and transmission compartment consisted of two plates arranged by a ledge. The forehead of the hull was assembled from 20 (upper and lower) and 30 (medium) mm thick sheets. The lower part of the hull sides had a thickness of 25 mm, and the top 30 and 20 mm. The front bevelled and middle parts of the upper part of the sides were made of thicker sheets. The aft parts had a thickness from 12 to 20 mm, the roof - 12 mm. Frontal parts provided protection against armor-piercing bullets of caliber 14,5 mm, the rest - against armor-piercing bullets of rifle caliber.

It should be noted that the aluminum case had a lower stiffness compared to steel. Because of this, in several places the bottom and roof provided stiffening ribs. In addition, the leaf sheet transferred the weight of the tower to the bottom of the hull through special supports. Despite the noticeable complexity of the design and the increase in the number of parts, it was possible to significantly reduce the weight of the case. The hull structure of the PT-76 tanks and the “M906 Object” was almost the same, but the armor of the second vehicle was lighter on the 1800 kg. In addition, the used aluminum alloys, in contrast to armor steel, were not so susceptible to corrosion under the action of sea water.

A number of steel parts were present in the design of the armored hull of the experimental machine. Steel made several power elements of the body, the driver's hatch and the tower. The latter was taken from the serial tank PT-76, because of which aluminum alloys were not used in its design.

The layout of the "Object M906" case was no different from the placement of units on PT-76. In front of the hull placed the office of management with the workplace of the driver. Behind him installed the tower, entirely borrowed from the serial amphibious tank. In the stern of the hull there was an engine compartment. In the course of the project “Object М906”, not only the aluminum hull was tested, but also a new transmission system created for the floating tank “Object 906”. New transmission, coupled with a diesel engine 8Д6-300М power 300 hp allowed to bring the maximum speed of the experimental tank on the highway to 70 km / h and on the water (using two water cannons) to 10 km / h.

The “M906 object” also became a stand for testing control, running gear, electrical equipment, etc. systems of the future amphibious tank "Object 906". There was no need to develop some new components and assemblies, therefore both new tanks, experimental and supposed to replace the existing technology, made it possible to take from PT-76 an electrically-reflective shield with a drive, a steel hatch of the driver's hatch several other parts. 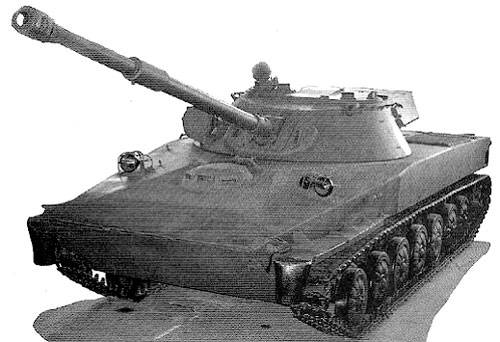 The only prototype experimental tank "Object M906" was built in the first months of the year 1961. Soon after the end of the assembly, the tests began. During trips around the landfill and test firing, the “M906 Object” showed all the positive features of aluminum armor. Disproving all doubts, aluminum alloys provided a sufficient level of protection. Moreover, the frontal details of the experimental tank were protected by the crew and units from bullets of caliber 14,5 mm, which exceeded the capabilities of the serial armor PT-76. The level of protection of both side tanks was the same. It was also noted that the aluminum armor case provides better protection against shock waves and shrapnel.

Although the project “Object М906” was initially considered as a way to test promising technical solutions in practice, it gave some useful results. First of all, the experimental amphibious tank allowed us to test and bring some units of the future machine "Object 906". However, the most valuable result of the “Object M906” project is the verification of aluminum armor and the development of its manufacturing techniques. In the manufacture of the only prototype of the “M906 Object”, the specialists of the Stalingrad Tractor Plant have developed casting and machining technologies used so far.

New technologies for the manufacture and processing of aluminum reservation parts can be considered the main result of the “M906 Object” project. The fact is that this amphibious tank was created as a platform for testing the technologies and components of the promising combat vehicle "Object 906". In 1961 and 1962, six amphibious tanks “Object 906” passed tests, but this machine did not enter service. The combination of the characteristics of the new amphibious tank did not provide a significant superiority over the PT-76, because of which the project "Object 906" was closed after the tests. Thus, from two projects only technologies related to aluminum armor have come to practical use.