November 6 2013
38
The Brazilian Defense Ministry at the end of October 2013 decided to adopt a new machine gun under the designation IA-2, which was created by IMBEL (Industria de Materiel Belico do Brasil), according to the Brazilian portal Forcas Terrestres. The decision to adopt a new assault rifle for the Brazilian army was taken during a special meeting of the General Staff of the Armed Forces of Brazil, which took place on October 18 of the year 2013.


The development of this machine has been conducted in Brazil since the beginning of the 2000-s. It was created as a replacement for the FN FAL lightweight automatic rifle, as well as the HK33 and M16A2 assault rifles. Brazilian designers created a machine for the parallel use of two different patrons: NATO 7,62x51 and NATO 5,56x45. The 7,62 caliber is also used in the sniper rifle version. The effective firing range, depending on the caliber used, is 600-900 meters, and the maximum firing range is up to 3600 meters. Weapon has a pistol grip, plastic forearm and butt. Picatinny rail strips can be installed on the machine, which are used to install various attachments, including laser designators, sights, tactical lights, etc. 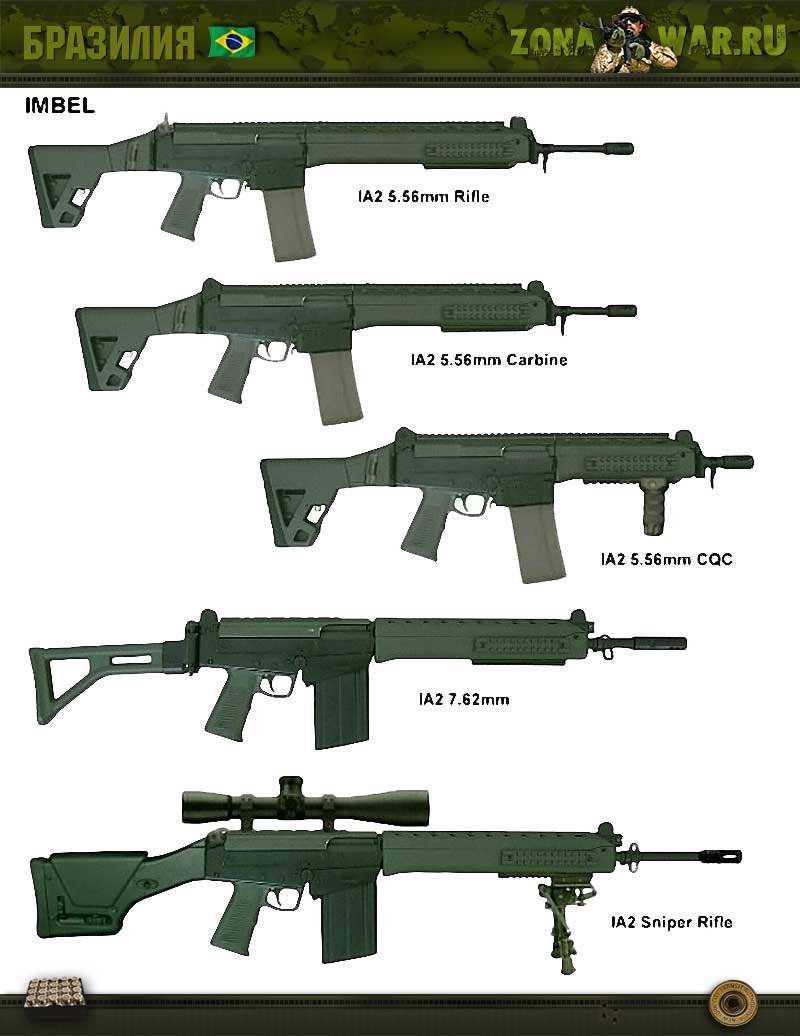 Based on IMBEL IA-2, a whole family of small arms types was created, including a 7,62-mm sniper rifle, as well as millimeter 5,56 and 7,62 mm rifles and a special shortened version of the CQC assault rifle for using the 5,56-mm cartridge. Despite the fact that the order to accept the new machine into the armament of the Brazilian army was signed only in October 2013, the weapon has been actively supplied to the troops and the Brazilian security forces since the end of last year. All were released more than 1500 copies of the weapon.

The new Brazilian assault rifle was created on the basis of the Belgian model FN FAL. The main difference between these two models of small arms is that the Brazilian machine gun uses a butterfly valve as opposed to the inclined gate, which is used on the original Belgian rifle FN FAL. At the same time in the IMBEL IA-2 you can still see the Belgian roots.

The FN FAL light automatic rifle (from the French Fusil Automatique Leger) is a NATO rifle produced by the Belgian company Fabrique Nationale de Herstal. The FN FAL is one of the most common and internationally recognized automatic rifles. Initially, FN FAL was created under the intermediate cartridge caliber 7,92 × 33 mm, which was widely used by the Germans during World War II, later prototypes of the rifle under the .280 British cartridge appeared. Still later, FN FAL was converted to use the standard NATO cartridge 7,62 × 51 mm, which was adopted as a single for all countries of the North Atlantic alliance. During the Cold War, these weapons acquired the very interesting nickname "the right hand of the free world." 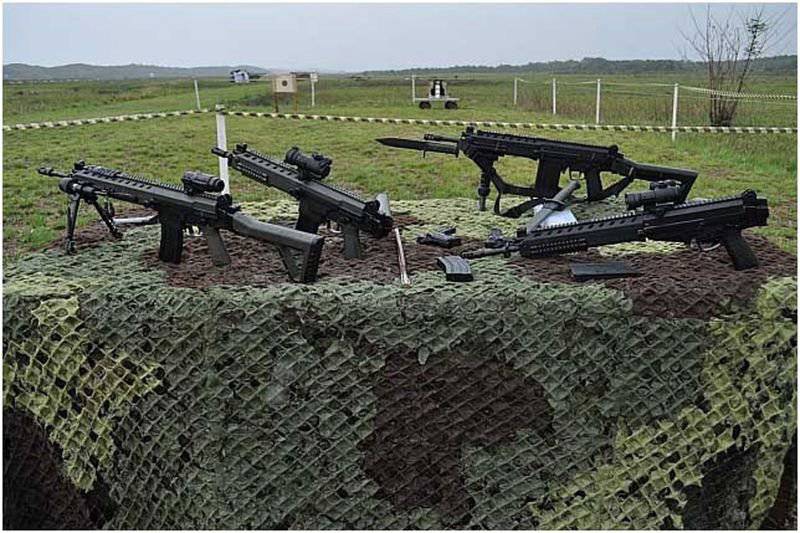 Initially, the FN FAL rifle was designed as a small arms for active combat in the middle distance. As a result of the replacement of the intermediate cartridge 7,92 × 33 mm with standard NATO ammunition, an increase in the muzzle energy of the bullet occurred, a direct result of which was an increase in the range of the rifle. As a result, the Belgian gunsmiths came up with a model that is able to be used effectively enough at a distance of up to 1000 meters when firing single shots and provide the shooter with satisfactory accuracy of fire when firing in short bursts at a distance of up to 200 meters. This sample of small arms was created to arm the infantry units, so the FN FAL is easy to maintain.

The FN FAL rifle was actively used in many armed conflicts of the second half of the 20th century. The automatic rifle was the main weapon of the Israeli army during the Six Day War and the Doomsday War. It was also widely used during the Falkland War (both sides of the conflict used the rifle). Australians and Canadians used a rifle in the Vietnam War, it was also used in numerous armed conflicts in Africa, as well as local clashes with illegal armed groups in the countries of Southeast Asia and South America.

Some later modifications of the FN FAL are still in service with various security agencies (where allowed by local laws), as well as police units. It is widely used throughout the world. In various versions, this automatic rifle was in service with the 55 armies of the world, including the Brazilian army.

FN FAL
Like any other weapon, FN FAL has its advantages and disadvantages, which directly follow from the design of the weapon. To some extent, they will inherit and the new Brazilian machine IMBEL IA-2.

Advantages
Quite high accuracy of shooting at a distance of up to 1000 meters when firing single shots.
High striking, penetrating and destructive ability of the used NATO cartridge 7,62 × 51 mm.
Simplicity of incomplete disassembly of the model, the possibility of maintenance without the use of special tools.
A heavy and relatively stable bullet along with a powerful cartridge allows you to effectively fight in dense vegetation and rough terrain, without fear of bullet deflection as a result of collision with small vegetation branches or foliage, and also ensures effective defeat for soldiers protected by body armor.

Disadvantages
Very low accuracy of fire when firing bursts, even in the version of the manual machine gun, characterized by the presence of bipods and weighted barrel.
Fairly low resistance to clogging weapons with sand, small debris and dusting.
The large weight of the ammunition and, as a result, the restriction imposed on the ammunition carried by the soldier.
Removal of powder gases near the front sight, which can create additional difficulties for the shooter when aiming while conducting intense fire.

In general, it can be noted that the FN FAL light automatic rifle over the years of its operation has shown itself to be a fairly reliable and unpretentious sample of small arms. In fact, it is not an assault rifle, but an automatic rifle. Despite the fact that in this tactical niche today, a sufficient number of new types of small arms have appeared, FN FAL does not lose ground, remaining a proven time and a fairly effective weapon.

Ctrl Enter
Noticed oshЫbku Highlight text and press. Ctrl + Enter
We are
FN FAL automatic rifle: "The right hand of the free world"Experimental and prototype weapons of Izhevsk Machine-Building Plant (assault rifles and rifles)
38 comments
Information
Dear reader, to leave comments on the publication, you must to register.