Russian air force will increase its presence in three directions

November 6 2013
36
In the last few weeks a number Newsrelating to the further development of the air force. The Russian military department intends to strengthen air force bases in several directions, as well as to continue the development of air bases located outside the country. According to the media, all such intentions of the Ministry of Defense will be carried out in accordance with the amended National Defense Plan. 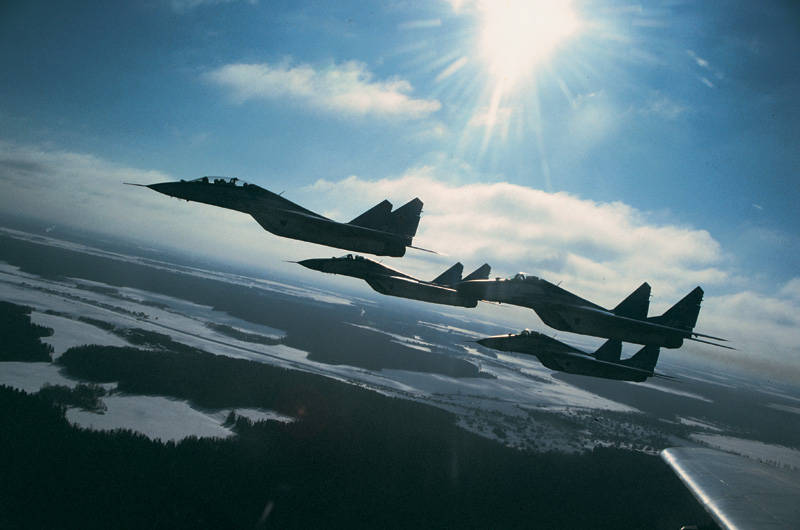 According to Nezavisimaya Gazeta, the military department has completed work on changing the Defense Plan and is ready to present its updated version to the country's leadership. According to a source in the Ministry of Defense, Russian President V. Putin will sign a new plan in the near future. Changes in the documents concerning the country's defense capability are due to a number of the latest decisions. Updated Defense Plan involves creating or strengthening aviation bases in the western, northern and Central Asian directions. Some work within the existing plans has already begun.

Not so long ago, it became known that Moscow and Minsk are preparing to sign an agreement, in accordance with which a Russian fighter aviation regiment will be located at the airfield of the city of Lida. The document is not yet ready, since the parties are discussing its last nuances, but already now Belarusian specialists have begun preparations for fulfilling their obligations. According to the latest statements by the military leaders of the two countries, the first fighters of the Russian Air Force will go to serve a new base until the end of 2013.

It should be noted that the strengthening of the air forces of Russia in the western direction is carried out as part of the creation of a unified air defense system. A few years ago, the Russian Federation and the Republic of Belarus signed relevant agreements and are now continuing to build a common air defense system. In particular, in the foreseeable future, the Russian military should help their Belarusian colleagues with equipment. Belarus’s air defense will receive four C-300 anti-aircraft missile systems free of charge, which will affect the defense potential of the whole country accordingly.

One of the air bases, whose task will be to cover the northern frontiers of the country, will be the reconstructed Temp airfield on Kotelny Island (the Novosibirsk Islands archipelago). Now military builders are working on the reconstruction of the basic infrastructure of the airfield. By the end of October, the formation of the aviation commandant's office was completed. In addition, October 29 for the first time after the 30-year recess, a military transport aircraft landed at the Temp airport. An-72 delivered to the airfield a group of specialists who will continue work on the reconstruction of the runway and auxiliary facilities.

The main objective of the reconstruction of the airfield "Temp", as stated in early autumn, is to resume air traffic in the Arctic in general and in the Northern Sea Route in particular. In the future, it is planned to improve the runway. As Deputy Minister of Defense General of the Army A. Bakhin said, in the foreseeable future it is planned to lengthen the runway, which will allow heavy transport aircraft such as Il-76 or An-22 to take off and land on it.

At the end of October, celebrations took place dedicated to the tenth anniversary of the Russian Kant air base. In honor of the anniversary, the participants of the events planted a birch alley of Russian-Kyrgyz friendship, and also opened a commemorative stele. In addition, at the festival, Russian military leaders announced their plans for the future of the air base in Kyrgyzstan. The commander of the 2 troops of the Central Military District Air Force and Air Defense Command Lieutenant General V. Sevostyanov stated that the Ministry of Defense intends to double the number of aircraft on the Kant base. In addition, the runway and taxiways will be renovated in the near future.

On the basis of "Kant" constantly deployed compounds using attack aircraft Su-25 and multi-purpose helicopters Mi-8. In addition, not so long ago several strategic Tu-95MS missile carriers flew to the airfield in Kyrgyzstan. The redeployment of these aircraft is associated with exercises and is temporary. It is not yet known whether Kant will become a permanent base for strategic aviation.

The Russian Ministry of Defense has not yet announced the details of its plans regarding the exact composition of the air units of the new and updated bases. It is known that a fighter regiment will be located at the Belarusian aerodrome of the city of Lida, however, such information about the airfield "Temp" or strengthening the base "Kant" is not yet available. In this regard, you can make a variety of assumptions. Thus, the statement of General Bakhin on the future of the aerodrome in the Arctic or information regarding the repair of the runway at the Kant base suggests that these aerodromes in the future will ensure the operation of not only light and medium aircraft. It is more fully possible that in the foreseeable future the updated bases will be able to become airfields for strategic aviation.

Already, we can say that fighter units will necessarily serve at the air bases being reinforced. The fact is that Russia has already signed an agreement on the creation of a unified air defense system with Belarus and Kazakhstan, and similar agreements with other CIS countries may appear in the near future. The result of these agreements should be a unified air defense system that protects the airspace of the entire Commonwealth of Independent States. Its structure will include both anti-aircraft missile units and fighter aircraft.

The increase in the number of airfields used, as well as the expansion of the territories that can be controlled from them, requires corresponding changes in the governing documents. In this regard, according to the press, the National Defense Plan was amended to take into account the combat work of military aviation on the created and updated air bases.

Ctrl Enter
Noticed oshЫbku Highlight text and press. Ctrl + Enter
We are
From the history of own names of aircraft of Russia, 1918 - the end of 1920An-12 in Afghanistan
36 comments
Information
Dear reader, to leave comments on the publication, you must to register.