November 5 2013
4
T92 - one of the most powerful self-propelled artillery mounts mid-XX century. Developed in the USA at the end of the Second World War. Serially, this 240-mm ACS has never been produced, the 5 prototypes of this machine were manufactured in total. Today, this artillery installation is familiar to many who at least played a little World of Tanks. And although in reality she was unable to take part in the hostilities, everyone can see the power of this ACS on the fields of virtual battles. In general, the Belarusian online game, as if it were not related, did a very important thing - it popularized armored vehicles of the Second World War, aroused people's interest not only in various designs of engineers from the USSR, Germany, USA, France, Great Britain, but also stories of that period.


After the adoption of the heavy T1945E26 tank, better known as the M-3 Pershing, in early 26, discussions began in the United States on proposals to create a whole series of armored vehicles based on unified chassis, complete sets of units and components of this tank. The 240-mm towed howitzer M1918, which is in the arsenal of the American army, was recognized by the military as not particularly successful, due to difficulties in moving such a massive howitzer around the terrain, and the US experience in installing 155-mm cannons on the chassis of the M3 / M4 series tanks clearly demonstrated that on the basis of the T26EZ heavy tank it will be possible to create a 240-mm self-propelled guns. Also, the chassis of this tank was supposed to be used to install an 8-inch (203 mm) gun on it. At the same time, the model with the 240-mm howitzer received the T92 index, and with the 8-inch T93 gun. Also in the plans of American engineers was the creation of the T26E5 assault tank, transporters and a number of other vehicles. The design of the T92 was approved in March 1945, after which the Chrysler company (Detroit Arsenal) received an order for the production of 4 prototypes, a total of 5 self-propelled guns T92 were built. 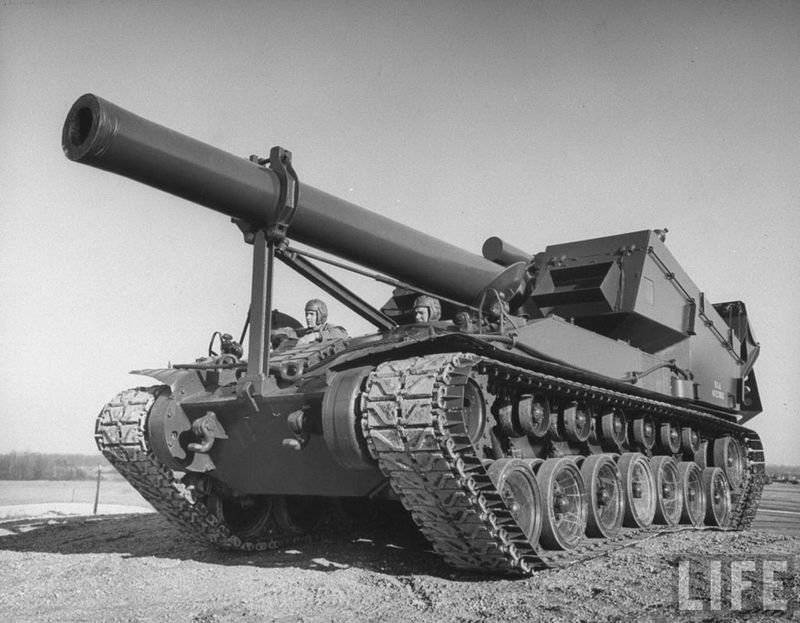 The first self-propelled howitzer was ready at the beginning of July 1945, after conducting a series of tests that took place at the Aberdeen range, the ACS was sent to Fort Bragg for testing by the Artillery Committee. At the same time, the military placed an order for T93. Two of the first four T93 prototype machines were handed over to the military by September 1945. At this point, all military orders were suspended due to the end of the war with Japan. In total by this moment the Detroit arsenal fully assembled 5 ACS Т92 and another 2 ACS Т93. Tests conducted in the United States demonstrated that these two heavy SAUs would be ideal weapons for the destruction of deep shelters and bunkers of the enemy in the conduct of hostilities in the Pacific Islands.

ACS Т92 and Т93 were primarily created for use in the upcoming landing on the Japanese islands (as part of Operation Downfall), where a very high saturation of the Japanese defense with various reinforced concrete structures was assumed. The decision to launch the ACS data into mass production was made in March 1945. In total, it was planned to collect 115 ACS Т92 and 58 Т93, but before the end of the Second World War the serial production of ACS data was not deployed.

For testing at the famous Aberdeen Proving Ground, the first sample of the T92 arrived only in July, and the T93 in September 1945 of the year. Due to differences in the weight of the artillery systems used, the combat mass of the T93 was even higher and amounted to 66 300 kg., Which, however, had a slight effect on the technical characteristics of the SAU. Both prototypes passed a series of tests successfully, and the SAU was just late for the front. After the end of the war, interest in this project was greatly weakened, besides, the American army had enough of no less successful self-propelled guns of the type M40 and M41 already in service. At the same time, almost all collected samples were sent to the smelter with the exception of a single copy of the T92, which was turned into a museum exhibit of the Detroit arsenal. 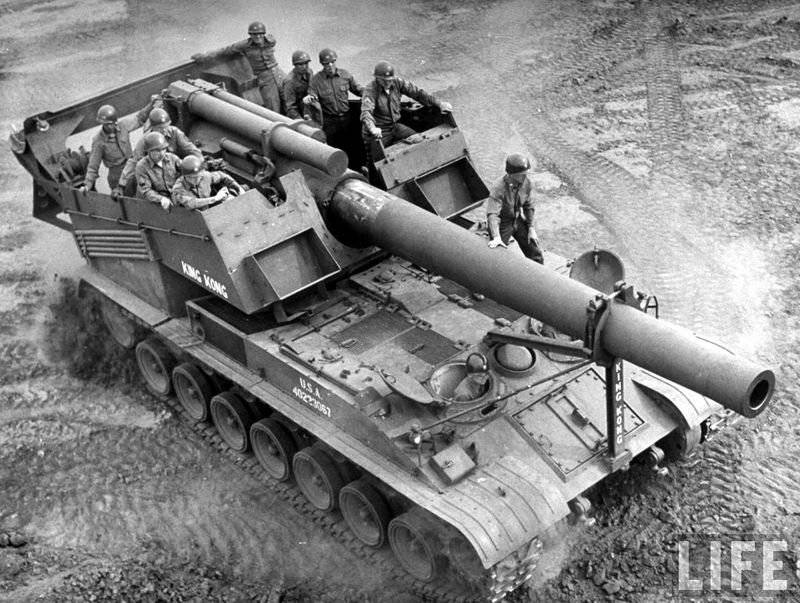 Both self-propelled artillery mounts used a large number of units and components of the T26E3 tank, the same engine, transmission and suspension. At the same time, unlike the heavy tank, the drive wheels on the ACS were located at the front rather than at the rear. Both self-propelled guns had the same lightweight chassis, which was rearranged, the opener was installed in the stern. Armament SAU T92 and T93 was interchangeable. In developing these artillery systems, American engineers relied on the experience gained in developing the T84 ACS. The large dimensions of the mounted guns made it necessary to add an 1 th track roller from each side and lengthen the hull compared to the T26E3 tank. Thus, on each side accounted for 7 track rollers with individual torsion bar suspension, as well as 6 supporting rollers. The front wheel was driving, rear guides.

Also, the designers managed to ease the design by loosening the level of body armor, the thickest booking of ACS did not exceed 1 inches (2,54 cm). Both ACSs received the T80E1 two-ridge caterpillar, which was quite often expanded by the crew using the 5-inch spurs. The caterpillar was assembled from metal tracks 94 with 609 mm width. and in increments of 152,4 mm., the tracks were equipped with special rubber-metal hinges. The installation of extended tracks reduced the pressure on the ground, which had a positive effect on the maneuverability and mobility of the machine.

As on the T26E3 heavy tank, the new SAU had a driver directly on the 2. By car there were a driver and his assistant, each of which had its own control mechanisms. Each of the drivers had their own turret with 3 viewing blocks installed in it. These turrets were located on the front sheet of the hull, which had a slope in 72 degrees from the vertical. The full artillery crew included an 8 man. In addition to the 2 drivers, the crew also included 6 people who were located on the sides of the gun in the rear of the ACS. At the same time, neither T92 nor T93 was supposed to transport ammunition. Planned that the installation will be accompanied by special transporters T31, which were adapted for the transport of 240-mm and 203-mm ammunition. Specifically for these SAU data, American engineers developed concrete-shot shots. 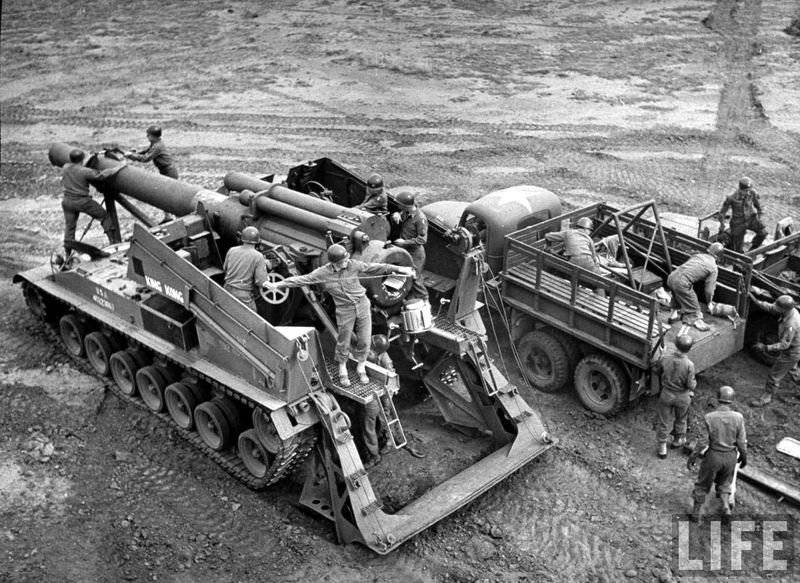 Tests that were conducted at the Aberdeen military range, demonstrated that the data of the SAU are ideal for the destruction of long-term firing points and all kinds of enemy bunkers. In this case, there were noted and disadvantages of the machine. In particular, the need was identified for installing a more powerful engine on the machine. Therefore, it was decided that the development of new SAUs should be based on the components of the propulsion system of a series of new heavy tanks Т29, Т30 and Т32, which in turn at that time were only at the testing stage. The relative drawback of the system could be considered a small portable ammunition, which consisted of only 6 shells.

The design of the two SAU T92 and T93 was in many respects similar, except for the used artillery systems. The SAU building had a layout with a front-mounted transmission, and a control compartment was also located in the front. The engine compartment was in the middle of the self-propelled gun, and in the stern - the combat compartment. The hydraulic transmission was borrowed from the heavy Pershing tank and included the following design elements: 3-speed torque converter, 3-speed planetary gearbox with servo-hydraulic control, primary planetary gearbox, Cletrack double differential, as well as single-speed side gears. The SAU powerplant consisted of a Ford GAF ​​8 gasoline engine that developed maximum power in the 500 hp. at 2600 rpm

The gun was mounted in the hull aft in a special U-shaped superstructure with anti-bullet armor (12,7 mm armor). The 240 howitzer fire rate was an 1 shot in 3 minutes. The fire was carried out mainly with the use of high-explosive fragmentation projectiles, which had a maximum range of up to 23 065 meters. For 203-mm guns, this figure was larger and was 32 584 meters. Also could use a special concrete shell. To reduce the recoil level at the time of the shot, a bucket stop was mounted on the stern broneliste, which fell to the ground in a combat position. 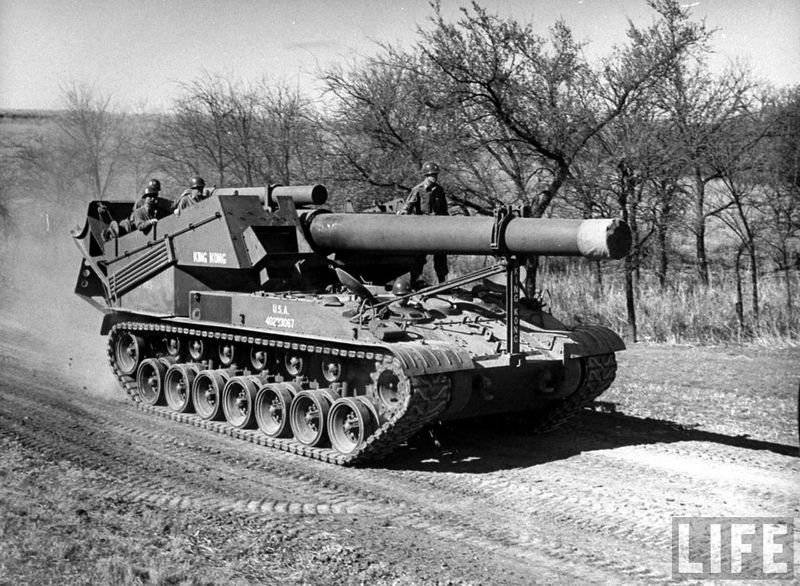 As mentioned above, the crew of the ACS T92 consisted of 8 people: the driver, assistant driver, commander, gunner and 4-x loaders. In the office of self-propelled controls were located the driver and his assistant, the rest of the crew housed in the fighting compartment. To protect against possible attacks by enemy infantry in the conning tower, special 7,62-mm rifles were available in a special piling.