November 1 2013
62
The Soviet medium tank was put into service in the 1966 year. This combat vehicle, weighing only 36 tons, in terms of protection characteristics, firepower matched or even surpassed the machines of the heavier class. 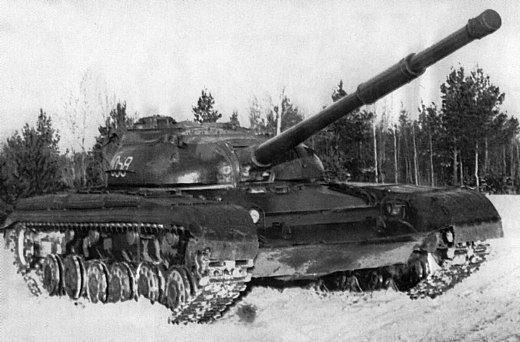 The original loader 115-mm gun allowed up to three people to reduce the size of the crew and ensure the rate of fire to 10 minute shots. The compact 700-strong engine accelerates the tank to 65-70 km / h.

Possessed this tank and other innovations, because of which from the very beginning of its existence in the troops it was enveloped in a dense shroud of secrecy. In 1967, more than 200 T-64s took part in the Dnepr large-scale maneuvers, which were dedicated to the 50th anniversary of the October Revolution. Participation of new tanks went unnoticed by Western intelligence. T-64s simply got lost in a tank armada of T-10, T-54, T-55 and T-62. They were not in the combat drill near Kiev, where they drove thousands of tank armada, which stood in dense armored rows, which is called from horizon to horizon.

The next large-scale action was the "Dvina" combined-arms maneuvers, which were held in March 1970, just before the Lenin 100-year anniversary.

The field of training battle was Belarus, where the divisions of the Moscow, Leningrad, Baltic and North-Caucasian military districts were deployed.

T-64 tanks were also involved in these "battles". These maneuvers were covered by representatives of many Soviet media. They, apparently, and managed to "light up" these combat vehicles. As a result, about a year later, the first images of tanks, which were already in service with the whole five-year plan, turned out to be in the West through some channels. 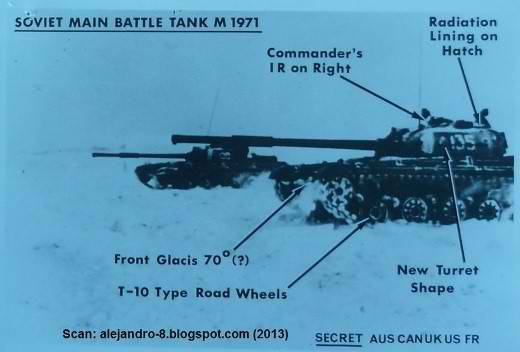 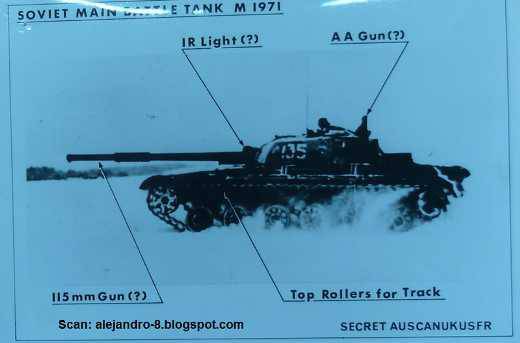 These spy photos are posted on alejandro-8.blogspot.ru. There are also analytical materials from the British intelligence about the T-64. Of course, intelligence analysts did not know the name of this tank, so they assigned it the designation M-1971 by the year they received the photos. They estimated the weight of the tank in 39-40 tons. In reality, as reported above, its combat mass was no more than 36,7 tons. The caliber of the gun in the 115-mm was correctly evaluated. But wrong with the crew. It was considered that the 4 man is still in the tank. Experts had no idea that there was a mechanized charging system, which is not surprising. In order to see this innovation in the photo, one would need to have X-ray vision.

Foreign experts drew attention to the fact that the commander's turret is located on the right side of the tower, to the possible presence of radiation protection of the crew hatches. Another undercarriage with rollers of smaller diameter struck them. What is curious, not only the British, but also other NATO specialists seriously believed that the M-1971 used elements of the undercarriage of the Soviet heavy tank T-10. Although it is actually not the case.

It can be assumed that NATO members noted with great satisfaction for themselves that the laser range finder was not used on the tank. Here the USSR was really some lag.

Not right, the British estimated the size of the car, for example, the height of the tank was determined by them in the 2,5 meter, in fact, the T-64 was very low for its class tank, only 2,1 m.

More detailed information on the T-64, however, in modification “A”, was obtained by NATO members when these tanks appeared in service with the formations of the Group of Soviet Forces in Germany.

And if NATO members more or less knew their potential opponents, then Soviet citizens for the first time officially learned about the existence of the T-64 tanks only in the 1986 year. And the same T-64А was declassified only in 1988.

Ctrl Enter
Noticed oshЫbku Highlight text and press. Ctrl + Enter
We are
Do I need in the modern tank automatic loading?Armored vehicles of Ukraine: results, potential, prospects ...
62 comments
Information
Dear reader, to leave comments on the publication, you must to register.