November 2 2013
18
A separate and very important issue is the presence of capsule revolvers in the Russian army during the Crimean War and their production in Russia. It is known that even before the bankruptcy of the first weapons enterprise of Colt in 1842, a group of Russian naval officers visited its factory in Peterson, New Jersey. So the first official acquaintance of Russians with Colt products took place. In Russia, these new products were noticed immediately, and after a while they were launched in the Empire. In this area, the famous gunsmiths of the Goltyakov, Pastukhovs, Zizhin distinguished themselves. They were not just copying the American design in the forehead, but introduced a number of innovations into it, aimed at improving the usability of the revolver. Subsequently, the release of revolvers was adjusted not only in Tula and Izhevsk, but even in Helsingfors (modern Helsinki, while Finland was part of the Russian Empire). By 1854, small-scale production of “American rivolver pistols” (namely rivolvers pistols, in the mid-19th century transcription of documents) was set up in domestic factories: “saddle pistol” or №1, “belt gun” or №2, “pocket a pistol with a 6-inch barrel, five-shooter, or No. XXUMX. ("Dragoon", "Nevi", "Pocket" according to the American classification). 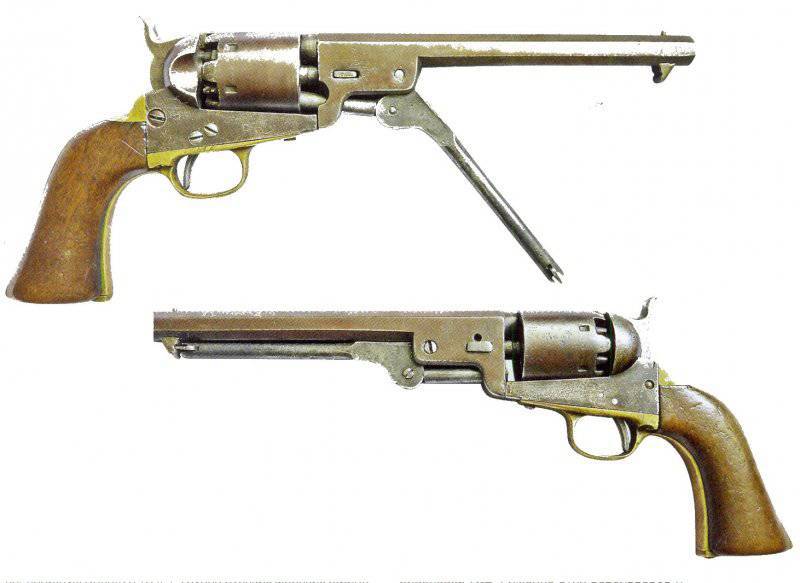 In 1854, "belt-guns-revolvers" No. 2 began to be introduced in the naval department, 400 (according to other sources 300) revolvers were made in Tula for the guards naval crew, it is also known that the same revolvers were taken for officers of the Infantry Regiment of the Imperial Family, but there is no exact data on their release. Officially, S. Colt's revolvers were also adopted by the escort teams (these units were intended to escort prisoners, suppress riots in places of detention and external guard of prisons). Officers of other military branches could buy the Colts themselves at their own expense.

Based on this data, we can say that at the beginning of the 1850-ies. Colt's revolvers were not just widely known and popular in Russia and not just produced in the Empire, but were far from being in unit quantities among the troops. Thus, during the Crimean War, they were used not only in the armies of our enemies, but also in the Russian. 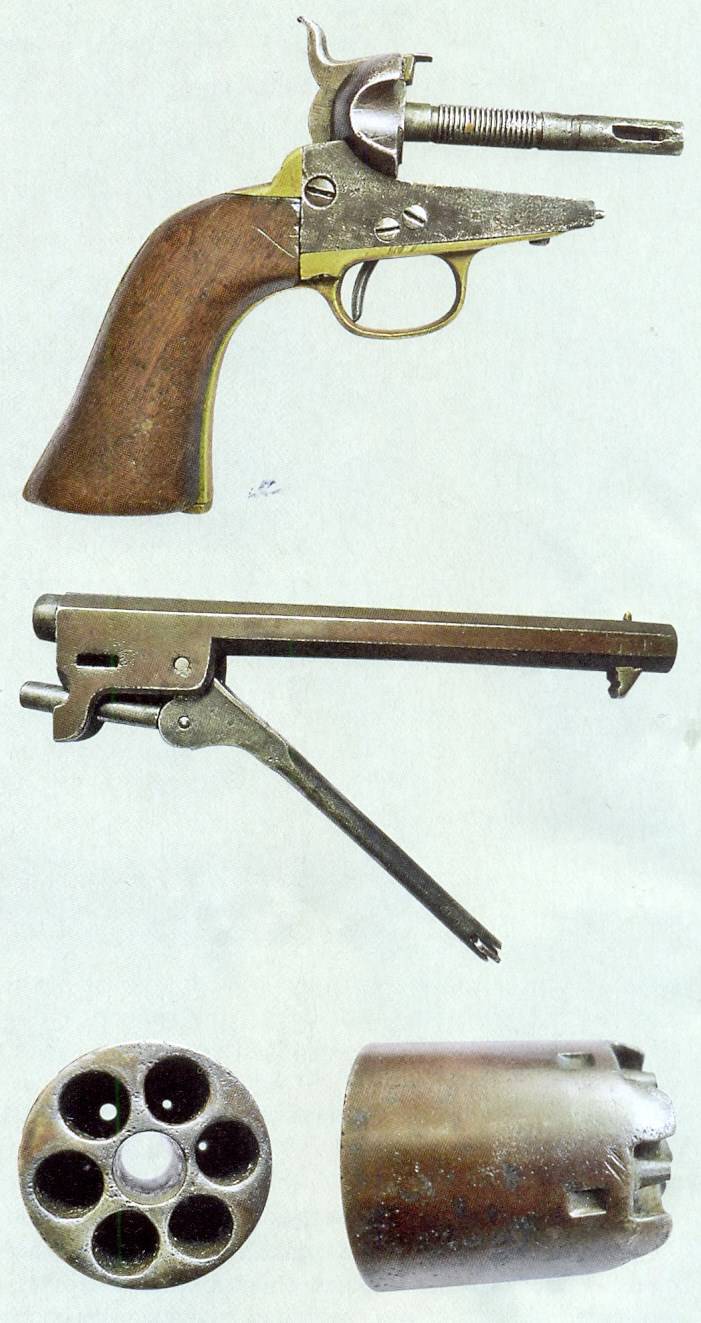 Colt's revolvers, manufactured at the same Koltovsky enterprises in the United States and England, in sources in the XIX century. directly referred to as "patented", and they were sold along with the imitations of other foreign factories and produced in Russia.

On October 30, 1854, Nicholas I met in the Winter Palace with S. Colt and his secretary E. Dickerson, their conversation lasted 1 h 15 min. Colt presented the emperor with three luxuriously finished serial models - dragoon, naval and pocket. The piquancy of the situation was given by the fact that Colt came to St. Petersburg from England, where there was one of his factories, and the British troops at that time were fighting against Russia. The Russian army was in dire need of weapons. And of course, the interests of the Empire and Colt intersected, and Colt could offer not only revolvers, but also revolving rifles. In addition to the indicated persons, the meeting was attended by the chief of the gendarmes A. F. Orlov and the Minister of Foreign Affairs, Chancellor K. Nesselrode. What was discussed during this meeting remains a mystery to modern historians. Most likely, the issues of arms supplies to the Russian Empire were discussed there, bypassing the embargo that was in force during the war.

Describing the production of revolvers in Russia, the famous Russian weapons systems specialist A.P. Gorlov singled out a number of their differences from American prototypes. “The curvature of the tracks (meaning the organization of rifling) in our rivolvers of the system of Mr. Colt is made equal along the entire length of the barrel bore, whereas in rivolvers of the product of Mr. Colt (patented) this curvature increases gradually as the barrel approaches. The change is made in our rivolvers so that it is convenient to clean the tracks from rust with a lead scraper. The curvature of the rifling of our rivolvers №2 is 1 / 8 turnover along the length of the trunk. "

В1854, at the Tula Arms Plant and at the very beginning of 1855, at Sestrorets Arms Plant, revolvers manufactured in the Empire were tested. They showed satisfactory accuracy on the 120 and 150 steps, bullets in the last distance easily pierced the 1,5 and even the two-inch (38,1 mm and 50,8 mm) pine boards.

After testing in 1850-s. Colt's revolvers were recognized as particularly useful "in the land service for people who have to act separately, or in small units against an unexpected attack, for example, in small and partisan wars, when serving on outposts, when escorting transports, during reconnaissance and, finally, in the war against the wild tribes. " In the fleet, such revolvers were considered useful in boarding and hand-to-hand fighting on the decks of ships, where there are many tackles and other objects that impede the use of cold weapons. The release of revolvers in Russia, of course, was not particularly large, but orders received from the state could be executed not only by state-owned factories, but also by private arms enterprises. They supplied these models to the commercial market. And their cost was significantly lower than the American one. Despite the ongoing war, the "Colts" in the Empire were produced and entered into service. And, judging by the peculiarities of the relationship with S. Colt, he was interested in Russia only from the point of view that he could supply the necessary arms to the army bypassing the embargo.

Ctrl Enter
Noticed a mistake Highlight text and press. Ctrl + Enter
We are
Revolvers of the Wild WestRussian revolvers
18 comments
Information
Dear reader, to leave comments on the publication, you must to register.