The weapon of the century. Bombs 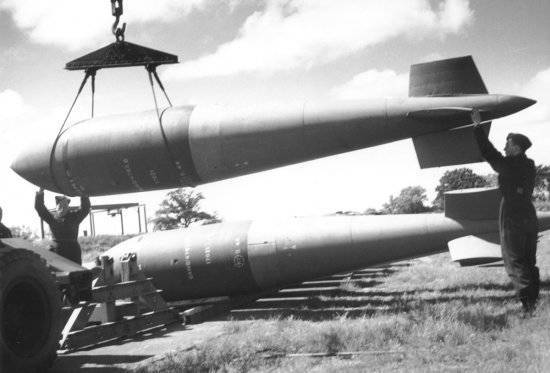 The most powerful second world bombs: Tallboy and Grand Slam

Barney Wallis did not become a famous aircraft designer: his Victory bomber design was rejected by the British military. But he became famous as the creator of the most powerful ammunition of the Second World War. His knowledge of the laws of aerodynamics allowed him to construct the Tallboy bomb in 1942. Thanks to the perfect aerodynamic form, the bomb quickly picked up speed and even broke the sound barrier in the fall if it was dropped from a height of more than 4 km. It could penetrate 3 m of reinforced concrete, go deep into the ground on 35 m, and after its explosion remained a crater with a diameter of 40 m. Equipped with torpex — powerful hexogen-based explosives — the brainchild of Wellis demonstrated efficiency when used for highly protected targets (bunkers, tunnels), and even to the ships. Thus, in two hits, the German battleship Tirpitz was first damaged. It was defended in a Norwegian fjord and presented a great danger to the convoys marching in the USSR. 12 November 1944 of the year, having received two more “Tallboy”, the ship rolled over. In short, these bombs were real combat weaponsrather than a useless race for records, and during the war years they were used not so little - 854.

This success guaranteed Barney Wallis a place in stories (he later received a knight’s title) and inspired him to create in 1943 the most powerful WWII bombs, in the construction of which much was borrowed from Tallboy. Grand Slam was also successful, demonstrating a steady (due to the stabilizer-provided rotation) flight and high penetrating power: before breaking, it could pierce up to 7 and reinforced concrete. True, for Grand Slam there was no such goal as the battleship known to the whole world, but its penetration into shelters protected by a five-meter-high concrete layer for German submarines made a proper impression. She also carried the aqueducts and dams that did not succumb to the less powerful bombs. The Grand Slam fuse could be installed on an instantaneous action (to hit targets with a shock wave) or to slow down (to destroy shelters), but in the latter case the buildings "folded" hundreds of meters from the explosion: although the shock wave from the buried detonation was relatively weak, ground shifted the foundations. Officially, the Grand Slam was called more than modestly - “Medium Capacity, 22000 lbs” - “average power, 22000 pounds” (meaning the average value of the weight of a bomb and its equipment), although in the press it received the nickname “Earthquake Bomb” (“bomb -earthquake"). Grand Slam entered service with the Royal Air Force at the end of the war, and for several months before the victory, British pilots dropped 42 such bombs. It cost quite expensive, so if the target could not be detected, the command strongly recommended the crews not to drop the Grand Slam over the sea, but to sit with it, although it was risky. In the Royal Air Force the carriers of huge bombs were the four-engine Halifax and Lancaster. Copies of the "Grand Slam" were made in the USA. 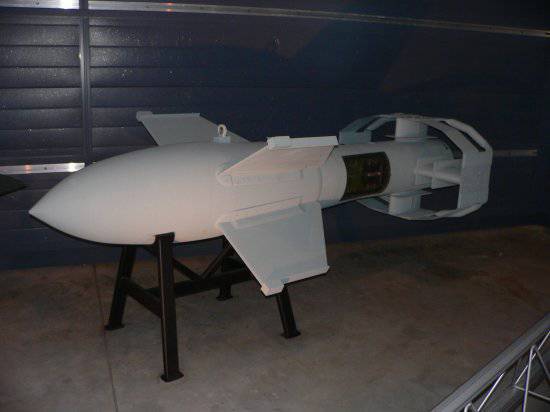 Fritz-X was the first combat model of guided weapons. His FuG 203 / 230 targeting system operated at a frequency around 49 MHz, and after a reset, the plane had to maintain a course so that the operator could follow the target and the bomb. When deviating to 350 m at the course and on 500 m in range, the flight of the bomb could be adjusted. The non-maneuverable carrier is vulnerable to fighters and anti-aircraft fire, but distance served as a defense: the recommended discharge distance, like height, was 5 km.

The Allies hastily developed jamming equipment, the Germans increased the production of bombs, and who knows what this race would have ended if not the end of the war ... 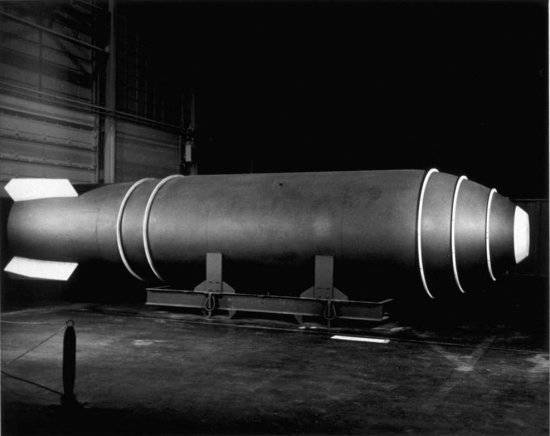 These thermonuclear bombs (Mk-17 and Mk-24 differed only in the types of plutonium "fuses") - the first that can be categorized as real weapons: with them, the B-36 bombers of the US Air Force flew to patrol. The design was not very reliable (part of the “fuse” was kept by the crew, who installed it in a bomb before discharge), but everything was subordinated to the same goal: “squeeze” the maximum energy release (there were no knots regulating the power of the explosion). Despite the slowdown in the fall of the 20-meter parachute bomb, the not-too-fast B-36 barely managed to leave the affected area. Production (Mk-17 - 200pcs., Mk-24 - 105 pcs.) Lasted from July 1954 year to November 1955-th. Their “simplified” copies were also tested to find out whether it was possible to use lithium hydrides, which did not undergo isotopic enrichment, as a surrogate for thermonuclear fuel in a nuclear war. From October 1956, the Mk-17 / 24 bombs began to be transferred to the reserve, they were replaced by more advanced Mk-36. 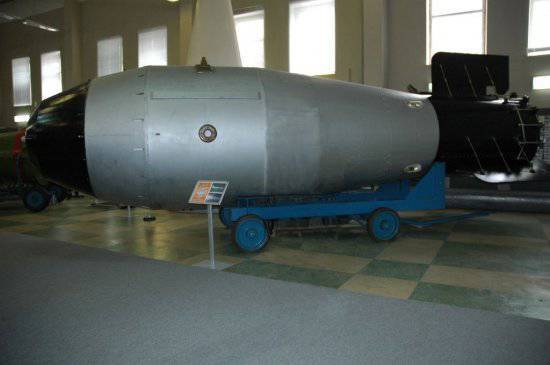 The most powerful weapon in history: An-602

After the explosion of this bomb on Novaya Zemlya 30 in October 1961, the shock wave circled the globe three times, in Norway a lot of glasses were broken. The bomb was not suitable for combat use and did not represent a serious scientific achievement, but probably helped the superpowers to feel the impasse of the nuclear race. 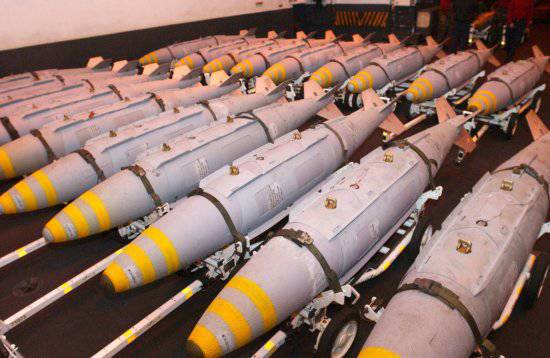 JDAM is not really a bomb, but a set of navigation equipment and controlled tail, which allows you to turn into virtually any conventional bomb. Such a bomb is induced by GPS signals, which makes the guidance independent of weather conditions. For the first time JDAM used in the bombing of Yugoslavia. Since 1997, Boeing has released more than 2000 kits for JDAM.

The most powerful bomb of the first world: RAF 1600 lbs

Developed for the HP-15 bomber (it was first named "strategic" and could lift to 3,3 t). Three HP-15 Royal Air Force received in June 1918 of the year. Their single flights made the Germans nervous, but the planned “massive raid on the Ruhr” was prevented by the end of the First World War. 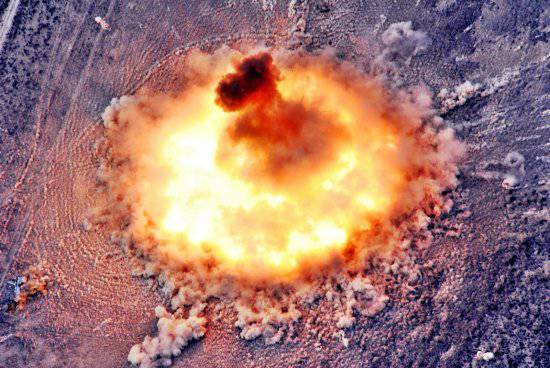 The first used in the battles (in Vietnam), space-detonating bombs. The fuel in BLU 72B is liquefied propane, in BLU 76B used from high-speed carriers, is ethylene oxide. Volumetric detonation did not provide a blasting effect, but proved to be effective for the defeat of manpower.

The most massive nuclear bomb: B-61

In 11 modifications of this most massive bomb are switchable power charges: pure fission and thermonuclear. "Penetrating" products are weighed down with "waste" uranium, powerful ones are equipped with parachutes and work even after hitting the corner of a building at a transonic speed. Since 1962, they have been produced by 3155. 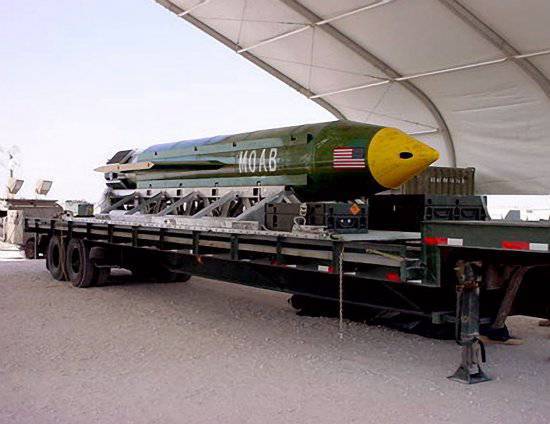 She took away the crown of the “greatest bomb” from BLU-82, but, unlike the ex-queen, who was actively used in clearing the landing sites, until she found any use. More powerful equipment (hexogen, trotyl, aluminum) and the guidance system, it would seem, increase combat capabilities, but finding a suitable target for a product of such value causes serious difficulties. The official name MOAB (Massive Ordnance Air Blast) is often unofficially decoded as Mother Of All Bombs, the “mother of all bombs”.

Ancestors of cluster munitions, proven battles in Europe and North Africa. The Luftwaffe used cassettes containing 6 to 108 SD2 bombs (Sprengbombe Dickwandig 2 kg), which were equipped with fuses of various types: instant and delayed, as well as "surprises" for sappers. Due to the scattering of submunitions, resembling the fluttering of a butterfly, the bomb was named Schmetterling ("butterfly").