October 29 2013
15
Heinkel He-219 "Filin" (German designation Heinkel He-219 "Uhu") is a twin-engine piston night fighter from the Second World War. It is noteworthy that this car was the first specially designed in Germany aircraft of this class and the first combat vehicle in the world that received ejection seats. The He-219 was one of the most effective night fighters of the Second World War. However, the Germans managed to release all 268 production aircraft: in the 1943 year - 11 units, in 1944 - 195 and in 1945 - 62.


Creation of a new night fighter for the needs of the Luftwaffe, the firm Heinkel began in January 1942, it was then that the detailed study of the machine began. The aircraft was worked out in 2 variants: Not 219 - night fighter, Not 219, high-altitude fighter-bomber. Both versions had to be equipped with FuG 212 "Lichtenstein" C-1 radar and powerful cannon armament. The bomber was supposed to carry up to 2 tons of bombs. On the fighter, the landing gear was retracted with a turn of 90 degrees, while the bomber was equipped with twin wheels of the main landing gear, which were retracted forward. As a result, the non-219b version of the chassis was recognized as more successful and accepted for both versions of the aircraft, with all the developers' efforts being thrown onto the Non-219.

Already in February 1942, a full-size mock-up of the Eagle Owl was completely ready. To speed up work on the project, the development of the He-219 drawings was carried out in parallel with the production of equipment for the production of the first prototype fighter. By March 1942, German engineers managed to prepare about 80% of all the cripples, but most of them were destroyed as a result of the raid aviation UK to the factory in Marienech. 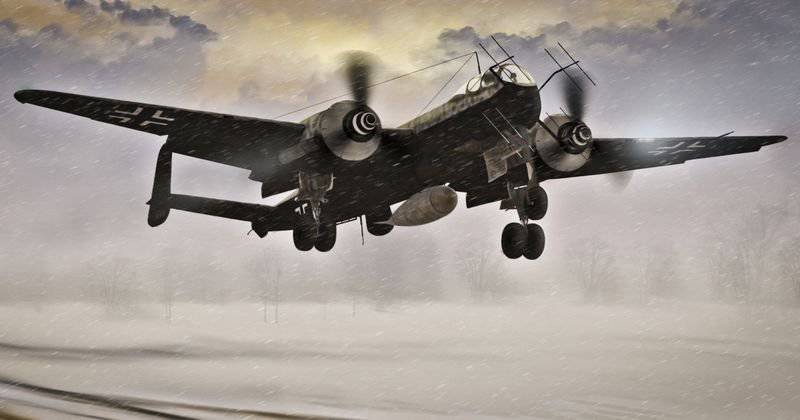 11 March 1942, the director of Daimler Benz informed the Heinkel company that due to the difficulties that had arisen with the engine of the 603G DB engine, they would be replaced with more reliable DB 603С aircraft engines. 7 April 1942 held a meeting of the mockup commission, which approved the order for 8 experienced fighter jets. Prototyping plans, their development, refinement and implementation of the flight test program were fully consistent with the scope of the model contract. June 25 1943 program reduced to 4-x prototypes, at the same time increasing the number of pre-production fighters to 20 units.

In October, 1942 of the year at the Heinkel enterprises completed the assembly of the 1-th prototype of the Non-219. In the same October, due to the increased number of Allied air raids on the plants of Rostock-Marieneh, Heinkel decided to transfer the main production of the night fighter to Vienna-Schwechat. The prototype Non-219 had a single-spar one-piece wing, equipped with a working skin. Motor nacelles were located between Frieze's ailerons and powerful slit flaps. The fuselage of the aircraft had a quadrangular cross section and was also equipped with a working skin. 2 fighter crew members were located in the cockpit back to back. In the back of the cockpit on the movable turret mounted gun MG 131. Behind the cockpit were fuel tanks with a capacity of 1100, 500 and 1000 liters. Access to a rather high positioned cockpit was made using a sliding ladder. 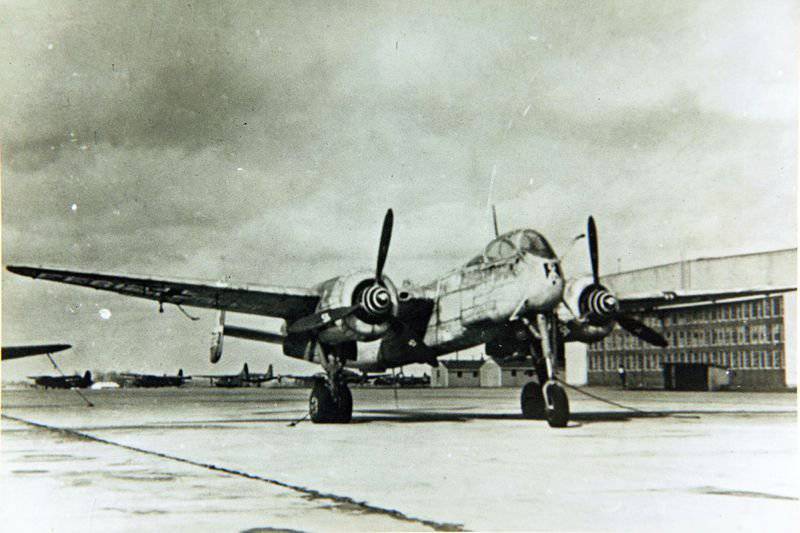 Already 6 November, 1942, test pilot Peter Gotthold, for the first time raised the Non-219 fighter into the sky. The plane spent in the air 10 minutes, the first flight passed without any incidents. However, due to bad weather conditions, the declared technical characteristics of the machine could not be achieved on this day. But even with this, the aircraft showed very good characteristics - the climb rate of 8,2 m / s, the maximum speed of 610 km / h. No complaints about the operation of the aircraft engines were noted. At the same time, a number of flaws were recorded by the test pilot: sufficiently large efforts on the steering wheel, the occurrence of minor aileron vibrations at flight speeds of 500 km / h, a too slow landing gear process, and insufficient fighter maneuverability in the vertical plane. In a summary of the flight, Peter Gotthold indicated that the plane was not yet sufficiently ready, but at the same time any German pilot with an average level of training was able to fly it. The program of the first stage of testing was completed on 9 on December 1942 of the year, after which the “Filin” was prepared for the flight to Peenemünde, where it was planned to test the vehicle’s weapon system.

Identified in the first flights deficiencies were eliminated by lengthening the fuselage and increasing the area of ​​the tail. Arms tests have also been completed successfully. After 25 March 1943, the He-219 Filin successfully conducted demonstration battles with the Ju 88S and Do 217N aircraft, the military decided to increase the order for this aircraft to 300 copies. After that, the car was sent to mass production. The first serial fighter Luftwaffe was adopted in October 1943 year.

Major modifications of the machine

He-219A-0 - fighters of the pre-production lot, produced from August 1943. The first 22 aircraft used as prototypes, received the designation He-219 from V13 to V32. These aircraft were tested a variety of engine modifications, combinations of electronic equipment and weapons. The remaining fighters were supplied in parts with DB 603А motors (44 units) or DB 603АА (1670 hp) engines, which were distinguished by the presence of more powerful compressors. The aircraft of this series were equipped with two types of radar - FuG 220 and FuG 212, while FuG 212 was often shot. These fighters also had one of the 3-x weapon options: М1 (2х20-mm guns in the wing and 4-X30-mm MK-108 under the fuselage); M2 (4х30-mm gun MK-103 under the fuselage); The M3 is the same configuration as the M1, but with the replacement of the MK-108 with the MK-103. A total of X-NUMX fighters were released in the He-104-219 version, including the Schwechat 0 and 95 at the Marien Aviation Plant. 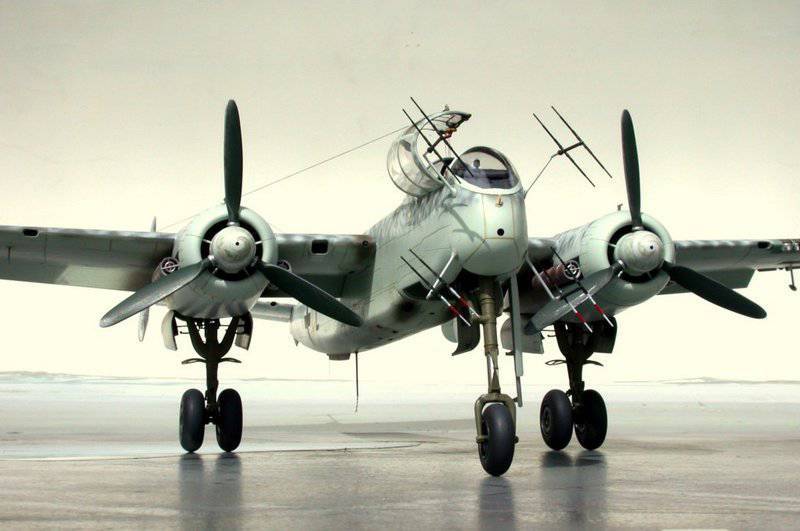 The He-219A-5 was distinguished by the installation of new DB 603E, DB 603AA or DB 603G engines, as well as increased fuel capacity. This was achieved by installing additional fuel tanks on the aircraft, which were located in the tail parts of the engine nacelles. Also, the machines differed from each other in different sets of weapons. Fighters in the A-5 version were released from the autumn of the 1944 of the year, the exact number of cars produced was not established. 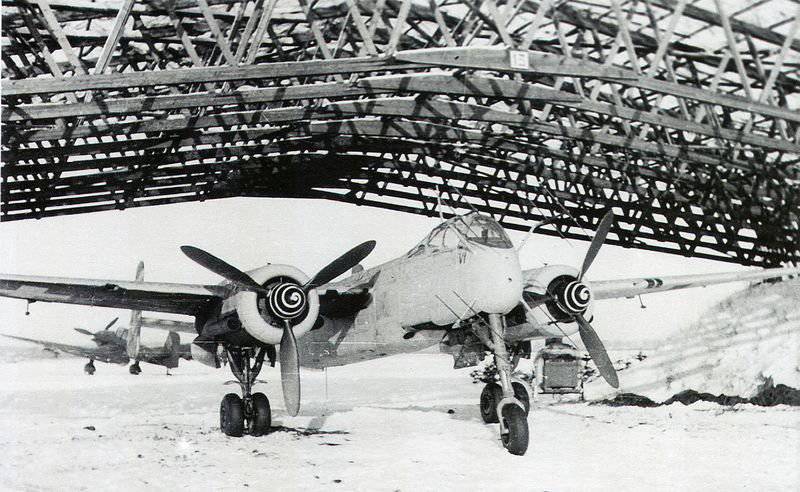 A number of modifications of the night fighter He-219 "Uhu" was not introduced into production for various reasons: He-219А-1 - originally planned version of the aircraft with engines DB 603Е; He-219А-3 - 3-local fighter-bomber with engines DB 603G; He-219А-4 - version with Jumo 222 motors and increased wing span; He-219-6 - the most lightweight version of the night hunter for the English "Moskito" with motors DB 603. Even more in-depth modernization of the aircraft were its variants He-219В, He-219С, Not 319 and Not 419, which remained forever only on the drawings.

Originally developed as a multi-purpose aircraft, the “Filin” eventually became a highly specialized machine, and as a night fighter it achieved outstanding success. However, the mass of modifications and options seriously reduced the rate of release of the aircraft. To this was added the problem of late deliveries of the Daimler-Benz and Junkers engines. Already in August, 1944's technical director Heinkel admitted that the Non-219 is the speediest and best night fighter of the Luftwaffe. However, its flight performance was not quite sufficient for intercepting the English "Mosquito". At the same time, the Non-219 Filin was a good machine, which, unlike many of its classmates, had no problems with mastering the front-line units. However, the indecision of the Technical Committee and the inexplicable rejection of the second man in the Luftwaffe Erhard Milch did not allow this machine to have a significant role in the defense of the German night sky.

All serial "Filina" favorably distinguished by the presence of radar. The first serial 12 aircraft of the Non-219A-2 / R1 aircraft was equipped with a FuG 212 C-1 radar equipped with 4-me small antennas in the nose of the fighter fuselage. Then the aircraft were equipped with one antenna for the C-1 and 4-me big for the new radar FuG 220 "Liechtenstein" SN-2. On some versions of the Non-219A-5 fighter, the C-1 radar was not deployed, and the SN-2 antennas were often installed upside down to reduce the level of interference. On the plane A-7 to "Liechtenstein" added a new radar FuG 218 "Neptune". 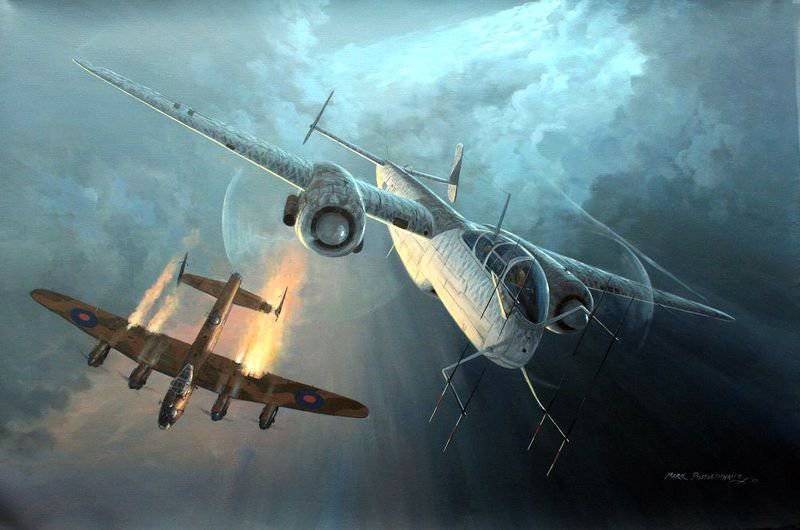 The nomenclature of night fighter armament was largely dependent on the aircraft cannons that were available at the time of the readiness of the next production aircraft. Various combinations of X-NUMX-mm guns MG-20 / 151 and 20-mm MK-30 or MK-103 were widely used. At the same time, the rate of fire of automatic guns installed in the lower fairing was high, since there was no need to install synchronizers that reduced the rate of fire. In addition, in all the "Owls", there was a place under the 108х2-mm gun MK30 of the installation "Wrong music" for firing up and down at an angle of 108 degrees, but it was installed extremely rarely in the maintenance parts.

Ctrl Enter
Noticed oshЫbku Highlight text and press. Ctrl + Enter
We are
That.154. Wooden "Anti-Mosquito" LuftwaffeCombat "Owl" Luftwaffe
15 comments
Information
Dear reader, to leave comments on the publication, you must to register.