Space Kamikaze. 45 years ago, for the first time, the Soyuz spacecraft was successfully flown with a man aboard 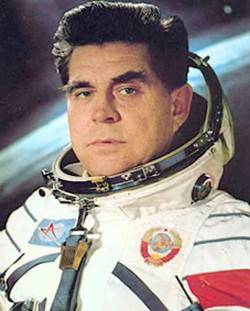 26 October 1968 was piloted by an unusual cosmonaut - already a Hero of the Soviet Union, Honored Test Pilot of the USSR, a participant in the Great Patriotic War, in particular, fighting on the Kursk Bulge, 47-year-old native of Donetsk region Georgy Beregovoi.


Determining for the extremely dangerous launch in the honorary list of regalia and achievements of Georgy Timofeyevich were the words honored test pilot, that is very experienced.

Until the moment Beregovoy finally, tangibly returned to Earth, colleagues considered him a suicide bomber.

Several times this terrible word will be sounded in the great film by Ruslan Bozhko and Alexander Ostrovsky just shown on the Russia-1 TV channel “Space Kamikaze. The angle of attack of the cosmonaut Beregovoi ”(scriptwriters A. Ostrovsky and A. Merzhanov). And this is not a big word. Why was it known to people of Beregovoy as a suicide bomber? Because they really knew that the next cosmonaut was flying on a doomed ship: before that four Soyuz had died in a row. The first three are unmanned. One exploded on the launch pad, the other two launches were considered unsuccessful. In the fourth, Soyuz-1, in April 1967, Vladimir Komarov climbed into space for the second time in his life. A crash occurred during landing, and the first burnt fragments of the pilot-cosmonaut's body were found only an hour after the descent vehicle crashed into the ground; after a while others were found, so that V.M., twice Hero of the Soviet Union Komarov has two graves: in the Kremlin wall and in the Orenburg steppe ...

There is nothing more dangerous than desolation in something significant and important, which only recently attracted the attention of admiring contemporaries. This is precisely the position of the space industry, which, as it turned out, rests solely on prominent personalities - from the Chief Designer to the completely not ordinary Master at the factory, which produced delicately executed parts for rockets and ships (about him, about the Master, he wrote brilliantly publicist Anatoly Agranovsky). But people are mortal. At the beginning of 1966, shortly before the fifth anniversary of the flight of the first cosmonaut Yuri Gagarin, Sergei Pavlovich Korolev, the brilliant General Designer, who was also distinguished by incredible rigor, even captiousness, did not become. And the space industry shuddered, confused and, one might say, lowered her hands. Went one after another failure.

In the film, the All-Russian State Television and Radio Broadcasting Company about the space feat of the Beregovoi test-pilot, it is said about the events following this:


“In the second half of the 60s, after the deafening triumph of the first years, the Soviet cosmonautics was at an impasse. Then two people who looked very similar to each other managed to save her. One had power, the other had a tester's talent ... ”

Yes, and their names were something similar. The first of these two was Leonid Ilyich Brezhnev, the second - George Timofeevich Beregovoi.

Brezhnev met Beregov in the 1961 year, when he had not yet ascended the communist throne, although he occupied a significant position in the Soviet summits. When presenting certificates of the Supreme Soviet of the USSR, he drew attention to a tall, brave Ukrainian, remarkably similar to himself (after 8 years, this similarity unexpectedly rescues Leonid Ilyich from the bullets of an not quite adequate Leningrad citizen who tried to kill him and mortally wounded the driver, and broken windows would scratch cosmonaut Beregovoy, who was traveling to the Kremlin for a reception in the first car of the motorcade). And when the Secretary General, who took this post in October 1964 of the year, was informed about the ongoing difficulties with the Soyuz ship, he said: “Well, there you have a test pilot in the squad ...”

Beregovoy was enlisted in the cosmonaut corps in the same year 1964. Younger colleagues met him with hostility: “The aged pet came for fame”. They meant that Beregovoy at one time served under the leadership of a prominent commander Nikolai Kamanin, who took care of future astronauts.

Yes, but Coastline glory was not to occupy. Once he asked cosmonaut Zholobov: “Vitalka, what year are you?” - “1937”, he answered. "I wear this headset from 37." After graduating from Enakiev Aero Club together with his elder brother (Mikhail Timofeevich, now Lieutenant-General-Engineer, participated in the filming of a film about his younger brother), Georgy became a professional pilot. From the first days of World War II, he participated in air battles. He flew the attack aircraft Il-2, which the Germans called "plague", i.e. "Black death", if literally. The “flying tank” was tenacious and because of this vitality is omnipresent, and that is why our hero said about the IL-2: “All kinds of weapons».

The pilot of the Coast was inventive. Once, when he saw the superior forces of the enemy, he ordered the followers to go on a strafing flight, and they really dropped to a height of one and a half or two meters (!) Above the sunflower field, so they completely shaved off the heads of the highest sunflowers - but the squadron survived! Then the comrades told him: “Zorka, you can live and fight with you”.

He was shot down three times, but he walked away from death. In 23, he became the Hero of the Soviet Union.

At the front, Georgy Beregovoi did not part with the American pilot Jimmy Collins’s “Test Pilot” book published in the USSR and after the end of the war he himself became a test pilot. The first - and extremely serious test of many others was for him the MiG-15. The aircraft pursued the accident. He fell into a spin not like the others, quite unexpectedly for pilots. Beregovaya was the first to discover the temper of a fighter jet and earned the nickname ... Comrade Corkscrew. Since then, all military pilots began to fly on the coastal science. Georgy Timofeevich’s cosmonautics teacher, younger than him by 13 years, the renowned space pilot, twice Hero of the Soviet Union Alexei Arkhipovich Leonov said about him in the film as follows: “For him, the wings were an extension of his arms”.

So it was not at all for glory that Beregovoy came to cosmonautics. Now we can say that fate itself has led him - who, apart from him, would have guessed the character of the “Union”?

Yury Gagarin unexpectedly played a tragic and mystical role in the fate of the Beregovoy, and therefore of the Soyuz, and of our entire astronautics. For some reason he told George Timofeevich: “As long as I am alive, you will not fly into space.” This is extremely unpleasant to think about - after all, we all loved the cheerful Gagarin very much and respected the serious Beregovoi very much - but that’s what happened. Pilot-cosmonaut Gagarin died in the spring of 68, and in the autumn of the same year it was decided to send Beregovoy test-pilot into space.

In the photo of George Beregovoy shown in the film before the start, he is so joyful, so pleased that it is difficult to recognize him. It was as if someone wrote on his face: “You will not catch up with us!” - although in fact he spoke differently: “Everything, they won't catch me anymore.” That is, they will not be separated from flights, they will not be stopped.

Good start. Going into Earth orbit. The first turn. Approaching an unmanned ship, which should dock ... And - bad luck. It was impossible to repeat the docking attempt - there was only fuel left for landing.

He did not know that for everyone in the space industry, the Tassov phrase “All systems of the ship were working normally” was already a victory, which this not-so-young test pilot with a real military background had achieved.

Coast did not immediately understand what happened in space. And then somehow he realized that the ship approached the drone upside down - the unusual state of weightlessness at first does not allow the astronaut to orient in space. But he made a very detailed report on the flight and possible shortcomings of the ship design.

Later, the engineers would call the order to dock at the first turn stupid, but for Georgiy Timofeevich it was a poor consolation. Until the end of his days, it seemed to him that he "had not completed the assignments."

Although in fact he over-fulfilled it. Major General of the Medical Service Vladimir Ponomarenko said in the film: “He, Beregovoy, was the first cosmonaut who was not afraid to tell the designers what he considered unsuccessful in the design of the spacecraft.” He did not make excuses - he was looking for reasons. Found and, in fact, became a co-designer of the "Union", which to this day is considered the most reliable spacecraft.

The ship is excellent, and the story of the person who saved his reputation is also excellent. Only one question doesn’t give rest: why such a beautifully made one, so necessary for other people, even younger people, to be remembered about the national significance of cosmonautics, the film was shown already after midnight, five minutes before the performance of the National Anthem? No answer…

Ctrl Enter
Noticed oshЫbku Highlight text and press. Ctrl + Enter
We are
From the ship to orbit - light floating cosmodrome "Selena"Space trampoline for the United States. Tribute to Dmitry Rogozin
10 comments
Information
Dear reader, to leave comments on the publication, you must to register.