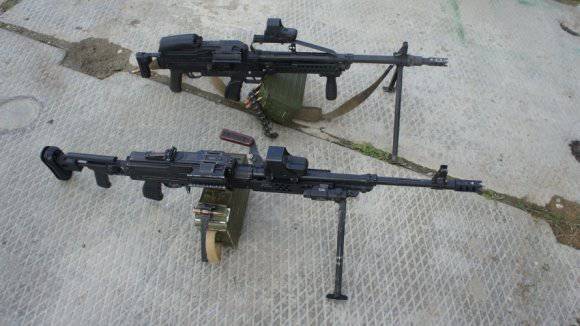 The Kovrov Plant named after Dyagtereva developed a shortened assault light machine gun "Pecheneg" according to the "bull-pap" scheme. Weapon designed for special forces. The rifle cartridge caliber 7,62 × 53 is used as ammunition.

Oleg Bochkarev, deputy chairman of the Military Industrial Commission, said that the new shortened machine gun is part of one of the options for the “Warrior” advanced outfit.

The new Pecheneg was demonstrated to the President in Izhevsk on 18 September, when he visited the Kalashnikov concern. Specifications machine gun has not been disclosed.

The new assault machine gun differs from the usual “Pechenega” in the absence of a butt, instead of it the L-shaped short underplate with a soft butt plate and a fire control stick held forward (a bullpup scheme) is installed. Due to this, the machine gun became shorter by 27 cm, lighter by 0,5 kg. The length of the trunk 65 cm, the same as in the usual "Pechenega".

The receiver itself has not changed, except for a pair of holes on its lid for fixing the soft stop under the cheek. The emphasis itself is placed under the cheek in such a way that it closes the aiming bar of the machine gun, thereby nullifying the possibility of firing through open aiming devices. For aiming fire used collimator or optical sights, mounted on Picatinny rail, located on the handle for transferring a machine gun.

The standard flame arrester has been replaced with the DTK-1P muzzle brake compensator, manufactured by milling a metal billet. DTK-1P is designed for installation on PC, PKM, PKT and “LIVER”. Reduces returns, compensates for a throw.

The gas tube in the machine gun is closed with the B-50 light-alloy forearm, which has three guides for attaching additional equipment. A tactical handle is supplied with the forearm. However, this was not without flaws - the forearm complicates access to the gas regulator, and requires complete dismantling during maintenance and cleaning of the machine gun, dirt accumulates too well. At the base of the forearm there is an attachment for the B-25U bracket, designed to install an additional handle at an angle 45 °.

But the most interesting novelty of the machine gun is fixed on the standard place of fastening of the box for cartridges. This is the trigger duplication unit. With the help of it, an additional pistol grip and trigger are brought to the center of the machine gun, which allows turning the Pechenega layout, though not into a full-fledged one, but bullfights (eng. Bullpup is a layout scheme for rifle and machine guns, in which the percussion mechanism and magazine are located in the butt behind the trigger). Thanks to this arrangement, you can increase the length of the barrel without increasing the overall length of the weapon.

A very interesting solution, since the trigger force from an additional block is transmitted to the main trigger with the help of a normal straight thrust. At the same time, the thrust itself does not interfere with firing with the help of the main trigger group, only a duplicate switch of the fuse is not yet provided. As well as the bolt group, it is very inconvenient to cock, it is necessary to break away from the butt. The handle itself has an anatomical shape with grooves for the fingers and is rubberized on top, which allows you to firmly hold it even with wet hands. 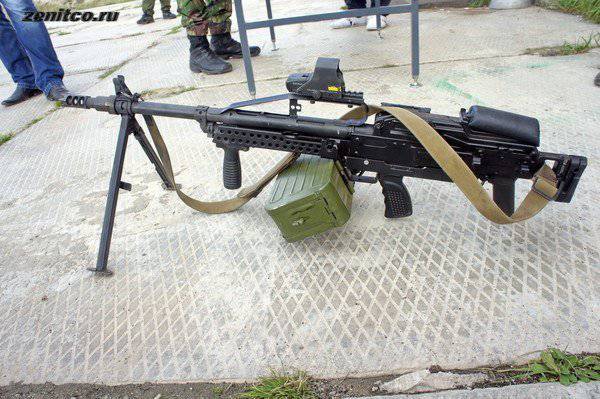 The box with cartridges is attached directly to the bracket of the backup group at an angle of 70 degrees. This situation causes a slight distortion of the machine-gun belt, which can adversely affect in battle and greatly loads the trigger guard. Yes, and install the box itself is inconvenient, especially in a hurry.

Holding this modification in your hands, you have double feelings: on the one hand, it is clear that the professionals worked, and on the other hand, there is a place to refine the design. For example, I would very much like to see a full-fledged folding butt that would allow firing from two positions - compact (pseudo bullpup) and with a full-sized butt, and the emphasis under the cheek was nevertheless worth raising higher, as well as mounting Picatinny rail, it was possible to use an open sight. Mounting the box to move to the forearm, in order to unload the backup unit trigger.

The design of the machine gun itself is very interesting and, most likely, it will be demanded by special forces as a weapon for urban combat, where the battlefield distance does not exceed several hundred meters, and the compactness of the weapon is much more important than good balance and high accuracy of the battlefield. Such a machine gun is ideal for barrage fire, or suppression of firing points from close range.

Minuses of modernization:
- lack of open sights;
- the inability to quickly replace external sights due to the use of Picatinny rail;
- the inability of the normal transfer of weapons due to the sights located on the handle;
- the fuse is located in the same place, it is necessary to be distracted by its switching, which is quite inconvenient in the absence of a normal butt;
- access to the gas regulator when installing the LCC and the lamp becomes inconvenient;
- the position of the box with the cartridges under the slope causes bending of the tape, which may cause difficulties with the supply of ammunition, and gives a strong load on the trigger guard;
- when servicing a weapon to remove dirt from under the forearm, it will have to be removed, which is a little difficult to do in field conditions and without a tool;
- inconvenient fastening of the belt on the butt;
- the impossibility of fighting with the use of the machine;
- violation of the weight distribution of weapons, which obviously will affect the accuracy of the battle, although for urban combat it is not so important. 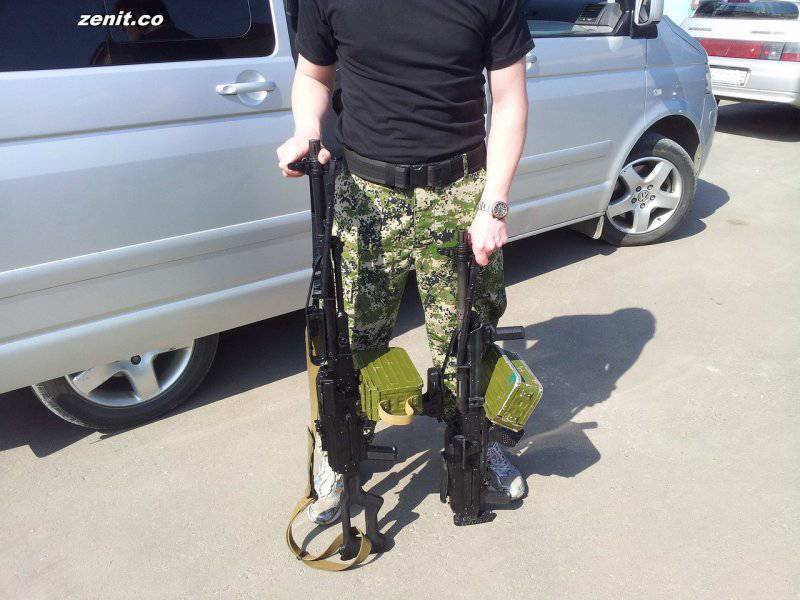 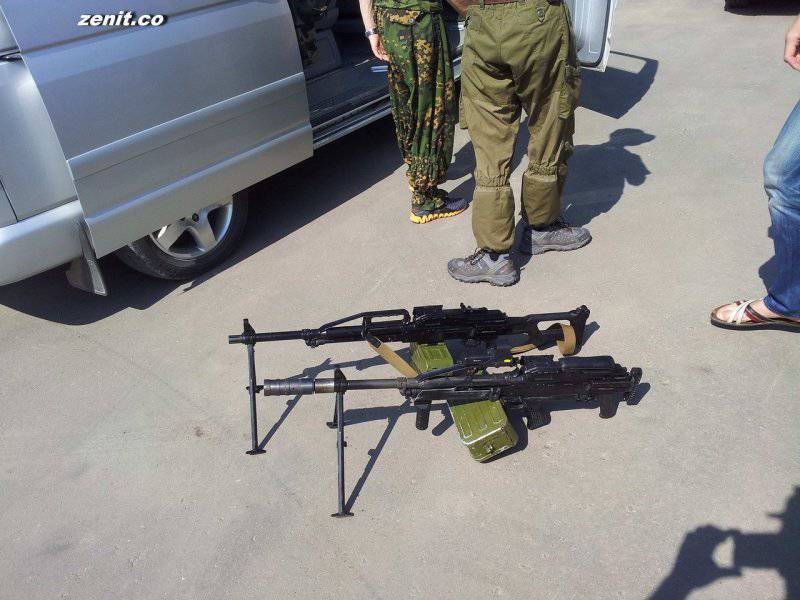 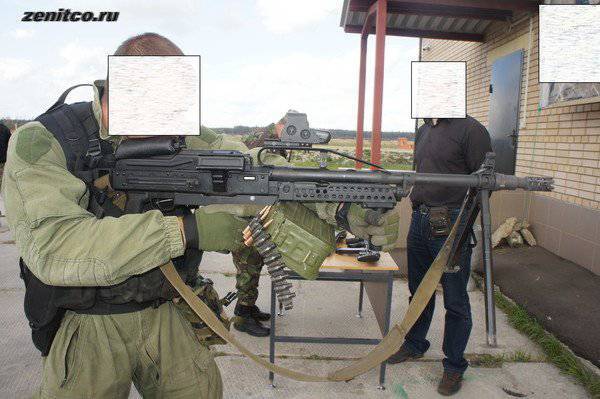 Ctrl Enter
Noticed oshЫbku Highlight text and press. Ctrl + Enter
We are
From “Madsen” to “Pecheneg” is not an easy way!The weapon of victory. "Degtyaryov Infantry" - machine gun DP 85 years
72 comments
Information
Dear reader, to leave comments on the publication, you must to register.