October 24 2013
54
An important feature of modern armored vehicles is the ability to install various weapons or combat modules. All modern armored cars are equipped with a universal shoulder strap, on which a simple turret or a remotely controlled weapon system can be mounted. Not an exception, and the Russian armored car "Tiger". For example, at recent exhibitions “Innovation Day of the Ministry of Defense” and Russian Arms Expo-2013, Russian defense enterprises, together with their foreign colleagues, presented at once three options for arming domestic armored vehicles.


"Tiger" with the combat module of domestic development

In August this year, at the exhibition “Innovation Day of the Ministry of Defense”, the company “Weapons workshops "showed its version of armament armored car" Tiger "with a remotely controlled combat module. Kovrov Electromechanical Plant (KEMZ) became a partner in the creation of a new weapons complex. 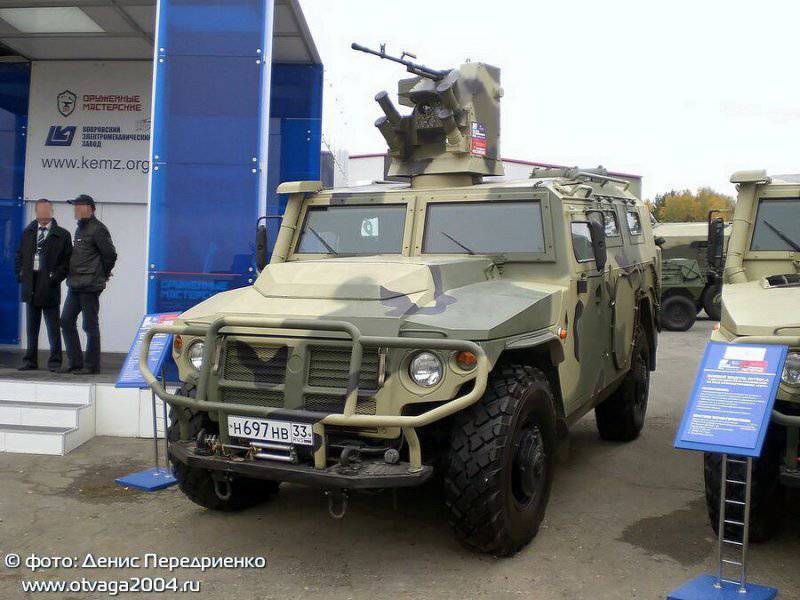 In a number of key points, the Kovrov project of the combat module resembles some foreign developments, but it has some differences. So, on the rotary unit of the combat module is a U-shaped support for weapons and sighting equipment. A characteristic difference between the domestic version of the combat module for the Tiger armored car from the foreign ones presented recently is the location of weapons and sighting equipment. For ease of guidance and operation, weapons and electronic equipment are mounted on a single swinging platform, providing vertical guidance in the range from -20 ° to + 70 °. The Kovrov combat module presented at the exhibition was armed with an 7,62-mm PKT machine gun. The cartridge box was placed on the outer right side of the U-shaped support. In addition, four smoke grenade launchers were installed on its front faces.

According to official data, the new domestic combat module can carry weapons of various types. Currently it is possible to install a PKT rifle-caliber machine gun or a large-caliber Kord. Also, the customer can purchase a combat module with an automatic grenade launcher AGS-40 "Balkan" caliber 40 mm. According to some data, the combat module created by KEMZ has a bulletproof booking, due to which its total weight is 170 kg. 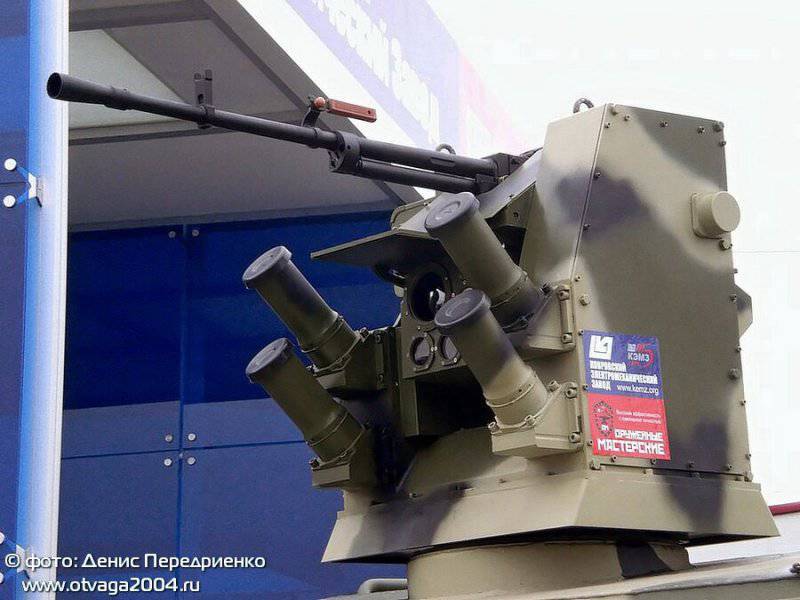 In the sighting equipment unit, mounted on the same platform with the weapon, there are a television camera, a thermal imager and a laser range finder. The signal from the cameras is transmitted to the monitor of the operator. The system is controlled by a remote control located inside the base combat vehicle.

The second development of the company "Weapon workshops", created in collaboration with other organizations, was the "Tiger" with the combat module of the Italian company Oto Melara. The combat module HITROLE Light is designed for installation on various combat vehicles, including armored cars. In the basic version of this combat module is equipped with a large-caliber machine gun M2HB or 7,62-mm machine gun MG3. As follows from the available information, a modified module with new weapons was installed on the armored vehicle "Tiger". 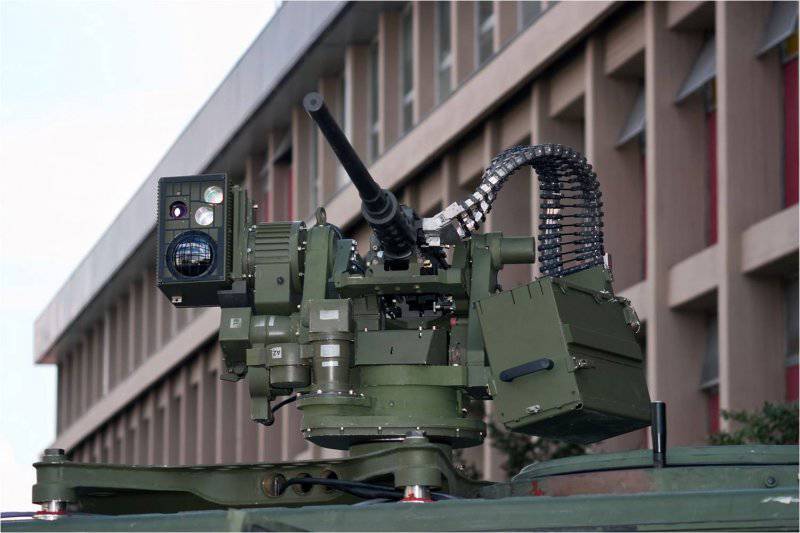 The available photographic materials show that the HITROLE Light combat module mounted on the Tigre is armed with a PCT 7,62-mm machine gun. In this case, the Italian module has undergone some modifications. The fact is that machine guns M2HB and MG3 accept cartridge tape through the window on the left side of the receiver. In Russian machine guns, such as PKT or NSV, cartridges are served on the right. In this regard, the employees of Oto Melara had to take appropriate measures: all units of the combat module were reassembled in a “mirror” manner.

The main nuances of the architecture of the module HITROLE Light remained the same. The main element of the combat module is a swivel unit on which weapons and equipment are mounted. In the central part of it is placed the machine gun of the desired type with the vertical guidance system in the sector from -20 ° to + 70 °. In the original version, a box for cartridges is installed on the left side of the rotary unit, however, due to the design features of the Russian small arms in the new version of the combat module, the ammunition box has been moved to the right side. The left part of the rotary unit now serves as a place for mounting sighting equipment. A television camera and a night vision device are placed in the armored casing. The signal from the observation instruments is transmitted to the operator’s console installed inside the base combat vehicle. Thus, the combat module Oto Melara HITROLE Light provides the attack of the enemy at any time of the day without the need to leave the machine.

Jane's edition reports that the armored vehicle "Tiger" with the combat module HITROLE Light in the "mirror" version with a PKT machine gun was tested. Information on test shooting results, etc. no tests yet. Probably, the combat module showed quite high performance, since it has already been adopted by the Italian army and is used on several dozen combat vehicles of different models.

LLC “Military Industrial Company” at the RAE-2013 exhibition showed a car with a French Nexter ARX20 combat module. A characteristic difference of this combat module from other systems is its high firepower. The company Nexter was able to create a combat module, armed with a small-caliber automatic gun, but at the same time suitable for installation on armored cars. Depending on the wishes of the customer, the ARX20 combat module can be armed with an 20 or 30 mm automatic cannon. The basic version uses a Nexter M20 261-mm gun with a rate of fire up to 750 shots per minute. According to some information, it is possible to use weapons of other types that meet the requirements of the customer, including large-caliber machine guns. As an additional weapon, the ARX20 combat module carries a rifle caliber machine gun.

The design of the combat module Nexter ARX20 consists of several main blocks. All the armament and equipment is mounted on a turntable, which, in turn, is installed on the combat vehicle chase. In the central part of the platform on the U-shaped support is mounted a block with a weapon. For the convenience of targeting gun / large-caliber machine gun and 7,62-mm machine gun mounted in the general swinging unit. To the left of the weapon are mounted boxes for ammunition and ammunition supply system. The sighting equipment block is located on the right side of the base platform. The combat module Nexter ARX20 is equipped with a combined sight, allowing you to monitor the situation and attack targets at any time of the day. High accuracy of fire is provided by a two-plane weapon stabilizer. Swivel and inclined mechanisms of the combat module provide guidance weapons in any direction in azimuth. Allowable vertical guidance angles range from -15 ° to + 60 °. Control of the weapon is carried out with the help of a remote control installed in the cab of the armored vehicle.

Despite the powerful weapons, the Nexter ARX20 combat module with an automatic cannon caliber 20 mm turned out to be quite light: its weight does not exceed 270 kg. It is the dimensions and weight that allowed the combat module to be installed on the 4x4 vehicles. The ARX20 module is currently used on Panhard VBL and HMMWV vehicles, as well as on VAB armored personnel carriers. In addition, an exhibit at a recent exhibition showed the fundamental possibility of installing a French combat module on a Russian armored car. Any information about the testing machine "Tiger" with the combat module Nexter ARX20 is not yet available. Probably, such tests may begin in the near future.

As we can see, all three versions of armor of the Tiger armored vehicles, presented recently, have both common features and differences. The same can be said about the advantages or disadvantages of the combat modules used. For example, the use of an automatic gun caliber 20 mm can be considered a big advantage of the French Nexter ARX20 module. At the same time, there is reason to believe that the level of protection of various mechanisms of the French combat module is insufficient. In turn, the combat module from the KEMZ is well protected, but the most powerful weapon suitable for installation on it belongs to the class of large-caliber machine guns or automatic grenade launchers. This fact accordingly affects the combat potential of the machine with such a module.

Thus, it turns out that a potential customer should make a choice of an armored car "Tiger" with one or another weapon option, taking into account their own needs and views on the use of such equipment. The domestic defense industry together with foreign colleagues is ready to present several options for armored vehicles, each of which can be the subject of an order. Which of them will go to the troops or will be sold to third countries - time will tell.

Ctrl Enter
Noticed oshЫbku Highlight text and press. Ctrl + Enter
We are
Fire power for all occasions. Overview of combat modules and towers for cars of light and medium weight categories (3 part from 5)Heavy armored cars of the Sd.Kfz family. 231 8-Rad
54 comments
Information
Dear reader, to leave comments on the publication, you must to register.