Why Russian military reforms do not work. A look from the USA 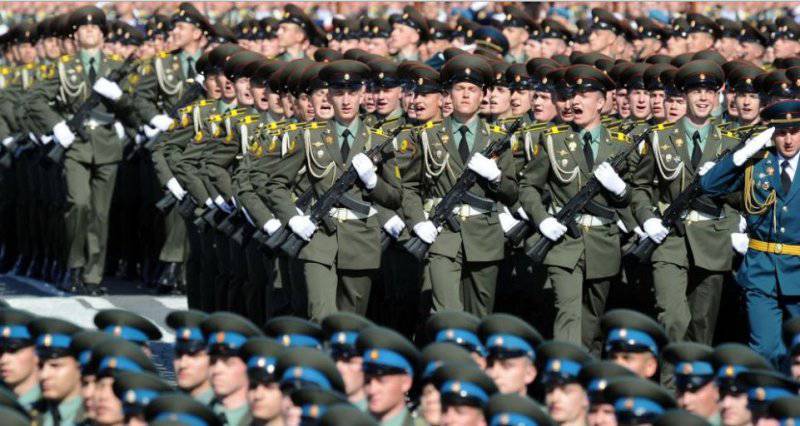 The Russian army recently announced that new recruits could bring their domestic dogs to the army, if the animals had completed a special training course and acquired useful skills for the army. For example, such as the detection of drugs and explosives or the ability to follow the trail and perform security functions. The military want more recruits and a higher quality, and a new approach (like, for example, the opportunity to take their dog for military service) is intended to facilitate this. Many recruits in Russia traditionally have well-trained dogs, and the new military initiative is not as strange as it may seem at first glance.

Over the past decade, the Russian government has been under growing pressure, urging it to get rid of universal military service. The government is unable to do this, because very few people are ready to join the armed forces (even for a decent salary). The government improved living conditions (significantly), made several efforts to reduce the traditional cruelty directed to the recruit, reduced the term of military service to one year (from two years), became more tolerant to refusal from military service for medical reasons, and also called many marginal recruits (with some diseases, overweight, criminal record, drug users) to recruit the necessary number of soldiers in the army and the Ministry of the Interior. All this was not enough, and much remains to be done to even simply recruit a million people in military uniform.

But this means that even elite airborne and special-purpose units use a large number of conscripts who voluntarily expressed a desire to serve in them. Most of these young guys seek, after serving a year, to master skills that can be useful after demobilization. Few want to continue to wear uniforms and make a military career. This is primarily due to the fact that the Russian army is considered as a bad (crippled institution) and is unlikely to get any better soon. With such a huge number of soldiers serving the whole year of military service, an increasing number of the best officers and sergeants are not able to cope with such a number of alcoholics, drug addicts and petty criminals who are called to the army only to fulfill the standards for conscription. Due to the dismissal of the best officers and the growing number of poorly trained and unreliable draftees, the Russian army looks more like a mirage than an effective combat (or even police) organization.

The current state of the army is very different from what it was before. At the time of the collapse of the Soviet Union in 1991, he had five million people in his armed forces. Now this number is less than one million only in Russia (which accounts for about half of the population of the Soviet Union, but makes up most of its territory). Despite the fact that the Russian armed forces lost more than 80 percent of their forces, starting with 1991, a disproportionately large number of officers remained in the army. Ten years ago, Russia had about 1,2 a million military personnel (400000 in the army itself, the rest in the militias). However, the number of officers was approximately 355000. This is more than 1 to 3. With all this, about 40000 officer positions still remained vacant. The reorganization reduced more than half of the officer positions, but left many dissatisfied officers.

Meanwhile, the Russian Interior Ministry noted that their troops, consisting of conscripts, are far from being as effective as if they consisted of contract servicemen, and decided to replace all conscripts with contract servicemen. This is expensive, but the Ministry of Internal Affairs puts pressure on the fact that it is his paramilitaries who mainly participate in the fighting these days and deserve the best contingent. Additional pressure comes from the fact that Russia is hosting the Winter Olympics at the beginning of 2014, and Russian Islamic terrorist groups are threatening to thwart this event (which will be held in Sochi on the Black Sea coast north of the Caucasus). The new program "bring your trained dog" will be especially useful for recruits seeking to serve in the Ministry of Internal Affairs (where about as many recruits are required as in the Ministry of Defense).

For most of the last decade, most of the "combat units" that fought with terrorists in the Caucasus belonged to the Ministry of Internal Affairs. There they are assisted by army special forces and airborne troops. The army would prefer to keep most of these elite troops out of the Caucasus and ready for other emergencies. MIA does not mind, and is trying to improve its militias, increasing the number of contractors and reducing the number of recruits.

Russian efforts to improve the quality of their servicemen always face the lingering problems of military service. At the beginning of 2013, the Russian government, under public pressure, agreed not to send conscripts to battle. Only contract soldiers will fight, until there is a large-scale war. Parents also complain that their sons recruits are sent to internal troops, and then after a short training in the Caucasus. The actual wording of the new rules allows sending conscripts to non-combat positions in the Caucasus, where terrorism is quite common. This practice is not widely publicized. Despite the fact that these new rules were announced without fanfare, the information quickly reached the parents of draftees and angered them. This was regarded as a ploy to save money (less training) at the expense of young recruits, and still send them to dangerous service in the Caucasus. While conscripts will not chase Islamic terrorists there, they themselves will be the target of terrorist attacks, and because of poor training, they will be less able to protect themselves. Parents came to this conclusion. The military and the Ministry of Internal Affairs consider these changes as a necessity, because conscripts now serve only for one year, not two, as before, and their careful preparation is expensive and, most importantly, in vain, since most of them will leave the army after this year . A more serious problem is that there are fewer and fewer people of military age in Russia, and she also has difficulties in attracting contractors.

It is currently planned for the next few years to increase the number of contract soldiers in the army to 425000 (in the army and the Ministry of Internal Affairs). The biggest problem with maintaining the appeal is that the number of 18-year-olds is rapidly declining from year to year. The current draftees were born after the collapse of the Soviet Union. Since then, the birth rate has declined. Not so much because the Soviet Union collapsed, but more because of the economic depression (caused by decades of communist rule), which accelerated the collapse of the communist regime. The number of potential draftees decreased from 1,5 million per year at the start of 1990's to 800 000 today. Less than half of these potential recruits are in recruiting stations, and many have criminal records (or criminal tendencies), which helps to maintain bullying of new recruits, which in turn makes military service so undesirable.

Russia is trying to change the attitude of society to the armed forces by issuing all new reforms and programs. However, most of these efforts do not bring the desired result. The blame lies on the Internet. Surveys consistently show that most young men of military age do not want to serve in the army, and the main reason is hazing and prison conditions in the barracks. The new generation of sergeants and improved living conditions are designed to provide an atmosphere that will not scare recruits and contract soldiers.

There are other problems in the Russian armed forces. It is believed that corruption and outright theft eat around 20 percent of the military budget. So just spending more money on the army is not fixing the problem. Worse, many, if not most, Russian weapons manufacturers are corrupt and incompetent. The situation has become so bad that many reform-minded generals and admirals prefer to buy foreign weapon. This means that you have to pay more, but the quality of products is much higher, and the armed forces receive the equipment on time. The Russian armed forces need fundamental reforms, but there is serious resistance from those who are comfortable living the old way.

We are in Yandex Zen
Day dog ​​handlers MIA. How police dog breeding appeared and developed
The action “Military service under the contract is your choice!” In Rostov-on-Don: future contract servicemen, exhibitions and “Russian Knights”
70 comments
Information
Dear reader, to leave comments on the publication, you must to register.