October 22 2013
37
The 3K96 Redut ship complex, also known as Polyment Redut, is a new Russian sea-based air defense missile system that favorably differs by the presence of a vertical missile launch system. This complex is designed to equip ships of the classes of the patrol ship (TFR), frigate and destroyer. The complex will be installed on all ships of the new generation of the Russian Navy. Work on the creation of the complex is carried out GSKB concern defense "Almaz-Antey." The Redut complex in its capabilities, and in part in the composition of the air defense system, will be maximally unified with the air defense system Vityaz. The first stage of the preliminary complex tests of the air defense missile system was completed in 2009 year.


In 2012, the Russian media wrote that the complex was entering the final stage of testing - launches from a regular carrier at sea. It was planned to complete the tests before the end of 2012, but this was not possible. During the briefing, which took place as part of the MAKS-2013 air show, the general director of the Almaz-Antey Air Defense Concern noted that the tests of the new air defense system were interrupted in 2012 due to the fire at the Submarine CMS (20380 project). This year, the ship after the end of the repair arrived to resume tests of the air defense system. He also said that on the main frigate of the 22350 “Admiral Gorshkov” project, the “Reduce” tests will begin no earlier than 2014 of the year, as the ship is ready. At the same time, the 9М96, 9М96Д and 9М100 missiles are ready for testing.

The Redut radar system includes the Polyment radar, which has phased array antenna 4. Each antenna post FAR is able to simultaneously accompany 4 air targets and direct anti-aircraft missiles at them, the maximum number of simultaneously fired targets is 16. The “Redut” air defense missile system is able to interact with the ZRAK and ZAK of a warship to achieve the goals that have broken through at the minimum distance. 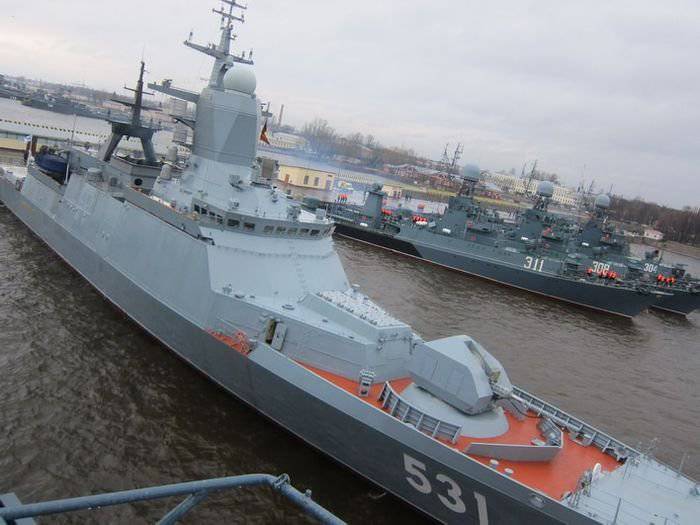 The complex’s missiles are housed in vertical launch installations (WUPs), which consist of 4 or 8 cells each. Each cell contains the 1 transport and launch container (TLC) with a long or medium range missile (9М96Е, 9М96Е2), and also 4 short range missiles (9М100). When launching missiles, the so-called “cold” launch is used, the missile's main engine is activated after the “mortar” launch. The rocket is ejected from a vertically mounted TLC using a charge of compressed air to a height of 30 meters, and then turns to the target using the existing gas-dynamic system. Thanks to this solution, it was significantly possible to reduce the minimum target interception distance. The use of the gas-dynamic system provides the super-maneuverability regime for the anti-aircraft missile, it can increase the ZUR loading by 0,025g in 20 seconds. The fire rate of the complex is 1 rocket per second.

Inertial command guidance is used for the 9М96Е, 9М96Е2 SAMs on the cruise trajectory, and active radar homing is used on the final flight trajectory. The short-range anti-aircraft missile 9М100 received an infrared homing head. It seizes the target immediately after the launch of the rocket. According to computer simulation and field tests, the 9М96Е and 9М96Е2 anti-aircraft missiles are able to guarantee a direct hit on the head of a tactical missile with a probability of 0,7, in the remaining 30% of cases the deviation from the target will not exceed a few meters. The probability of hitting the helicopter is 0,9, and the aircraft is 0,8. The warhead of the rocket has a mass of 24 kg., Due to the use of multipoint initiation, it has a controlled lesion field.

LAW 3K96 should be the main means of defense for the TFR project 20380, starting with the 2-series ship. The complex will be mounted in the bow of the superstructure of the ship in front of the bridge, instead of the Kortik-M SIGN. Here, the 3 module of the HVP ADR “Redut” module will be installed with 4 cells in each (total 12 cells). Thus, the TFR ammunition will make 12 9М96Е or 48 9М100 missiles, or their various combinations within the total capacity of the vertical launch installations.

On the modernized TFR of the 20385 project, the Redut air defense missile system was transferred from the bow of the ship to the stern (in their place was installed the air defense system of the UBCS shooting complex). On the ship there will be 4 module with 4 cells in each (total 16 cells). They are installed side by side between the helipad and the hangar. The ammunition will be 16 9М96Е or 64 9М100 missiles, or various combinations within the total capacity of the vertical launch installations.

Also, these air defense complexes will receive new Russian frigates of the 22350 project, the complex will be located in the bow of the ship in front of the navigating bridge, the ship will have the 4 module for 8 cells in each (total 32 cells). Thus, the frigate’s ammunition will be up to 32 9М96Е or 128 9М100 missiles, as well as their various combinations within the overall capacity of the vertical launch installations. 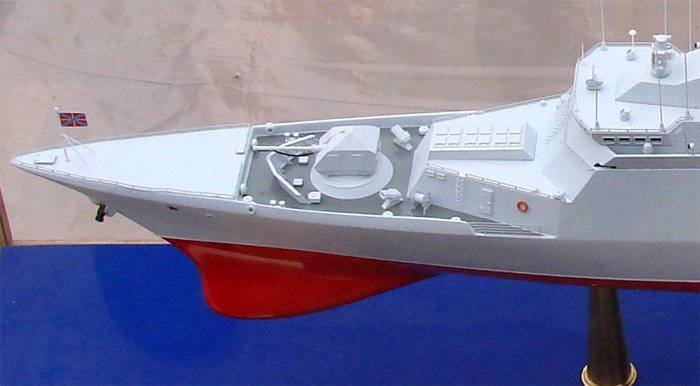 In addition, the new Russian Caliber and Poliment-Redut complexes will have to receive the Admiral Nakhimov heavy nuclear missile cruiser (TARKR). As a result of modernization, the cruiser will become a full-fledged multi-purpose ship capable of delivering attacks not only on surface and underwater targets, but also on coastal targets. The contract for the modernization of the ship was signed on June 13, 2013; before that, starting in 1999, the ship was moored at the pier of the shipyard. According to Sergei Marichev, deputy general director of the Severodvinsk shipyard, the amount of work on the cruiser will be comparable to the work on modernization and repair of the Vikramaditya aircraft carrier for the Indian Navy. After modernization, “Admiral Nakhimov” should become the most modern nuclear cruiser in the Russian Navy. In combat fleet the ship will enter in 2018.

Ctrl Enter
Noticed oshЫbku Highlight text and press. Ctrl + Enter
We are
Shipbuilding Program of the Russian Navy, or a Very Bad Premonition (part of 3)"SEA BREEZE 2012" - press tour on the destroyer USS JASON DUNHAM
37 comments
Information
Dear reader, to leave comments on the publication, you must to register.