October 22 2013
96
Infantry fighting vehicle BMP-2, created in the late seventies, still remains in service with several dozen countries. However, over the decades that have passed since the start of mass production, these machines have become outdated and no longer meet all the requirements for this class of equipment. In this connection, various modernization projects for the BMP-2 appear regularly, the purpose of which is to increase the level of protection, effectiveness in combat, etc. A few weeks ago, two new versions of the BMP-2 update were created by Russian designers. 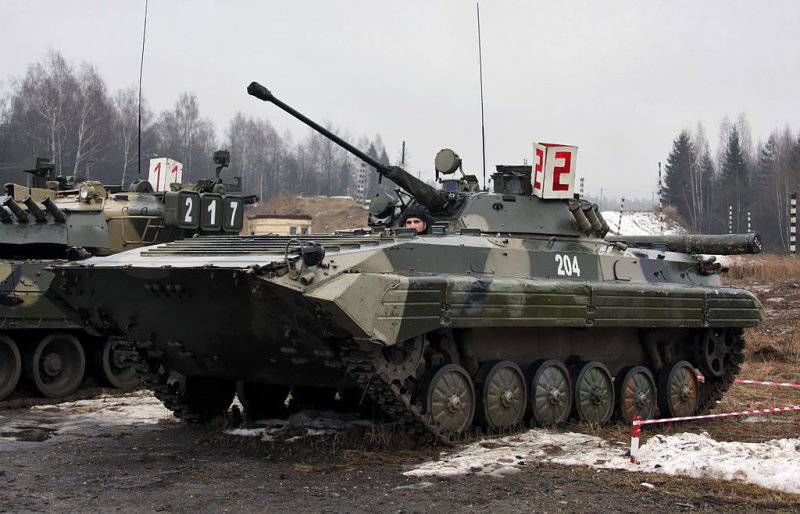 According to the ARMS-TASS news agency, the Kurganmashzavod enterprise recently completed work on two options for upgrading the infantry combat vehicle BMP-2. As follows from the available information, both projects imply the minimum possible change in the composition of equipment and weapons, with the help of which one can achieve a noticeable increase in the combat qualities of the vehicles. Sighting equipment (in both upgrades) and an armament complex have undergone major changes. The second option, among other things, differs from the base machine in the composition of the barrel armament, and also involves the installation of new sighting devices.

With reference to the representative of the defense industry, ARMS-TASS reports on the features of both projects. Thus, in the first version of the modernization of an infantry fighting vehicle, the installation of a new gunner-sight operator is envisaged. The device model B07K2 is equipped with a system for stabilizing the field of view in two planes, a thermal imaging channel and a laser rangefinder. The video signal from the new sight is transmitted to the monitor installed on the operator’s workplace. The commander’s workplace is proposed to equip the TKN-AI model with a new observation device. New sighting devices of the upgraded BMP-2 are integrated into the PNK-2-42 aiming complex. This system provides full control of all weapons from the workplace of the gunner operator, and also allows the commander of a combat vehicle to take over part of the gunner’s work. Using the PNK-2-42 complex, the crew of the BMP-2 can determine tank type targets at night at distances up to 3 km. Effective firing of anti-tank guided missiles is carried out in any conditions at a distance of 4 km.

During the modernization of the infantry fighting vehicle, Kurganmashzavod specialists suggested using new guided missiles. Instead of the 9K111 “Fagot” missile system or 9K113 “Competition” on the upgraded BMP-2, it is proposed to use the “Storm” / “Attack” 9К120. The new complex uses a semi-automatic missile guidance system, which greatly facilitates the work of the operator. The operator-gunner is only required to keep the target mark on the target. The calculation of all the necessary parameters and control of the rocket is carried out by automation. The nomenclature of the anti-tank missile complex 9K120 includes munitions with tandem cumulative, thermobaric and rod warheads. The latter is intended for the destruction of enemy aircraft.

There is information about the use in the project of modernization of some tools that increase the level of protection. On the front and side hull sheets, as well as on the bottom it is supposed to install additional reservations. In addition, it is possible to install anti-cumulation grids and active protection systems. Inside the troop compartment, it is proposed to install airborne seats that absorb part of the energy of a mine explosion. Thus, the complex of additional protection means, consisting of several elements, allows to improve the protection of the base machine both against bullets or fragments, and against explosive devices. However, with the use of all possible means of increasing the level of protection, the weight of the combat vehicle significantly increases, which can correspondingly affect mobility, the ability to overcome water obstacles by swimming, etc.

Depending on the wishes of the customer, the upgraded infantry fighting vehicle can be equipped with a new UTD-23T diesel engine with a capacity of 360 l. with. that should have a positive impact on its mobility. In addition, it is possible to update the suspension, which consists in installing new torsions and support rollers.

Both versions of the BMP-2 modernization, developed by Kurganmashzavod, retain the original set of barrel weapons. The 2А42 30 mm and 7,62 mm PKTM machine gun are stored in the turret of the vehicle. In this case, in one of the options for upgrading the combat vehicle, the installation of an additional weapons. In this case, the BMP-2 gets the gunner's sight BPK-3-42 and the remote-controlled installation with an AGS-17 automatic grenade launcher of the 30 mm caliber. A grenade launcher can improve the effectiveness of fire on manpower or unprotected enemy equipment. An interesting fact is that the second modernization project differs from the first only in the presence of the sight of another model and the turret with an automatic grenade launcher.

In two new projects for the modernization of the infantry fighting vehicle BMP-2, some technical solutions are used, which were already used in the previous versions of upgrading this type of armored vehicles. The prospects for newly created projects are not yet completely clear. Perhaps any of the countries operating the BMP-2 machines will show their interest in them and order the appropriate modernization of equipment.