October 18 2013
13
13 May 1946 saw the light of a decree of the Council of Ministers on the development of rocket weapons in the Soviet Union; in accordance with this decree, the design bureaus and the research institutes for rocket technology were created in the country, and the Kapustin Yar State Polygon functioning to this day was created. To deploy the work, it was entrusted to use the experience in developing Germany’s jet weapons as a backlog; tasks were set to restore technical documentation and samples of the Fau-2 long-range guided missile, as well as the Wasserfahl, Reintochter and Schmetterling anti-aircraft missiles. October 1 1947, the Kapustin Yar test site was fully prepared for the first test launches of ballistic missiles assembled in the USSR.


October 18 1947 of the year 10 47 minutes (Moscow time) was the first Soviet launch of a ballistic missile assembled on the basis of components and assemblies of the German A-4 rocket. It ended successfully, the rocket was able to climb to a height of 86 km., And reached the earth's surface at 247 km. from the launch site. This launch marked the beginning of a whole series of flight tests of the A-4 rocket. In October-November of the same year, 11 launches were carried out, of which 5 were recognized as completely successful. With an estimated flight range of 250 km., The missiles reached a range of 260-275 km. with lateral deviation to 5 km. Experts from Germany were involved in the tests of the first A-4 rockets assembled in the USSR, albeit in limited numbers. The cause of emergency launches was the failure of control systems, engines, leakage of fuel lines, as well as unsuccessful design solutions.

It is worth noting that the A-4 rocket has become a training for the first practitioners, and its launches in the fall of 1947 have become a good school for future work on the creation of our country's missile shield. The result of these tests was the development of the first generation of missile systems (P-1950, P-1) at the beginning of the 2s. It was the German V-2 rocket (A-4) that became the first stories an artificial object that made a suborbital space flight back in the first half of 1944. With the launch of captured and modified V-2 rockets, the Soviet and American space programs began. Even the first Chinese Dongfeng-1 ballistic missiles also began with the Soviet P-2 missiles, developed on the basis of the German Werner von Braun missile. 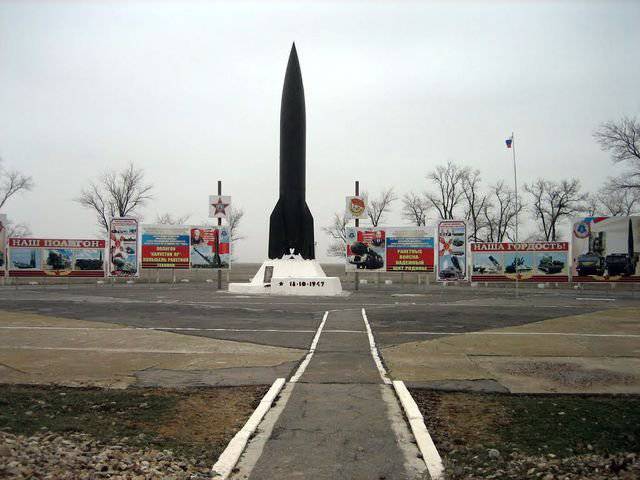 In the 20-30 of the last century, several states conducted experimental work and research in the field of development and design of rocket technologies. But thanks to experiments in the field of liquid-propellant rocket engines (LRE), as well as control systems, Germany turned out to be the leader in the development of ballistic missile technology, in which the Nazis came to power. The work of the German designer Werner von Braun allowed Germany to create and master the full technical production cycle, which was necessary for the production of the A-4 ballistic missile, which became widely known as V-2 (V-2).

Work on the development of this rocket was completed by June 1942, Germany conducted tests of missiles at a closed missile test site in Peenemünde. Large-scale production of ballistic missiles was carried out at the enterprises of the underground plant Mittelwerk, which was built in gypsum mines near the German city of Nordhausen. At these enterprises worked foreign workers, prisoners of concentration camps and prisoners of war, their activities were controlled by the SS and the Gestapo.

The A-4 single-stage ballistic missile consisted of 4-x compartments. Its nose was a warhead weighing about 1 tonnes, which was made of mild steel 6 mm thick and filled with an explosive - amatol. Under the warhead there was an instrument compartment in which, together with the apparatus, several steel cylinders filled with compressed nitrogen were housed. They were mainly used to increase the pressure in the fuel tank. Under the instrument was the fuel compartment - the heaviest and bulk part of the rocket. In the case of full refueling, it accounted for ¾ of the total weight of the A-4 rocket. The rocket "V-2" used liquid fuel components: liquefied oxygen (oxidizer) and ethyl alcohol (fuel). Upstairs was placed a tank with alcohol, from it through the center of the tank with oxygen was a pipeline that fed fuel to the combustion chamber. The space between the outer skin of the rocket and the fuel tanks, as well as the cavities between the tanks themselves, were filled with fiberglass. The A-4 rocket was filled with liquid oxygen immediately prior to launch, since the loss of oxygen due to evaporation was up to 2 kg. per minute. 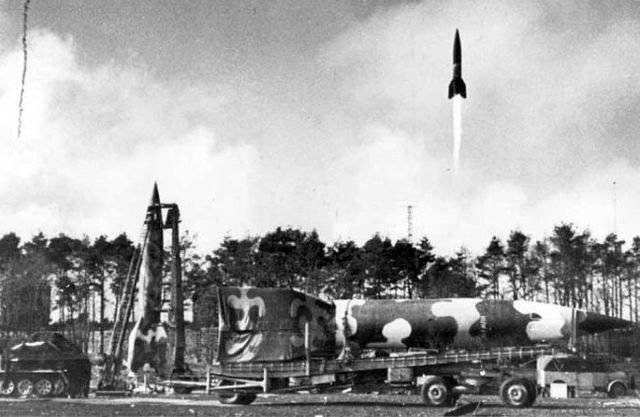 The total length of the rocket was 14,3 meters, the maximum case diameter was 1,65 meters, the launch weight of the rocket was 12,7 tons. Each rocket was assembled from more than 30 thousands of parts. The practical firing range of these missiles was 250 km. The total flight time to the target was up to 5 minutes, while in certain flight segments the rocket reached a speed of up to 1500 m / s.

For the first time, the Germans used their ballistic missiles to strike London and Paris in September 1944. The shelling pushed the United States, the USSR and the UK to search for materials that would allow them to recreate such weapon and determine all its performance characteristics. Before the capitulation of Hitler's Germany, German engineer Werner von Braun, together with his team of specialists, surrendered to American troops, and the plant where the V-2 missiles were launched was in the Allied occupation zone. At the same time, the Allies gave the territory under the control of the Soviet troops in exchange for West Berlin already through the 2 month. However, by that time, everything most valuable from factories, research and testing centers had already been removed, including several dozen ready-made rockets. Almost all the documentation and test equipment at that time were already in the United States.

Understanding the importance of German rocket development, a special group “The Shot” was created in Moscow, headed by well-known designer of rocket technology Sergey Korolev. The group was sent to Germany to gather information and build at least a few V-2 rockets for testing. The group arrived at the 1 rocket assembly plant on August 1945, when the plant near Nordhausen and all its equipment was already seriously damaged. Therefore, the task force had to deploy an active search for the people who worked on the creation of these missiles. Search carried out throughout the Soviet zone of occupation. 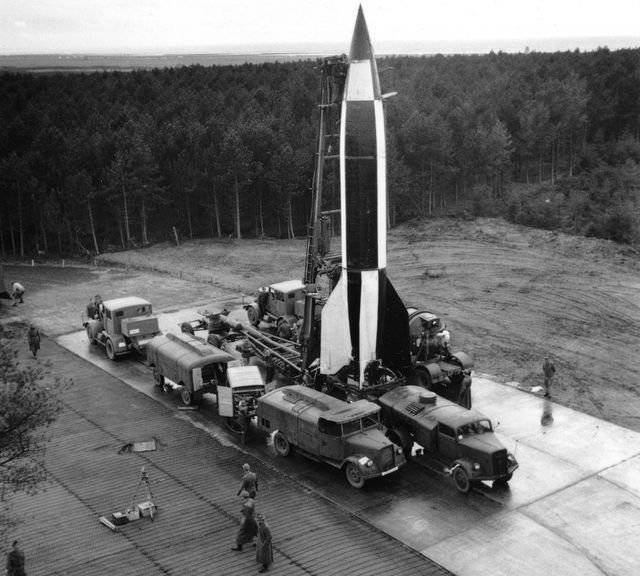 The Korolev group still managed to find a sufficient number of different materials in order to successfully reproduce the design of the German ballistic missile. On the territory of the Soviet zone of occupation of Germany, several enterprises were established for the restoration of missiles, control equipment, engines, and drawings. They were created together with the remaining German rocket specialists here.

As we already wrote earlier, in May 1946, the leadership of the USSR adopted a resolution on the development of rocket production in the country. According to this decree, the Nordhausen Institute was created in Germany under the control of the territory, in which, under the leadership of Sergei Korolev, the complete project of the long-range missile (AHD) A-4 was implemented, as well as proposals were developed for the development of missiles with longer range and special trains for the implementation of flight tests of missiles in the period before the preparation of the stationary test site. The same resolution stipulated the creation of a central target zone - the State Central Test Site of the USSR Ministry of Defense, which was intended to conduct flight tests of A-4 missiles and other future Soviet long-range missiles.

The assembly of A-4 rockets of the first series was carried out from the components captured as trophies - the so-called “H” items. Their assembly was carried out on German territory with the involvement of the forces and means of the Scientific Research Institute-88 and the Nordhausen Institute, and was led by Korolev himself. In parallel with this, in the Moscow Region in Podlipki, at the pilot plant of the Scientific Research Institute-88, assemblies of T-series missiles were assembled from units and units prepared in Germany. By the end of 1946, all the tasks that were confronted by Soviet specialists in East Germany were completed, they all returned home. Together with them, a number of German specialists went to the USSR along with their families. The Nordhausen Institute in March 1947 of the year completely ceased to exist. 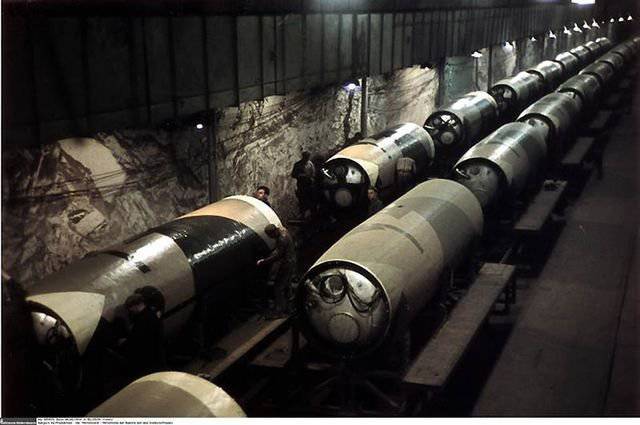 3 June 1947 of the year came out a new resolution of the USSR Council of Ministers, which determined the location of the GPC, for the missile technology site was selected desert area near the village of Kapustin Yar in the Astrakhan region. Already in August, military builders began arriving at the landfill, who were engaged in the erection of technical positions, launch complexes and measuring points with radio engineering systems. By October 1947, the test site was fully prepared for testing. On October 14, the first batch of A-4 rockets arrived here, some of which were assembled at Podlipkakh, and some in Germany.

Ctrl Enter
Noticed oshЫbku Highlight text and press. Ctrl + Enter
We are
Missile attack on Europe: myth or reality?65 years ago in the USSR, the first launch of a ballistic missile
13 comments
Information
Dear reader, to leave comments on the publication, you must to register.