October 14 2013
3
According to the publication Jane's Defense Weekly, in the first days of October, the South African company Denel Dynamics (a division of the Denel concern) tested its new development - the land version of the Umkhonto anti-aircraft missile system. For the past few years, the company's specialists have been working to finalize the ship's air defense system in accordance with the needs of the ground forces. The work resulted in the creation of a prototype of a promising land-based anti-aircraft complex, the first tests of which were carried out from 1 to 3 in October at the test site near Overberg. 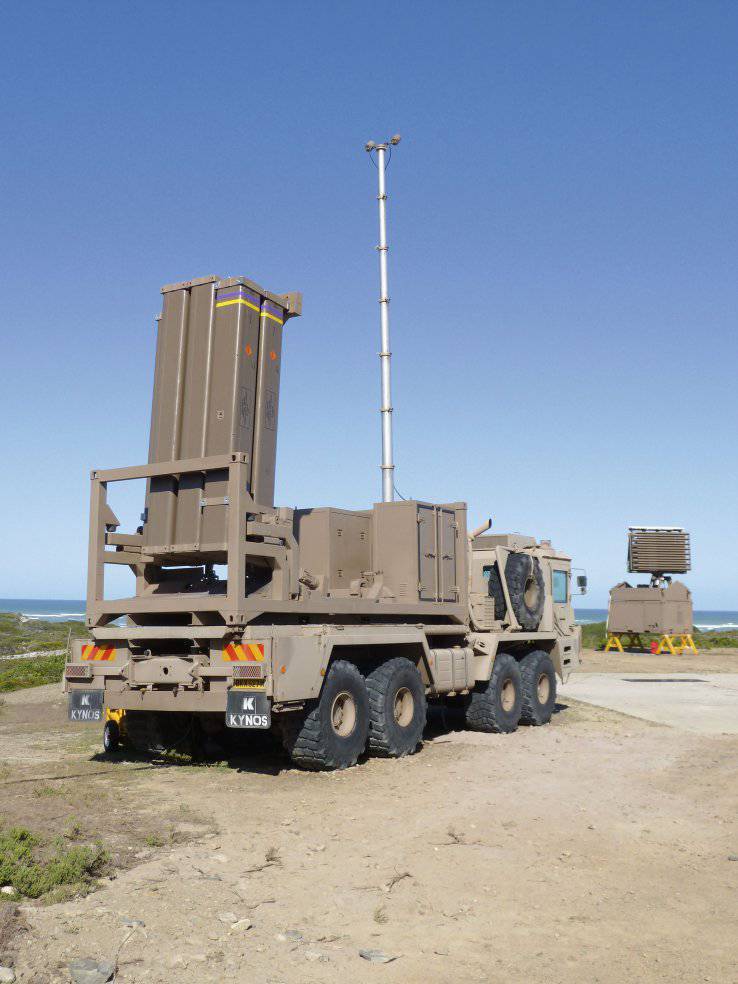 During the tests, the capabilities of the new self-propelled launcher were tested. Umkhonto-IR Block 2 anti-aircraft missiles were used as ammunition for testing. According to reports, the testers of the firm Denel Dynamics made three launches of missiles on radio-controlled targets BAE Systems LOCATS. Two targets were destroyed at a distance of about 15 kilometers from the launcher, the third - at the maximum possible distance of about 20 km. An interesting feature of all three launches of anti-aircraft missiles was the method of targeting. In the early stages of the rocket flight, control from the ground was applied over the radio channel. After approaching the target at a sufficient distance, the rocket turned on its own infrared homing heads. All three missile launches from the prototype ground launcher were considered successful.

In the tests of the ground-based anti-aircraft missile system, a self-propelled launcher based on a four-wheeled wheeled chassis was used, as well as a separate module with a radar station designed to search for targets and missile guidance on the cruise flight. The Reutech Radar Systems RSR-320 system is used as a universal radar of the anti-aircraft complex. It is noteworthy that during the tests the radar module was not mounted on any chassis and was located on the ground near the launcher. However, in this form, all elements of the prospective ground-based air defense system showed their capabilities in detecting and destroying air targets.

The creation of the land version of the Umkhonto anti-aircraft complex is carried out within the framework of the GBADS program, which should result in equipping the ground forces of South Africa with new air defense systems capable of effectively combating aviation and high-precision weapons of the enemy. A complex of a similar purpose, originally created to equip naval ships, was chosen as the basis for the new ground air defense system. The naval air defense system Umkhonto (translated from the Zulu language “Spear”) has been developed since 1993 as the main means of air defense of ships of the naval forces of South Africa. The development and preliminary testing of individual systems took more than ten years. The first successful interception of a training target took place only in 2005. Soon after, a new anti-aircraft complex was adopted. Currently, Umkhonto air defense systems are operated on four Valor-type South African frigates. In addition, Denel Dynamics was able to sell a number of Finnish complexes, where they are used on Hamina missile boats and Hämeenmaa mine loaders. In the near future, shipments of naval air defense systems to Algeria will begin. 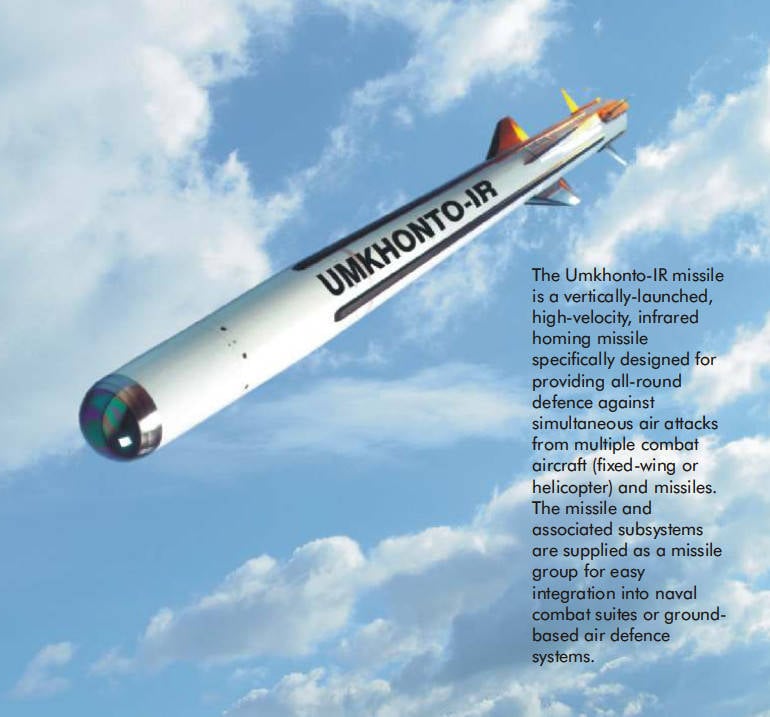 The choice of the existing ship-based complex as a basis for a promising land system has a number of advantages. First of all, there is no need to develop some systems, including a guided missile. All the necessary components and assemblies with minimal modifications or without them can be borrowed from the ship variant of the Umkhonto complex. Thus, the Umkhonto-IR Block 2 missiles used during the tests were created for the shipborne anti-aircraft complex and for their use in the land system no major changes are required.

Currently, there are several types of missiles for the Umkhonto complex. The basic version of an anti-aircraft guided missile is the Umkhonto-IR Block 1 (also known as Mk1) with an infrared homing head. The ammunition with a length of about 3,3 meters with a starting weight of 130 kg is equipped with a solid-fuel engine and is capable of accelerating to a speed of about twice the speed of sound. The characteristics of the basic version of the anti-aircraft missile allow it to hit targets at a distance of about 12 km and altitudes up to 8 km. Rocket Umkhonto-IR Block 1 has the original guidance system. The ammunition enters the intended location of the target using an inertial navigation system into which the necessary information is laid before launch. Then the infrared homing head turns on, which provides for the search, capture and hitting of a target. To destroy enemy aircraft, the 23-kilogram high-explosive type warhead is used.

The second modification of the rocket called Umkhonto-IR Block 2 (Mk2) was created in accordance with the requirements of the Finnish naval forces. The upgraded anti-aircraft missile received a new engine that provides a target hit range of at least 15 km. In addition, the interception height increased to 10 kilometers. The electronic equipment of the rocket has undergone a major upgrade, which made it possible to increase the reliability of the systems and, as a result, had a positive effect on the characteristics of the anti-aircraft complex. According to reports, work is currently being completed on the next modernization of the Umkhonto-IR rocket. Their result should be an additional increase in the maximum range and height of interception.

Some increase in the maximum range and altitude of the rocket is expected to be achieved during the Umkhonto-R project. This rocket will be heavier and larger than the base version, and will also receive a radar homing head. It is alleged that the Umkhonto-R will be able to deliver the warhead to a distance of 25 kilometers and an altitude of 12 kilometers. 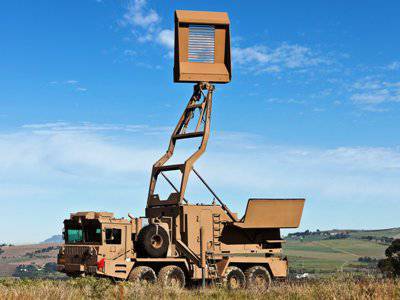 To detect targets and control missiles in the initial sections of the flight, the ground-based version of the Umkhonto air defense system currently uses the Reutech Radar Systems RSR-320 radar. This system is a further development of the Thutlwa ESR 220 station, now actively used in the South African armed forces. The new radar is able to find targets, including low-altitude, and determine their nationality using the system "friend or foe". The RSR-320 station is said to have some potential for countering electronic warfare.

The self-propelled launcher of the land complex was developed on the basis of the corresponding units of the ship-based air defense system. Combat vehicle on a wheeled chassis equipped with a vertical launcher, transported in a horizontal position. The use of a vertical launcher allowed to unify the equipment of the combat vehicle of the ground-based air defense missile system with the equipment of the ship system. In addition, such a launcher allowed to simplify some elements of the complex, as well as to facilitate and accelerate the launch of the missile at the target. After a vertical launch, the rocket turns in the direction of the target using the onboard thrust vector control system of the engine. Turning the launcher towards the target is not required.

Despite the fact that the development of the Umkhonto ground-based anti-aircraft missile system is being commissioned by the South African military department, the fate of this project is not completely clear. Recently, the South African military have experienced some difficulties with financing, which makes them save, including on promising projects. Because of this, work on the project of the new air defense system for the ground forces may be delayed or not at all lead to the expected results. In this regard, Denel Systems has to take into account not only the requirements of the main customer, represented by the Ministry of Defense of South Africa, but also the current trends in the international market of ground-based anti-aircraft systems. Now we are seriously considering the possibility of offering Umkhonto air defense systems to third countries.

The original ship version of the South African anti-aircraft complex has already been able to interest foreign customers in the person of Finland and Algeria. This may indicate some export prospects of the Umkhonto system. It is possible that the land version of this air defense system will also be of interest to some third countries. It is necessary to take into account the peculiarities of the international market of armaments and military equipment. To obtain export contracts, Denel Systems will have to make great efforts, since this sector of the market is already divided by several large companies from leading countries of the world.