In the US, upgraded the Russian carbine "Vepr"

October 11 2013
49
The love of some Americans for Kalashnikovs and another rifle armsdeveloped on its basis is known in principle. In the US, there are a sufficient number of fans of this brand, as evidenced by the growth in sales of Saiga carbines produced at Izhmash, which has now become part of the new Kalashnikov concern. American love for Russian small arms is not limited only to its purchase. In the states there are a sufficient number of craftsmen who are ready to upgrade Russian designs. One of the options for upgrading the Vepr self-loading carbine, created on the basis of a Kalashnikov light machine gun, was presented by Snake Hound Machine (SHM).


The Vepr self-loading carbine is the brainchild of conversion of the Russian military industry of the mid-10th century 90. The carbine was developed on the basis of a Kalashnikov light machine gun (PKK) and, thanks to the fame of this brand, was immediately loved by representatives of security structures and Russian hunters. The first batches of these carbines very quickly scattered across Russian private security companies and hunting clubs, this speed could be compared with the speed of a frightened saiga.

The carabiner retained the design of the Kalashnikov, as well as its type of automation. This is not unusual. When developing conversion weapons, the main principle is to preserve as many engineering features as possible of an army type. In addition, at that time there was already a clear example of the implementation of this scheme - Izhevsk carbine "Saiga". Therefore, at the plant "Hammer" in the city of Vyatskiye Polyany did not reinvent the wheel. In the Vepr self-loading carbine, as in the PKK, the principle of withdrawing a portion of the powder gases through a special side opening in the barrel wall is used for reloading. The main difference between the “Boar” and its combat ancestor is that the trigger mechanism makes it possible to fire only with single shots. In addition, the engineers of the Hammer had to change the shape of the horn, so that under no circumstances could a real combat store be inserted into the civilian version of the carbine. 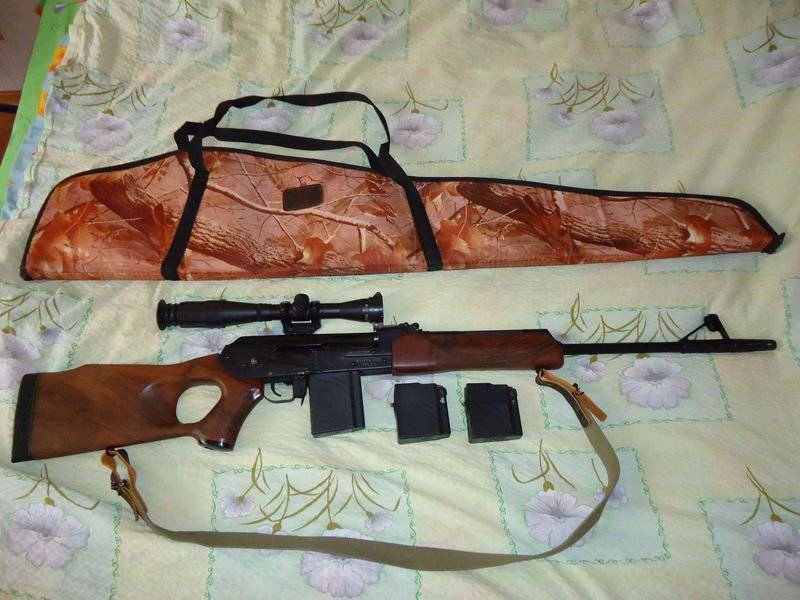 The forend and “Boar” butt were made of wood, while the receiver was missing - the forearm covers the trunk from above. Designers from Vyatskiye Polyan decided not to give up such a feature of the Kalashnikov machine gun as the pistol grip, which is combined with the butt. In other words, a hole was made in the butt for the thumb. This solution allowed the designers of the weapon not to carry the trigger, as well as its safety bracket, and, therefore, also eliminated the need to perform additional traction in the trigger mechanism.

In the Vepr carbine, as a rule, there were two types of magazines used: on 5 and on 10 cartridges. The carabiner was equipped with a sector sight, having a division step to 1000 meters. On top of the receiver there is a base for mounting an optical sight on it. According to a number of technical parameters, the Vepr carbine is similar to the Izhevsk Saiga, common roots affect it: a trigger mechanism, a base for an optical sight, and a magazine's capacity. At the same time, the “Boar” has a longer barrel and is heavier. It has its advantages: a long barrel reduces the muzzle flame, and a lot of weight reduces the recoil energy.

Thanks to the constant additions and improvements to the Vepr carbine, one can rightly be called one of the most successful conversion carbines presented by Russian industry. In addition, the constant competition with the Izhevsk Saiga family makes the Molot engineers not stand in one place, continuously working on improving their carbine. Knowing that AK abroad has been used for a long time to develop weapons for powerful rifle cartridges (for example, they did it in Yugoslavia and Israel), the designers from Vyatskiye Polyan based on their self-loading carbine Vepr chambered for 7,62 X39 cartridge also created an option for 7,62 chuck -mm type .308 "Winchester" (the hunting version of the NATO cartridge 7,62х51). The new version of the carbine received the appropriate name "Vepr-308". 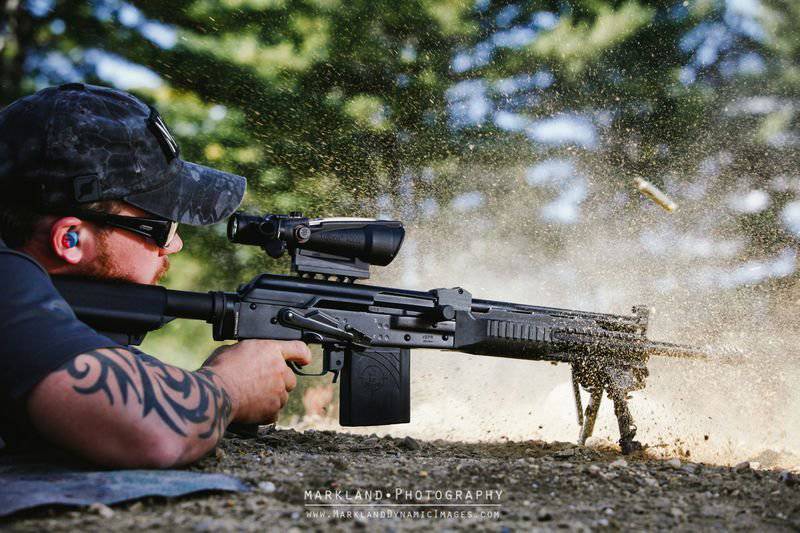 On the basis of the Vepr-308 carbine, the American company Snake Hound Machine (SHM) managed to make quite an interesting weapon. The company has set a goal to change the opinion of the progressive rifle society about the AK platform as a whole. To do this, the company's specialists gathered a group of skilled gunsmiths in love with small arms of the AK family, and developed something exciting based on the Vepr carbine.

For the development of their weapon masterpiece, the SHM designers chose a model for the .308 Winchester cartridge (7,62x51 mm of NATO). The choice is due to the fact that the developers wanted to create a maximum point rifle, a weapon with very high accuracy rates. Therefore, do not think that the Vepr carbine was just hung with slats and fittings, after which it received the status of a masterpiece. The task that was set by SHM was precisely to develop a rifle capable of accurately shooting using commercially available standard ammunition. 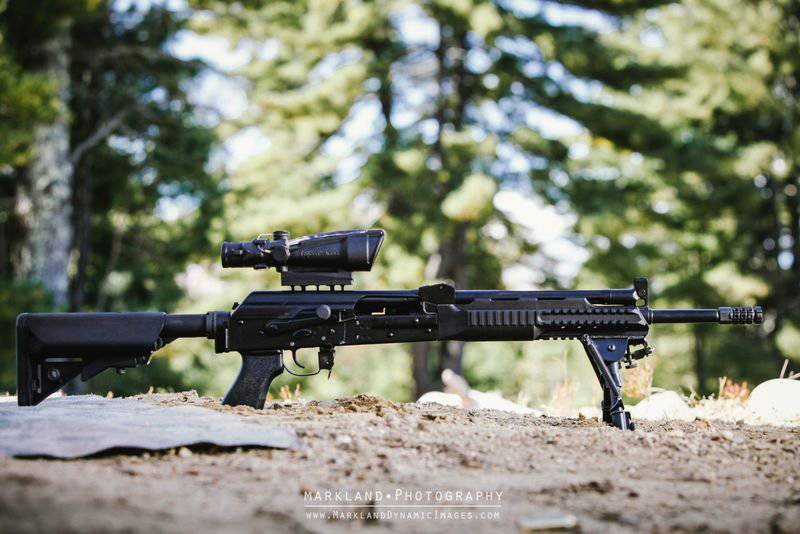 This is what one of the SHM 308 carbine developers says: “These carbines were modified from front sight to the butt by replacing trunnions, springs and pins, all undergone careful tuning and manual polishing in order to increase weapon reliability and minimize recoil. As a result, at medium distances experienced shooters can stack bullets in a circle with 1 MOA accuracy, using ordinary ammunition. ” Modified carbine "Vepr" is equipped with a muzzle compensator Ares Armor Effin-A, which is considered one of the most effective in its class and barrel length 419 mm.

The creators of the updated version of the rifle abandoned fairly widespread accessories in favor of the B5 Systems SOPMOD Bravo butt, the forearm from SGM Tactical, the guide for the Rifle Dynamics AK / AR butt and the pistol grip from US Palm. The company made a choice in favor of the best samples. At this modernization was not completed. The ejection window of the spent cartridges was subjected to changes, the standard safety lever lever for the Krebs Enhanced company was also replaced, which allows you to hold the SHM 308 carbine in the rearmost position. In addition, the bolt group was replaced to install a more convenient loader handle.

The American SHM 308 Vepr carbine is supplied to the consumer in versions with 5 or 10 rounds magazines in three standard versions Standard, TWS & Keymod and California Express. The first option is the cheapest and lightest, it has a light polymer forend and weighs 3,67 kg, in the TWS & Keymod version it is supplied to the consumer with the Krebs Vepr Keymod guide system, its weight increases to 4,36 kg. The Krebs Vepr Keymod is a modular system designed for attaching a variety of accessories to a carabiner, created by Vltor, and regular Picatinny rails can also be used with the carabiner. The California Express version has a magazine lock, this version is for the state of California. Depending on the version chosen, the price of the SHM 308 carbine on the American market ranges from $ 2200 to $ 2600.