Battle for India: US Electromagnetic Catapults must be countered by our 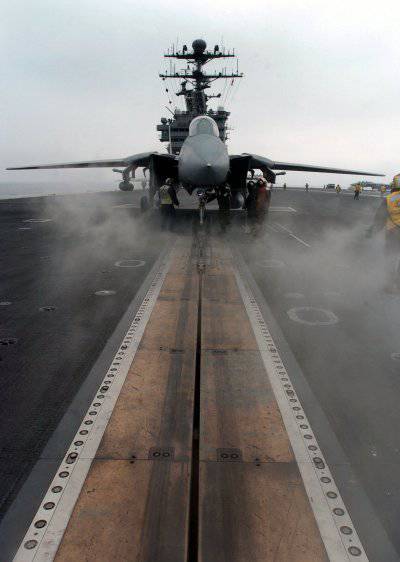 The United States continues its efforts to drive a wedge into Russian-Indian military cooperation. The Americans are ready to share the most advanced military technologies with India in order to take the place of Russia in the long-term modernization programs of the Indian armed forces in the future. On the one hand, this may help the Americans to improve the not very rosy situation in their advanced military programs. On the other hand, this will impede the development of Russian military programs, many of which rely on the closest cooperation with India.


At the end of September, Ashton Carter (First Deputy Secretary of Defense) visited India. He voiced some suggestions that might be of interest to Indians. So, he proposed the joint development of an electromagnetic catapult for aircraft carriers. About what this thing is and why it is so important - let's try to tell in more detail.

At present, the creation of an operating system for electromagnetic acceleration of aircraft is a technological “hi-tech”. Today, only some countries, such as the United States, Japan, China and Russia, are able to develop this area. And they are developing, with the exception of the United States, not really advertising such work. However, in the future it will have a huge impact on the development of armaments. And not only weapons. In principle, this method of launching has broad prospects. Acceleration of objects using electromagnetic forces is a quality alternative to take-off with the help of engines and fuel, which are located on the object itself. This method of launching will no doubt be used over time in aerospace systems (for example, NASA is working on the Maglifter program). And in the distant future, such systems will be used to deliver cargo from satellites of planets or from planets with a rarefied atmosphere. All this while, of course, looks more like fiction. However, the more such systems will develop for more “mundane” tasks, the more realistic their application in any other field will be. And as always, the military will become the engine of technical progress.

The first ship equipped with an electromagnetic catapult should be the American aircraft carrier Gerald R. Ford (CVN-78), the construction of which is still planned for 2016. Compared to a steam catapult, the electromagnetic series has indisputable advantages. It has a smaller volume and mass, uses less energy, allows you to adjust the acceleration in a wide range (which will give the opportunity to take off from the deck as small unmanned vehicles and large aircraft for various purposes weighing up to 45 tons), aircraft and pilots will experience less stress. And finally, in the long term, it will make the aircraft carrier the carrier of any apparatus, right up to strategic bombers and aerospace systems.

Now the United States is the only country that openly shows its operating ground test stand, which should later become a ship electromagnetic catapult (Electromagnetic Aircraft Launch System - EMALS). It is located at the NASC Test Center in Lakehurst, NY. New Jersey. The latest successful launch from the booth took place on November 18 2011 of the year. However, the refinement of this system to the mind comes with catastrophic delays and requires additional financial and intellectual injections (the United States is experiencing a serious shortage of qualified scientific personnel). Since 2008, EMALS costs have increased by 133,7%. But despite this, as of March 2013, the program was behind the schedule by more than two years. Each of the 2 – 3 test cycles ended in an unsuccessful result. It is already clear that even if Ford’s general ship systems do not require another redesign, and it will be ready for the 2016 year, it will come to sea trials without catapults.

This is one of the main reasons for the American proposal. Americans find it very difficult to maintain the status of a military and technological leader alone. Habitual geopolitical partners / satellites are either not capable of much or are experiencing similar financial and intellectual difficulties. And India has a good financial base and actively expanding scientific potential. It strengthens its defense capability and needs modern weapons. So why not use all this for your own good? We already wrote about the visit to India by US Secretary of State John Kerry in June. Then the head of the American foreign policy department tried to tempt India with the so-called “evolution of the regional architecture of Asia”. The current visit of Ashton Carter was a continuation of seduction. But already with a specific bait.

By the way. One of the baits did not work. India did not refuse to create its own "Nag" anti-tank guided missile (ATGM), despite the fact that the Americans offered to produce the American Javelin ATGM jointly.

The second reason for the unusually generous offer of the Americans is that military-technical cooperation with India strengthens Russia. The US is jealous about how Russia is using India’s financial and scientific potential for joint defense programs. Here you can remember the fifth generation PAK FA aircraft (and its Indian version of FGFA), the joint program for Yakhont / BrahMos supersonic missiles, the program for hypersonic weapons, the creation of a common medium military transport aircraft MRTA, and much more. And besides, almost the entire combat-ready Indian fleet is built with or with our participation. This not only strengthened the military potential of India, but also allowed Russia to restore and develop its shipbuilding industry. And the modernization of the Admiral Gorshkov aircraft carrier to the full-fledged Vikramaditya aircraft carrier - in general, gave Russia the experience of aircraft carrier creation lost after the collapse of the Union. Together we will implement those defense programs that we would not have mastered alone.

Here is another domestic defense project that has been experiencing implementation difficulties for a long time, has a chance to get a good push from the Indian customer. We are talking about non-nuclear submarines of the 677 "Lada" project. The main boat of this project B-585 "St. Petersburg" for objective reasons (which we described in detail) could not confirm the stated characteristics. Completely all the flaws will be corrected only on the third boat of this project. But the export version of this boat (677E project, otherwise called Amur-1650) participates in the Indian tender for the construction and supply of six combat units for 12 billion dollars. There are competitors for the Rubin Design Bureau and our boats. French company DCNS with submarines type Scorpène. Three Frenchmen are already building three “Scorpions” for India from 2006 onwards, and are likely to complete the first 10 after years of laying. Spanish Navantia offers S-80 type submarines. For itself, Spain has ordered four such boats, the first of which will receive no earlier than 2015 of the year ... unless, of course, it is possible to correct design errors (the excess weight, which will be 75 – 100 tons). German HDW has tendered excellent boats Type 212 / 214, which have already been mastered in the series and have proven themselves well.

All three of our competitors have air-independent power plants (VNEU). And for the “Cupid-1650” and “LAD”, intended for our Navy, such an installation has yet to be created. And the Indian tender is very helpful in speeding up this work. Especially considering the fact that the probability of choosing our boats is very high. Recently, the Indian Ministry of Defense even changed the requirements for new ships, adding the deployment of Russian-Indian missiles BrahMos on board as a condition. Naturally, only we can fulfill this requirement. That is, successful cooperation in another project will help to win this tender.

The Americans also want to see their cooperation with India in approximately the same way. For example, when they proposed jointly developing an electromagnetic catapult, the Americans immediately stipulated the need to freeze the design of a new aircraft carrier (meaning INS Vishal, the construction of which will begin no earlier than 2020). Naturally, the project can only be changed in such a way that, instead of Russian aircraft, only American aircraft can take off. This is what a strategic partnership looks like, in which the USA dreams of taking Russia's place. In the near future, recall, India will receive from us the Vikramaditya aircraft carrier, whose air group consists of MiG-29K aircraft. The Wikrant aircraft carrier, whose hull was launched two months ago, is also being created with the participation of our specialists. According to Viktor Komardin (Deputy General Director of Rosoboronexport), the responsibility of Russian specialists includes everything related to aviation and aviation equipment. Naturally, the aircraft aboard the Vikrant will also be ours. And the third Indian aircraft carrier, which will become much larger, will also be largely a joint brainchild. Unless, of course, the Americans intervene in its design.

I must say that the Indians will have to think hard about the American proposal for electromagnetic catapults. Back in 2010, when Admiral Nirmal Kumar Verma outlined the appearance of a third Indian aircraft carrier, he said that Vishal would have to receive heavier airplanes (long-range radar detection and air refueling) in addition to fighters. And without catapults it is almost impossible.

In addition, the creation of electromagnetic catapults is necessary for us. Moreover, for exactly the same reasons as the Indians and Americans, as well as the Chinese and Japanese, who are developing their own programs for the construction of aircraft carriers and creating their own electromagnetic catapults. The presence of electromagnetic catapults and long-range radar watch aircraft (DRLD) is a mandatory requirement fleet to a promising Russian aircraft carrier (the project bears the general name IAC - a marine aviation complex). Without this, by and large, such a ship would not be a qualitative step forward that could seriously increase our sea power. But since the amount of upcoming work is frighteningly large, we prefer to postpone the detailed study of the project until later (until 2025).

But you could do as the Americans - to offer India a joint development. Then the American tempting offer, which threatens us with damage in many related areas, would be devoid of any meaning. And a full-fledged aircraft carrier and we, and the Indians would have received much earlier. In the end, this is the work that will be very difficult to master one by one.