October 8 2013
55
When planning a military operation against Syria, the US military expected to actively use aircraft AWACS (Airborne Warning and Control System), for example Boeing E-3 Sentry. These machines are very well proven during the fighting in Iraq, Afghanistan and other hot spots of the planet. Aircraft of this type are becoming increasingly important in modern armies. Currently in service with the Russian Air Force is 22 aircraft ARLOU A-50, which were built in Soviet times. Also, the Russian Defense Ministry was transferred 2 modernized aircraft A-50U, the delivery of the third machine is scheduled to be completed before the end of 2013 year. In addition, in the 2013 year, the concern "Vega" expects to conclude a contract for the supply of military equipment for the 4-th such aircraft, which is already in the assembly.


According to Vartan Shakhgedanov, deputy general designer of the Vega concern, the main difference between A-50U aircraft and conventional A-50s is the replacement of analog equipment with digital equipment, which increases the aircraft’s ability to detect and track targets, as well as direct various strike weapons. The use of long-range radar detection and control aircraft allows you to quickly increase the radar field in a short time, which in Russia today is not continuous, but zonal. With an increase in the intensity of combat training, these aircraft are increasingly being used to solve problems according to their purpose. For example, from 2011 to the present, more than 150 combat training missions and special missions were carried out by Russian AWACS and Russian aircraft, the planes completed over 1000 fighter and strike guidance aviation for ground, air and surface targets. The A-50 aircraft, which was developed in the late 70s, still has not lost its significance.

The fleet of Russian aircraft DRLOU is gradually being updated due to the commissioning of modernized A-50U machines equipped with modern radio-technical complexes. Thanks to this version, the car has found a second youth. Due to the use of modern technologies and the replacement of part of the special equipment, it was possible to reduce the mass of the complex, which, in turn, caused an increase in the flight range and time of the aircraft on-duty. Automated workplaces of airborne combat control officers and other operators were equipped with modern LCD monitors that make it possible to visually display the air situation in the combat area. Allow you to quickly respond to all changes, as well as to have on hand all the reference data for effective work. 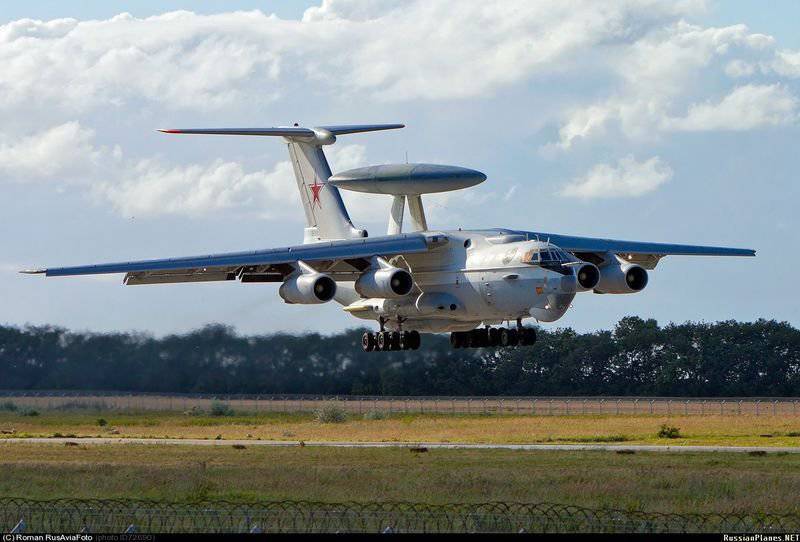 Modernization allowed to increase the capabilities of the aircraft. The range of detection of air and sea targets increased, the number of simultaneously accompanied air (surface) objects, the output and processing speed of all information increased, and the possibility of automated guidance of fighters to air targets over the entire range of speeds and altitudes in the presence of interference was realized.

The production of aircraft A-50 was engaged and continues to be engaged in the Taganrog Aviation Scientific-Technical Complex (TANTK) named after. Beriev. The aircraft is built on the basis of IL-76MD and is able to fly for removal in 7,5 thousands of kilometers at speeds up to 800 km / h. It is able to detect and classify various types of air and ground targets, while simultaneously tracking up to 300 objects. Currently TANTK them. Beriev together with the concern "Vega" are engaged in the release of the aircraft in version A-50U. This is a variant of deep modernization of the aircraft with the installation of an improved radar complex "Bumblebee-M" and "Bumblebee-2". Compared with the basic version, it provides the capture and tracking of targets at a greater distance.

The capabilities of the AWACS A-50U aircraft make it possible to detect aerial targets such as a bomber at a distance of up to 650 km, fighters - 300 km, ground targets of the type tank columns - 250 km. It is assumed that the emergence of a new aircraft AWACS A-100 "Premier" will double these figures. On the new aircraft, it is planned to use a digital navigation system, as well as a digital control system with a “glass” cockpit. The aircraft will be built on the basis of IL-76MD-90A with engines PS-90A-76, also known as IL-476. It is reported that its antenna complex will be built on the basis of an antenna with an active phased array (AFAR). The first flight of the aircraft should take place before the onset of 2017. 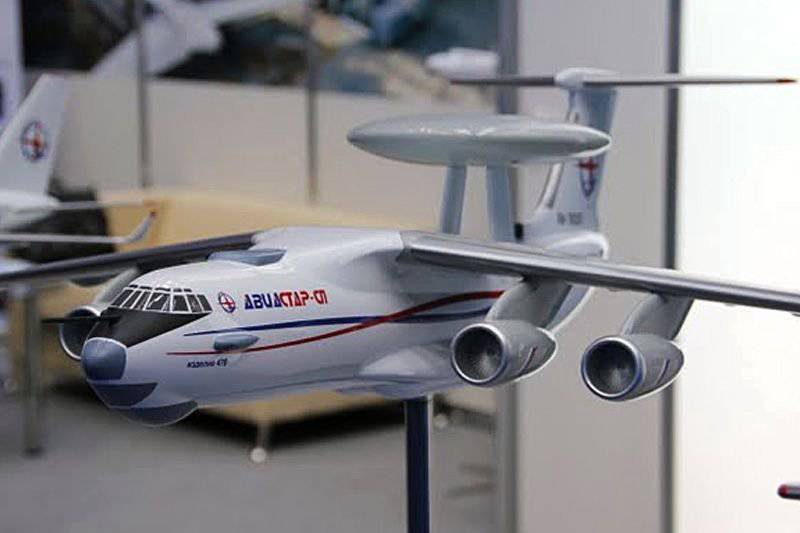 The A-100, built on the basis of the IL-76-MD-90A, will be a fundamentally new aircraft, which should enter service with the Russian Air Force. The aircraft will be equipped with a multifunctional radio-technical complex, which will allow to solve operational-tactical and strategic tasks in the field of conducting reconnaissance and control of aircraft of the Armed Forces and arms of forces (troops). The basis of its development were derived systemic issues of increasing combat effectiveness and unconditional solution of tasks both in peacetime and in a threatened period, and during the conduct of hostilities. Separately, we can highlight the fact that the main design and conceptual decisions were made taking into account the real possibilities of modern computing, the latest achievements in the field of theories of optimal control, identification, filtering, and space-time signal processing.

Aircraft A-100 "Premier" is designed to detect, identify, classify, determine the coordinates and tracking of air, surface and ground targets and non-strategic rocket means of attack of a potential enemy; the transfer of intelligence information to control centers of different species and different levels, including targeting to control points of the ship and ground-borne air defense systems; control of all types of manned aircraft fighter, bomber, assault and special aircraft, as well as unmanned aerial vehicles.

At the same time, the DRLOU A-100 aircraft is a logical continuation of its predecessor - A-50U. This machine will be able to solve the whole range of tasks standard for DRLOiU aircraft, including ground guidance and crew management, but also use various types of UAVs. Currently, the Air Force is working on the detailed development of the full range of use of this aircraft after the 2020-2030 of the year. 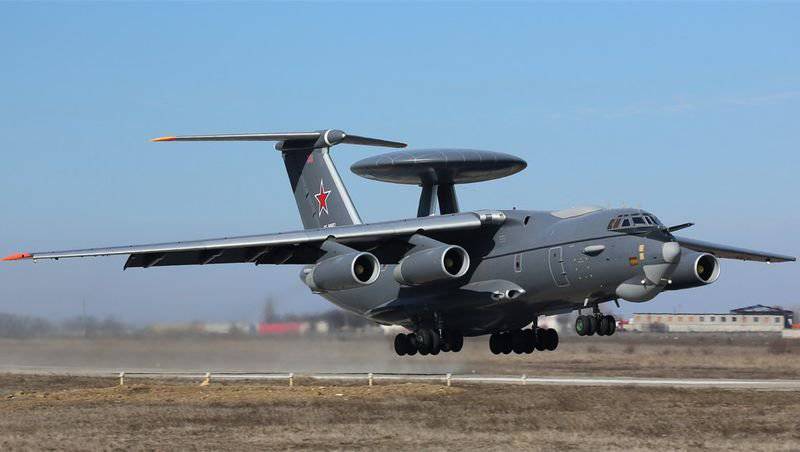 Compared with its predecessor A-50, the A-100 “Premier” should increase the number of simultaneously accompanied objects (targets), the number of simultaneously controlled fighters, the target detection range should increase, the detection height of air objects should increase by an order of magnitude. In addition, capabilities will be added to control ground-based weapons, track various ground targets and provide over-the-horizon shooting. The implementation of these capabilities will significantly increase the effectiveness of medium-range and long-range air defense systems of the Ground Forces, Navy and Air Force, as well as providing information to all levels of the command and control unit of the Russian Armed Forces.

It can be argued that, while maintaining continuity, the new Russian DRLOU A-100 aircraft will become a fundamentally new air system both in complexity and number of combat missions to be solved, and in terms of its tactical and technical characteristics. The use of such airplanes will significantly increase the effectiveness of combat operations by all branches of troops (forces). It also seems obvious that for the broadest use of the potential incorporated in the aircraft, it will be necessary to further improve the techniques and methods for solving operational-tactical tasks with detailed elaboration of the relevant plans.