October 7 2013
59
The topic of space exploration in the USSR has always been top-secret. Fortunately, today the veil of mystery is lifted ... For example, such mystery was soaring over the works of outstanding designer Vladimir Chelomey. His name is mainly associated with the development of the legendary Proton launch vehicle. For 22 years, this booster rocket was the most powerful in the Soviet Union, which put tons of payload into 20 orbit. Even today, despite the presence of a more powerful rocket “Energy”, “Proton” remains the space transport in the implementation of the present and future Russian space programs. In 2001, the Proton-M rocket, which is a modification of the Proton, developed by Academician V. Chelomey, went to the first flight. 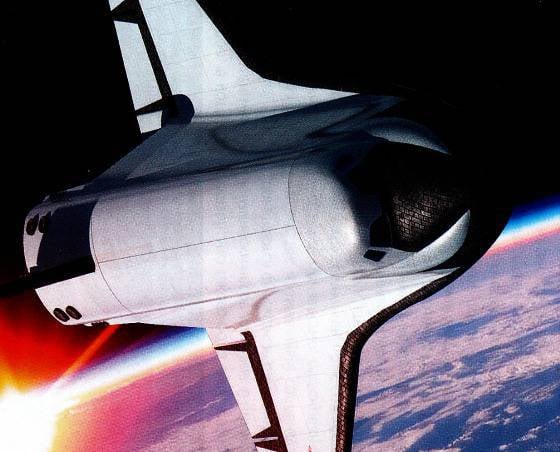 However, there was another direction of the designer’s activity, which only a very narrow circle of specialists knew about. This direction is associated with the development of its own version of the space shuttle.

Vladimir Nikolaevich never stopped doing design rocketplanes. In 1960, Korolev SP, citing successful flights of ICBMs, proposed to close the design of cruise missiles in the USSR. Leonid Brezhnev, who was in charge of defense equipment, immediately supported him, and the subject matter was covered.

However, in OKB Chelomey V.N. the topic continued, to the logical end was brought almost underground. In 1960-ies, the project of the Chelomey Design Bureau (OKB-52) began the project of a promising cruise orbital reusable manned spacecraft with launch on the Proton launch vehicle. During these years, MP-1, M-12, Р-1 and Р-2 rocket planes were developed. As a base for the project, groundwork was used on the topic of the Tsybin space rocket flight for the Vostok launch vehicle. Already 21 of March 1963 from the Baikonur cosmodrome on the P-12 rocket a suborbital launch of the prototype of the P-1 lightweight spacecraft was carried out. At an altitude of 200 km, the rocket glider separated from the carrier and, with the help of onboard engines, gained altitude 400 km, after which it began to descend. The R-1 rocket entered the Earth’s atmosphere at a speed of 4 km / s, flew 1900 km and landed with a parachute.

In 1964, the appearance of the LKS was already really visible. The pilot of this cigar-shaped machine with varying circular tail feathering and side keels with appropriate equipment could perform urgent detailed reconnaissance or interception of targets. However, the work was not allowed to complete.

After the events of 1964, when the verification commission appeared in OKB-52 with verification, promising projects were forgotten. Lightweight spacecraft project suspended. The reason for the shutdown was the concentration of resources on the lunar program of the USSR and the creation of the Soyuz spacecraft, as well as the Spiral aerospace system. In 1966, the materials on this development were transferred to the Mikoyan Design Bureau. 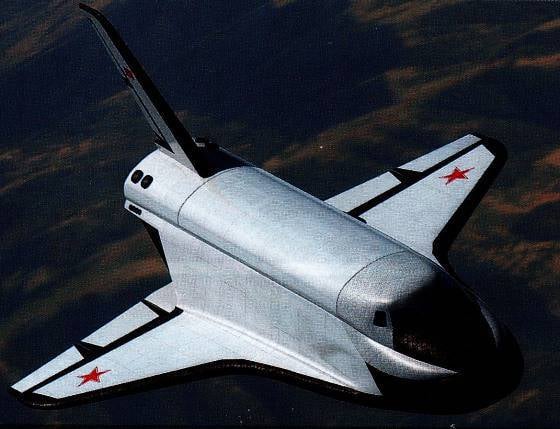 In 1976, in the USSR, a government decision was made to create the MTCS, which largely duplicates what was developed in the USA: the Soviet party nomenclature by that time begins to perceive the West as a reference. For this program, it was necessary to develop an Energia rocket carrier (general designer Glushko) and the Buran spacecraft (general designer Lozino-Lozinsky).

Chelomey was also invited to participate in the program. However, the designer refused because he was a supporter of asymmetric solutions that allow you to achieve the desired results with less effort. He argued that the development of the MTCS for the USSR was economically unprofitable, and proposed the design of a light space aircraft launched by the Proton launch vehicle. As a result, the estimate for the development of the transport-space system was reduced by an order of magnitude. At the same time design work was resumed.

After a captious analysis of various variants of Chelomey, a project was selected in which the LKS would put tons of payload into 4-5 orbit. The aircraft provided for the maximum use of the results of flight design tests of 1960’s rocket-glider models.

For launching the LKS into orbit, it was proposed to use the Proton K (“UR500K”) ready-made launch vehicle. The use of the finished booster significantly reduced the time and cost of creating the LSK. Externally, the device is very reminiscent of the "Buran" in miniature. However, their aerodynamic and operational characteristics were very similar. To speed up the creation of an aircraft, it was proposed to use waste systems, units and components with the OVS Almaz and TKS. The flight of the LKS in the manned variant was supposed to last up to 10 days and in the unmanned - 1 year. The mass of the 19-meter light spacecraft was 20 tons with a payload of 4 tons. The crew LKS consisted of two people.

A lightweight space plane was originally designed as a multipurpose device that allows you to solve a wide range of tasks in the interests of the national economy, science and defense. It was also supposed to work out the technology of the flight of a space plane. The lightweight space plane was intended for the transportation of useful space cargoes, as well as for assembling orbital settlements, like the Soviet "Peace" and the American International Space Station, or for hitting major strategic points and neutralizing intercontinental ballistic missiles. 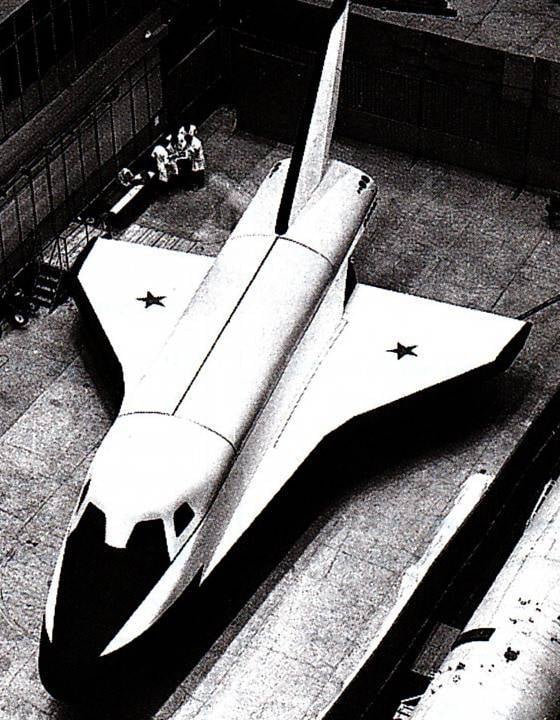 The photo shows a full-scale mock-up of the Chelomey lightweight space plane. One of the monuments of the Soviet cosmonautics was hastily dismantled and destroyed in order to preserve secrecy.

A special feature of a lightweight space plane was the use of a heat-shielding coating used on the reusable return vehicle of the Almaz complex. This thermal protection provided one hundred return cycles from outer space. In addition, it was much cheaper and more reliable than the Burana and Space Shuttle tiles. Also from "Almaz" were supposed to "migrate" the life support system of the crew, management, and the like.

Unfortunately, there was no customer for civil transport among our departments and ministries, then Chelomei V.N. launched a program that Velikhov EP, the world-famous academician, called "Star Wars". The project was very bold and stunning. Those were released. proposals for the LKS in 25 volumes, as well as a technical proposal for the creation of space fleet from light space planes in 15 volumes. It was proposed to create the LKS within four years. These proposals of support were not found by the leadership of the Ministry of Defense and the industry. Despite this, Chelomey V.N. on an initiative basis developed a conceptual design of a space plane. The main focus of the project was on the military use of a light space aircraft. The main task was the introduction of a laser into near-Earth orbit. weapons to prevent nuclear attack. At the same time, 360 orbital planes with laser weapons on board had to be put into orbit. With this "rate of fire" were going to bring to the 90 launches "Protons" in the year. Naturally, to ensure the duty of light spacecraft in orbit for a long time, unmanned aerial vehicles had to be launched. At the same time, in the event that the level of military confrontation was reduced to a safe level, laser weapons returned to Earth. In fact, this proposal was a “chelemeevsky” response to the American PIO (strategic defense initiative).

In the year 1980, based on the results of the preliminary design, a full-size mock-up of a light space aircraft was made.

Such a proposal, of course, interested both the military and the leaders of the USSR, who were concerned about the deployment of the PIO. In September, 1983 created a state commission to protect the project of a light spacecraft. The commission included representatives of the Ministry of Defense, electronic industry, general engineering, Aleksandrov AP, President of the USSR Academy of Sciences, and others. The main opponent in the defense was Kisunko G.V., the general designer of missile defense systems, since the creation of a fleet of light space aircraft with laser weapons devalued ground-based anti-missile defenses. In essence, Kisunko defended his own narrow departmental interests. Nevertheless, he was able to attract the military to his side, and the government commission decided to stop work on the LKS.

Further work was discontinued in favor of the reusable transport space system Energia-Buran, and the KB forces were sent to work on the space station complex of the Almaz spacecraft. In the interests of secrecy, the manufactured layout LKS was disassembled, and the technical documentation was classified. To date, several photographs have been preserved of the layout of Chelomey light spacecraft.

Perhaps, if the work on the light spacecraft were not covered, now in Russia there would be a mobile and relatively cheap reusable transport ship that the fate of Buran would not have suffered (it’s laid up). However, it is difficult to imagine that Glushko VP allowed to use LKS Chelomey to supply their orbital stations.

Ctrl Enter
Noticed oshЫbku Highlight text and press. Ctrl + Enter
We are
Space in open access"Proton-M" waiting for serious competition with the American rocket "Falcon 9"
59 comments
Information
Dear reader, to leave comments on the publication, you must to register.