27 September 2013
159
A few days before the start of the exhibition Russian Arms Expo-2013, a photo of one of the samples of armored vehicles scheduled for the show was released to free access. Unfortunately for the public interested, the armored vehicle in a single photo was covered with a tarpaulin, which could only consider the wheeled chassis, as well as the approximate hull and tower lines. The appearance of this photo led to a lot of controversy. The main issue discussed by experts and amateurs of military equipment was the model of the new mysterious model. The version that the domestic defense industry is ready to show at the RAE-2013 exhibition the first prototype of a wheeled armored personnel carrier developed under the Boomerang program quickly gained popularity. 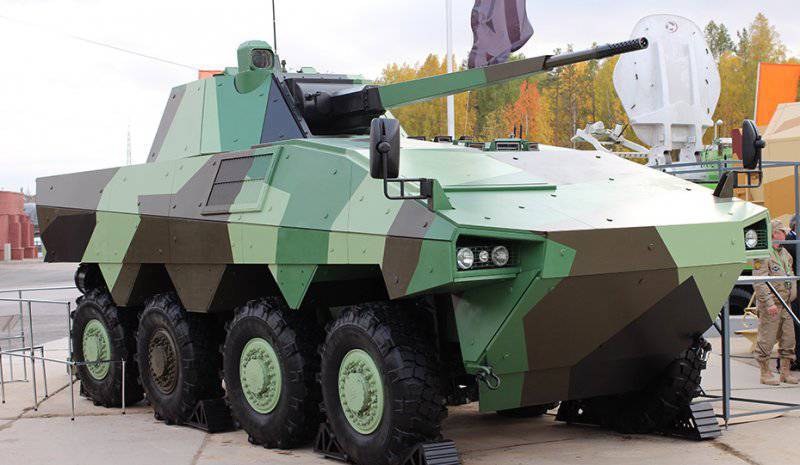 However, the version of the first show "Boomerang" has been criticized. Due to the characteristic appearance of several units of the machine, a different version appeared, according to which the sample is a fruit of international cooperation. Shortly after the appearance of the first image, several photos appeared in which a prototype of the new armored vehicle was captured in the workshop of one of the Russian defense enterprises. A number of nuances, noticeable on the new photos, became the reason for the next disputes. Finally, on the first day of the RAE-2013 exhibition, work on a new project was officially announced. As it turned out, the armored car really has nothing to do with the Boomerang wheeled platform.

The heavy-duty infantry fighting vehicle presented at the Russian Arms Expo-2013 exhibition is the first result of a joint project between Russia and France. The project of a promising BMP is being created by the efforts of four organizations: from the Russian side, Uralvagonzavod and TsNII Burevestnik participate in it, and France is represented by Renault Trucks Defense and Nexter Systems. Among the organizations participating in the project, the tasks of creating certain elements of the new combat vehicle are distributed. At the same time at the moment in the project are widely used some of the developments borrowed from already existing developments.

According to the general director of Uralvagonzavod, I. Sienko, Russian and French companies participate in the project on equal terms and in equal proportion. For example, Renault Trucks Defense and Nexter Systems provided a power plant, transmission, fire control system and a number of other units of the built prototype. The Russian side, in turn, took over the main work on the creation of a set of weapons and the assembly of the finished machine. At present, the heavy BMP, shown on the RAE-2013, is only a demonstrator of the concept of a promising machine of this class. In the near future, the project may undergo major changes in various aspects of it. 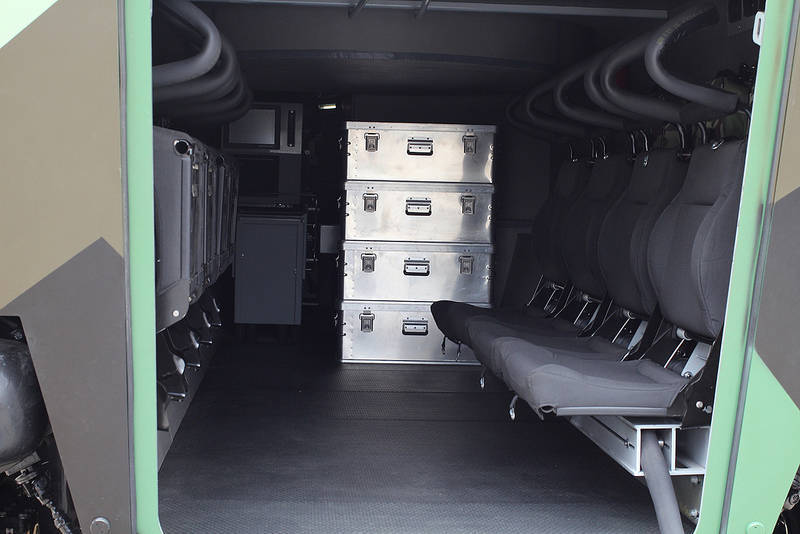 The chassis of the prototype heavy BMP is made on the basis of the French car VBCI, which is why the concept demonstrator is similar to it in a number of ways. Prospective BMP, like VBCI, has an engine compartment in the front of the hull, at the starboard side. Next to it is the office of management with the workplace of the driver. In the middle part of the armored corps there is a shoulder strap for a tower or a combat module with the necessary weapons. All the aft hull is given under a spacious troop compartment.

The available information on the VBCI BMP hull and the declared characteristics of the demonstrator car suggest that the 5 level ballistic protection according to the NATO standard STANAG 4569 is achieved by installing additional armored modules. In addition, the machine can be equipped with protivokumulyativnymi screens. The possibility of movement with punched tires, the ability to install an active protection system, the presence of a warning system for laser irradiation, etc.

At the moment, it is planned to equip the promising heavy BMP with a Renault diesel engine of 600 horsepower. and automatic transmission. With such a power plant, the 8x8 wheelchair machine is said to be able to accelerate to 100 km / h and travel at a single fuel up to 750 kilometers. The value of the maximum speed of the machine, obviously, may vary depending on its configuration. According to official data, the maximum combat mass of a heavy wheeled BMP can reach 32 tons. It is unlikely that a 600-strong engine is able to accelerate a car of such a weight to the specified speed. In addition, at the maximum level of protection, a promising machine is likely to lose the ability to cross water obstacles.

In accordance with the latest trends in the development of armored vehicles, the promising Russian-French BMP is made according to a modular principle. Load capacity at the level of 7 tons and landing compartment volume of more than 10 cube. meters allow you to use the chassis of an infantry fighting vehicle as a base for other equipment. For example, in the promotional materials presented at the RAE-2013 exhibition, there are images of the following machines. Heavy armored personnel carrier with a remotely controlled combat module and 12,7-mm machine gun, heavy wheeled BMP (this version of the machine is presented as a full-size model), anti-aircraft artillery complex with 57-mm automatic cannon, self-propelled artillery 120 mm and also auxiliary machines: armored repair and evacuation, command and staff, engineering and sanitary. Having a single chassis, all these machines must differ from each other by the set of target equipment. 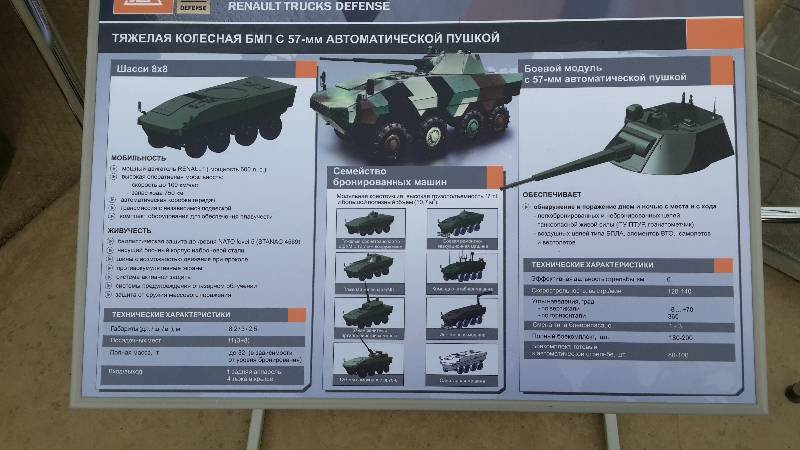 Option heavy BMP, presented at the exhibition, intended to carry eight soldiers with equipment and weapons. For them, in the rear of the machine seats are installed. Embarkation and disembarkation is made through the aft ramp and two hatches in the roof. The placement of the assault seats and the layout of the armored hull can speak about the measures taken to increase the resistance of the vehicle to mines explosions. Own crew prospective BMP consists of three people.

The concept demonstrator is equipped with a new combat module created at the Petrel Research Institute. The main armament of this module is the automatic gun of the caliber 57 mm, which is the development of the C-60 anti-aircraft gun. Such weapons can be used to destroy lightly armored and unprotected vehicles, manpower, some types of fortifications and aircraft. The effective firing range is declared at 6 kilometers. The rate of fire - 120-140 shots per minute. The systems of the new combat module allow you to direct the gun in a vertical plane in the range of angles from -8 ° to + 70 °. Horizontal guidance is circular, performed by rotating the entire tower. Automation of the combat module provides the use of various types of shells, it takes from one to three seconds to change the type of ammunition. Inside the combat module there is a place to place 180-200 projectiles caliber 57 millimeters. Of these, no more than a hundred are in the layouts of the automatic loader. As an additional weapon, a promising infantry fighting vehicle can use a rifle-caliber machine gun coupled to a cannon.

An interesting feature of the new combat module, developed by the Petrel Research Institute, is the original gun cover. A construction similar to a truncated pyramid begins at the gun mask and ends at a certain distance from the muzzle brake. The reasons for the appearance of this detail are not well understood. Perhaps among the goals of the joint Russian-French project there is a reduction in radar visibility or other requirements associated with some views on the future armored vehicles. The version of reduced visibility can also be confirmed by the contours of the armored hull, which are several intersecting straight planes.

In general, at the moment the concept demonstrator looks exactly the way one of the first prototypes of a promising combat vehicle should look like. In its present form, heavy infantry fighting vehicles of Russian-French development can cause a lot of questions and complaints. It will take some time to improve various parts of the project, but potential customers can now understand exactly how a full-fledged BMP will look like, which will be offered for purchases only in a few years. According to O. Sienko, general director of Uralvagonzavod, the Russian-French infantry fighting vehicle will have to fight for its market share. In this case, one of the main advantages over competitors will be 57-mm automatic gun. The capabilities of such weapons far exceed the potential of existing weapons for armored personnel carriers and infantry fighting vehicles.

The project of the Russian-French heavy infantry fighting vehicle in case of successful completion will have a lot of positive consequences for all companies and organizations involved in its creation. When orders are received, Russia and France will have the opportunity not only to make money on the implementation of contracts, but also to master some new technologies. From the available information, it follows that the Uralvagonzavod companies, the Petrel Research Institute, the Renault Trucks Defense and Nexter Systems intend to build a promising heavy BMP exclusively for sale to third countries. Thus, the main goal of Russian-French cooperation is entering the international market.

Export prospects for heavy infantry fighting vehicles are foggy. Since the first demonstration of this car took place just a couple of days ago, potential customers are currently only considering the possibility of future negotiations regarding the contract. Nevertheless, rumors have already appeared, according to which the Russian-French development was interested in the armed forces of the United Arab Emirates. Official confirmation of such information has not yet been. Probably at the moment this is just a rumor, although some features of the international market for armaments and military equipment can confirm it. The real export prospects of a heavy BMP will be shown only by time.

Ctrl Enter
Noticed oshЫbku Highlight text and press. Ctrl + Enter
We are
Is the "old" well forgotten to become the "new"? Part-2. At the call of honor and dutyPlatform "Kurganets-25" and "Boomerang." Layouts and assumptions
Military Reviewin Yandex News
Military Reviewin Google News
159 comments
Information
Dear reader, to leave comments on the publication, you must sign in.