26 September 2013
35
Russian Defense Minister Sergei Shoigu demanded that Russian developers develop drone unmanned aerial vehicles (UAVs) to accelerate the pace of work. Perhaps the first results of their activities can be seen by the year 2014. According to the deputy chairman of the Military Industrial Commission (MIC) under the Russian government, Oleg Bochkarev, today in our country Tranzas, Sukhoi, and Sokol are engaged in the development of strike drone drone. At the same time, Bochkarev noted that if Transas next year presents its development for testing (a drone with a mass of about 1 tons), then the military industrial complex will be satisfied with these dates. Initially, the development schedule planned the appearance of this UAV no earlier than 2017 of the year.


The deputy head of the military industrial complex explained that Sergei Shoigu gave the above mentioned instruction during one of the demonstrations of Russian projects on unmanned aerial vehicles in Alabino near Moscow. Recall that the topic that affects the need to accelerate work in this direction, rises in Russia quite often. For example, at a recent meeting of the collegium of the Ministry of Defense of the Russian Federation, Sergei Shoigu criticized the developers of military robotics. The Minister proposed to stop cooperation with those companies and organizations that would not agree with the tightening of the development time of various types of weapons.

A fairly large-scale event in Alabino, in which all Russian developments on the UAV, including percussion drone, were shown, took place back in July of the 2013 year. At the same time, Sergei Shoigu was shown the practical use of UAV complexes. Representatives of the industry and the Armed Forces of Russia also presented promising samples of Russian UAVs (around 30 models) to the Minister of Defense of the TTX. 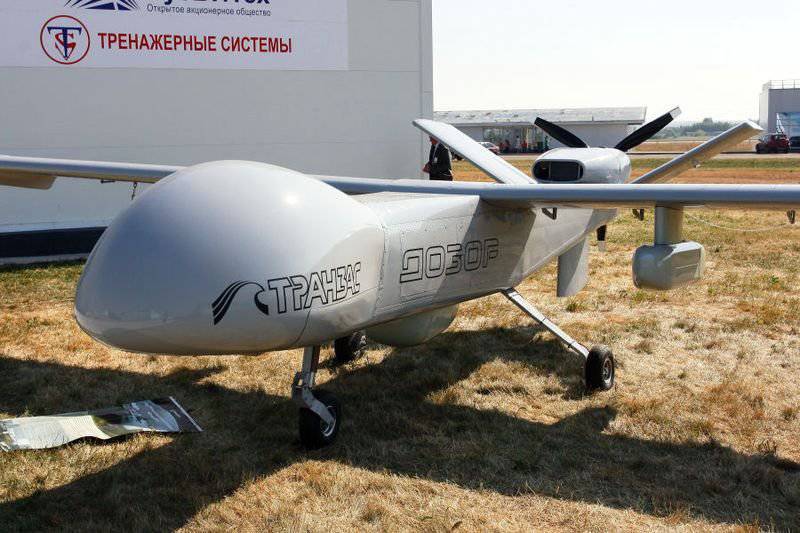 UAV Dozor-600
It should be noted that currently most of the UAVs used in the world are of American or Israeli origin. And although today drones are in service with the armies of many states, including Russia, the United States has the biggest predilection for this type of weapon, which, however, does not quite successfully manage to use them. Information about casualties among civilians in the Middle East as a result of attack drone drone instead of the destruction of terrorists has become almost commonplace. It has even reached conflicts within the United States themselves. For example, not so long ago, a group of activists protested against the construction of a command center based on Horsham.

Today, modern drones are simply necessary for the Russian army. It is worth recalling that it is planned to equip the unmanned aerial vehicle units created in the Russian Armed Forces with these complexes. They are created for the Airborne Forces, the Navy and, of course, the Ground Forces. The creation of such drones is very important for reconnaissance, the effective use of weapons (adjusting artillery fire and aviation), ensuring the actions of troops on the battlefield. At the same time, if there are certain successes with reconnaissance UAVs in Russia, then with drums everything is much more complicated. All of them are currently only at the development stage.

It is worth noting that Russian companies are likely to cope with the implementation of the project on a drone with a mass of about 1 tons. In any case, the St. Petersburg enterprise Tranzas was already engaged in the development of such devices. Previously, this company designed and built a single-engine Dozor-600 UAV, which, according to its characteristics, is quite comparable with the famous American Predator. For example, the St. Petersburg drone with a maximum take-off weight of 640 kg., Able to reach speeds of up to 210 km / h and fly at altitudes up to 7500 m. The range of this drone is 3700 km. Dozor-600 is able to carry a payload of up to 220 kg onboard, being continuously in the sky for up to 30 hours. His first flight of the UAV "Dozor-600" made in 2010 year. 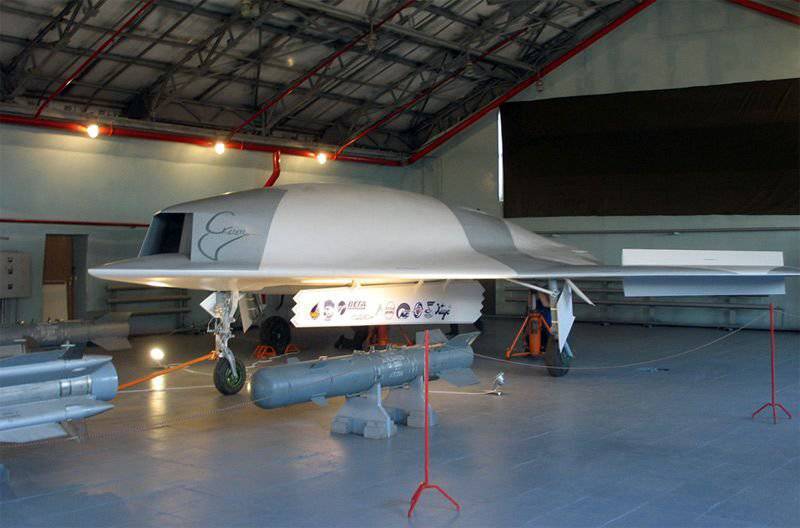 Model of a shock UAV Skat RSK MiG
According to Viktor Godunov, who until 2012 was the vice president of Transas (died 25 on June 2012), his company entered into a strategic partnership agreement with Sokol (Kazan), which provides for joint work on drones created within the framework of tenders announced by the Russian Ministry of Defense. In particular, it was reported that Transas will be engaged in the development of on-board electronics and control systems for UAVs, and the Falcon OKB will be engaged in the design of UAVs and ground complexes for them. Companies can submit their drones next year. If this happens, flight tests of the models can begin with 2015. We are talking about the work on the projects "Pacer" (up to 1 tons) and "Altius" (up to 5 tons).

Also, the Sukhoi Design Bureau is currently developing a drone drone as part of the Hunter’s R & D project. The project of a heavy unmanned impact aircraft weighing up to 20 tons is being developed in the interests of the Russian Air Force. The work is carried out by Sukhoi. For the first time, the country's Air Force plans to get a drone UAV became known as part of the MAKS-2009 air show. According to Mikhail Pogosyan, the work on the design of a new shock drone should be the first joint work of the Sukhoi Design Bureau and the MiG RSK (previously in the MiG they worked on the Scat project). The official cooperation agreement between the two enterprises was signed in October last year.

The terms of reference for creating a drone UAV was approved by the Russian Defense Ministry at the beginning of April 2012, and in early June, the media reported that it was Sukhoi that was chosen as the lead developer for this project. In addition, an unnamed source in the industry reported that the Sukhoi heavy drone drone could be a 6 generation fighter at the same time. It is assumed that the first tests of the novelty will take place not earlier than 2016 of the year, and it will be possible to adopt it not earlier than 2020 of the year. Presumably, this shock UAV will be performed in a modular scheme, which will make it quite easy to change the payload of the device depending on its task.

Ctrl Enter
Noticed oshЫbku Highlight text and press. Ctrl + Enter
We are
Unmanned Alabino. Defense enterprises are fighting among themselves for the attention of the Ministry of DefenseWho, how and why did the country's most important defense enterprises collapsed
Military Reviewin Yandex News
Military Reviewin Google News
35 comments
Information
Dear reader, to leave comments on the publication, you must sign in.