Sniper and his weapon 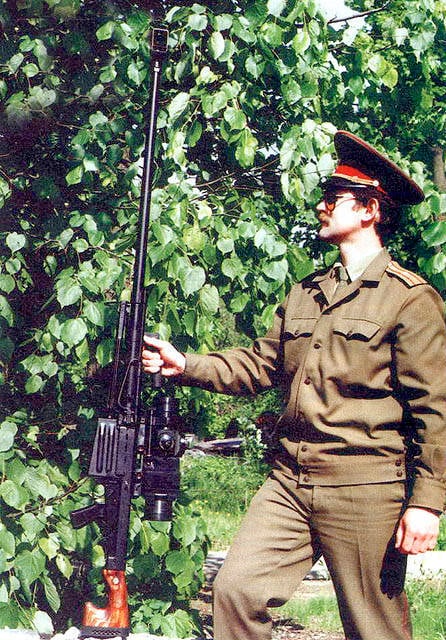 On the great role and importance of sniper weapons Today it is not necessary to write, this phrase is known to everyone. I will only list the main situations in which its use is most effective:


• accurate sniper shot demoralizes the movement of troops of the opposing front positions;
• silent, flameless, accurate shot with a sufficiently high energy bullet solves numerous tasks in the fight against crime, especially in cities, for example, with minimal risk to others, including hostages, it is possible to neutralize the offender both day and night;
• snipers most effectively solve the problem of disabling important technical equipment (communications and surveillance, radar, aircraft at airfields outside the shelters, guided weapons installations, knurling guns, engines of unarmored and lightly armored vehicles).

Naturally, the solution of such a variety of tasks can not provide a sniper rifle of any one caliber.
Around the world, as a rule, cartridges of predominantly caliber 7,62 are used; 8,58 or 12,7 mm. The 7,62 mm rifle cartridge is effective in live targets at distances up to 600 m, the 12,7 mm cartridge does this task at distances up to 1000 m, and other tasks up to almost 2 m.
Recently, the 9 × 39 cartridge with a heavy (16,2 g) subsonic bullet has become popular in Russia. It is used in “Vintorez” sniper rifles, shooting only with a silencer, and VSK-94, from which shooting is possible without a silencer. There are two types of these cartridges: SP-5 with a lead core bullet; SP-6 and PUB-9 with a bullet with a steel hardened core. They have different internal ballistics. The accuracy of SP-6 and PUB-9 is somewhat worse than SP-5. All three have minimal bounce. 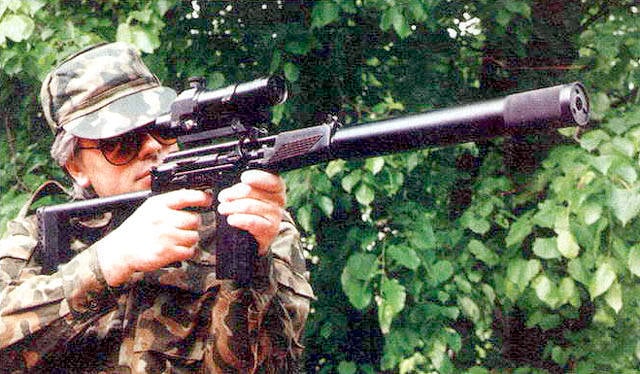 "Vintorez" and VSK-94, perhaps, an ideal sniper weapon of the near line (up to 300 m) for urban conditions, as it provides to the greatest extent the safety of the civilian population, if necessary - silent and flameless shot and successful overcoming of personal protective equipment. When using the SP-5 cartridge and the PSN-4 1 multiple-sight rifle, they provide a dispersion width of 100 and no more than 7,5 cm. See 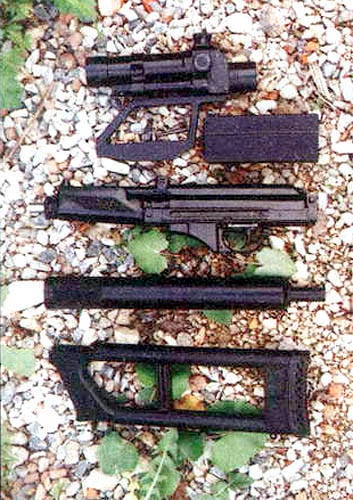 VSK-94 rifle has a quick-folding design, for carrying it fits into a case or a cartridge pouch. Assembly takes less than one minute

I can not express my opinion about the widespread domestic sniper rifle SVD. According to the technical conditions with the PSN-4 1 multiple-sight, it ensures the accuracy of the R100, equal to 4 cm at the 100 distance m (accuracy of the sniper cartridge when shooting from a ballistic barrel is characterized by the dispersion diameter 6 cm at this distance). Characteristics are not perfect. Many will object to me that they have reached the best accuracy, but with such extreme values ​​of the parameters the SVD rifle has the right to enter the army. In the ideal case, at a distance of 600 m, a circle of bullets of about 50 cm is obtained, seemingly for firing (the defeat of a living target with the first shot) is already extreme. In addition, PSO-1 can provide good aiming with no more than 400 m. A big bewilderment leaves familiarity with the domestic Instruction on the SVD. First, it contains a detailed table of median deviations and core bands, as if it was not a sniper rifle at all, but a machine gun. Worldwide, the main characteristic of a sniper rifle is the diameter of dispersion of the first shot bullets, and this is understandable. After all, the sniper needs to know the area at a particular distance, in which the holes fit, and nothing else. The main shot for him is the first, and the subsequent ones become extremely dangerous for the shooter himself. Therefore, to characterize the quality of the rifle should be a group of shots no more than 5, not 10, as described in the Specifications and Manual. Orientation in the number of rounds necessary to defeat a single target (on the 171 Manual) is completely absurd. What kind of “living figure” will allow you to make 9 shots at it at a distance of 1000 m or 2 - on 400 m. 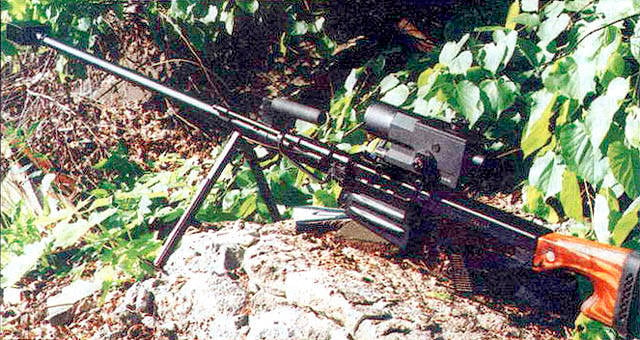 The reader thought that I hated the famous SVD rifle. Not at all, you can firmly say that this is one of the best sniper rifles. It deserves special praise for its reliability and performance, however, the PSO-1 sight clearly weakens its dignity at the global technical level. It is necessary to replace this sight with a modern, 7-multiple. It would be nice to bring the sniper cartridge 7,62 × 54 according to the accuracy and accuracy parameters to the well-known “Extra” cartridge (on 300 m the dispersion diameter is 8 cm). It was then that the SVD could be called a great sniper rifle to hit living targets at a distance of up to 700 m, and not up to 1300, as stated in the Manual.
Currently, in small quantities, the SVU OTs-03-AU sniper machine gun, unified with the SVD rifle, is being produced. He uses the same ammunition, has the same firing range, but due to the use of the bullpup layout on the 235 mm shorter than the SVD. Equipped with bipod and can conduct automatic fire. Of course, for left-handed IEDs is not suitable.
Now about the domestic sniper rifle caliber 12,7 mm. This is already quite well known for advertising the B-94, five-charge semi-automatic under the standard machine gun cartridge 12,7 × 107. The rifle is original in that in the transport position it folds up to 1100 mm with a barrel length 1000 mm. The sniper long-range rifle will justify its name if the cartridge provides accuracy from a ballistic barrel at a distance of 100 and approximately 3 cm (width) or at a distance of 1000 and approximately 40. Unfortunately, such a cartridge has not yet been created. Practically it is possible to provide more or less sniper firing with regular cartridges, selecting them by beating the tip of the bullet relative to the ramp of the liner by an amount not exceeding 0,1 mm. In this case, the rifle provides the 5 diameter of cm from the 5 series of shots at a distance of 100 m. The rifle is equipped with a special 13 X-ray optical optical sight 13 × 60 optical sight. Its feature is the displayed set firing range and the permanent location of the mark in the center of the lens when firing at any range (up to 2000 m). Good comfort shooting provides removal of the pupil sight to 110 mm. However, the mass of the PIC 13 × 60 is large (3,5 kg). Therefore, an 12-fold lightweight PIC 12 × 54 sight has been developed without highlighting the set range. 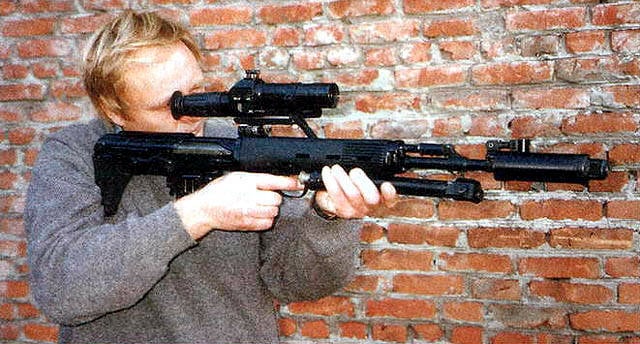 Sniper machine SVU OTs-03-AU, developed on the basis of the SVD, with a PKS-7 07 multiple sight collimator sight 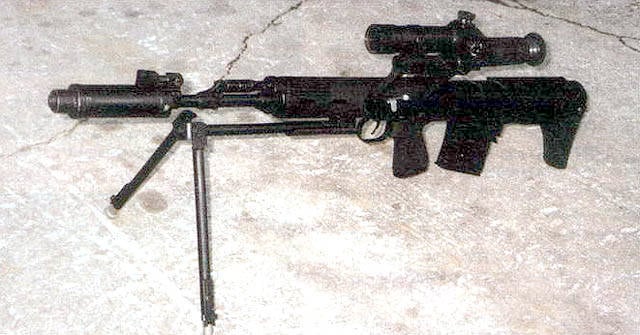 The VCA OTs-03-AU, in contrast to the SVD, has adjustable bipods and a muzzle device that performs the functions of a muzzle brake, a flame arrester, a compensator and somewhat reduces the level of muzzle pressure when fired

An important aspect of the use of sniper weapons is shooting at night. The night sights on electro-optical converters of II and II + generations with automatic brightness control, not subject to illumination from lighting flares, projectile breaks (PKN-03; PKN-032; PKN-04), make such shooting for all types rifles considered here.

Analysis of local wars of recent decades shows that the ideal sniper weapon is one that hits the target, as already mentioned, from the first shot. In addition to solving all the technical problems associated with the cartridge-weapon complex, the implementation of this task at long distances poses the most difficult problem — wind demolition. Its influence on the distance for different bullets is shown in the 1 table. The table shows that for bullets calibers 7,62; 9,0 and 12,7 mm with their initial speeds effective range sniper shots are limited mainly due to wind demolition and only in calm weather you can fully realize the technical capabilities of the cartridge-weapon in terms of accuracy of the shot. An amendment to wind drift, especially with an increase in range, is always individual and cannot be precisely determined due to the diversity of wind strength and its direction over the distance. So, the advantage in accuracy of a shot at long distances is acquired by bullets that have the greatest resistance from wind exposure.

If we comprehensively analyze the second and subsequent shots from a sniper weapon, then in addition to the wind drift factor, the trunk heating factor begins its impact. Its main components are: 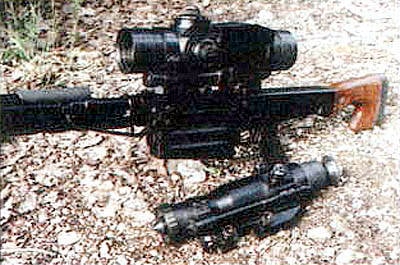 T - increase in barrel temperature from one shot;
m is the mass of the trunk;
~ - trunk stiffness along its length;
t is the time between shots.

When firing at long distances at moving targets, it is necessary to pay great attention to the speed of movement of the target in the direction perpendicular to the firing line, because even a walking person at a distance of 1000 m will be able to move approximately 2 m during a bullet flight. This factor requires precise calculation of the correction based on a wide experience of visual observations or measurements. Of course, you can dream of a sight, measuring the distance to the target and its transverse speed of movement, and then automatically introducing an amendment. Unfortunately, the work on such sights only unfold.

If we talk about the impact on the accuracy of firing of the actual designs of rifles, then we can say that the single-shot with the sliding gate are the most accurate under all other identical conditions. Therefore, probably, along with the famous SVD, a single-shot rifle for the same cartridge for solving super-tasks in accuracy has the right to exist, as well as for the cartridge 9 × 39 and 12,7 × 107 mm. Naturally, these rifles should be in the hands of particularly talented shooters, including left-handers, and have a design feature for individual adjustment to the physiological characteristics of the shooter, like sports rifles, but to meet the requirements for military weapons.

Given the significantly increased use of sniper shooting in order to maximize the effectiveness of the first shots, it is imperative that thorough training of professional shooters, deeply aware of the laws of internal and external ballistics, as well as the influence of many other factors on the accuracy of a bullet, is essential.

Graphs of lateral displacement of trajectories of bullets of calibers 12,7; 9,0 and 7,62 mm when exposed to wind (4 m / s). The sensitivity of the shot to the side wind (in terms of the displacement of the trajectory) is crucially determined by the ballistic coefficient of the bullet.
It is advisable to estimate the accuracy of the shooting of the cartridge-rifle sniper complex only by the size of the diameter and no more than five first shots, and maybe only three with strict accounting for the time between shots.

In Russia, there is a development to the optimum range of sniper rifles and ammunition for all-round use.

It is necessary to replace the PSO-1 sight on the SVD rifle with a modern, 7-multiple sight and to create two light night sight sights for shooting with the VSK-94 and Vintorez rifles at distances to 300 m and for SVD and B-94 at distances to 600 m

It is required to speed up work on the modernization and creation of cartridges: 9 × 39 single sniper with an armor-piercing core, ensuring accuracy over the dispersion diameter of no more than 7 cm at a distance of 300 m; 12,7 × 107 with accuracy over the scattering diameter about 25 cm at distance 600 m.

Requires the creation and production of single-shot sniper rifles with a sliding bolt and ergonomic adjustment elements, implementing the most effective quality of all three types of cartridges.