Russian Helicopters expect to double their market share by 2020 year

25 September 2013
13
By 2020, the Russian Helicopters holding company expects to increase its share of the world helicopter market by a factor of 2, selling every 4 helicopter produced abroad. A significant part of these plans will be implemented at the expense of the company, located in Rostov-on-Don. It is about the Rostvertol plant. In the Russian market, the main support for long-term growth for this company was the intensification of the state defense order, under which the Russian armed forces will replenish around the 200 Mi-28H helicopters manufactured in Rostov.


Today, the Russian Helicopters holding is one of the world's leading helicopter manufacturers and the only helicopter manufacturer and developer in our country, as well as one of the few companies in the world that has the capabilities to design, test, manufacture and maintain modern military and civil helicopters . The head office of the holding is in Moscow. Russian Helicopters OJSC includes helicopter factories, design bureaus, enterprises producing, servicing and repairing components, as well as its own service company, which provides after-sales support for helicopters in the Russian Federation and abroad. The holding was formed in 2007, however, the key enterprises belonging to it have more than a 60-year history. 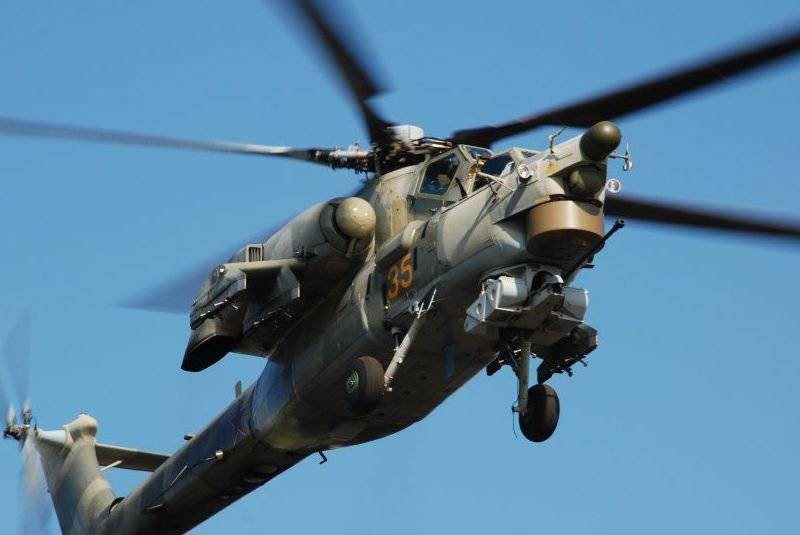 The companies that are part of the holding are the developers of unique technologies that have come to life in world record holders and bestsellers. Without a doubt, these include: Mi-8 / 17 - the most popular helicopter in the world in the entire history of the industry; it is produced today at 2-s enterprises in a variety of modern versions; Mi-26 (and its modifications) - the most lifting helicopter in the world, able to carry cargo weighing up to 20 tons.

In recent years, the holding has demonstrated a steady growth in its financial indicators. Thus, the company's revenues in 2012 increased by 21% (compared to 2011) and amounted to 125.7 billion rubles, profit increased by 35,2% and amounted to 9,4 billion rubles. In 2012, the holding's enterprises delivered 290 helicopters to the market, which is 10,7% more than the 2011 indicators of the year. In August 2013 of the year it was announced that the holding would release a 2013 helicopter in 321 year, which immediately in 2 times more than was produced in the crisis year 2009. By the end of the decade, the holding’s enterprises expect to issue (according to the order portfolio) 870 helicopters for a total of about 388 billion rubles, including 232 vehicles for export. The development strategy of the enterprise provides for the growth of annual sales to the level of 400-450 helicopters by 2020 with sales and after-sales service worth at least 240 billion rubles. 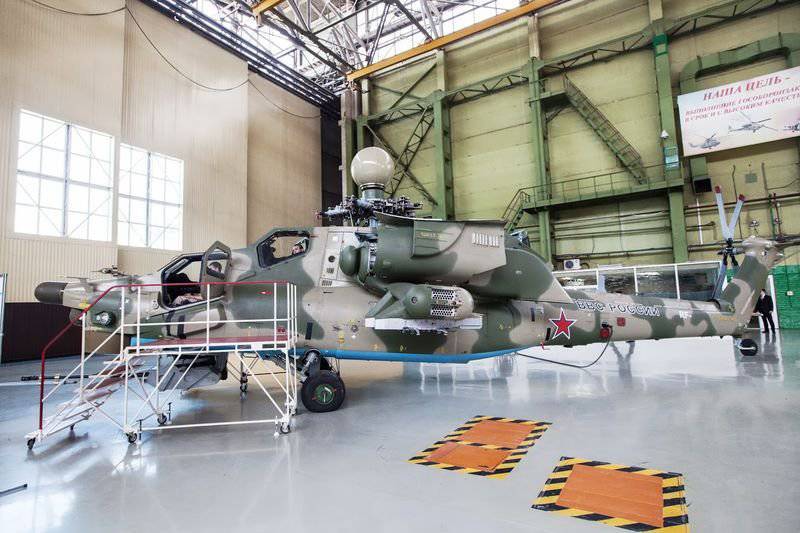 Such forecasts allow us to hope that the share of Russian helicopters in the world market will increase from 10,7% to 18%, and the annual volume of domestic production will grow to 450 machines annually. A significant part of this order is to be delivered to the Rostvertol enterprise, which only in 2012 year produced the 54 helicopters of the types Mi-35М, Mi-28Н and Mi-26 for all customers. The company's revenues for the year 2012 amounted to 30,232 billion rubles, exceeding the same indicator of the year 2011 more than 1,5 times.

From Russia with love

According to experts of the company Teal Group Corp., up to 2020, around the world, about 4667 combat helicopters will be sold for a total amount of 62,3 billion dollars. Currently the American company Bell Helicopter (23%) leads in this market, Eurocopter (2%) is in 18,75-m place, Sikorsky (3%) is in 12,3-m place. Domestic company "Helicopters of Russia" is located on the 4-th place, occupying a niche in 10,7%. In the event that the predictions of the state holding's development strategy come true and the industry finances remain at the promised level, after only 7 years the Russian company will be able to significantly press Eurocopter and reach the 2 position in the world. For the Rostov-based company Rostvertol, this is a real chance to become one of the leading world leaders in the sales of not only military, but also heavy civilian helicopter technology. Especially against the background of the fact that competitors abroad are only going to develop their own classmates' projects, and, as is known, more than one year passes from the drawing stage to the production stage.

At one time (during the crisis in the domestic defense industry), the supply of helicopters for export became a real lifesaver for Rostvertol. At the beginning of the 2000-s, when the share of military vehicles in the total output of Rostvertol reached 96%, 66% of production was exported. Abroad, eagerly bought the world's heaviest commercially-produced transport helicopter Mi-26T, as well as the upgraded combat attack helicopter Mi-35. Is a modernization of the famous Mi-24 "crocodile", the helicopter is equipped with thermal imagers, night vision devices, satellite navigation system. 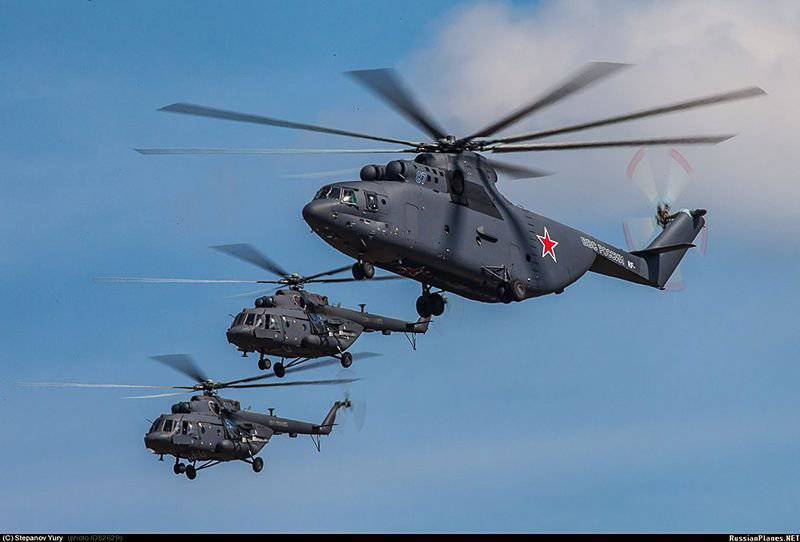 Gradually, the share of government orders began to grow. The decisive fact was the promise of the former Russian Air Force commander Vladimir Mikhailov to begin the process of replacing the combat attack helicopters Mi-24 with another Rostov machine, the Mi-28H “Night Hunter”, with the acquisition of 300 helicopters from Rostvertol. In parallel with this, the process of integration of the enterprise into the holding company “Helicopters of Russia” was going on. At the same time, the entry into the holding group refuted all the most pessimistic forecasts, the company is currently developing rapidly, increasing not only domestic, but also export deliveries, expanding the geography of sales. Until recently, the proportion between the helicopters delivered as part of the defense order and for export was 50 on 50, and now 65 to 35, said Rostvertol general director Boris Slyusar.

The traditional market for Russian Helicopters in the international arena is developing countries (China, India, countries in Africa and Latin America). In the 2011 year alone, the company's order book increased by 2 from 429 to 859 helicopters for more than 330 billion rubles. To consolidate positions on the world stage of the company allows the consolidation of the industry. So says Sergei Yarkova, who is the deputy general director of Russian Helicopters for Finance and Development. According to him, in 5 years, the holding managed to change the cost and capital structure, turning OJSC Helicopters of Russia into a successful, efficient company. By combining industrial and scientific potential, the holding was able to get rid of many duplicate functions, and as a result of the centralization of procurement, it was possible to achieve an 4-percent reduction in costs (700 million rubles).

If we talk specifically about Rostvertol, then its share in the global helicopter market is estimated at 2,5%. From 2001 to 2012, the Rostov team exported more than 150 different helicopters for the year. In particular, in 2012, 11 combat Mi-35М was exported (3 - to Brazil, 8 - to Azerbaijan). Total Azerbaijan should receive 24 new helicopter, Brazil - 12. One of the new markets for the company is Iraq. The first contract for the supply of Russian weapons to Baghdad over the past 10 years was signed at the 50 anniversary jubilee air show Le Bourget. Iraq acquired several new Russian night helicopter Mi-28НE “Night Hunter” as part of a package agreement concluded a year earlier totaling $ 4,2 billion. According to the representative of Rosoboronexport Alexander Mikheev, the contract involves the delivery of "more than 10 helicopters" to Iraq. 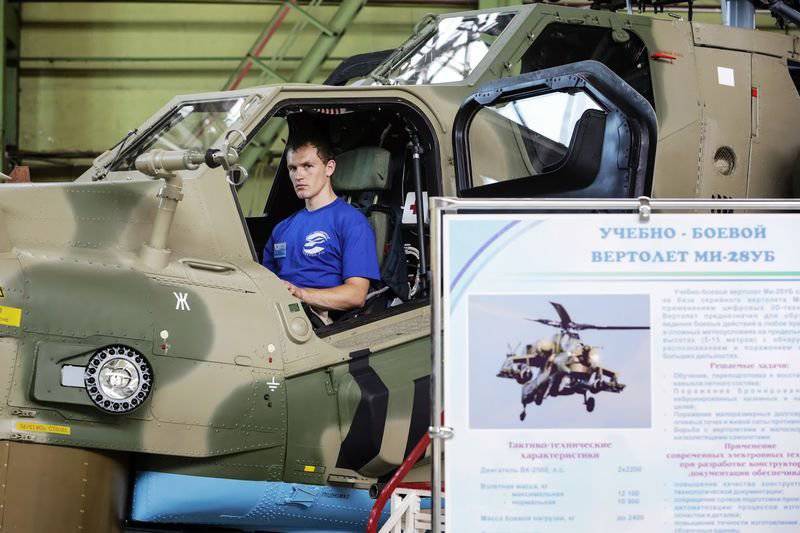 According to Mikheev, this contract also includes a training program for pilots and technicians, as well as the supply of all the necessary weapons for the machine. Iraq became the first foreign state to order Mi-28HE helicopters, said Ruslan Pukhov, director of the Center for Analysis of Strategies and Technologies (CAST). This transaction is important for the promotion of the machine on the international market. Until recently, the helicopter was purchased only by the Russian Ministry of Defense.

Also, Russian Mi-26T heavy transport helicopter is in constant demand among foreign customers. Today it is the only car in the world capable of transporting loads of up to 20 tons on an external sling or in a cabin. The closest American competitor in terms of payload - the Chinook helicopter manufactured by Boeing has already escaped more than once with the help of a Russian helicopter. The Mi-26 was deployed several times to transport the Chinook helicopters shot down in Afghanistan. Americans simply do not have a helicopter capable of carrying out such an operation. Nowadays, except for Russia and the CIS countries itself, the Mi-26T helicopter is actively exploited by India, China, Greece and Venezuela.

In the near future, the Rostov aircraft manufacturers do not foresee any problems with the sale of helicopters in the domestic market. In the next decade, the Russian Air Force expects to purchase about 1000 new helicopters. The state weapons program for 2011-2020 years provides for the acquisition of X-NUMX Mi-200H helicopters. It is on their release today, and made the main rate in Rostov. In 28, the troops will have to receive a new, upgraded version of the Mi-2015HM helicopter, which will finally get rid of all the “childhood ills” of the new helicopter. Re-equipment of army aviation with new helicopters is in full swing. 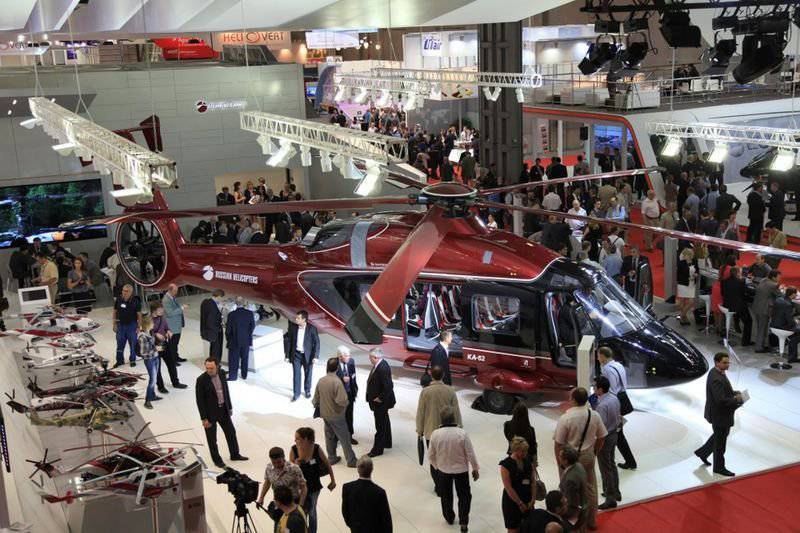 Each Mi-28H helicopter costs the customer in the amount of the order of 245-250 million rubles, so the Rostov enterprise has funds for the modernization of production. Back in 2010, Rostvertol spent 174,3 million rubles for the reconstruction of workshops for the production of Mi-28H and another 392,3 million rubles for the launch of serial production of the export version of the machine - Mi-28HE. In the past few years, the plant completed the reconstruction of all workshops involved in production. Currently, the pace of production of Mi-8 / 17 helicopters in Russia exceeds the Soviet figures, funding for the purchase of Mi-28H is reserved in the budget, so Rostvertol can feel quite calm.

It is interesting to note that at present, there is a parallel development of the 2-x projects for the launch of combat attack helicopters inside Oboronprom, which should replace the old Mi-24 old man - the Moscow Alligator and the Mi-52Н from Rostov. Both helicopters are offered by the Russian Air Force as the main one. The analyst believes that the advantage in this internal confrontation of 28 models will be taken by those who will be able to quickly establish a mass production of helicopters. The new leadership of the Ministry of Defense of Russia intends to further develop competition and clearly fulfill its financial obligations. In this case, the producers themselves must fulfill their obligations. “Rostvertol”, it seems, successfully copes with them, the annual release of the Mi-2H here already amounts to dozens of pieces.