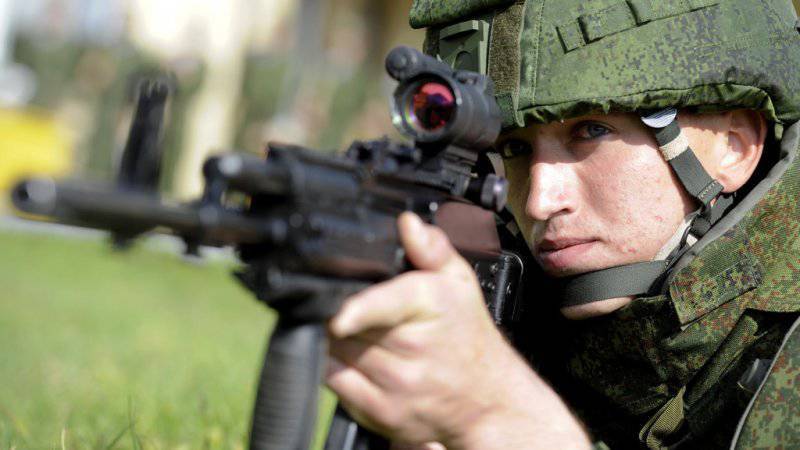 One of the main topics in the field of rearmament of our army in recent years has become a promising machine gun. New type of rifle weapons must be put into service over the coming years or even months. At present, the Ministry of Defense and specialized organizations are conducting the activities necessary to determine the most appropriate design. Tests and checks are closed, but September 24 in the domestic media, there was some information about their progress.

The Izvestiya newspaper reported that the Ministry of Defense, after conducting preliminary tests of several types of small arms, decided not to allow the AK-12 to be subjected to state tests. An unnamed source from the headquarters of the ground forces spoke about the causes and consequences of such a decision. According to him, during the tests, the machine gun itself and other types of weapons created on its basis do not meet the requirements of the customer and therefore cannot claim to be used with the equipment of a soldier of the “Warrior” system. Instead of the AK-12 assault rifle developed in Izhevsk, Russian soldiers can get weapons of a similar class, created by employees of the Kovrov Plant named after them. Degtyarev.

Izvestia quoted the words of V. Gromov, the chief designer of the Kovrov enterprise. He said that the new types of weapons submitted to the Defense Ministry competition are a further development of the famous AEK-971 submachine gun. Created in the eighties, the base machine is equipped with a so-called. balanced automatics. This means that when fired, the bolt group moves backward, and a special balancer-counterweight of the same mass moves forward. Due to this, it is possible to level the action of several forces acting on the machine gun during firing. The use of balanced automation can significantly improve the accuracy and accuracy of shooting. 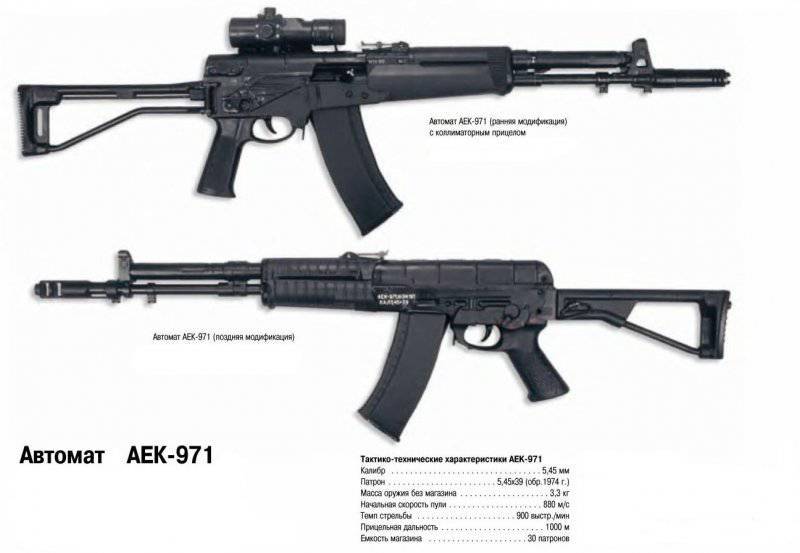 Gromov said that during the preliminary tests, the Ministry of Defense checked five samples of small arms from each organization participating in the competition. All participants, including the plant them. Degtyarev, presented two automatic, two machine guns and one sniper rifle. Development Kovrov gunsmiths successfully coped with the tasks and admitted to the state tests.

The reason for the success of weapons based on AEK-971, according to a source in the test committee, were its high characteristics. Kovrov's weapon showed the accuracy and accuracy of firing indicators demanded from him, including when firing in bursts from unstable positions. As for the weapons developed by the Izhmash enterprise, according to a source told Izvestia, it does not meet the army’s requirements for accuracy, accuracy and reliability. Therefore, AK-12 will not participate in state trials.

A source of "Izvestia" in the command of the ground forces explained that the Kalashnikov concern, which the Izhmash plant had recently joined, still has time to correct the deficiencies identified. If within the next month Izhevsk engineers will be able to rid AK-12 of the existing shortcomings, then the machine can be returned to the competition. However, the source doubts this scenario. He explained that the requirements for the promising machine were announced two years ago. Since that time, allegedly, "Izhmash" failed to create weapons that suit the customer. Therefore, it is unlikely that the new Kalashnikov concern will be able to rectify the situation in just one month.

Finally, a source in the command of the ground forces spoke about the future plans of the Ministry of Defense regarding the current competition for the creation of a new machine gun. After the state tests, selected samples will be put into trial operation in the army. To do this, will be purchased hundreds of new machines, machine guns and sniper rifles. In this case, it is not excluded that AK-12, rejected AK-XNUMX, will also go into trial operation. 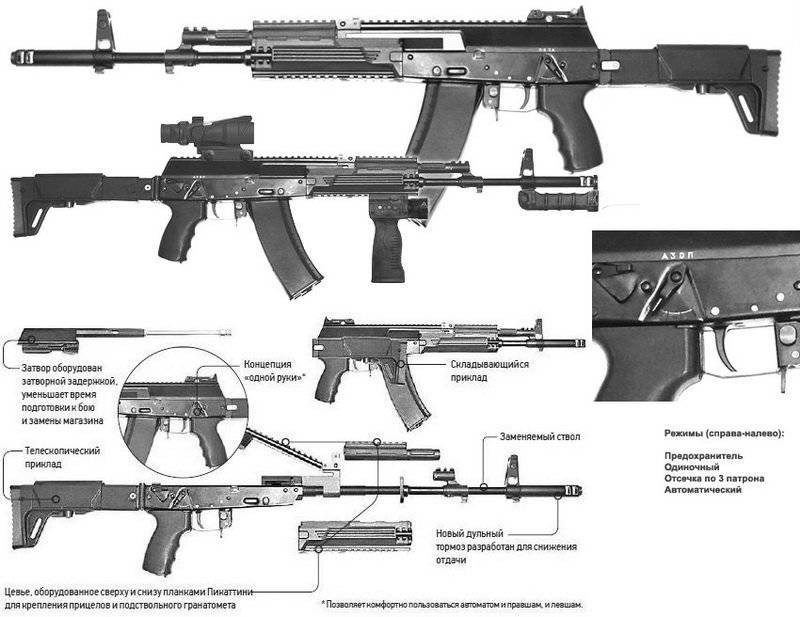 In general, the message "Izvestia" is as follows: Izhevsk designers could not create a promising machine that meets the requirements of the military. Therefore, the new AK-12, about which so much has been said lately, is eliminated from the competition and, most likely, will not be able to replenish the legendary line of weapons that form the basis of the small arms of our army over the past decades.

Just a few hours after the appearance news that AK-12 was prevented from state trials, the Kalashnikov concern published an official press release. According to the concern, AK-12 will participate in state trials. Moreover, during the preliminary tests on the basis of the TsNIITOCHMASH Institute, a sample from Izhevsk, designed for the cartridge 5,45х39 mm, showed its advantages in terms of quality.

According to the official press release of the Kalashnikov concern, the AK-12 machine gun was compared with the Kovrov model of the A-545 model. According to the results of preliminary tests, the overall quality assessment of the AK-12 machine turned out to be higher than that of its competitor, which was created at the Plant. Degtyarev. Due to this, the new development of Izhevsk gunsmiths can take part in the next stage of the competition and has every chance to enter into service with the Russian army.

The press service of the Kalashnikov concern also quoted the words of the general designer of the organization V. Zlobin. As Zlobin said, both samples, AK-12 and A-545, when compared, showed approximately the same indicators of accuracy and accuracy of fire. At the same time, the machine gun created at Izhmash and now being developed by Kalashnikov turned out to be approximately half a kilogram lighter than its competitor. As for the high ratings of Kovrov’s automata, they are due to the fact that the Zapadov Plant. Degtyareva created a weapon based on a single constructive platform.

As a result, AK-12, like A-545, will take part in state trials. However, it is noted that the Kalashnikov concern will finance these works. At the end of the test, a new machine can be recommended for use. The management of the concern is confident that the promising development will be able to pass all the necessary stages of testing and become a new type of armament of our army.

Based on the official press release of the Kalashnikov Concern, we can conclude how the situation around the competition for the development of an automatic machine for promising equipment for the Ratnik soldier looks like. Some nuances of both publications suggest that the new machine AK-12 still managed to pass the preliminary tests, although not without complaints from the customer. This means that in the near future the development company will be able to correct the existing shortcomings, with the result that the following tests will be present modified automaton.

However, the words of some individuals, cited by the publication of Izvestia, make us doubt this version. For example, in the news about the exclusion of AK-12 from the competition, the director of the Moscow branch of the Kalashnikov concern, O. Chikirev, is quoted. He said that Kovrov’s weapons will be subject to state tests at the expense of state funds, and the Kalashnikov concern will pay for financing the verification of Izhevsk’s assault rifles. An unnamed land representative commented on this information as follows. According to him, state tests are tests for state money. Since the state represented by the Ministry of Defense does not want to pay for testing the AK-12, it does not need it. At the same time, nobody forbids the Kalashnikov concern to continue working on the project.

Statements regarding the procedure for financing tests look ambiguous. They can be interpreted in different ways, depending on the desired result. In this regard, the evaluation of the latest news on the course of testing promising automata turns into a rather difficult task. In addition, a characteristic feature of the current situation is the fact that the Ministry of Defense has not yet made any official statements regarding the course of the competition. At the moment, all statements by representatives of the military department are limited to only a few remarks by an unnamed officer from the ground forces command. Naturally, this cannot be considered the official position of the Ministry of Defense.

Although the Kalashnikov concern is an interested party and wants to receive contracts for the supply of small arms, its official press release has the appropriate status and can be recognized as a reliable source of information. The unnamed sources of the Izvestia publication in the armed forces, in turn, cannot be considered as such. Anonymous in all organizations and industries have long earned a very bad reputation, which is why information received from them can be perceived as reliable only with a lot of reservations.

As a result, we again return to the already made conclusion. From the side, the situation around the competition for the development of a new assault rifle for the Russian army looks as if the tested samples, AK-12 and A-545, are generally satisfied with the customer, but should be slightly modified and improved. Therefore, at the moment it will be most reasonable to wait for new messages on the course of the competition, published in the official sources of the Ministry of Defense or participating organizations. Over the coming months or even weeks, the Ministry of Defense may announce the first results of the competition of several machine guns and announce the start of a new test phase. In these messages, a list of companies and structures that have reached the new stage of the competition will be indicated.