25 September 2013
9
At the end of last year, the Serbian Air Force began to receive new aircraft - for the first time in the twenty years that have passed since the SFRYU. And, curiously, domestic-made aircraft.


Of course, it would be naive to hope that this would turn out to be an ultramodern fighter: although aviation there was industry in Yugoslavia, with deep roots and marked by the development of good aircraft, but its highest achievement was the development of light jet attack aircraft. But that was a long time ago, since then, Yugoslavia has disappeared, and the aviation industry, like other military industries, has suffered not only from economic turmoil, but also from NATO bombing. And yet, new aircraft with the optimistic name “Lasta” - “Swallow” went into the series.

Utva Aircraft Industry has existed since 1937 and is engaged in the development and production of light aircraft, its plant is located in Pancevo. Continuing the line of piston combat training aircraft, at the beginning of the 1980-s, the successful Utva 75 training aircraft was replaced by the development of the new UTS 95 training center. The machine also had to be a piston, but with improved aerodynamics, avionics and the ability to use outboard weapons. The main external difference was a different placement of pilots - in tandem, and not side by side, as on the “Utva 75”, which was generally designed more like a tourist plane. From the "Utva 95" pilots had to change to the cockpit of the jet Soko G-4 Super Galeb, and from there to the MiG-21 or MiG-29.

“95 Ustva 1 Lasta” first flew into the air in 1985, in the 1986, the second prototype appeared, “2 Lasta”. It had significant differences from the first - the fuselage was shorter by half a meter, but the wingspan was as much larger, and the horizontal plumage increased. A Feranti ISIS-282D sight appeared in the cockpit - the same as on Super Galeby.
According to the results of testing the first prototypes, a series of ten pre-production planes was modeled on the model “Lasta 2”.

Since it happened back in the time of Yugoslavia, it was decided to distribute the production between the plant in Pancevo and the company Soko in Mostar. In Bosnia, wings were to be manufactured, and then delivered to Serbia, where the fuselages were made and the final assembly took place. But things went yourselves know how, and instead of cooperation, war began. Before she managed to collect six pre-series "Swallows", but their fate was sad: five aircraft were destroyed by NATO bombs in 1999, the sixth also came under attack, they did not restore the damaged car to a flying state and sent it to an aviation museum at Belgrade airport behalf of Nikola Tesla.

It would seem that this was the end of both “Swallows” and “Utva”, however, the plant did not suffer much, it was restored, and in the 2003 year it was even possible to assemble two “Utvs 75” from the remaining parts. At the same time, at Utva, they began to think about resuming the production of Flipper, but in an updated form, especially since after the bombings and changes in the Serbian leadership, international sanctions were lifted, and the country was able to produce military equipment using foreign units and components. 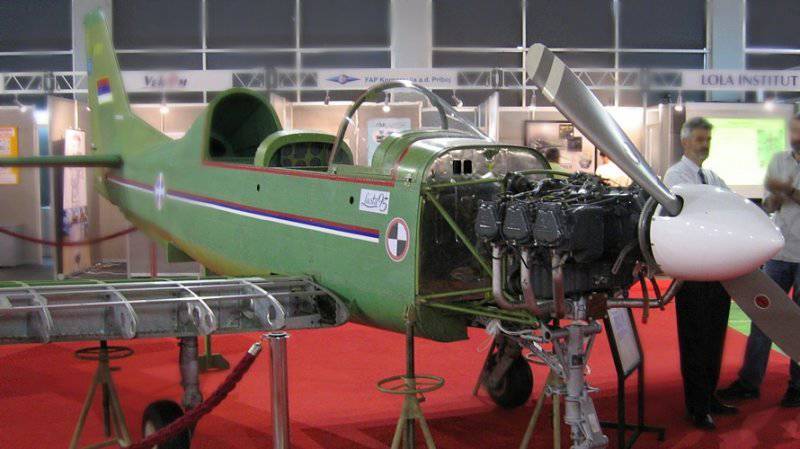 At first they tried to build something out of reserve for the "two", but then they decided that the car needed more significant processing. The Serbs chose the American 295-strong Lycoming AEIO 540-L 1B5.D with the three-bladed propeller Hofman HO-V-123-KV / 200 AH as the power plant. The glider was noticeably refined - new materials were used, the length became somewhat larger than that of the “two”, and the wingspan increased by almost a meter. Shorter chassis were installed, which reduced the weight of the aircraft. It became even easier after replacing the electrical system and batteries, so that in the end it was possible to save as much as 200 kilograms. And this is in spite of the fact that equipment is installed on board that provides flights in adverse weather conditions and at night, landing in category II both on concrete and on grass, ejection seats, and weapons. The Swallow has a Feranti ISIS-282D sight and two suspension units under the wings on which containers with machine guns (ammunition up to 500 cartridges per barrel), 57-mm unguided rockets (seven pieces per block) or one hundred kilogram bombs can be hung. "Swallow", thus, turned out with very predatory claws and beak. 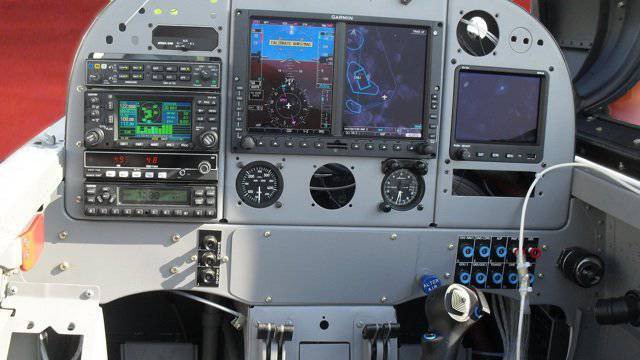 The public, the new aircraft, not named “Lasta 3”, but “Lasta 95”, was shown in 2007 year. The project was strongly supported by the Americans, who most recently bombed Serbia. We must pay tribute to the Yankees: after the carrot they after a while offered gingerbread to the Serbs. Gingerbread was an order from Iraq on 20 (plus an option on 16) aircraft, received in 2007 year; at the same time, Iraqis (more precisely, the Americans behind them) ordered a large batch of rifle weapons, only 350 million dollars, so that the carrot was very sweet - especially when you consider that the Serbian military did not have the money to ensure the fine-tuning of the aircraft and the deployment of mass production. But the Serbian Ministry of Defense did not fail to anoint American gingerbread with domestic jam, stating the desire to buy more 15 airplanes, and the Swallow turned from a semi-theoretical development into a fat bird in the hand, and the plant turned into a quite promising enterprise.
True, there were doubts that a country whose military-industrial complex is going through hard times, even after receiving money, will be able to provide assembly and technical support for the aircraft at the proper level, especially since the plant in Pancevo was practically in a state of bankruptcy. However, both the equipment and the 330 people of the staff appeared, and the work began to boil. 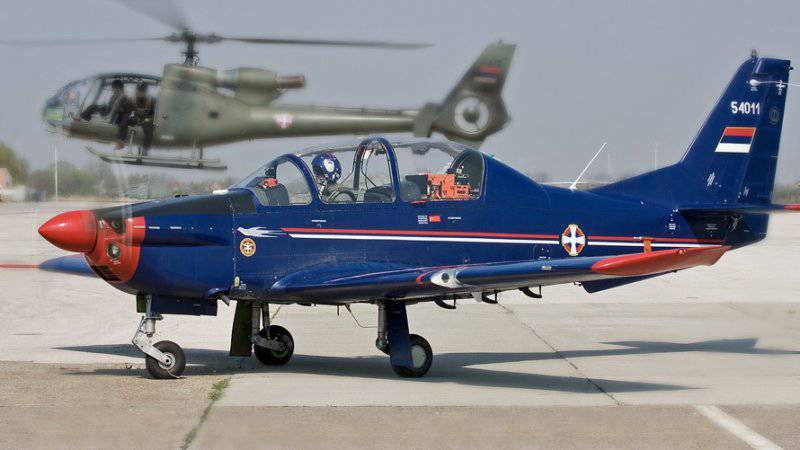 The first flight of the updated aircraft took place at the beginning of 2009 of the year, and deliveries of the Lasta 95Н series machines to Iraq began in the summer of 2010. In February, 2012, the Iraqis received the last, twentieth car, while the option was not being implemented, but the production of the Swallows for the Serbian Air Force began to gain momentum. The first was commissioned last fall, so far three pieces have been delivered. New aircraft, which differ from Iraqi equipment (for example, Garmin G500 avionics), arrive at the 252 training squadron at the Batainitz base, where they continue to be used during the Utva 72 SFRY.

Will there be new orders for Last?

Competition in the external market is great, and such gifts as the Iraqi order are most likely not foreseen. But a small number of aircraft could probably be sold to neighbors in the former Yugoslavia, something somewhere in Africa and poor Arab countries (Swallows were interested in Algeria and Libya, they have prospects in Uganda and Angola) or elsewhere third world where there is no money for Pilatus or Super Tucano- to Myanmar there or even Afghanistan. After all, the cost of the car is only about 300000 euros, the cost of the flight hour is 300 euros.

But potential customers will probably be more interested in the new aircraft created by the Utva on the basis of the Flipper, and with export intentions. "Swallow", as already mentioned, can be used as a light attack aircraft, but still it is not enough for this speed and carrying capacity. And then the Algerian military seemed to have submitted the idea of ​​equipping the aircraft with a turboprop engine and reinforced armament, turning it into an “anti-terrorist” —this is “anti-partisan” —with the possibility of using it as a training one.
The designers of “Utva” did not protest and in April of this year they presented the world with “Swallow” with a turbine, which began to be called more militantly: “Kobac”, that is, a falcon, small falcon. 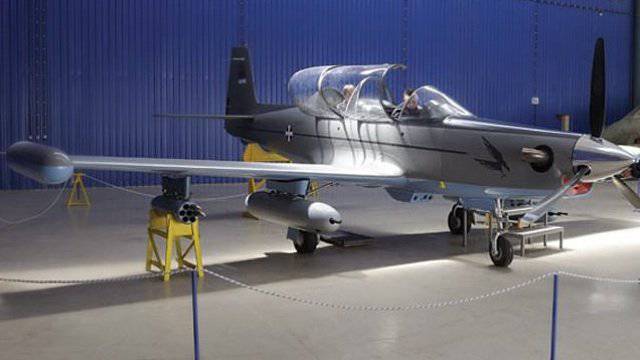 In appearance, this is a typical "anti-guerrilla" aircraft, in which the already classic solutions like fuel tanks at the wingtips have been applied. Improved sighting equipment mounted in a small container under the fuselage, under the wing, a total of four suspension units, designed for 100 kg (internal) and 250 kg (external) loads in the form of bombs, rocket containers and machine guns.

Some experts have expressed doubts that the "Cobatz" can become a normal combat aircraft. The main problem is the weakness of the structure: what was acceptable for the Swallows with an engine of three hundred forces and a maximum speed of 350 km / h is not enough for a car with a turbine (probably Honeywell) twice as large. Of course, the “Kobats” wing is reinforced, however, the declared maximum horizontal speed (500 km / h) is obtained only by 50 km / h less than the maximum for the structure. But, on the other hand, the work goes according to the wishes of the customers, and as they continue, they agree with such restrictions.

True, “Kobats” has a long time to bring - the first flight has been assigned so far to the beginning of 2013 of the year. But the creation of “Lasta 95” reminds of the legend of Phoenix: the plant and the aircraft were revived almost from the ashes, which is good news. So, in the year of its centenary, the Air Forces of Serbia come in, if not the most powerful in their stories, but still replenished by good domestic production aircraft. For a small country there is reason to be proud!