20 September 2013
44
In the development and methods of combat aviation In recent years, several major trends have been observed. Air battles between fighters became quite rare and the main task of the aircraft was to strike at enemy ground targets. At the same time, the cost of new aircraft is constantly growing. The price of the most modern fighter-bombers reaches a level that can reduce the number of people who want to buy them. 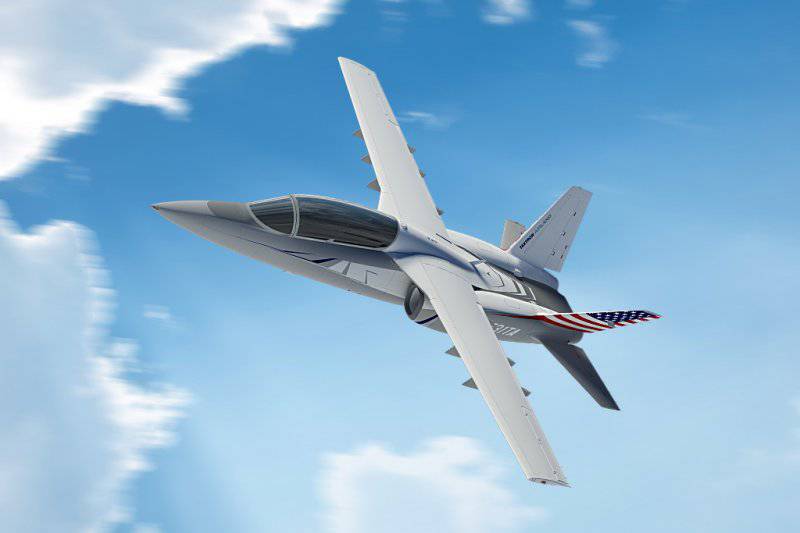 Seeing these problems and wanting to enter the market of combat aviation, Textron and AirLand Enterprises began a joint project to create a relatively cheap strike aircraft with fairly high performance. At the beginning of 2012, the two companies formed a joint venture called Textron AirLand, whose task was to develop and build new aircraft. A promising project called Scorpion ("Scorpion"). The appearance of the strike aircraft was determined as follows. It was supposed to create a light inexpensive aircraft that can strike at ground targets, including using guided weapons. At the same time one of the main objectives of the project was the profitability of the finished aircraft. The technical task required the minimization of the cost of flight hours. This parameter should not exceed 3-4 thousand US dollars. For comparison, the flight time of modern American-made fighter-bombers F-16 costs the operator more than 20 thousand dollars.

The main way to reduce the cost of developing and building a promising strike aircraft was the wide use of technical solutions and technologies obtained and mastered during previous projects. The composition of the conglomerate Textron includes a large number of companies, some of which are engaged in the development and construction of aircraft: Cessna Aircraft, Bell Helicopter and others. Thus, specialists with experience in the field of aircraft industry were attracted to the Scorpion project. The main "source" of borrowing technical and technological nature have become jet business planes Cessna. Such an approach to aircraft design allowed both to reduce costs and speed up the project creation process. As it became known in mid-September, the construction of the first prototype of a promising aircraft is already being completed at one of Textron’s plants. 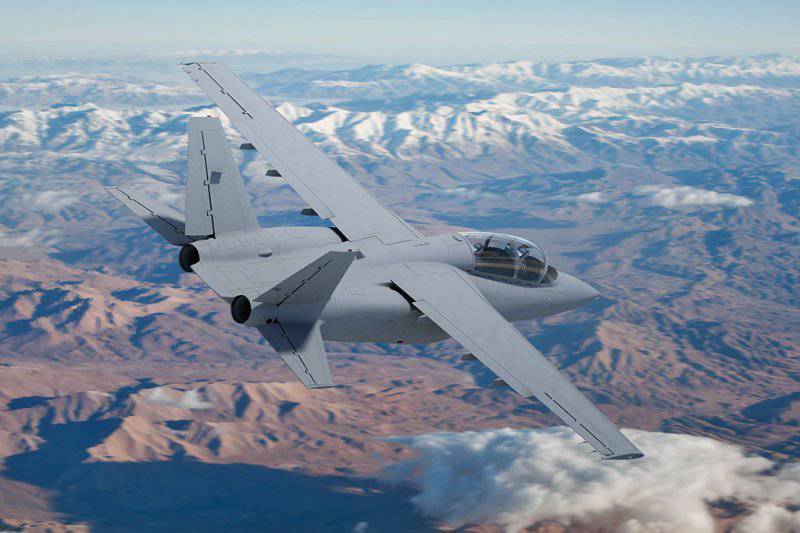 The photographs of the aircraft construction and the published advertising images show that the Scorpion project did not apply any new and bold ideas concerning the layout and aerodynamics. The aircraft is built according to the “high-wing” scheme with a small sweep wing with a span of 14,4 meter, equipped with advanced mechanization. In the forward fuselage there is a double cabin, closed by one lamp. Some interest is the location of the power plant and air intakes. Two Honeywell TF731 turbofan engines with a weight of about 3600 kgf each are located in the tail section, on the sides of the fuselage with characteristic lines. On the parts of the fuselage in which the engines are mounted, mounted horizontal and vertical tail.

In the design of the aircraft Scorpion are widely used composite materials. Of these, made a large number of parts of the fuselage and part of the wing. To carry a payload with a total weight of 1400 kg, the aircraft has an internal cargo compartment and several external suspension nodes located under the wing. According to the authors of the project, the aircraft will be able to carry uncontrolled and controlled weapon different types. The exact nomenclature of models of rockets and bombs available for use has not yet been named. Perhaps it will be determined in accordance with the requirements of the customer.

Electronic equipment of the aircraft Scorpion, according to some data, will meet a number of requirements for modern aircraft. At the same time, despite the use of modern multifunctional displays, navigation systems, etc., the architecture of the avionics and the types of equipment used are defined with the need to simplify and reduce the cost. In particular, the new strike aircraft is not equipped with an electric remote control system, which is considered to be the standard for modern combat aviation. Instead, it will use a system of cables and ropes.

Earlier it was reported that the maximum take-off weight of a promising strike aircraft will not exceed 10 tons, and the empty mass will be about half. With the help of two engines Scorpion can accelerate to a speed of about 830 kilometers per hour. Due to the specifics of the work of modern strike aircraft, the Scorpion does not need a high flight speed. In addition, during operations for the direct support of troops in which it is required to constantly be above the battlefield, to find targets and destroy them, the Scorpion plane will have to fly at a speed that is significantly lower than the maximum. It should be noted that the requirement of the possibility of “hovering” over the battlefield affected the aerodynamic appearance of the aircraft, in particular, the use of a low swept wing. If necessary, the aircraft will be able to rise to a height of over 13,5 thousand meters and fly to a distance of 4500 kilometers. 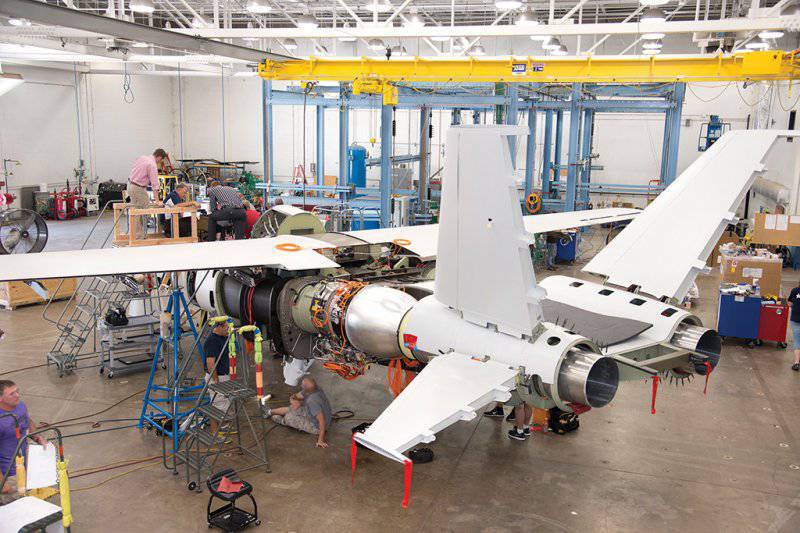 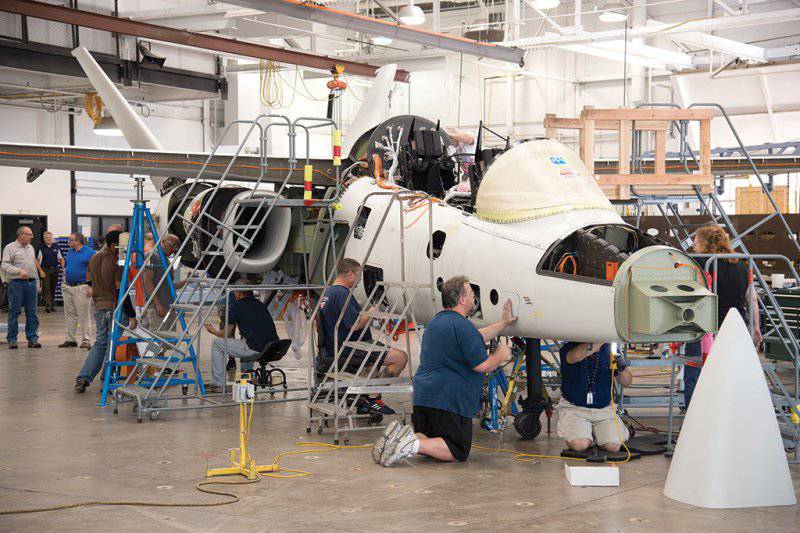 Currently, the construction of the first prototype of the Scorpion aircraft is coming to an end. In the near future, ground tests will begin and by the end of this year the first aircraft should take off into the air. The Textron AirLand joint venture has not yet announced the cost of the finished machine. However, according to representatives of the developer, the Scorpion production aircraft will be several times cheaper than other modern strike aircraft. At the same time, however, it is not indicated with which aircraft the new development was compared. It is also stated that the cost of the flight hour of the promising shock machine will be within 3 thousand dollars.

It is assumed that the Scorpion will be "the most affordable tactical aircraft in the world." As potential buyers of this aircraft are considered third world countries in need of modern aviation technology, but without the ability to buy fighter-bombers or attack aircraft of leading world manufacturers. Textron AirLand hopes that in these countries the Scorpion will be able to replace the outdated Russian or American equipment.

Perspectives Textron AirLand Scorpion aircraft is not yet fully clear. However, statements about the low cost of the aircraft itself and its operation suggest that the project will attract much attention from third world countries. With regard to the volume of contracts, they will depend primarily on the cost of promising strike aircraft, but this parameter has not yet been announced.