18 September 2013
4
On September 10, British Defense Minister F. Hammond announced the signing of a contract to supply the Sea Ceptor anti-aircraft missile systems to the naval forces during an exhibition of weapons and military equipment DSEI-2013. In the next few years, the British Navy will receive complexes and missiles worth 250 million pounds sterling (about 390 million US dollars). The new air defense missile systems will be used on the currently operating 23 Type frigates and on the promising 26 Type frigates. The Sea Ceptor complex will come to replace the latest modifications of the Sea Wolf air defense system. 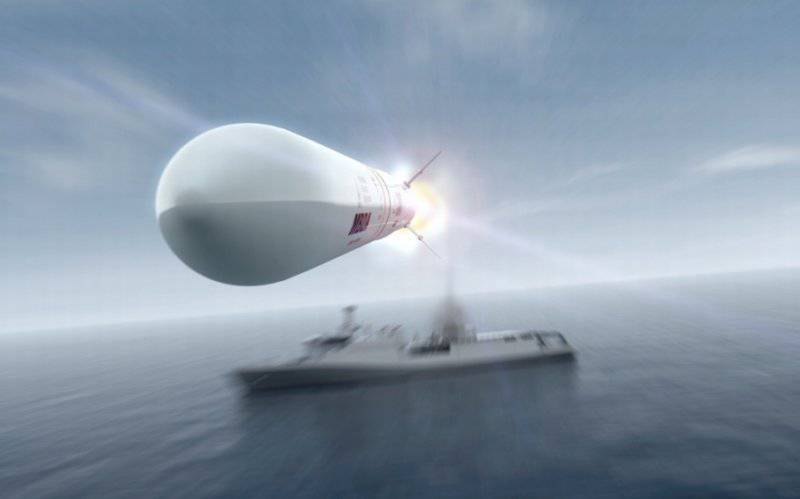 The Sea Ceptor anti-aircraft missile system was developed by MBDA in collaboration with BAE Systems, EADS and Finmeccanica. It is a shipborne air defense system, created in the framework of the FLAADS project (Future Low-Altitude Air Defense System - "Perspective low-altitude air defense system"). The ship complex is supposed to be armed with CAMM (M) (Common Anti-Air Modular Missile (Maritime)) missiles - “Unified modular anti-aircraft missile, sea”), also created during the FLAADS project. In addition to the ship version of the FLAADS SAM system, there are projects of the land variant with the CAMM (L) rocket and the air-to-air modification of the CAMM (A) for the air force.

The FLAADS project started in the middle of the last decade. His goal was to create a promising short-range and medium-range anti-aircraft missile system, suitable for use in the ground forces and on navy. In addition, the determined appearance of a promising anti-aircraft missile allowed the creation of a third version of the ammunition intended for arming fighter aircraft. The development of the anti-aircraft complex and missiles for it was carried out in two stages.

During the first MBDA and the companies participating in the project, together with research organizations of the Ministry of Defense of the United Kingdom, worked out technologies and solved the main issues related to the appearance of the rocket. During the first stage of development, they were engaged in vertical start systems from a silo launcher in accordance with the SVL concept (Soft Vertical Launch - "Soft Vertical Start"); relatively simple, cheap but effective active radar homing head; detection and control systems, as well as a number of other technical and conceptual problems. 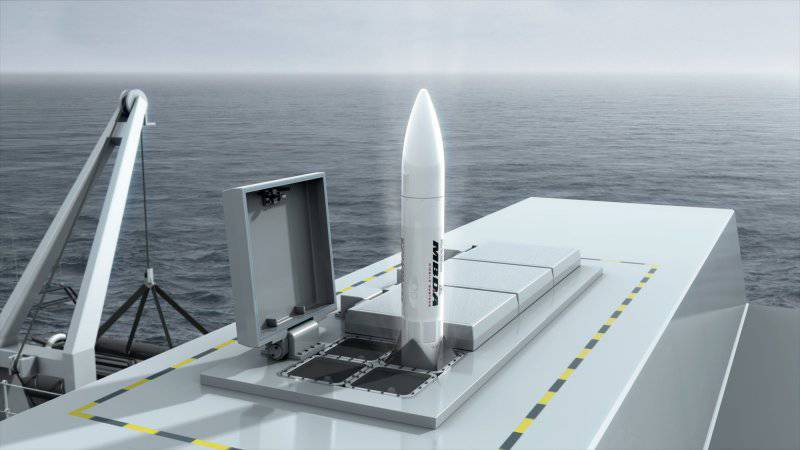 The second phase of the project began in 2008. His goal was to work out the found technical solutions and test various systems. From 2008 to 2011 year, MBDA employees conducted several test runs using the SVL system. The last test “soft start” occurred in May of 2011. This test launch of a combat missile weighing simulator completed the second stage of the development of a promising air defense missile system. In the future, all the work on the FLAADS project was carried out in the direction of improving the electronic equipment of the rocket and carrier platforms.

The next important milestone in stories The FLAADS project became a contract signed in January 2012. In accordance with this document, MBDA and related companies received 483 million pounds (about 770 million dollars) for completing the development of the FLAADS anti-aircraft missile system in a version for naval forces. The SAM system with the CAMM (M) missile was called the Sea Ceptor. The offshore version of the complex was planned to be put into service first. Anti-aircraft complexes for ground forces and missiles for the Air Force will go into series a few years after it.

The exact characteristics of the Sea Ceptor complex and CAMM (M) missiles have not yet been named. So, the big questions are caused by the maximum target range. Some sources indicate that the rocket can hit targets at ranges up to 25 kilometers. At the same time there is information according to which a ship with an air defense system Sea Ceptor can protect an area of ​​about 500 square. km A simple calculation shows that in this case the range is approximately two times smaller than the declared 25 kilometers.

The CAMM (M) rocket has a length of 10 feet (3,2 meters), body diameter excluding 6,5 inch stabilizers (166 mm) and weighs 220 pounds (about 99 kg). The ammunition is equipped with a folding tail assembly, consisting of four stabilizers in the tail section. According to reports, the rocket using a solid-fuel engine can accelerate in flight to a speed of about 1020 meters per second. This will allow guided munitions to intercept various aircraft and anti-ship missiles. Targeting missiles at the target will be carried out using an active radar homing head. There is also a two-way communication channel with the anti-aircraft complex. The warhead of the high-explosive rocket. 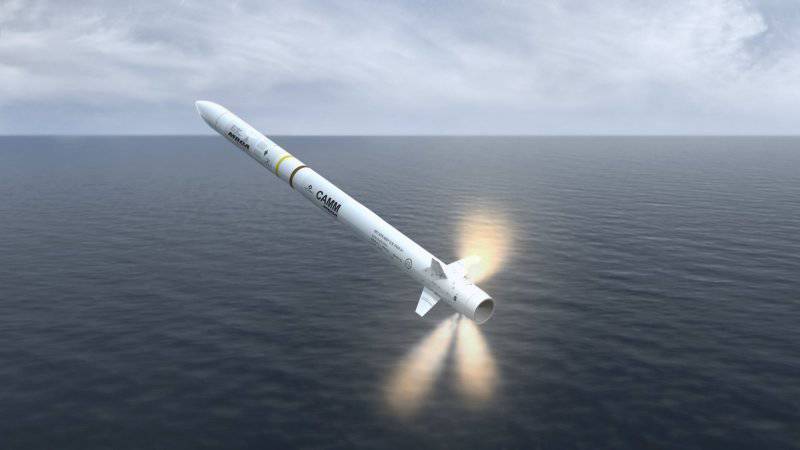 The relatively small dimensions of the new missiles will make it possible to use the space available on ships with greater efficiency. For example, it will be possible to load a container with four CAMM (M) missiles into a single cell of a US-made vertical launcher Mk41 of the American design. However, the UK Navy will not take advantage of this opportunity immediately. On 23 Type frigates, Sea Wolf missile launchers will be replaced with Sea Ceptor units without changing the number of missiles transported. Thus, the ammunition of short-range anti-aircraft missiles of the ships "Type 23" will remain the same. On ships of the new project “Type 26” the number of anti-aircraft missiles will be different, since it will be determined taking into account the needs of the fleet.

September 10 held a new test rocket CAMM (M). On this day, British experts from MBDA, together with colleagues from the American company Lockheed Martin, conducted joint missile tests for the Sea Ceptor anti-aircraft complex. In accordance with the agreement of May of this year, the two companies completed the main work on the integration of the Sea Ceptor missiles and the Mk41 vertical launcher. Reportedly, managed to hold a series of successful launches. It is expected that the use of CAMM (M) missiles with American-made launchers will provide the Sea Ceptor complex with large export prospects.

The first Sea Ceptor anti-aircraft missile systems will be used by the British Navy in 2016. During the first years, the Ministry of Defense and the MBDA company will study the features of the use of missiles and technical equipment of the complex. At the same time, within the framework of the FLAADS program, the development of two other variants of the air defense system will be carried out. The first, according to current plans, should be the land version of the anti-aircraft complex.

The FLAADS version for the ground forces (by analogy with the ship, sometimes referred to as Ceptor) will appear no earlier than 2020 of the year and will be replaced by the Rapier air defense system currently used. The ground combat module of the air defense missile system will be a container with missiles and part of the necessary equipment. As expected, this will allow air defense of both stationary objects and troops on the march, setting the container in the right place or transporting it on a suitable transport. The final appearance of the anti-aircraft complex for the army has not yet been fully determined and may change markedly before the 2020 year.

Little is known about the CAMM (A) missile project for the Air Force. MBDA announced that promising aviation An anti-aircraft missile will be used on aircraft now using ASRAAM ammunition. The most noticeable difference between an aircraft missile and the marine and land versions of CAMM will be rigidly fixed planes. Operation on airplanes allows not to reduce dimensions to a minimum, due to which it will be possible to slightly reduce the weight of the rocket due to the folding mechanisms of stabilizers. The characteristics of the CAMM (A) are expected to be at the level of other rockets of the family. There is no exact information regarding the architecture of guidance systems. Probably, it will be slightly modified equipment of the existing Sea Ceptor missile complex.

In view of the expected timeframes for the launch of armaments, missile projects for ground forces and aviation are still at the design stage. The rocket for the shipborne anti-aircraft complex Sea Ceptor is already being tested, but its practical use will begin only after a few years. The years remaining to the end of the decade, MBDA employees will have to work actively: in the early twenties, it is planned not only to adopt the ground-based Ceptor air defense system, but also to begin operating the first ships of the 26 Type project.