The fire on the submarine "Tomsk" and its consequences

18 September 2013
85
On Monday, September 16 on the nuclear submarine "Tomsk" (project 949А "Antey"), undergoing repairs at the seaside plant "Zvezda", a fire occurred. In the morning local time, smoke appeared in one of the compartments of the submarine, as a result of which 13 fire fighting and fireboats were called to the dry dock in which the Tomsk was located. Within a few hours the fire was extinguished. 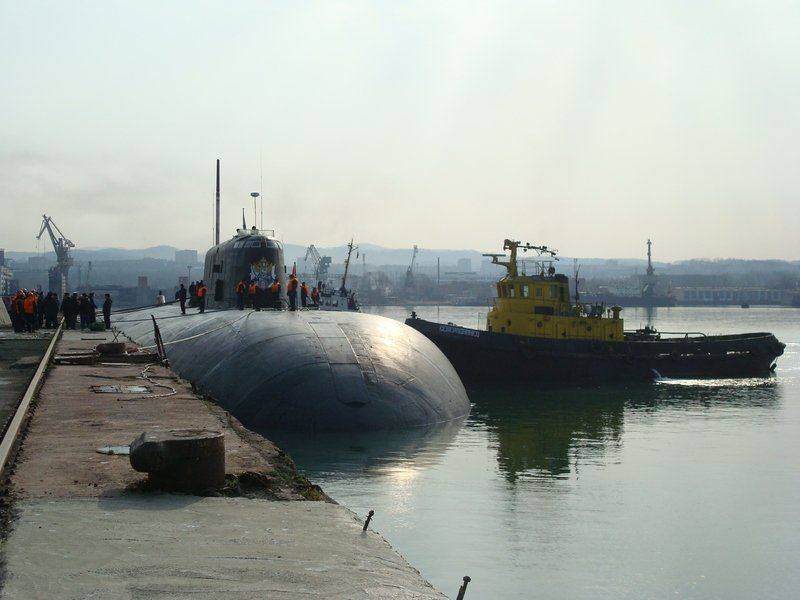 Shortly after the first News about this incident in the press there were speculations about the causes of the fire. According to reports, the reason for the smoke in one of the compartments was the carelessness of the shipyard employees. When carrying out welding work on a lightweight body, a spark hit a certain part of the ballast tank mount. As a result, the rubber coating and cable routes ignited. At the same time, according to some publications, rubber and wiring were only smoldering, and there was no open fire.

13 Pacific fire brigades were called to the scene fleet and MOE. It took more than four hours to eliminate the fire. During the incident, 15 sailors were injured. Now they are in hospital. The result of the fire was damage to some parts of the main ballast tank. RIA Novosti, citing a source in the Ministry of Defense, writes that it will take a few days to eliminate the consequences of the accident. Estimated recovery time for damaged structures is 10 days. According to the Ministry of Defense, the fire incident does not pose any danger to the environment. The boat "Tomsk" has long been under repair, therefore weapon aboard absent and reactor stopped.

Already in the afternoon of September 16, the garrison investigation department of the Gulf Shooter opened a criminal case against officials related to the repair of the submarine. They are suspected of committing a crime under Article 286 of the Criminal Code - abuse of office. As part of this criminal case, several examinations will be carried out to help establish an accurate picture of the incident and identify those responsible for it.

It should be recalled that the “human factor” during welding work is not the first time that it causes various incidents on Russian submarines. The largest in the newest stories Russian Navy accident caused by the negligence of workers, occurred 29 December 2011 of the year. Then, in the dock of the 82 shipyard (Roslyakovo, Murmansk region), when a technological hole was cut in the light hull of the Ekaterinburg submarine, a fire also occurred. Unlike the events at the Tomsk submarine, in December the 2011 of the fire spread over a large area: the flames spread to the wooden forests surrounding the submarine, and then to the light hull and the space between the hulls. The fire lasted about nine hours. The submarine "Ekaterinburg" is still under repair.

At this time, the damage from fire caused by a violation of safety measures during welding operations is much less. However, the fact that the Russian nuclear submarine is not the first time was at great risk because of the negligence of repairmen, forced the Ministry of Defense to draw the appropriate conclusions. On Monday, the head of the Russian military department, S. Shoigu, spoke about the first results of the investigation into the causes of fire. The main version at the moment - a violation of safety during the work. In connection with the incident at the Tomsk nuclear submarine, S. Shoigu demanded to strengthen control and supervision at Russian shipbuilding and ship repair enterprises. The second requirement of the Minister concerns the timing of the repair of the injured submarine. The Ministry of Defense wishes to receive assurances from the Zvezda plant that the fire that has occurred and the restoration work associated with it will not affect the total repair time and the timing of the return of the Tomsk boat to service.

At the selector meeting on the incident at Tomsk, President V. Putin also expressed his point of view. He ordered the Ministry of Defense to deal with the situation and determine the range of measures necessary to ensure that such incidents do not recur. Putin recalled that this is not the first case of such an accident and all measures are required to be taken to eliminate such incidents in the future.

A set of measures designed to eliminate such incidents in the future is still being developed. However, now the Ministry of Defense intends to take some steps that directly or indirectly affect the course of repair of ships and submarines. According to the head of the armaments department, Major General A. Gulyaev, at present the military department is preparing a lawsuit for the Zvezda plant. The military is not satisfied with several aspects of the enterprise. Shipbuilders, according to Guliaev, do not comply with the deadlines, and the quality of work leaves much to be desired.

A good example of why the Ministry of Defense intends to sue the factory "Zvezda", is the course of repair of the submarine "Tomsk". The submarine was docked back in the 2009 year and, in accordance with the repair contract, was supposed to be back in service back in the 2011 year. In the future, due to the failure of the initial deadlines, the 30 of July 2013 was appointed the date of completion of the repair. However, as of mid-September this year, the technical readiness of the submarine is only 80%. The military department still hopes to get the repaired submarine "Tomsk" before the end of this year, but is already preparing a lawsuit. The Ministry of Defense intends to receive compensation in the amount of 110 million rubles. In addition, there may be another lawsuit related to another breakdown of the deadlines.

As you can see, a small fire without an open flame led not only to the insignificant complication of the repair of the submarine, but also to the great consequences of an organizational nature. Because of the next fire on the repaired submarine, the Ministry of Defense is forced to give greater priority to the issue of the quality of repairs and control over their implementation. In addition, it intends to recover a significant amount from the enterprise, which twice failed to repair just one submarine. The results of the investigation of the causes of fire will be known later, but we can already say that they will also be followed by the corresponding conclusions.

Ctrl Enter
Noticed oshЫbku Highlight text and press. Ctrl + Enter
We are
The fire on the submarine "Eagle" and the lack of informationOverview of the activities of Russian shipbuilding enterprises in 2012
85 comments
Information
Dear reader, to leave comments on the publication, you must to register.