The body kit for "Kalash"

17 September 2013
177
Kalashnikov assault rifle continues to be one of the most common samples of small weapons worldwide and the main rifle unit of the Russian infantry. Given this, this weapon is constantly being improved and modernized. One of the possible options for upgrading this weapon is to install Picatinny slats on it, which allow you to install various modern “body kit” on the AK, which improves product characteristics and its combat capabilities without changing the design.


Picatinny rail is a special bracket or rail track system that is used on small arms to unify the fastenings of various accessories, including laser sightings, tactical lights, bipods and various sights (collimator, optical). These strips are widely used in the armies of the NATO countries and comply with the STANAG 2324 standardization agreement. More recently, they have been registered on Russian small arms, in particular, on the new Izhevsk AK-12 machine gun.

Picatinny rail in cross section is a broad letter "T". All additional devices for small arms are installed on this bar, while there is the possibility of their easy movement on the rail back and forth or opposite to rigid fixation with the help of a vice, levers or bolts. In order to avoid the displacement of the fixed attachments during recoil, possible deformation of the attachment during thermal expansion and cooling of the weapon barrel during firing, as well as for mounting fasteners in the Picatinny rail, special transverse slots are made at regular intervals. The dimensions of these slots are standardized and a large number of attachments use them for fixing against movements.

The advantage of the Picatinny rail is the fact that they can be installed not only on new types of weapons, which, of course, include AK-12, but also old mass-produced models - different versions of AK-74. Last year, NPO Izhmash presented to the military 4 a variant of modernizing the most popular at the moment Russian AK-74. The cost of modernization directly depended on the chosen option and was supposed to be from 2-x to 10-ti thousand rubles for one machine.

The simplest version of the AK-74 modernization could be carried out directly in the military workshops, without withdrawing the machine guns from the units. This option provided for installation on the forearm of the Picatinny rail machine. Thanks to this decision, it would be possible to install electron-optical, optical, collimator sights, as well as laser designators, flashlights and other “body kit” on the weapon. In addition, AK-74 had to get the side bar, which is suitable for mounted devices with dovetail mount.

The most difficult version of the AK-74 modernization involved working in the factory. This option provided for the installation of the front folding handle, barrel lining with Picatinny rail, ergonomic pistol grip, telescopic butt, as well as a special magazine with the ability to visually control the number of cartridges. At the meeting of the interdepartmental working group at the military-industrial commission, it was decided to test the machine in the maximum version of modernization. 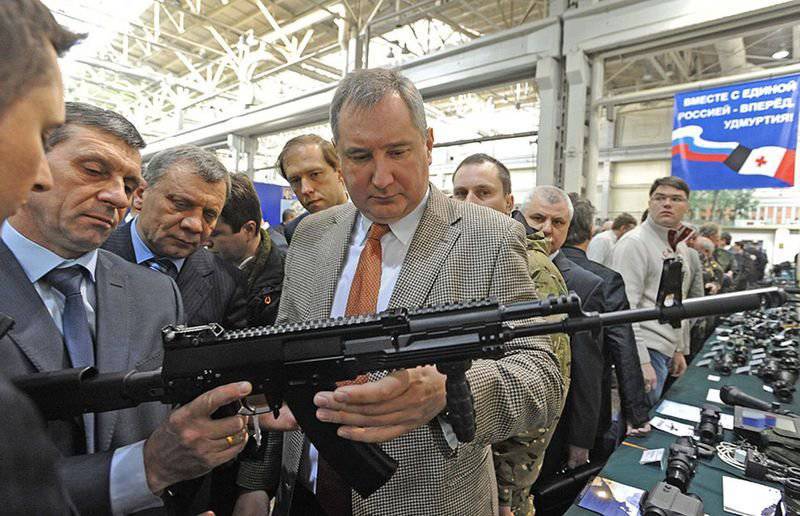 Currently, most of the slats for Russian-made AK, as well as its legal and illegal copies (China, Bulgaria, Venezuela, etc.) and Saiga carbines, designed on its base and selling well in the US market, are offered by American by firms. Below are a few popular solutions from US manufacturers.

The American company Parabellum Armament presented its version of the Picatinny rail for mounting various sights on AK series AKARS - AK Adaptive Rail System. This plate has a hinge device and is attached to the AK in 4-x points on top of the receiver cover. It is worth noting that the front part of this strip is structurally made as an element of a metal sight, which is installed on the AK still at the factory and which must first be removed. After attaching the AKARS strap to the AK, you can install a variety of modern optics on it. This system allows you to easily remove the receiver's cover for servicing and cleaning the machine gun; there is no knocking down of the sight settings and there is no need for a new calibration. 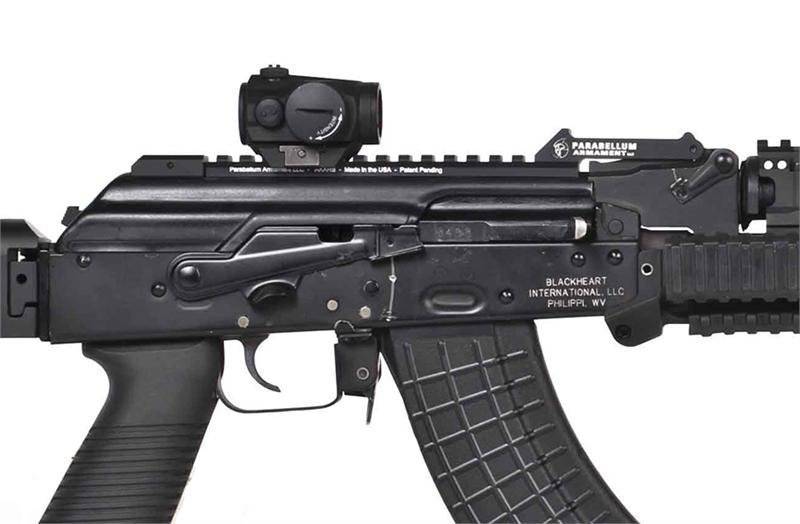 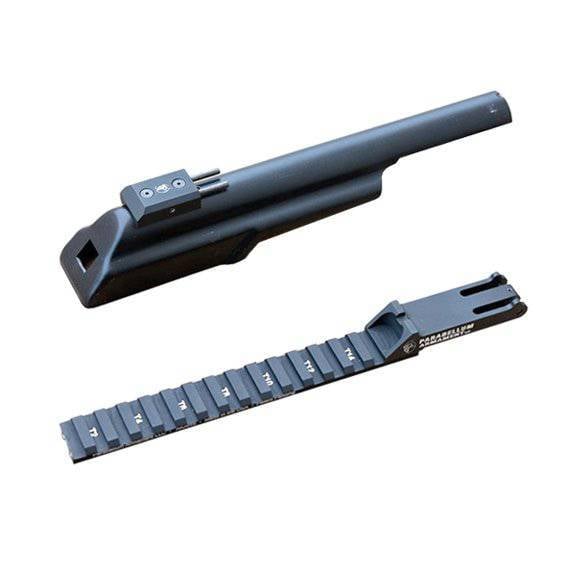 Earlier, a representative of Blackheart International (engaged in its sales) spoke about this bar as follows: “The AK and its modifications have never been“ friendly ”to consumers who would like to improve the accuracy of the weapon by mounting modern sights. Previously, various strips have been created that ensured the installation and adjustment of optics on the lid of the receiver of the machine gun (the most ergonomic position for the sight), however, there was a problem with the settings of the sight, which was simply discarded. Now, thanks to AKARS, you can use the most current sights at the moment to improve the accuracy of the machine without resetting their settings. ”

The AKRR2 mounting bracket for Kalashnikov assault rifles was introduced by Strike Industries and allows you to mount an 2 sight on the AK at once. A feature of this strap is the ability to mount a second sight, which is mounted in front of the main one at an angle of 45 degrees. The AKRR2 bar, in fact, is a further development of the AKARS bar and has three main structural elements: the base, the main mounting bar and the mounting bar at an angle of 45 degrees. In this case, the base is attached directly to the machine and is a support for fastening other strips. It is attached to the machine with 3-x hexagonal screws.

The bar at an angle of 45 degrees can be fixed both on the right and on the left side of the weapon and is ideal for mounting small collimator sights. At the same time, the main straight bar is designed for mounting Aimpoint and EO tech sights, as well as some types of optical sights. The AKRR2 fixing strip is made from aviation aluminum and subjected to the anodizing procedure (the process of creating an oxide film on the metal surface to give it additional protective properties). According to representatives of Strike Industries, the AKRR2 bar represents a new level of adaptation of modern sights on the Kalashnikov machine platform. The cost of this strap in the US market 59,95 dollar. 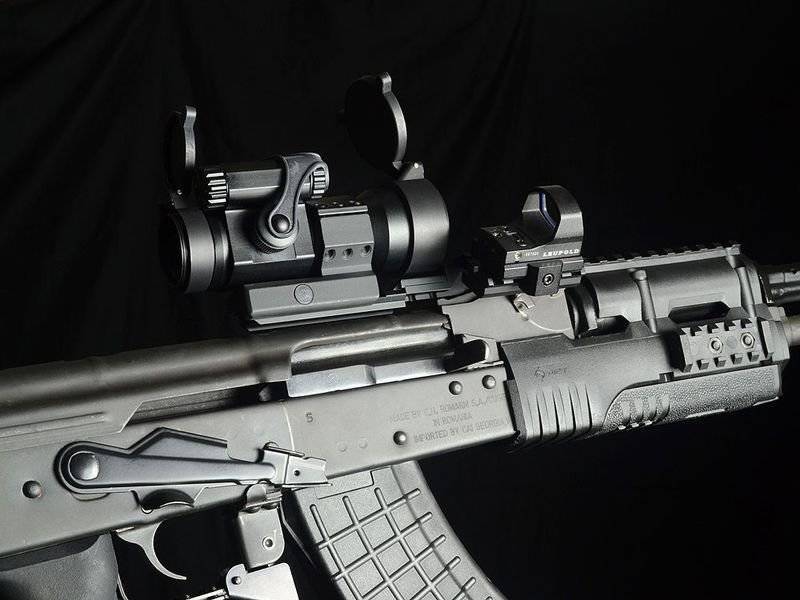 Features:
The receiver box can be removed with mounted strap AKRR2;
Ease of installation of a level;
High adaptability to the requirements of the shooter;
Adjustable base.

Another solution from Strike Industries on the Kalashnikov assault rifle market is a conversion kit for replacing a standard AK metal sighting system with a Picatinny rail, which allows you to install improved scopes and a variety of low-profile optics on the product in the future. The cost of this set is 45 dollars. 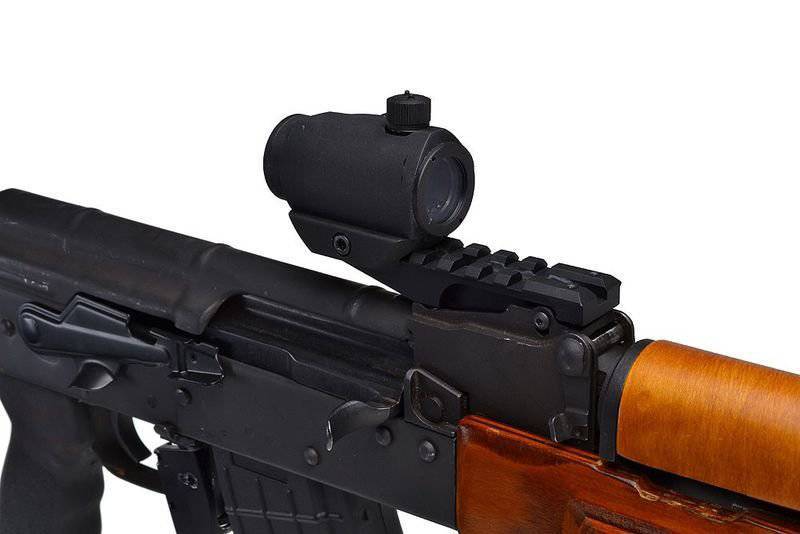 Features of the conversion kit:
- Ability to adjust (up / down, right / left);
- Installation in just one step;
- Plank from aviation aluminum;
- It is recommended to use a low profile sight with a red dot.

Another solution to modernize the Kalashnikov is to use the KOP-Kalashnikov Optics Platform, which is manufactured by Sabrewerks (Wisconsin, USA). This plank represents another approach to solving the old problem with the installation of various optical and sighting equipment on the Kalashnikov assault rifle. Most of the previously manufactured AK, for example, made in China, is absolutely not suitable for the installation of such equipment. Later versions of automata, such as the Romanian WASR 10, have an initially installed mounting plate located on the left side of the receiver and intended for installation on an optics machine. But even the presence of the mount does not allow to use the whole range of optical and sighting equipment on AK. Moreover, a variety of mounts can create difficulties when mounting the aiming point. 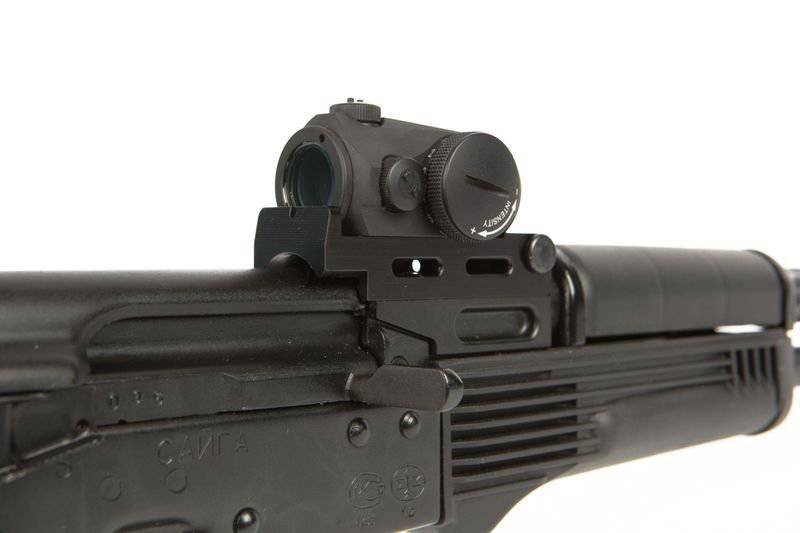 Kalashnikov Optics Platform is devoid of these shortcomings. First, it is required to undergo a slight change to the standard sight of the machine gun, dismantling the rear sight. Secondly, the KOP bar includes 2 parts. The first of which is the base, is installed in place of the dismantled staff pillar, and the second is installed with the desired sight and is connected with the aid of an easily removable pin with the first one. All elements of the strap are made of aluminum. One of the additional options is mounting on a KOP bar Picatinny rail. In addition, the KOP strap allows you to install and classic metal pillar.

According to the developers and a number of users who have experienced KOP strips, this mount is tough, there are no clearances when handling weapons, and the mount does not interfere with the maintenance of the machine during cleaning. The base of the KOP bar in the US market is from 121 to 131 dollars, and the base-mounted part, depending on the version, is sold at prices from 81 to 159 dollars.

Bracket for sight AK from the company RS Regulate

RS Regulate has introduced its new bracket for mounting scopes on AK series machines. This is the 2 generation of mounting brackets for optics, which feature is a smaller thickness, a new fixation system, and, as the developers themselves say, increased product reliability compared to a similar Russian design. The new bracket from RS Regulate allows you to mount the sight in the center of the machine. The bracket has a thickness of 3 mm less than the earlier version, while the new mount is modular. Total consumer 3 type brackets with different lengths of the mounting surface. This solution allows, depending on the characteristics of the body of the shooter, to move the sight closer or farther from itself. It also allows the use of ACOG or BCO sights. The price of the new fastener is about 145 dollars and depends on the type of slats preferred. Additional strips can be purchased at the price of 45 dollars. 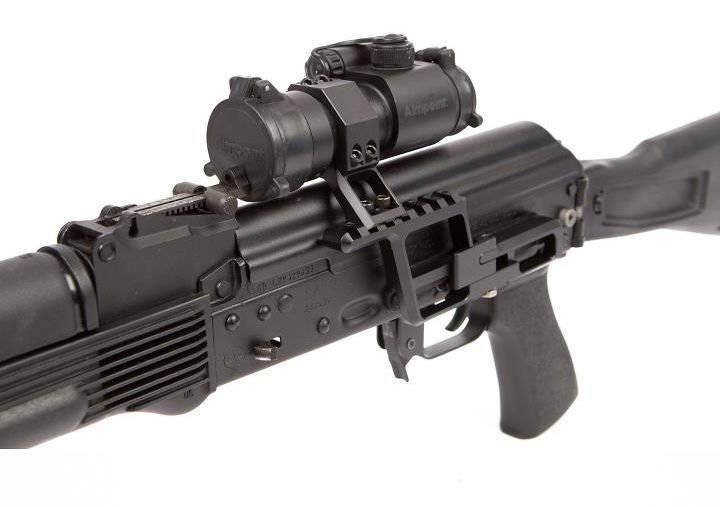