DARPA will create a multi-headed "Hydra" for the US Navy

17 September 2013
8
The US Congress demands that the Pentagon drastically reduce costs. The military budget for the next ten years should be reduced by 500 billion dollars. This means that a number of important programs and projects will be subject to a serious reduction, while others will be completely closed. In this regard, even now the US Department of Defense is attempting to reduce its costs without deteriorating the state of the armed forces and preserving their defense potential. Not so long ago, the agency DARPA, engaged in promising developments, launched preliminary work on the Hydra program (“Hydra”). The aim of the program is to create a set of tools designed to assist the naval forces in patrolling the oceans. 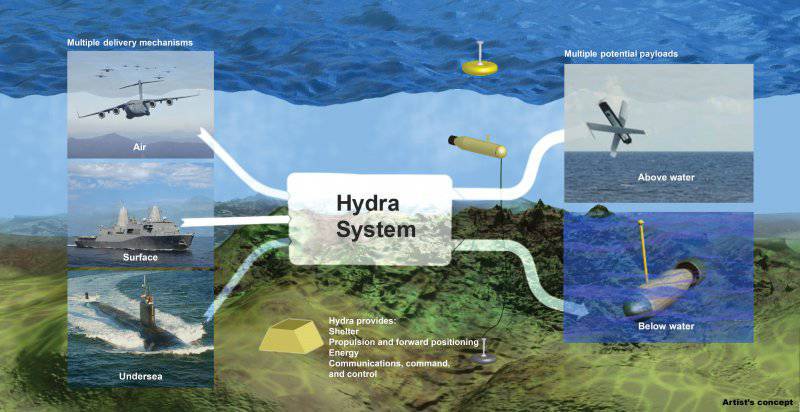 An interesting fact is that the name of the program, taken from ancient Greek mythology, fully corresponds to the look of the finished complex. The result of the Hydra program should be the creation and deployment of a network of universal unmanned platforms with different payloads. Like the heads of the mythical Hydra, the Hydra platforms will be able to follow relatively large water areas. This system is expected to allow monitoring of important areas and taking appropriate action if necessary. It is assumed that the vehicles created during the Hydra program will be able to take on part of the work of the naval forces. This will not only ensure the presence of the US Navy in all the necessary regions, but also reduce the cost of operating ships and numerous trips.

Currently, the Hydra program is in its very early stages and therefore most of the information about it concerns the economic aspects. It is emphasized that a complex of unmanned vehicles is a highly profitable way to ensure the presence in the right areas of the oceans. In addition, even a large group of autonomous vehicles capable of tracking a relatively large area will cost the budget much less than a ship connection with similar monitoring capabilities. As for combat operations, unmanned vehicles may be able to carry some weapons. It is also proposed to use them exclusively for reconnaissance purposes, at the time it is necessary to tighten full-fledged ship connections to the dangerous region.

The technical appearance of the devices created in the course of the Hydra program has so far been defined only in very general terms. It is assumed that these will be small (in comparison with the ships of the naval forces) unmanned submarines or something similar to them. Already it is argued that the payload of the devices will be done on a modular basis. Thus, most of the units of unmanned vehicles will be unified, and the remaining equipment will be mounted in accordance with the goals and objectives of the specific product.

Unified parts of the apparatus must ensure the performance of the target equipment for a long time. The required working life has not yet been determined, but it is already clear that each of the Hydra devices will have to work from several weeks to several months. The main payload at the moment are modules with surveillance and reconnaissance systems. In the future, it is expected to expand the range of usable target modules.

The dimensions and technical aspects of the operation of the Hydra apparatuses must be such that they can be transported and applied by carriers of various classes. It is assumed that the delivery of vehicles to the desired area and discharge into the water will be conducted by ships, submarines and aircraft. Because of this, there are not only requirements for the size and weight of the devices, but also restrictions on the complexity of operation. Ideally, all service should consist only in loading the program of actions and receiving the information collected by the apparatus. A variant with a remote control is also considered, which will allow to control the movement of one or several vehicles.

The use of standardized vehicles with various instrumentation equipment is expected to provide an opportunity to create a unified monitoring system for underwater and surface targets, as well as for airspace in the area where the group of unmanned systems is located. In practice, this will allow both to ensure the presence in the required area, and to increase the operational radius of the ship connections. In the latter case, the devices of the Hydra system will become a kind of replacement of the radio-acoustic buoys used to search for submarines, but at the same time having great potential for finding targets.

As a result of the successful completion of the Hydra program, the US Navy will receive a convenient multipurpose tool for monitoring the necessary water areas without the involvement of ships and submarines. It is already clear that such systems are quite capable of fulfilling their main goal, namely the realization of presence without extra expenses for organizing hikes. However, the stated requirements for unmanned vehicles and their payload can adversely affect the course of the entire program.

Creating technology with such characteristics may be too expensive for the current US military budget. Hydra devices must be in one place for several months, monitor the situation and transmit information to the command post. In addition, it is necessary to observe not only the water, but also the airspace, which greatly complicates the equipment and operation of a large number of devices for various purposes. Thus, the development of promising multi-purpose underwater vehicles alone can cost a fairly large amount. Another equally important and unpleasant aspect of the Hydra program will be the fact that quite complex and expensive devices are not likely to be reusable. This will also negatively affect the financial aspects of the program.

Nevertheless, the massive use of Hydra systems will save on the operation of reconnaissance ships, anti-submarine aircraft, etc. equipment designed to monitor the waters. These savings in the future may cover at least part of the cost of developing a Hydra project, building a sufficient number of unmanned vehicles, and equipping carriers with appropriate systems. Because of this, it is currently not possible to talk with certainty about the specific prospects of the program.

Another reason that the future prospects of the Hydra program remain questionable is the current state of the project. In early August, the DARPA agency held a meeting of specialists at which the proposed concept was discussed. The meeting resulted in the development of basic requirements for projected unmanned vehicles. In the near future, experts will continue to analyze the opportunities, prospects and risks. The next session on Hydra is scheduled for October 22.

The timing of the implementation of the program - if it is not recognized as unpromising and the development of a technical project begins - is still in question. The second half of the current decade is referred to as the approximate starting time for the operation of the first prototypes of unmanned vehicles. Full operation of the Hydra system can begin no earlier than 2018 of the year. Thus, the practical application of promising multi-purpose underwater unmanned vehicles is still a matter of a sufficiently distant future. but news on the progress of the project itself will appear in the near future. At the end of October, it will become clear whether the Pentagon will support the new project of the DARPA agency and, as a result, whether it will use the multi-headed marine “Hydra” in the future.