11 September 2013
29
For all history small weapons A huge variety of systems have been developed. The sleeveless weapon is quite interesting, but if you ask interested people about it, many will take as an example only the German machine G11. Probably, someone will remember that the Germans were developing a light machine gun and a PDW submachine gun for the same cartridge. A person studying the history of weapons in depth will cite as an example the competitors of this system - Mauser and Diehl, who participated in the same competition. For this weapon was used ammunition, which is a bullet pressed into a parallelepiped made of explosives. For the American MBA Gyrojet pistol, also related to the caseless weapon, so-called reactive bullets were used. 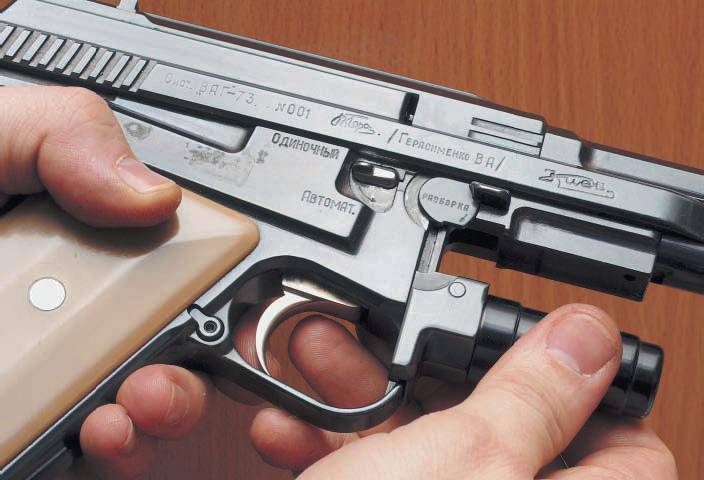 In addition, another version of ammunition was used - it consists of a head part (metal) and a hollow thin-walled rear part, made in the shape of a cylinder. The rear part serves as a sleeve inside which a propellant powder charge and a burning capsule (charge of a flammable substance) are placed. The cartridges of this type are used in the Benelli CB-M2 submachine gun (Italy) and in the experimental submachine gun design of the Zhetesov RPG-005 (Kazakhstan).

It can be summed up: when it comes to caseless weapons, experts recall many countries, not the USSR or Russia. But this is unfair - in the Soviet Union developed such systems.

At the end of the 1980-s, the Kiev State Security Committee handed over a pistol to the Weaponry funds of the St. Petersburg Artillery Museum without any accompanying documents. This weapon was developed by Vladimir Alekseevich Gerasimenko (1910-1987) and had a highly unusual design.

The emblem of Arsenal, a plant that was engaged in optical aviation systems for space and aviation.

At this plant, Vladimir Alekseevich worked with 1942, the design engineer. Gerasimenko, on his own initiative, developed and designed combat and sporting pistols, while his work was carried out under the supervision of the KGB. Over the years, he developed about 20 experienced weapons and obtained 7 certificates for inventions. Interestingly, Gerasimenko did not have any weapons education.

At the beginning of the 1970-s Gerasimenko designed and manufactured automatic guns VAG-72 and VAG-73 under the 7,62-mm cartridge-less cartridge.

The gun itself has quite impressive dimensions and mass - with dimensions of 235x135x28 mm its weight is 1,2 kg.

The trigger mechanism allows you to make a shot of self-cocked or with a preliminary cocking of the trigger. In the gun there is no external safety device, but there is a two-way translator of firing modes. Both single shots and bursts can be fired. 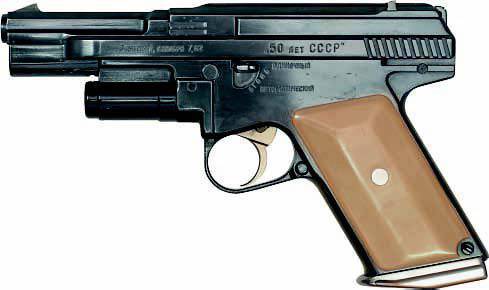 The receiver unit with the frame of the pistol is connected with a vertical pin fixed by a transverse axis.

The AVH-73 has a rather interesting power system. The “tandem” magazine holds 48 cartridges (in the VAG-72 store - the 24 cartridge). In fact, these are two stores, placed one behind the other in a single package with separate supply springs. Shops of this type are also used in the Russian OZ-53 submachine gun.

Sending the cartridge to the chamber took place according to the following scheme: with the magazine attached and fully equipped, when retracted to the rearmost position of the bolt, the gate larva goes behind the ammunition in the front compartment of the shop, and the larva feeder behind the ammunition in the rear. During the movement of the bolt to the front position, the front cartridge is fed by the larva into the chamber, and the cartridge from the rear compartment of the magazine takes its place. 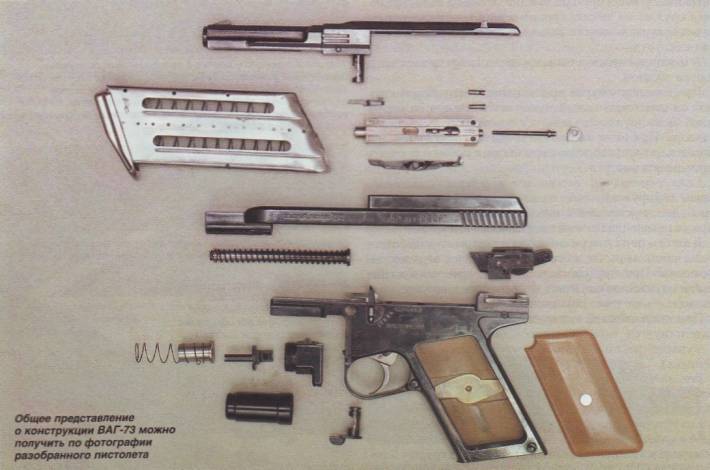 Thus, during the shooting, cartridges from the back of the magazine were first spent. Each cartridge was first fed to the place of the upper cartridge of the front of the store, and only then, during the next reloading cycle, into the chamber.

Ammunition from the rear compartment of the store was attacked by the gate larvae feeder.

The larvae feeder after 24 shots (using up all the ammunition in the back of the magazine) without meeting a cartridge in its path, worked to idle. At the same time, the front part of the larva during each cycle fed into the chamber of the cartridge from the front of the store.

In order to provide effective aiming in automatic mode, the VAG-73 design is supplemented with a pneumatic moderator (it is absent in the VAG-72). The retarder slowed the bolt when it rolled forward, which made it possible for the pistol to return to the aiming line when firing bursts.

The design of the pneumatic moderator is quite simple. There is a valve opening in front of the cylinder.

During the movement of the shutter starts to back its lower part interacts with the moderator lever, which moves the aluminum piston forward. At the same time, the air in the cylinder leaves through the valve located in the front part - a vacuum is formed. During the roll-up of the bolt, he encounters the other lever arm of the moderator on his way and, overcoming the resistance of the cylinder held by the vacuum in the cylinder, continues to move. As a result, the shutter moves a moment later to its most forward position. This is quite enough for the pistol to return to the line of sight before the next disruption of the trigger during automatic shooting. 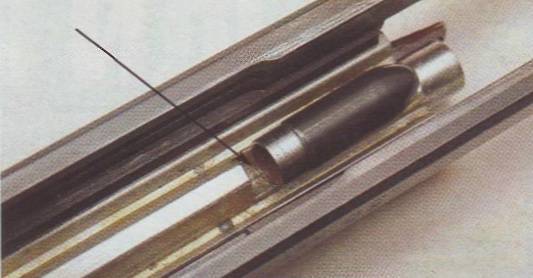 When the trigger is cocked while pulling the trigger, it presses the front of the two shoulders lever on the left side of the shutter larva. Pressing occurs through the movable pusher. At the same time, the rear part of the lever lowers, presses the sear, the trigger breaks off from the platoon - a shot takes place.

If the translator is set to single-fire mode, after the shot, the trigger pusher with the lever's front lever moves downward when the shutter returns.

Pneumatic moderator is quite simple in design. Well visible valve hole in the front of the cylinder

When the trigger is pressed in the automatic mode, the pusher, pressing the lever, is fixed in the upper position. During the forward movement of the bolt, the lever stumbles upon a pusher and its front part rises — a sear is lowered, a shot occurs.

Part of the firing mechanism with a mainspring, a sear and a trigger is easily removed from the frame. When fired with an unvoiced trigger, the thrust located inside the frame of the pistol is activated, which connects the trigger and the trigger. 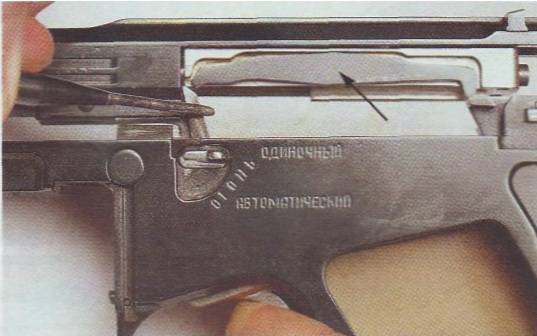 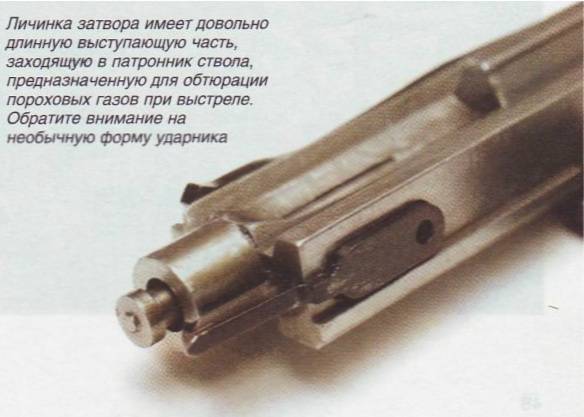 Ammunition to the pistol Gerasimenko VAG-73

For bezgilzovyh systems used several types of ammunition. This may be a bullet pressed into a parallelepiped of an explosive (German automatic G11) or the so-called reactive cartridges (American MBA Gyrojet pistol).

The bullet to the guns Vah belong to the third type. Also, these munitions are called a cartridge with a "flying away" sleeve. The ammunition consists of a metal head and a rear hollow thin-walled part, made in the shape of a cylinder (cup). Inside the back of the cartridge, there is a propellant powder charge and a burning capsule (there is a thread for screwing it in) - a charge of a flammable substance, that is, it serves as a sleeve. 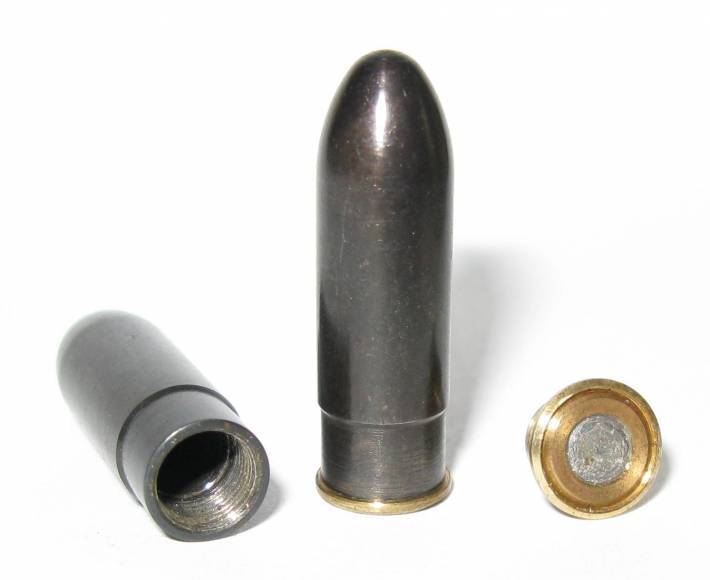 Cartridges having a similar design are also used for the Benelli CB-M2 submachine gun (Italy) and the experimental submachine gun pistol of the design Zhetyosov PPZH-005 (Kazakhstan).

At first glance, cartridges for VAG pistols raise legitimate questions. Made of steel, they should “eat” the barrel after several dozen shots, but brass cork, screwed into the bottom of the bullet, prevents this. The function of the leading element performs a speaker belt. A similar master device is available in the artillery projectile and the PPS bullet.

In some sources, VAG ammunition, referring to the features of the classification, even in spite of a small caliber, is counted as a projectile. The use of a thick steel shell in the construction is explained by the need to eliminate its expansion by powder gases, and hence friction against the walls of the barrel during a shot. 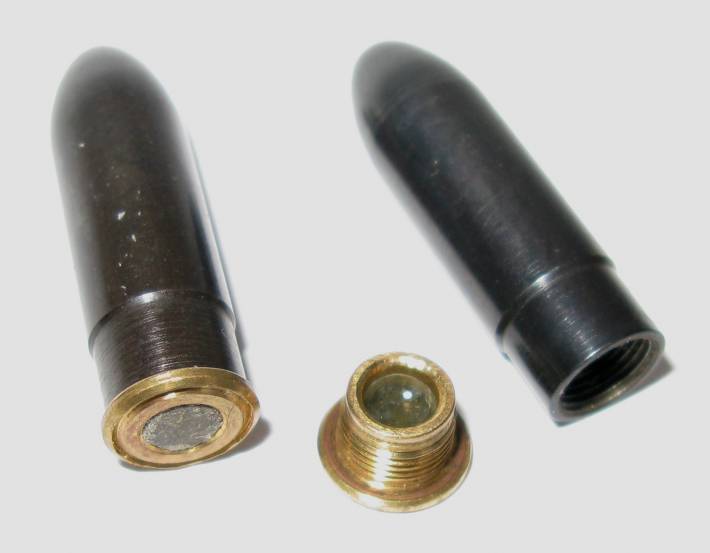