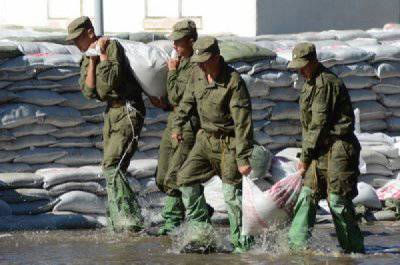 In the Far East, there is an emergency situation associated with the overflow of rivers. In some flood regions, the water level gradually decreases, in others, on the contrary, it grows. However, despite all these changes, the overall situation remains complex and requires appropriate action. So, as of September 10 morning, according to official data of the Ministry of Emergency Situations, 7 settlements remain flooded in the Amur Region. They are flooded 266 residential buildings with a population of 1369 people. In addition, 26,5 kilometers of highways and 69 bridges are under water. In the Jewish Autonomous Region, 20 settlements - 1175 houses and 3830 people suffer from floods. Almost 130 kilometers of roads and 7 bridges are flooded. The worst situation persists in the Khabarovsk Territory, where the spilled Amur River flooded 74 settlements. Because of this, 2760 houses, which were home to more than 29 thousand people, were flooded partially or completely. A message was broken on road sections with a total length of 66 km and on four road bridges.


Such a flood scale led to the fact that not only employees of the Ministry of Emergency Situations, but also military personnel were involved in the evacuation, accommodation and assistance to the local population. A total of six regions of the Far Eastern Federal District employ more than 46 thousand people and almost 7,5 thousand units of equipment. At the same time, only 11,5 thousand people and 1621 units of equipment participate in the works from the Ministry of Emergency Situations. Much of the work was undertaken by the Ministry of Defense. The servicemen of the Eastern Military District take an active part in the evacuation and accommodation of the victims, in creating the necessary infrastructure, etc.

It should be noted that the number of military personnel and army equipment involved in helping the population is constantly increasing. So, on September 9, according to the press service of the Ministry of Defense, the military transport aviation made 29 sorties in Komsomolsk-on-Amur, delivered there 46 units of equipment, personnel and various cargoes. Army aviation on the same day transported more than 20 tons of cargo. September 4, it became known that two heavy Mi-26 helicopters will participate in cargo transportation. These rotorcraft from the Central Military District aviation were temporarily deployed to the Far East. 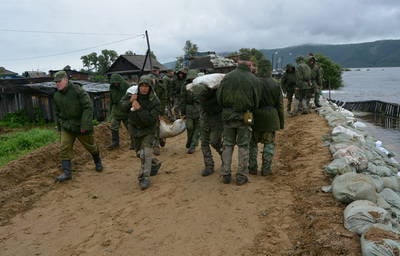 The situation in Komsomolsk-on-Amur is gradually deteriorating, and the Ministry of Defense has to take appropriate measures in this connection. Currently, there are active shipments of equipment and people to this city. Thus, in the first days of September, a dozen and a half units of heavy machinery were transferred to Komsomolsk-on-Amur: dump trucks, bulldozers, excavators, etc. Later, several more vehicles of this destination were delivered to the city. The military personnel of the Eastern Military District set up tent camps for evacuated people, food outlets, water purification systems, medical facilities, etc. necessary objects.

To date, military personnel in the Amur Region, the Jewish Autonomous Region, and the Khabarovsk Territory have deployed 9 catering centers capable of fully providing up to 5 thousand people. Catering facilities accept victims currently living in tent camps. Army units use the KP-130 field kitchens and the PAK-200 mobile car kitchens for cooking. In addition, field bakeries operate at the points of supply. To date, these complexes in total have baked about one and a half tons of bread.

The water has already left some of the affected areas, which is why troops of radiation, chemical and biological protection work there. These units are involved in the restoration of some elements of the infrastructure. Specialists of the RCBZ troops disinfect the areas that were under water, process the wells and help the local population in clearing farms.

Another way to prevent possible mass diseases is to monitor the sanitary-epidemiological situation and vaccination. Over a dozen mobile laboratory groups visit dozens of places every day and collect a large number of water samples. Samples are transferred to specialists of the 736-th Main State Sanitary-Epidemiological Surveillance of the Ministry of Defense, working in several villages of the affected regions. Vaccination of the population and the participants is also being carried out. Currently, about 25 thousand people have been vaccinated against hepatitis A only.

Due to the flooding of a large number of roads, various boats became the main means of transportation in the affected areas. Currently, in the Amur and Jewish Autonomous Regions, as well as in the Khabarovsk Territory, a large number of towing and motor boats BMK-130 and BMK-460, as well as floating conveyors PTS-2 operate. Such vehicles now account for a significant part of freight and passenger traffic. So, in one day 9 of September, boats and floating conveyors transported 1180 people, 262 ground vehicles and 1985 tons of various cargoes. In total, 18 transporters PTS-2 and 39 boats of two types operate in the flood areas.

The military personnel of the Eastern Military District during the rescue operation not only evacuated residents, but also helped to build a temporary transport infrastructure. To date, the Ministry of Defense in the affected areas has built 3 bridges, 4 ferry-bridge ferries and 18 ferries, which use floating conveyors. Since the beginning of the operation, the military took out more than 20 thousand people, more than 4 thousand vehicles and a little less than 12 thousand tons of various cargoes from the flooded areas. 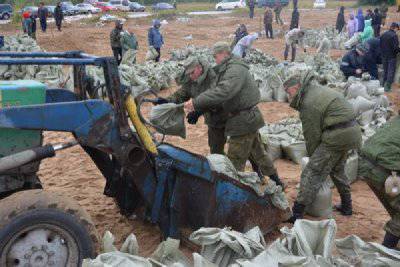 Currently, the military of the Eastern Military District are involved in all activities related to the elimination of the consequences of flooding and assistance to the victims. Forecasts for the near future do not allow us to hope for an early completion of the flood. Therefore, in the coming days or weeks, soldiers and officers will have to continue to provide assistance to the victims. In addition, one should not forget that the first frosts will soon begin, and this will only aggravate the situation in the affected regions. Thus, the operation to assist the local population may take several weeks or even months. The main problem in this situation is the uncontrollable nature of natural processes. While it is impossible to say exactly when the water will leave all the affected settlements, which greatly complicates the planning of further work. However, there is no choice. EMERCOM officers and military personnel of the Eastern Military District continue to work at the site of an emergency situation and help the victims.