Russia is working on the creation of "Air start"

6 September 2013
78
After 2-3 years, the Russian aviation a space missile system being developed as part of the Air Launch project, can conduct the first tests. The latest version of the Air Launch ARKK was presented at the MAKS-2013 air show held in Zhukovsky near Moscow. The implementation of this project is carried out by the State Rocket Center (GRC) named after Makeev, who is developing it together with the private company Polet. The leading specialist of the GRC, Sergey Egorov, in an interview with the Rosinformburo website noted that in 2-3 years everyone will know about us. According to Yegorov, the Polet company is ready to provide its An-124-100 Ruslan aircraft for practical testing. At the initial stage of testing, using the mockups, the discharge of cargo from the aircraft and the initial stages of launch will be worked out.


Sergey Egorov noted that interest in this innovative project has increased, including from the Russian Ministry of Defense, and in this regard, he expressed hope for achieving good results. The specialist believes that this project can be used to launch military satellites into space. “Air Launch” is a project that is a system that is able to put space vehicles into Earth orbit using an environmentally friendly fuel booster rocket, which starts from a large transport aircraft A-124-100.

“Ruslan” with a missile on board, which is located in a reusable container, in a given area at an altitude of about 10 000 meters performs a “hill”. At this point, the rocket is ejected from the container with the help of a steam and gas generator, at a distance of 200-250 meters from the aircraft, the cruise engine is turned on and the controlled flight to the specified orbital path begins. Specialist SRC them. Makeeva stressed a number of the main advantages of the complex with this method of launch. First of all, it is the absence of the need to build expensive launch ground complexes, the use of different launch areas, advance planning of the exclusion zones to drop the detachable stage of the rocket, as well as the possibility of increasing the payload.

Currently, work on a similar project is actively underway in the United States. In America, we have already conducted several successful tests on the discharge of large-sized cargo from an airplane using a parachute. At the same time, the Russian way of leaving the aircraft with oversized cargo Sergey Egorov considers it safer and more reliable. The representative of the SRC them. Makeeva believes that in our case, an unaccented and controlled dumping of the “Flight” missile (mass of 102 tons, length over 30 meters) with the necessary overloads is achieved. At the same time, the parachute method is less predictable and is only suitable for rockets that have lower weight and size characteristics. 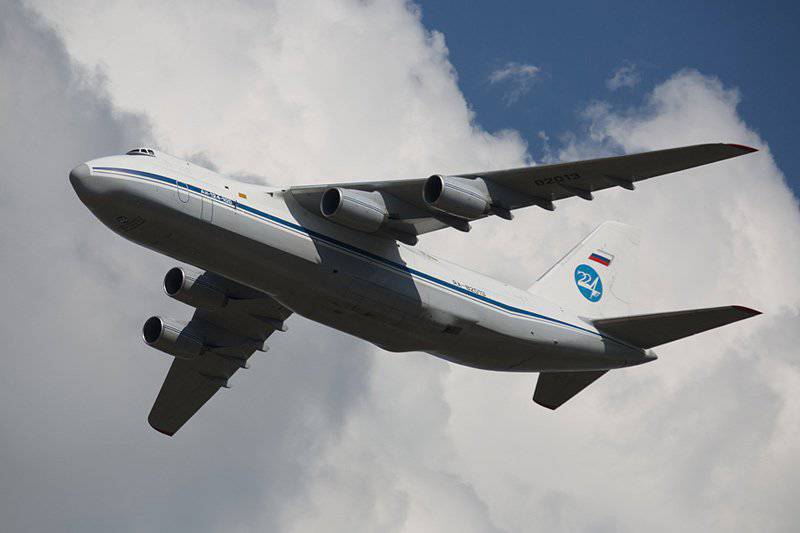 In Russia, space-based air-launched launch vehicles began to be designed in the middle of the 90s of the last century by several organizations simultaneously. Further, all managed to advance the development, which was initiated by the Chemical and Automation Bureau and Polet Airlines (both companies from Voronezh), which in May 1999 of the year established the Air Launch Corporation of the same name. The shareholders of this company soon became GNPRKTS TsSKB-Progress (Samara) and RSC Energia (Korolev, Moscow region). However, these enterprises in the beginning of 2000-s left the corporation, and their place of lead developer took them the SRC. Makeeva (Miass, Chelyabinsk region).

The meaning of the project is to ensure the mobility of space launches, since there is no need to build a cosmodrome when launching a rocket from an aircraft. From the very beginning of the project the heavy transport aircraft An-124-100ВС "Ruslan" was to be the main element of the complex. In the center of Russia in Samara, on the basis of the airfield of the company “Polet”, it was supposed to organize some kind of “cosmodrome”.

In 2006, the project became international: at the intergovernmental level, an agreement was reached with Indonesia, which pledged to build on its island Biak all the necessary infrastructure for the deployment of Ruslan aircraft and loading missiles on them. In September, 2007, the information appeared that the ambitious project entered the home straight. The first launch was being prepared for the 2010 year, and a contract was signed with one of the Western European companies to launch 6 satellites. However, since then about the "Air Start" as if forgotten.

We remembered him again in the 2012 year, when the SRC them. Makeev was able to enlist the support of the Ministry of Industry and Trade, the Ministry of Economic Development, and the Federal Space Agency. Then there was information that the implementation of this project will require investments 25 billion rubles. At the same time, the construction of the “demonstrator” was estimated at 4 billion rubles, while the total costs within the framework of the development of the Air Start system were estimated at 25 billion rubles (the creation of the demonstrator was up to 3 years, the project implementation was 5-6 years).

The Russian Air Start system using the Polet launch vehicle belonging to the light class (weight about 100 tons) is able to ensure the launches of light satellites to low (up to 2 thousand km.), Medium ones (10-20 thousand. km.), geosynchronous and geostationary orbits, as well as departure trajectories to the Moon and planets of our Solar system. The project provides for launching a launch vehicle with satellites on board from altitudes in 10-11 thousands of meters from an air launch platform, which is planned to use a modification of the world's heaviest commercially produced transport aircraft An-124-100 "Ruslan", which was created in 1983, the Ukrainian state enterprise ASTC them. OK. Antonov.

Also part of the system is the Polet light launch vehicle, which is created using the most advanced rocket technologies that were created in Russia as part of the manned program of the Soyuz launch vehicle and confirmed its high safety and reliability. In this case, the booster will operate on environmentally safe rocket fuel (kerosene + liquid oxygen).

At the first stage of the rocket, modified liquid rocket engines NK-43 (NK-33-1) are used, which were created as part of the work on the lunar rocket H-1 and worked out to the reliability of 0,998. As the second stage of the Polet rocket, it is planned to use the third stage of the mass-produced Soyuz-2 rocket with an improved RD-0124 rocket engine.

At the initial stage of the operation of the Polet missiles, in order to minimize costs and reduce the time spent on its development, the propulsion system of the first rocket stage can be taken to be similar to the installation of the TsSKB-Progress developed at the first stage of the light Soyuz-1 launch vehicle: with existing main engine NK-33А and steering 4-chamber engine РД 0110Р. 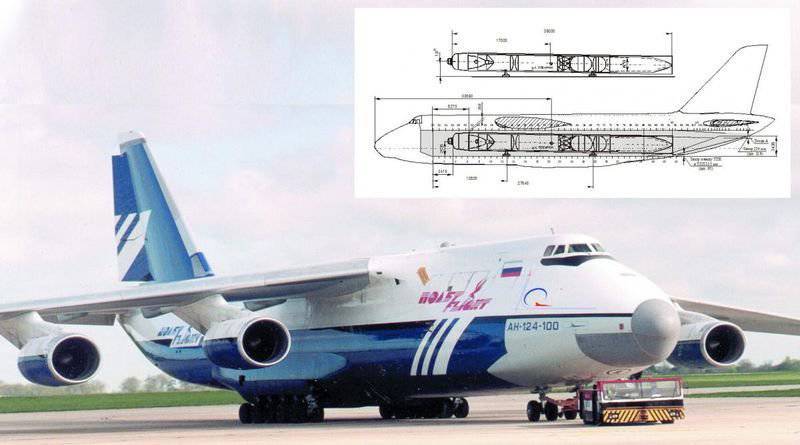 For delivery of space satellites to orbits of various heights and departure trajectories, the launch vehicle can be equipped with an accelerating unit, which is an improved modification of the upper stage “L” of the Molniya launch vehicle, with oxygen-kerosene rocket engines 11D58MF installed on it (5 tc rocket) . Work on this engine is currently underway at RSC Energia. S. p. Queen.

The use of existing Russian rocket technologies in the High-altitude launch project can have a positive impact on the timing and cost of developing the system, providing it with the best economic and technical characteristics. The construction of the Vostochny space center can become the best option for locating the created system on the territory of our country. The proximity of the Pacific Ocean provides the best conditions for selecting the optimal routes on the active part of the flight of the Polet launch vehicle.

After the Polet launch vehicle and the upper stage are delivered to the Russian Vostochny space center or to the space port on an Indonesian island, the launch vehicle and the satellite are integrated. The installation of a satellite on a rocket can be carried out in a technical complex specially built at the spaceport or directly in the aircraft itself. After the completion of the assembly process of the launch complex and the carrying out of all necessary checks, refueling of the aircraft carrier, space upper unit and the rocket, the aircraft takes off to the calculated launch area.

The flight pattern of this system provides launching satellites into Earth orbit with almost any inclination. This is achieved due to the fact that the aircraft can launch a rocket at a distance of thousands of kilometers in 4-4,5. from the spaceport. At the same time, the launching zone of the rocket when planning each specific flight will be selected based on the conditions for ensuring a given inclination of the orbit of the space satellite, the location of the flight path and areas of incidence of detachable rocket elements in low-navigable waters of the World Ocean. Also, when choosing a launch route, the need for landing of “Ruslan” after launching the launch vehicle will be taken into account at one of the nearest airfields, which is able to receive planes of this class. 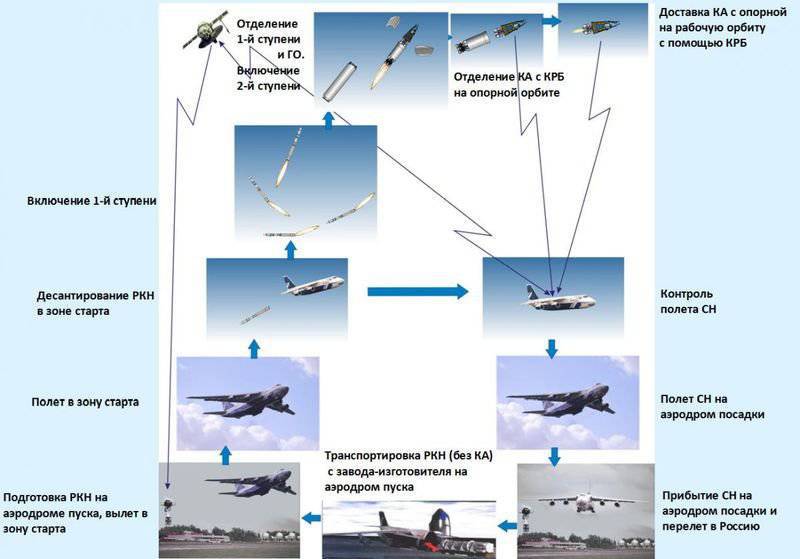 In the calculation zone of the launch of the rocket to create the most comfortable initial flight conditions, the aircraft carries out an aerobatic flight called a slide with access to a parabolic trajectory, which allows for a flight mode that is close to zero gravity for 6-10 seconds. At this moment, the normal overload on the “Flight” missile will not exceed the 0,1-0,3 units. This solution allows 2-2,5 to increase the missile mass of the times as compared with the ordinary landing in horizontal flight mode, and thus increase its carrying capacity.

At the moment when the carrier on the “Hill” mode reaches the maximum angle of inclination of the trajectory to the local horizon (cabling angle of the order of 20 °), the missile is ejected from the aircraft using a special launch container using a pneumatic ejection system equipped with a powder pressure accumulator. The process of the launch of the “Flight” from the “Ruslan” takes about 3 seconds, the longitudinal overload at this moment does not exceed the 1,5 unit. After the procedure of landing a rocket and the subsequent implementation of the flight segments of its first and second stages, as well as of the space upper stage, the space satellite is separated and its exit to a given orbit.

It is worth noting that the technology of landing heavy loads from an aircraft, which are significantly larger than cargoes that are dropped in normal horizontal flight, was implemented in the USSR in 1987-1990 in the framework of the Energy-Buran program. This technology was developed within the framework of the rescue of reusable energy rocket units of the first stage of the “Energy” rocket and provided for the landing of heavy loads in airplane flight modes close to weightlessness.

The use of the Polet launch vehicle allows launching satellites weighing up to 4,5 tons into orbit when they are launched into low equatorial orbits, up to 3,5 tons - into low polar orbits, up to 0,85 tons - into orbits of GLONASS or Galileo navigation systems, up to 0,8 tons - to geostationary orbits. In the case of equipping geostationary satellites with an apogee propulsion system, which ensures the transition of a satellite from a geo-transmission orbit to a geostationary, the Polet light rocket can provide satellites with a mass up to 1 tons to a geostationary orbit. On departure trajectories to other planets of the Solar system, as well as to the Moon, it can deliver spacecraft with a mass of 1-1,2 tons. Such opportunities for the “Air Launch” loading capacity are provided by starting from a height of about 10-11 thousands of meters.

Ctrl Enter
Noticed oshЫbku Highlight text and press. Ctrl + Enter
We are
Underwater launch systems: how to get out of the water into orbit or into space?Air launch remains in the plans of the Pentagon
Military Reviewin Yandex News
Military Reviewin Google News
78 comments
Information
Dear reader, to leave comments on the publication, you must to register.