In Japan, launched the largest warship since the war

4 September 2013
31
On August 6, 2013, on the anniversary of the atomic bombing of Hiroshima, the largest Japanese warship since the Second World War was presented in Yokohama to the general public fleet. We are talking about the "destroyer-helicopter carrier" type 22DDH, the tail number of the ship DDH-183. This rather lengthy and local classification is hiding a full-fledged helicopter carrier, which in its size and all its appearance resembles a small aircraft carrier at all. The total displacement of the ship is 27 thousand tons, and the length is 248 meters. The ship is due to enter the Japanese Self-Defense Forces in 2015 and is the first in a series. The second ship under this project will be laid in January 2014, it will enter the fleet in 2017.


The ship got its name from the ancient Japanese province, as well as in honor of the cruiser during the Russian-Japanese war. In fact, both in design and displacement, this is a large modern helicopter carrier, which can be turned into a light aircraft carrier in just a few months with minor modifications. To do this, the ship has a flat flight deck across the entire hull with a length of almost 250 meters, and the command superstructure is shifted to the starboard side of the ship. 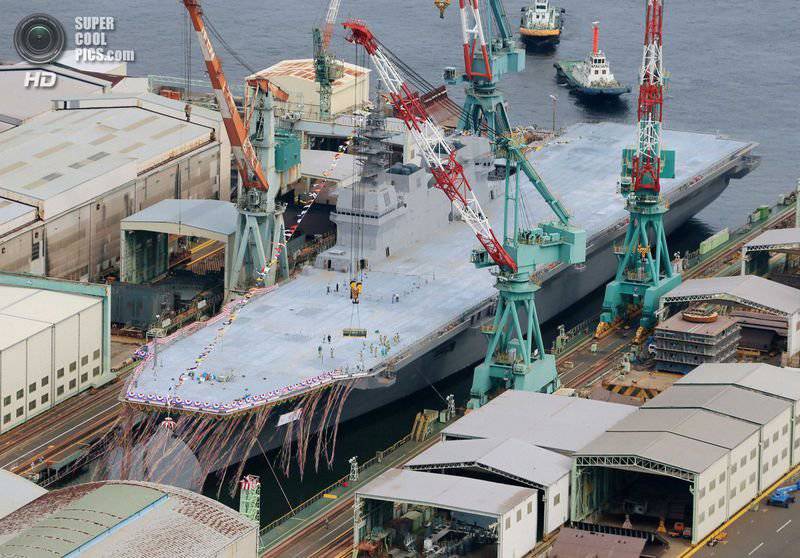 It should be noted that Izumo is already the 3-th helicopter carrier as part of the Japanese Navy. At the same time, launching a new ship of this class did not come as a surprise to the neighbors of Japan, as some media outlets say. Regarding the publication of budgets for the construction of ships, Japan is a fairly open country. Also here are published the main characteristics of all newly laid courts. In press, in particular, it was reported that in May 2006 of the year the first of them was laid - 16DDH. Already in August 2007, the ship was launched and received the name "Hyuga", in April 2009, he officially joined the fleet.

Even then, experts noted the discrepancy in the marking of the “Hyuga” class and its actual appearance. In terms of its displacement, the "Huga" destroyer "was in 3 times more than the usual destroyers. He had a solid deck from bow to stern and superstructure displaced to the starboard, just like all aircraft carriers. Therefore, the “Hyuga” was immediately considered by many experts as a universal landing craft, and some even as a light aircraft carrier. The flight deck was almost 200 meters long and the total displacement of thousands tons in 18 was in favor of such assumptions. The helicopter carrier could take on board 11 helicopters for various purposes. In this case, the task of landing troops from the board of the "Hyuga" had already been worked out at the exercises, including with the involvement of American marines. The second ship of the same type from Hyug was laid in Japan in May 2008, it was launched in March 2011 of the year and received the name Ise.

The new Izumo helicopter carrier is able to ensure the simultaneous take-off and landing of 5 helicopters, it can carry up to 14 rotary-winged aircraft for various purposes. "Izumo" can be used as a supply ship, in particular to carry out refueling of other combat ships operating together. The equipment installed on it allows it to be used as a floating headquarters during rescue operations both abroad and in Japan itself. On board the ship has its own hospital, designed to receive 35 patients. 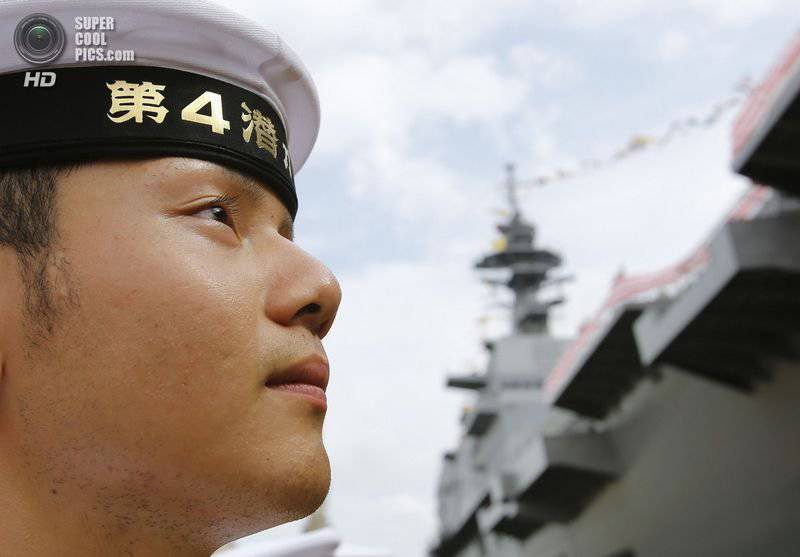 The aircraft group of the ship may consist of various helicopters 14, its typical composition - 7 anti-submarine helicopters and 2 search and rescue. In the foreseeable future, the basis for the mission of the ship should be the fight against submarines probable enemy. At the same time, it also has the capacity to transport troops. On board it can accommodate up to 400 paratroopers, as well as up to 50 trucks weighing tons in 3,5. There are, of course, quite limited opportunities for landing troops on board the Izumo, but here it is worth recalling the recent joint Japanese-American exercises, during which the V-22 helicopter landed onto the deck of the Izumo predecessor, the helicopter carrier of the Hyuga type. Osprey.

Practically in all articles and notes about the new Japanese ship, the possibility of using the F-35B Lightning 2 vertical take-off and landing aircraft from its deck is discussed. Japan ordered the land modification of this newest American fighter with the usual takeoff and landing as early as December 2011. Despite the fact that the length of the Izumo flight deck allows you to use the F-35B even without installing a springboard, the ship would still need substantial reworking - probably strengthening elevators of aircraft lifts, covering the deck with heat-resistant materials, installing systems for landing automation. At the same time, these problems are not technically insurmountable, so the question of the return of helicopter carriers to the Japanese navy lies primarily in the area of ​​politics.

The reaction of neighbors

The ship’s dimensions and appearance made it possible for many experts to say that a full-fledged aircraft carrier is being created under the guise of an anti-submarine helicopter carrier in Japan, which in the future can accommodate fifth-generation fighter jets - the American F-35 with a vertical take-off and landing system. At the same time, the Japanese Self-Defense Forces have so far claimed that they are not going to retool the ship. Moreover, the possession of its own aircraft carriers is not allowed by the pacifist constitution of post-war Japan. 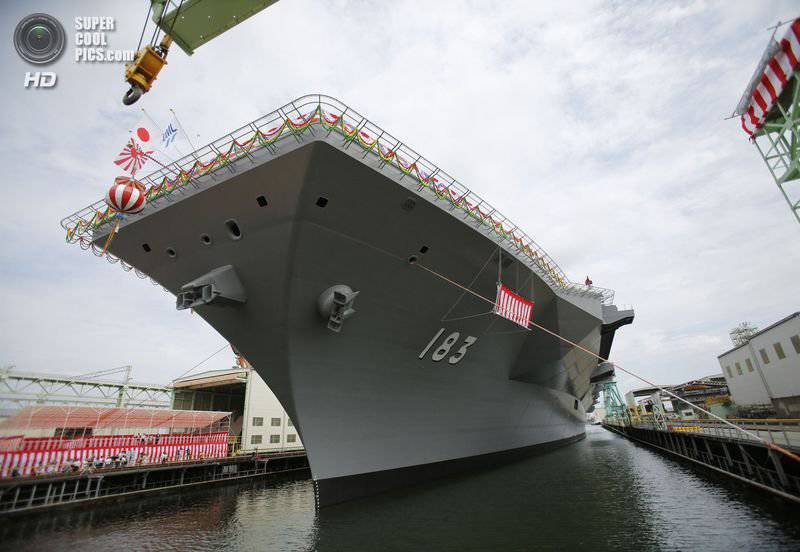 Japanese naval sailors are planning to use the new ship not only to protect their borders, but also to conduct large-scale rescue operations in the event of a repetition of natural disasters, like the earthquake in the Tohoku region in 2011. At the same time, it is precisely the launching of the Izumo, in the form of a new argument on the issue of borders, that is particularly acute in the relations between Japan and China. Currently, these two states are contesting the right to Senkaku Islands (Diaoyu). In fact, the response to the launch of a new Japanese helicopter carrier was the appearance in the area of ​​disputed islands of ships from the marine police of the PRC.

Currently, Japan already possesses a navy, which experts recognize as one of the best in technical equipment and in training personnel among the fleets of all countries in the region. At the same time, Japan did not have the strength and means to carry out full landing operations. This deficiency can be partially eliminated by the introduction of new “squadron-destroyer-helicopter carriers” into the fleet. However, the operation of landing operations is currently “hindered” by the Constitution of Japan, which restricts the activities of the Japanese armed forces only to defensive functions, and this in turn does not allow the rising sun to build aircraft carriers. For the same reason, many believe that Japan is building aircraft carriers under the guise of helicopter carriers.

The ruling circles of Japan officially declare that the country does not carry plans for the use of Izumo for offensive purposes. Despite this, according to reports by Japanese correspondents, neighboring countries, in particular South Korea and China, reacted very negatively to news about the launching of another helicopter carrier in Japan. This is evidenced by the publication of correspondents of the newspaper "Asahi" from Seoul and Beijing. In particular, they talk about the harsh negative reaction of the media of these two countries to the growth of the combat power of the Japanese fleet. In these states, this is regarded as a "turn on the militaristic course of development." 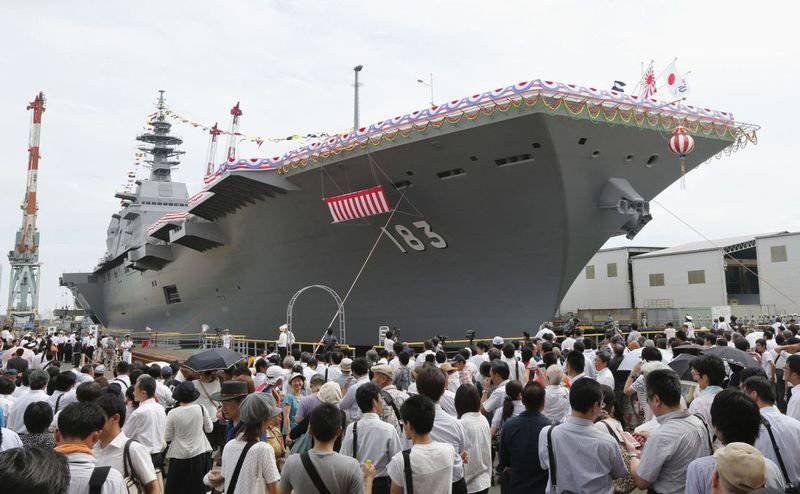 A correspondent for the Japanese newspaper Asahi in Beijing writes that Chinese journalists take pictures from the launching ceremony of the new helicopter carrier into the front pages of newspapers and call the Izumo "actually an aircraft carrier." A Japanese correspondent quoted a Chinese expert who said on the central state channel that the Izumo helicopter carrier could act as a standard aircraft carrier after only two months of modernization. In the Chinese newspapers, the correspondent reports, it is said that the “offensive capabilities of the Izumo will be significantly higher after the F-35B vertical take-off and landing fighters are placed on its deck.